Jeep may be as American as apple pie, but the Compass is a global ambassador. Manufactured in Brazil, China, Mexico, and India, the compact SUV is sold in more than 100 countries around the world. Available in Sport, Latitude, and Limited trim with either two-wheel or four-wheel drive; I spent a week with the 2019 Jeep Compass Trailhawk, which has all-wheel drive as standard equipment.

This generation of the Jeep Compass launched in 2017 and enters the 2019 model year with mostly minor changes. Compass Sport models get an Upland special edition that includes a selection of parts from the Trailhawk, including 17-inch wheels, front fascia, matte black tow hooks, front suspension skid plate, and all-weather mats. Other additions for the 2019 model year include a High Altitude Appearance Package for Limited models, a new Sting Grey paint colour option, a Premium Lighting Group, adaptive cruise control added to Advanced Safety Group Package, and the inclusion of a standard 7-inch Uconnect radio on Sport and Latitude models while the Trailhawk gets an 8.4-inch system as standard.

Outfitted in Redline Red Pearl paint with matching tow hooks and interior accents, the Compass exudes rugged styling that is vastly improved over the previous generation. It may just be the best-looking compact SUV in its class. The interior is nicely appointed as well. Materials like the leather-wrapped steering wheel, shifter, and seats feel high-quality; and a massive dual-pane panoramic sunroof brings light into the cabin for a cost of $1,595. The Cold Weather Package includes front heated seats and steering wheel, windshield wiper de-icer and remote start.

Building on nearly 80 years of off-roading prowess, the Trailhawk gets an added inch of ride height, skid plates under the fuel tank, transfer case, front suspension, and transmission to protect crucial components should you venture off the asphalt. It also gets a matte black hood and unique 17-inch wheels wrapped in knobby rubber. 4x4 Compass models also feature hill-start assist and hill-descent control, as well as Snow, Sand, and Mud traction settings that modulate gearing and braking for various surfaces. Trailhawk adds a Rock mode for added capability, complimenting its 30-degree approach and 34-degree departure angle.

Ingress and egress are easy thanks to the ride height and doors that open to almost 90 degrees. The Popular Equipment Group included on the vehicle features an eight-way adjustable driver’s seat, so finding a comfortable position was quick and easy. Climate control and infotainment operation are handled through a combination of knobs, buttons, and touchscreen. The 8.4-inch Uconnect system allows for customization and navigation of the vehicle’s various settings and functions, including Android Auto and Apple CarPlay connectivity. The front centre console houses a USB port and auxiliary jack, while the rear passengers get a USB port and a 110-volt outlet. The back seat is big enough for adults, but the storage space behind the seats is not huge. This is to be expected as the Compass resides size-wise between the Renegade and Cherokee. 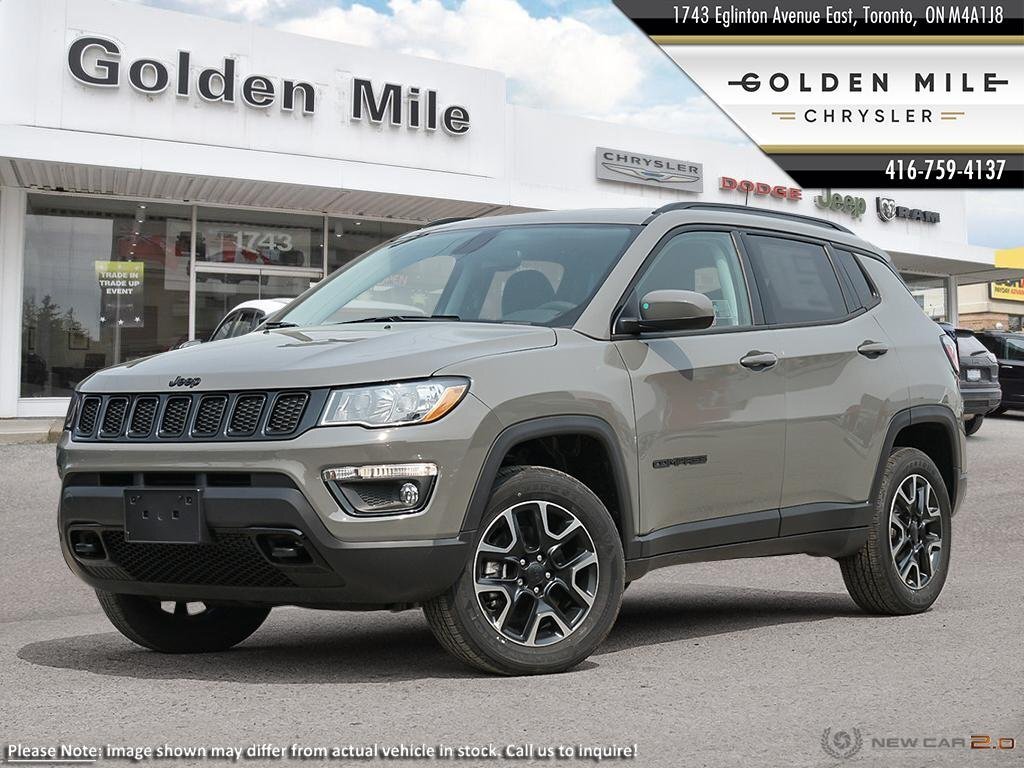 Considering most owners won’t be venturing off-road as much as they’ll be using highway on-ramps, merging onto the highway was not an enjoyable experience. Attempting to get the 1,648 kg (3,633 lb) compact SUV up to the pace of traffic as one normally would, I found myself introducing my foot to the firewall, looking anxiously into my rear-view mirror as traffic swiftly approached. The lone engine available is the 2.4L four-cylinder with a rating of 180 hp that comes at a near-redline 6,400 rpm. Programmed more for fuel efficiency than power, the nine-speed transmission always seemed to be two or three gears above where any semblance of power was. Sliding the gear shift into manual mode was the only way to wring out any performance whatsoever. The observed fuel economy of 11.6 L/100 km over the course of one week was higher than the official rating as a result. Aside from the sound of the straining engine, road noise on the highway was only moderate. The Compass felt composed, without any rattles, squeaks, or creaks.

Steering felt decently weighted at various speeds, but got twitchy during transitions and didn’t offer much in the way of feedback. Its off-road-biased tires could have contributed to the handling and braking, which wouldn’t be an issue on other models.

A vast number of Wrangler owners may never take them off the asphalt to experience the sublime off-road capability, but a case can be made for the utility vehicle soaking up road imperfections within the city. Granted, I didn’t take the Compass rock-crawling, but I do have a speed-bump- and pothole-ridden route to and from the office that I specifically use every day to reveal how each vehicle’s suspension tolerates severe road defects. The Trail Rated Compass did not shine. In fact, it didn’t even fare as well as some sports cars with firmly tuned suspensions. Traversing various obstacles at normal speeds were both abrupt and loud.

Where the Compass really excelled was within the confines of a cramped urban setting. It fit neatly within my condo parking space with plenty of room to spare, to open doors and the rear power hatch. Entering and exiting my parking space usually requires a three-point turn, but the proportions of the Compass combined with its tight turning radius may win it a prize for being the only vehicle that’s been able to zip in and out in one shot.

The $495 Trailer Tow package adds a four-pin wiring harness and a Class III receiver, rated for 2,000 lb, limiting your options to small tent trailers or toys like personal watercraft, ATVs or dirt bikes.

The Compass is a compelling option for someone looking at a compact SUV with off-road capability and legendary Jeep street cred. Urban dwellers looking for something unique in an increasingly crowded and highly competitive segment may want to look at other less off-road-oriented packages. Dropping in a more potent powerplant as an option and making some slight suspension tweaks would make the Compass a real contender.

About Dustin Woods
Fascinated by anything with an engine since he was old enough to walk, Dustin has been crafting automotive news, reviews, and travel content for over 14 years. He holds an Honours Bachelor of Arts in Communications Studies and English from Wilfrid Laurier University and a post-graduate certificate in Broadcasting from Humber College. Dustin is the Associate Editor of autoTRADER.ca, a member of the Automobile Journalists Association of Canada (AJAC), and a doting cat dad.
Follow me
You may also like
7.7