Reviews
By Sam McEachern
Easy to live with, but not easy on the wallet.
THE GOOD
THE BAD
8.0
7
STYLING
9
SAFETY
7
PRACTICALITY
8
USABILITY/ERGONOMICS
10
FEATURES
8
POWERTRAIN
9
COMFORT
7
DRIVABILITY
9
FUEL ECONOMY
6
VALUE

Maybe it’s just me, but it’s not often I’m enamoured of a piece of technology.

Home entertainment has mostly stagnated, my smartphone looks and performs the same as it did five years ago, and I haven’t felt compelled to upgrade my camera since college. In short, it’s hard to find tech that truly impresses these days.

Electric cars are, however, an exception. There’s a reason they keep popping up at electronics shows: EVs are among the most ground-breaking and impressive pieces of technology on sale today, and the same is true of the 2020 Nissan Leaf Plus.

We’ll get the styling out of the way first, since it’s probably the least exciting part about this otherwise impressive EV. The Nissan Leaf won’t be turning heads with its design, as it looks like virtually every other hatchback on the road. The aggressive front fascia is a nice evolution from the cutesy front end of the previous-generation Leaf, though, and the pointy headlights expand on the somewhat meaner look.

The black painted contrasting rear hatch is a nice touch that gives the Leaf a sportier appearance from the back, and a subtle lower diffuser – that’s the black plastic piece with the blue outline on the lower part of the rear bumper – also lends to the sporty look.

Automakers seem compelled to have their EVs shout from the rooftops that they are battery-powered, with over-the-top, futuristic styling, but not the Leaf. Other motorists will likely have no idea this car is, indeed, all-electric, and that suits me just fine. With just about every other EV trying so hard to let you know it’s electric, the Leaf provides a breath of fresh air.

The Leaf received the highest possible crash-test ratings across the board from the Insurance Institute for Highway Safety (IIHS), so owners can rest easy knowing this EV is as safe as it is silent. This generously equipped SL Plus model, which starts at $52,898, also comes with a range of standard advanced safety tech, including rear cross-traffic alert, automatic emergency braking, blind-spot warning and intervention, high-beam assist, and forward collision warning.

Nissan’s ProPilot Assist semi-autonomous driving system also comes standard on the SL trim, which is essentially a fancy adaptive cruise control that will keep the car centred in a lane on the highway and slow down and stop with the flow of traffic. The driver still needs to keep both hands on the wheel when it’s activated, but it does take some of the stress out of highway driving and traffic jams. I found the system kind of ping-ponged in the lane when activated, making small adjustments to the left and the right rather than constantly holding a straight trajectory, but it was otherwise confidence-inspiring and easy to use.

As a four-door hatchback with a decent-sized trunk and folding rear seats, making it as practical as something like the Volkswagen Golf. The battery eats up some room in the back seat, but only for those relegated to the centre seat.

And about that battery: charging the Leaf is easy – especially if you have a place to plug it in at home. I live in an apartment building, however, so I had to go out of my way to charge the car. I found a fast-charger near me that filled the battery from 10 per cent to 85 per cent in just over an hour, though it was a bit pricey at $16.22. I also used a free Level 2 charger, but it was extremely slow, only giving me about 10 per cent charge in one hour.

This range-topping Leaf SL Plus model has just about every feature you could want. In addition to the aforementioned advanced safety and driver-assistance systems, it also comes with heated front and rear seats, a heated steering wheel, heated outside mirrors, navigation, a Bose stereo, and LED headlights, among more. Oddly, a sunroof isn’t offered on the Leaf. Considering this is a compact car that rings in at over $50,000, I think a sunroof is a fair expectation. Maybe in 2021, Nissan?

Motivating the Leaf Plus along is a 160-kW AC electric motor, which is good for 214 hp and 250 lb-ft of torque. The motor delivers the immediate torque that so many EV drivers rave about, and it offers up way more performance than most drivers will ever need. I even had one passenger quip that full-throttle accelerations made their stomach drop a bit – not bad for a little family hatch, eh?

The Nissan Leaf SL Plus has an estimated range of around 350 km on a full charge. It will easily reach that target and could potentially even exceed it with a bit of hypermiling; steady acceleration and keeping the air-conditioning switched off certainly helps. I managed to cover just under 300 km before the battery dropped to about 10 per cent, and I was by no means driving slowly. (What can I say – that immediate torque is addicting!)

Mastering Nissan’s ePedal technology will also allow the user to get a bit more range. The feature enables one-pedal driving by using the electric motor’s regeneration function to slow the vehicle down. This saves brake pad wear, recharges the battery, and is ultimately a much smoother way to operate the vehicle. The regular brake pedal is heavy and has a stiff, numb feel to it at the top, so I preferred using the ePedal most of the time.

The Nissan Leaf SL Plus is extremely user-friendly. Big, chunky buttons for the HVAC system, large analog radio tuning and volume dials, an abundance of interior storage cubbies, and an easy-to-use infotainment screen make this little hatch one very convenient commuter. Don’t be fooled by the innovative powertrain: if you can operate a conventional car, the Leaf SL Plus will be just as straightforward, if not more so.

Also adding to the user-friendliness here are the dual charge ports. The Leaf SL Plus comes with both a regular Level 2 charge port and DC fast-charge port, ensuring it can plug in at virtually every public charge station one may come across. The only inconvenient part about charging is the abundance of apps you need to access different brands of charging stations – though that’s a problem best discussed separately.

The Nissan Leaf’s suspension is very softly sprung. It’s so soft that the car squats down quite dramatically when you accelerate quickly and lurches forward under hard braking. This isn’t ideal, but is a small trade-off for such a plush ride that swallows up bumps in the road with ease. Road noise is also minimal and, along with the silent electric powertrain, makes the Leaf a serene place to sit.

The interior ergonomics are also quite good. The seats are comfortable but still feature good side bolstering, and the flat-bottom steering wheel ensures taller folks have plenty of legroom when driving. The wheel also feels great in your palms and gives the interior a sportier appearance.

The Leaf Plus feels similar to other EVs, with the instantaneous torque delivering very impressive acceleration from a stop. As noted above, though, the suspension is soft and floaty, which can feel a bit weird when accelerating or braking hard. The electric steering rack is also heavily boosted and provides very little feel, but the lightness of the steering itself feels great around town and is very welcome when parking in a tight garage.

Also mentioned above is the odd brake pedal feel. I’ve sampled no shortage of new vehicles in recent years and this is perhaps the spongiest and least confidence-inspiring brake feel I’ve ever come across. It feels vague up top and then engages with a surprising amount of force, making it hard to brake in a linear fashion. If you are driving around town, I say turn the ePedal on and leave it that way.

Compare the Nissan Leaf SL Plus to a similarly equipped gas-powered hatchback and the value is undeniably terrible. With an eye-popping price tag of $55,148 after freight, the Leaf SL Plus is about $20,000 more than a well-equipped Golf GTI.

But this isn’t a regular hatchback – it’s a very well engineered electric vehicle that makes the idea of owning an EV easy and approachable. If you’re a believer in electric vehicle technology and want a emissions-free mode of transport, the Leaf Plus is decent value. I’d suggest going for a less content-rich model like the Leaf S Plus, which has all the bells and whistles anyone would need in a commuter car and starts at just under $49,000 with freight. Factor in available tax rebates for EVs – which vary based on which province you are in – and the Leaf Plus starts to seem like a much better proposition. The Canadian government estimates the cost of charging a Leaf Plus for a year will come in at just $520, as well, so there are some fuel savings to be factored in. Estimated fuel costs for a VW Golf GTI for one year are $1,775, as a quick point of reference.

The 2020 Nissan Leaf SL Plus is a well-engineered electric vehicle that really isn’t that much different than a comparable gasoline-powered compact hatchback. If one can charge it at home each night and doesn’t have to fiddle with the sometimes overpriced public chargers scattered about the country, there’s really no reason to not buy it over something like a VW Golf – except for the eye-popping price tag. If Nissan can begin to offer electric vehicles like this at a more reasonable price, we think they won’t be able to produce them fast enough or in large enough numbers. 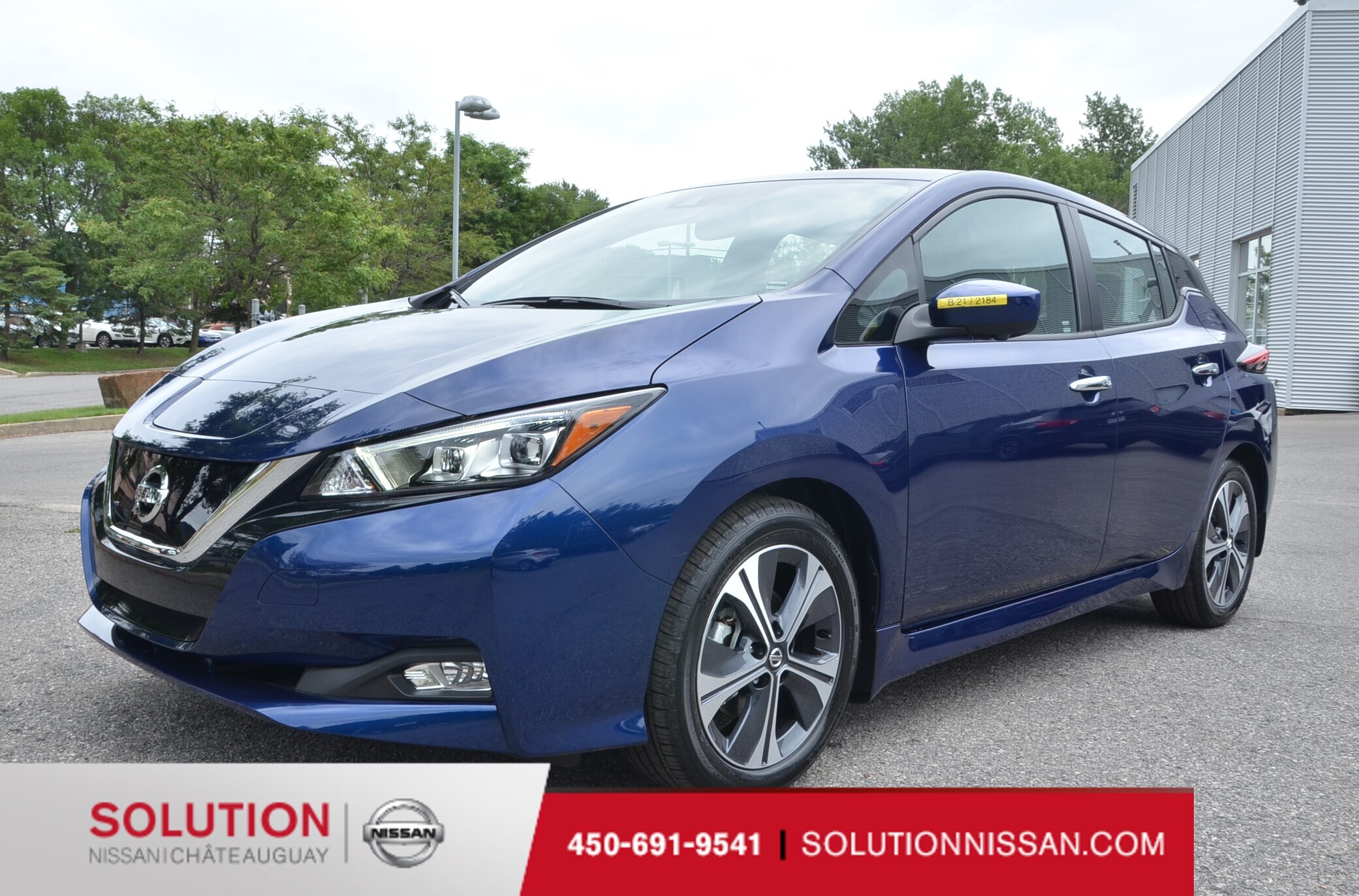