The success of Volkswagen’s three-row Atlas has inspired a variant that the automaker is hoping will capture even more new customers. The 2020 Volkswagen Atlas Cross Sport lacks the third row of its bigger sibling, but maintains much of the hardware and personality. In addition to being a five-seater that feels like a bigger crossover, the Atlas Cross Sport introduces a new design language, adding a bit of flair to the VW’s traditionally conservative look.

The Atlas Cross Sport is just one more entry in a growing segment that includes the Subaru Outback, Ford Edge Hyundai Santa Fe, Honda Passport, Nissan Murano, and Jeep Grand Cherokee. A few of these rivals prioritize off-road ruggedness, while others showcase modern, high-tech motoring. The Atlas Cross Sport skews towards the latter, although it’s offered with a pair of different engines, comes with standard all-wheel drive, and is loaded with technology and features. Let’s see how it stacks up.

Neither engine is exciting, though I preferred the four-cylinder with its flat torque curve, which is available much sooner in the rev range. It allowed for quick passes, though the motor doesn’t sound happy when pushed hard. The six-cylinder has more power that builds up naturally, but you feel like you’re waiting for a moment before the car is ready to accelerate. A few of the Atlas Cross Sport’s rivals only offer one engine, so it’s nice to have the choice. We had a few slightly unrefined gear changes when accelerating slowly from a stop, so further tuning may be coming to make it as smooth as possible.

If you’ve driven an Atlas, you’ll know exactly how the new Atlas Cross Sport feels like on the road. With light steering at low speeds that gets heavier at higher speeds, the five-seater gives off the suggestion of being smaller than it is when you’re driving around at parking lot speeds, but the truth is it is quite large and you may be pulling off three-point turns more often than you might have expected. The light steering can also provide an incredibly vague sense of handling.

Fortunately, it’s lightly sprung, and there are no complaints of it being stiff or uncomfortable on the ride. Sometimes, the suspension can feel a bit floaty, but it never feels truly unsettled or like it would lead to motion sickness for rear passengers. At its best, the Atlas Cross Sport will easily soak up highway miles, making it a solid road trip vehicle, but the large footprint (it has the same wheelbase as the large Atlas) makes it a bit uncomfortable in cityscapes.

Volkswagen has infused its usually conservative design language with more aggressive front and rear bumpers as well as an impressively raked rear pillar. It’s a softer look compared to the Atlas, which features a very upright and boxy style.

However, as different as the exterior is from the Atlas, the interior is almost identical. Fortunately, it’s easy to navigate and control. High-tech accommodations like the digital cockpit gauge cluster and the available 8-inch touchscreen infotainment system help to make the Atlas Cross Sport feel less like a mainstream family offering and a bit more premium. Otherwise, it’s a very familiar place and one that’s just about on par with the rest of the segment.

The infotainment system is easy to use and there are plenty of buttons and knobs that make it easy to familiarize yourself with the Atlas Cross Sport’s cabin. Android Auto and Apple CarPlay are also present, which is helpful to get your favourite apps on the infotainment display. The gauge cluster can be a bit more tedious to figure out, and there are almost too many buttons on the steering wheel, but you’ll get accustomed to it pretty easily. Despite the raked rear pillar, the Atlas Cross Sport doesn’t feature significantly worse visibility than the Atlas, and the various safety features are easy to enable and disable.

In addition to all-wheel drive, there are other solid standard features like heated seats, rain-sensing windshield wipers, auto-dimming mirrors, and heated side mirrors. The Atlas Cross Sport also comes standard with LED headlights and tail lights. The base infotainment system is a 6.5-inch screen, while the 8-inch one is found on higher trim levels. Other features found on higher trims of the Atlas Cross Sport include a power liftgate, remote start, a heated steering wheel, vented seats, dual-zone climate control, digital cockpit, and an upgraded Fender audio system. Top trim vehicles can also get an appearance package that includes 21-inch wheels. Fully loaded vehicles tick all the boxes, and even lower trim level models have enough features to keep buyers satisfied.

Safety features found on base models include forward-collision warning, blind-spot monitoring, and a rear cross-traffic alert system. Safety systems and driver’s aids such as adaptive cruise control, lane assist, light assist, park assist, traffic jam assist, and even a road sign detection system are all available. While the Volkswagen Atlas, which the Atlas Cross Sport is based on, has aced all of its crash tests, the Insurance Institute for Highway Safety took issue with the vehicle’s headlights, saying visibility was fair to inadequate depending on illuminating a straightaway or curve. Our experience in grey conditions in Vancouver and Whistler, BC, suggests that the lighting was fine, so perhaps VW has updated its lighting solutions for the Atlas Cross Sport and the upcoming Atlas facelift.

With a soft ride, there isn’t much to complain about in terms of the Atlas Cross Sport being uncomfortable on the road. Unfortunately, it’s not exactly a quiet ride when it comes to mitigating wind noise or engine buzz. There was some tire noise, but our model was wearing winter rubber. The seats are a bit flat and hard, which means they won’t be the most comfortable for everyone. Hard materials are found in a few corners of the vehicle, but they’re fairly well hidden.

Shorter in overall length and height compared to the Atlas, this five-seater Atlas Cross Sport has a bit less cargo space as well. There are 1,141 litres of storage behind the second row of seating, which is less than rivals like the Honda Passport, but more than the Subaru Outback and Ford Edge. Those rear seats fold down, offering about 2,204 litres of storage. This is just shy of the Honda Passport’s official figures, but the Atlas Cross Sport is also pretty capable, as V6 models can tow up to 5,000 lb.

The Atlas Cross Sport starts at $38,995 for the base Trendline model with the 2.0-litre turbocharged engine. From there, buyers can opt for a $45,195 Comfortline or bump up to the V6 powered Comfortline for $47,395. The top of the line Execline includes the V6 and will set you back $54,495, and buyers of that model can add an R-Line Appearance Package for $1,690. While the Atlas Cross Sport features a lower starting price than the Honda Passport, it is more expensive than the Outback and Edge, in both starting trims and fully loaded models. Even with all of its standard and extra features, it seems like a lot to pay for a smaller Atlas, which are currently a bit more affordable than the Cross Sport. Volkswagen says this will change later in the year, as the Atlas gets a facelift and revised packaging that includes standard all-wheel drive.

Some may dismiss it as an Atlas with one less row of seats, and that’s a fair observation; but the fact is the Cross Sport didn’t gain or lose anything in the process. It wears VW’s new design, is offered with a lot of features, and is plenty spacious for a five-seater. It’s important to note the somewhat steep price tag and the fact that it doesn’t drive any better or worse than the bigger Atlas. While it’s not as premium as the old Touareg, it certainly is more practical and affordable and that ticks most of the boxes for today’s crossover buyer. 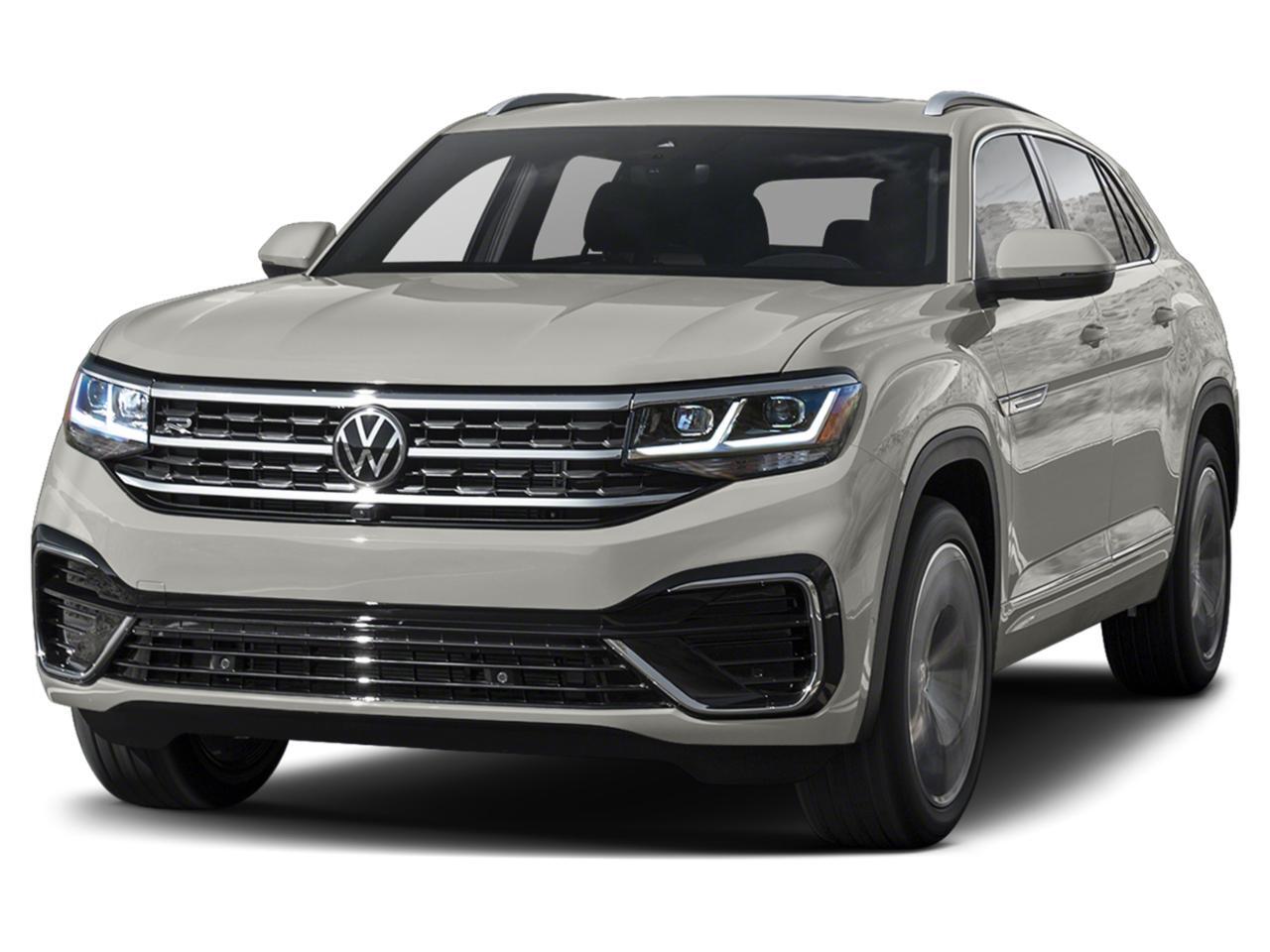