Toyota’s Corolla sedan has long been one of the most popular cars in Canada, competing head-to-head with the Honda Civic and Hyundai Elantra for top-seller status year after year. The company’s Prius hatchback, meanwhile, is one of the world’s first and best-selling hybrids. The all-new 2020 Toyota Corolla Hybrid marries the two models into an efficient and practical sedan that offers impressive value. It’s not an enthusiast’s driving machine and it doesn’t pretend to be, but it delivers good road manners and a quiet comfortable ride together with a different kind of driving excitement – the kind that comes from skipping yet another fuel stop.

The Corolla has never been a car styled to set the world on fire, although from certain angles the previous-generation sedan appeared styled to promote heartburn. The latest Corolla sedan tones down some of the previous generation’s stylistic excesses, so while the grille is still too big in my opinion, the overall look is crisp, clean, and modern. The Corolla Hybrid is virtually indistinguishable from the regular Corolla sedan, with blue-accented hybrid badging, unique 15-inch wheels fitted with low rolling-resistance tires, and active shutters hiding behind the grille. What really stands out about the Corolla Hybrid is that it doesn’t look anything like the self-consciously futuristic (read: “peculiar-looking”) Prius, although like the Prius, the Corolla Hybrid’s wheels are alloys fitted with plastic covers – a strange and somewhat redundant combo.

You can’t knock Toyota’s efforts when it comes to safety: Supplementing a full complement of basic mandated safety equipment, the Corolla Hybrid gets all of Toyota’s Star Safety and Safety Sense 2.0 gear. It adds up to an impressive array of equipment including auto high-beams, lane-departure alert and lane-keeping assist, pre-collision system with pedestrian and bicycle detection, stability control, brake assist and much more. The car’s basic structure is solid too, earning it a 2019 Top Safety Pick from the IIHS, with good crash ratings across the board. Only the LED headlights leave a little to be desired, with the IIHS giving poor marks for high-beam performance.

If practicality was measured purely on the basis of fuel-miserly commuting and errand-running, the Corolla Hybrid would score a solid 10. In terms of hauling stuff it does lose a little to its Prius hatchback cousin, but it doesn’t lose much. At 341 litres the trunk isn’t huge, but it’s easily big enough to fit a week’s worth of family groceries. I managed to fit a two-person inflatable kayak and a well-stuffed sailing bag in there, which I thought was pretty impressive. If you have larger items to transport, the rear seatbacks fold flat in a 60/40 split, although their cabin interior release latches mean you have to open the rear door to fold them, which also somewhat spoils the security advantage of having a sedan versus a hatchback (I prefer trunk-mounted release latches, which make the trunk itself into a bit of a strong-box).

There’s almost nothing about the Corolla Hybrid that’s strange, difficult, or quirky, making it very easy to live with on a day-to-day basis. The fact it’s a hybrid is well-hidden (the gearshift is perfectly normal, unlike the odd little magic wand in the Prius), so the driving experience is entirely familiar, and the keyless entry and push-button start are icing on the easy-to-use cake. The only thing holding the Corolla Hybrid back from full marks here are its lack of Android Auto compatibility and the fact that the hybrid drive’s creep mode can be a little abrupt when you release the brakes, making it difficult to be smooth while parallel parking in tight spots.

Overall, the Corolla Hybrid is a nice place to spend time. The free-standing infotainment display is sure to set a few folk’s stylistic sensibilities on edge, but from an ergonomic perspective it works well, and the rest of the interior style is simple and pleasing. Materials in my Premium Package tester were generally at or above par for the segment, and the Premium Package seats are nicely supportive, if a little sticky in the summer heat (I’d prefer real leather, but I guess if faux leather is good enough for BMW and Mercedes …).

I did feel that the front seat squabs could be a little longer (I have fairly long legs), while in the back headroom is at a premium (at 5'11" my hair was just brushing the roof). The heated rear seats are a nice touch, and the armrest has cupholders in it, but there’s no power outlet or fresh air vents back there.

The Corolla Hybrid may be an all-new model but its powertrain is well proven, having been lifted directly from the Prius. So you get the same 1.8-litre Atkinson cycle gas engine and 53 kW main electric drive motor, working with the same CVT transmission to produce 121 net horsepower. Off the line and around town, the electric motor’s instant torque makes the Corolla Hybrid feel reasonably sprightly (especially if you select the Sport mode, which sharpens up initial throttle response). This means that keeping up with the flow of city traffic is a cinch. When accelerating hard at higher speeds, however (such as when passing on the highway or climbing steep hills), the limitations of the Corolla Hybrid’s 121 horses become evident. The gas engine drones away mightily, but speed is slow to build past about 50 km/h (the sprint from 0–50 km/h is dispatched in about four seconds flat, but the run to 100 km/h takes 11 seconds).

When driven with a bit of restraint, the powertrain gets high points for smoothness and quietness – the switch between electric-only and hybrid gas–electric operation is barely perceptible, and when not accelerating hard the gas engine is extremely well muffled. Certainly in terms of meeting its fuel-efficiency mission there’s little to fault with the powertrain.

The 2020 Corolla Hybrid is based on Toyota’s recently developed Toyota New Global Architecture, which features a multi-link rear suspension (replacing the previous torsion bar suspension) and a stiffer structure than the previous-generation car. On the road I found the Corolla Hybrid’s ride to be firm and well-controlled, yet nicely compliant. Steering feel through the electric steering isn’t especially good, but the car handles with confident composure and tracks easily on the highway.

My test car was showing a long-term average of exactly 4.4 L/100 km when I picked it up, and I easily matched that rating myself while driving in my normal (which means mildly aggressive) fashion. During two of my days with the car I paid just a little extra attention to my acceleration and braking and had no problem achieving 3.8 L/100 km in mixed city/suburban driving. Short of going full electric or buying a small motorcycle, it’s the kind of efficiency that just can’t be beat.

Priced at $24,790 for the base model, and $26,790 for my Premium Package tester, the Toyota Corolla Hybrid represents excellent value. A base Prius runs $27,990, with the Prius Technology (which features similar equipment upgrades to the Corolla Premium Package) checking in at $32,490. Honda’s Insight starts at $28,090, or $31,990 in Touring trim. Only the Hyundai Ioniq comes close to matching the Corolla Hybrid’s value, at $24,399 for the base model or $29,849 when similarly equipped to the Corolla Hybrid Premium Package (you get real leather with the Hyundai, mind you, although the Ioniq Hybrid Luxury model loses some fuel efficiency, coming in at 4.3/4.4 L/100 km city/highway).

For shoppers looking for the ultimate in a frugal and easy-to-live-with new car, the 2020 Toyota Corolla Hybrid is a must-see contender. There are cheaper cars out there, and there are more efficient all-electric options like the $42,298 Nissan Leaf. But with the exception of the Hyundai Ioniq Hybrid, there’s really nothing as efficient or user-friendly for the price as the Toyota Corolla Hybrid. 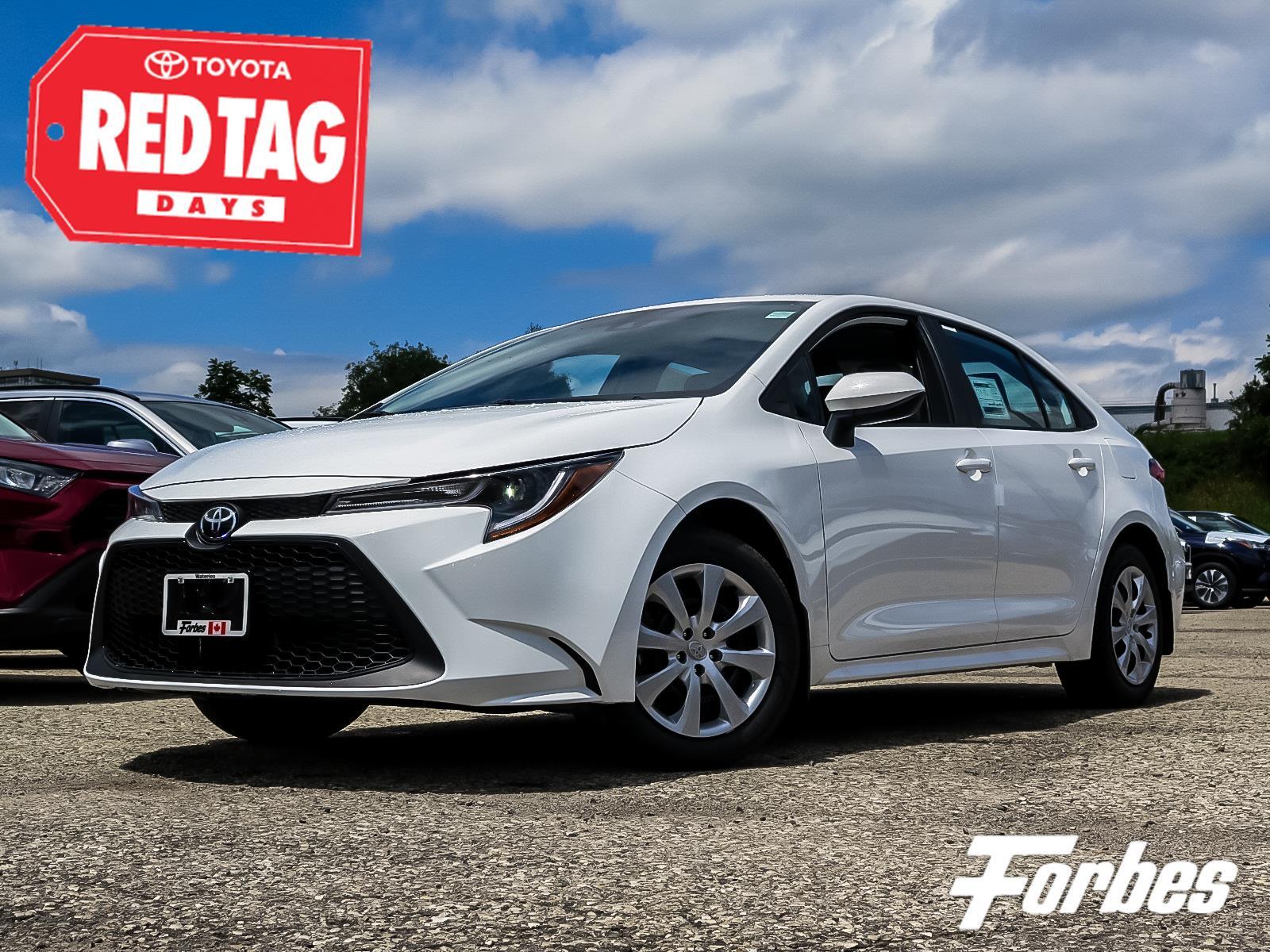 About Simon Hill
Simon Hill rebuilt his first engine, an air-cooled Volkswagen, at 14. He started writing professionally about cars in 2009 and was also the editor of Boat Journal magazine. He lives in Vancouver, BC.
You may also like
Latest Articles
﻿