Throughout the automotive universe, there is possibly no other vehicle that appeals to as broad a group of people as Jeep’s Grand Cherokee. From the value-leading Laredo starting at around $45,000, to the obscene 707-horsepower Trackhawk for more than $100,000, it seems Jeep’s large SUV can be all things to all people. In the middle of the lineup is the most off-road-ready Grand Cherokee, the Trailhawk, that goes from rock-climbing to the valet station better than anything this side of a Range Rover.

This fourth-generation Grand Cherokee has been around for nearly a decade, with only periodic updates to its styling. Despite its age, the Jeep’s appearance remains an asset, and while this Trailhawk edition gives up the fashion of the 20-inch wheels found on other trims, its 18-inchers are wrapped in rugged-looking rubber that suits the rig’s station in life. The Grand Cherokee is broad-shouldered and squared-off for function, and its trademark seven-bar grille makes it instantly recognizable as a Jeep.

Inside, the black Nappa leather seats are accented with red stitching, and look sufficiently decadent. However, many of the trim pieces, do not, with considerable amount of real estate being given to chintzy plastic pieces finished to look like chrome, aluminum, or wood.

As Jeep’s most capacious SUV, the Grand Cherokee can swallow nearly 2,000 L worth of cargo with the backseat folded (1,028 L with the backseat up). Passengers in the front or rear enjoy decent leg- and headroom, making it comfortable for getaway adventures. That said, unlike several of the Grand Cherokee’s competitors, Jeep does not offer a third-row seat, limiting its practicality somewhat.

The Trailhawk’s off-road prowess is matched only by the Toyota 4Runner TRD Pro and Jeep’s own Wrangler within its price range, and at the high end, by the likes of a Range Rover Sport or Mercedes G-Class. Thus, buyers needing the functionality of a truly off-road-capable SUV should consider the Grand Cherokee Trailhawk.

Adding to its functionality is the Grand Cherokee’s tow rating of more than 3,200 kg – a figure that surpasses its immediate competition.

Unique in this class, the sizable V8 gives the Grand Cherokee considerably more personality in addition to more power, especially when the Sport drive mode is selected, when throttle response sharpens and the eight-speed transmission more willing to kick down to lower gears for swift acceleration.

Our Trailhawk test vehicle was loaded up with enough options that after the destination charge was added in, it stickered at over $71,000. That’s a considerable amount for a non-premium brand; however, aside from some of those cheap trim bits, this particular rig offered enough amenities to make it competitive with true luxury products.

Beyond the heated and cooled, Nappa leather seats – which provide decent comfort and support, even for long days on (or off) the road – there were other niceties like the dual-screen, rear entertainment system featuring a pair of seat-mounted screens, as well as a large, dual-pane sunroof, and a powerful nine-speaker audio system. The Active Safety Group option package includes a Parallel/Perpendicular Park Assist system, while the Trailhawk-specific Quadra-Lift air suspension not only enables superior ground clearance when needed, but a suitably luxurious ride, too.

There is plenty here to help justify the steep asking price, though we’d forego most of it in the interest of having a simpler machine that gives up nothing in terms of off-road capability, and very little by way of essentials for passenger comfort or safety.

Jeep’s 8.4-inch Uconnect infotainment system is among the best in the business for simplicity and ease of use. What’s more, it offers satellite radio (with a full-year free subscription), Apple CarPlay and Android Auto, as well as a host of cool off-road display pages.

Controls are also sensibly laid out with a pair of large, round gauges flanking an additional digital display. Plus, primary audio and climate controls are managed through large, rotary knobs, making for easy-use, even without having to take eyes off the road or trail. Various terrain modes are also accessed via a rotary knob (as well as selectors for 4WD Low and crawl control), making off-road driving much simpler now than in the olden days when getting out and manually locking hubs was the norm.

Passengers are also provided a wealth of plug-in ports for devices, including a 115-volt AC plug outlet. 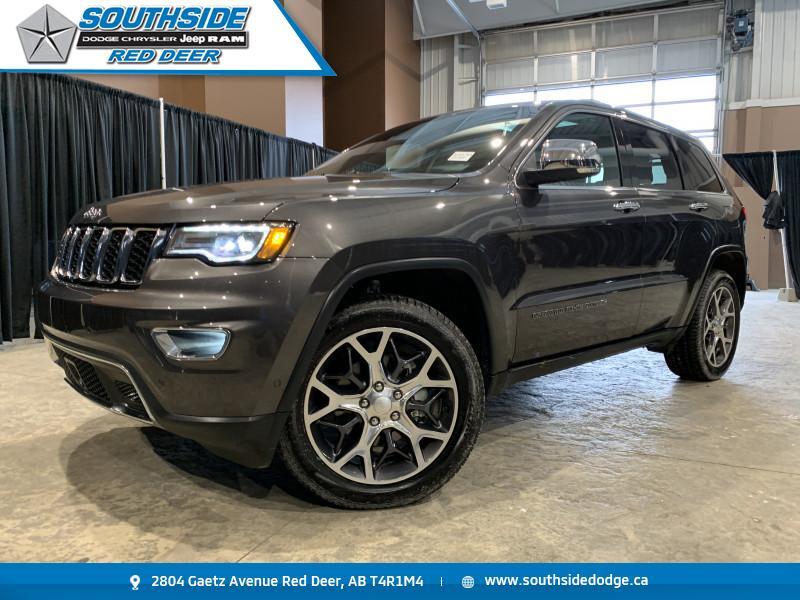 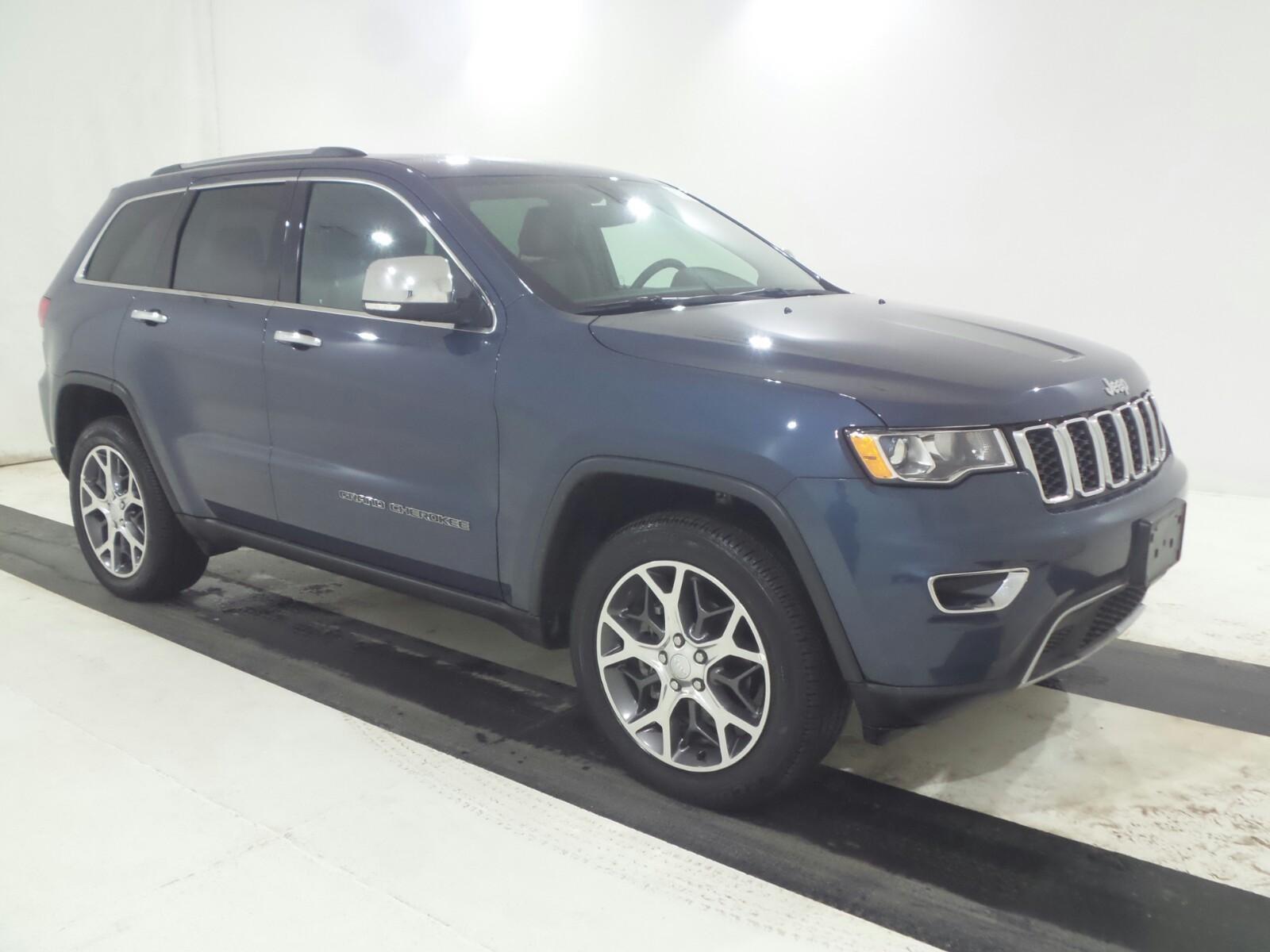 After driving the Grand Cherokee Trailhawk last autumn in Moab – this very unit, in fact – its off-road prowess was no longer in question. The four-wheel drive system (and Goodyear Wrangler all-terrain tires) managed grip on the rocky surfaces very well, and the air suspension enabled tippy-toe ground clearance. It still pales in comparison to Jeep’s Wrangler Rubicon, so hardcore off-roaders will still want to go that route, but the Grand Cherokee, by most SUV standards, is certainly no slouch.

We had very little on-road time with the Trailhawk last autumn, so given the chance to live with the Jeep again for a week at home seemed like a good idea to see how well it holds up in daily-routine living.

As it happens, the big Jeep suits suburban life (which is where most will spend the majority of their days) just as well as its time in Moab. On the highway, the Trailhawk hunkers down on its air suspension in Aero mode, and cruises along smoothly and quietly.

Around town, its V8 gives plenty of grunt to pull away from stoplights swiftly, and its tall stance and ample greenhouse give a good view around, making parking easy, even if one doesn’t cheat and use the computerized parking assist functions.

Being the most off-road-capable of the extensive Grand Cherokee lineup, the Trailhawk trim is an obvious starting point. We’d skip all the fancy stuff from our test vehicle and add only the 5.7L V8 to the option sheet. Then we’d look to the Mopar Accessories catalogue to find some cool roof racks to help us get our toys to far-off adventures.

But even a standard-equipment Trailhawk has all the off-road goodies, plus the essentials for most folks’ needs (infotainment system with navigation, heated seats all around, remote starter, and even the Class IV hitch) and starts at $58,695.

Better still, at the time of writing, Jeep has a 15 percent discount offered for all 2019 Grand Cherokees, meaning the one we’d have, with no options besides the Hemi, would tally up to only $52,369, which comparatively speaking, offers significant value.

While it’s commendable that Jeep offers all that safety technology, a buyer must still spend thousands of dollars extra to get it, while competitors like Toyota and Honda have made a commitment to offer much of that functionality – even on very affordable cars – with the cost baked-in to the standard price.

The 5.7L V8 offers a fuel-saving cylinder-deactivation function during highway cruising when much of the engine’s power isn’t needed. This certainly helps, but let’s face it, to enjoy the power and torque of that V8, it requires some go-juice, and the average consumption rates equate to 16.7 L/100 km city, 10.9 highway, and a 14.1 L/100km combined rate.

Yes. The Grand Cherokee in Trailhawk trim, especially with the V8 is a compelling and fun-to-drive choice in the mid-size-to-large SUV segment. It’s significantly more capable than other crossover SUVs, yet far more posh and comfortable than other rugged off-roaders like the 4Runner TRD Pro or Wrangler Unlimited.

About Jeff Wilson
Jeff has been an automotive and motorcycle journalist for nearly a decade, but his passion for cars and bikes stretches back to his childhood. A member of AJAC, Jeff has also served on its board of directors, and has won multiple awards for both his writing and photography. When chasing his automotive dreams, Jeff also divides his time between being a father and a television producer with an internationally acclaimed, Emmy-nominated production team.
Follow me
You may also like
7.2