Here are some reasons that you might want to go test drive the new 2019 Subaru Impreza:

Presently (but not for long), Impreza is Canada’s only mainstream AWD compact, Canada’s cheapest AWD vehicle, and a machine bound to connect readily with a shopper who wants to kick winter’s butt, but affordably, and in a properly sporty-feeling package.

Until the new AWD-equipped Mazda3 arrives to give the Impreza some company (others will likely follow, Jetta first if I had to bet money on it), those after an AWD-equipped small car for not that much money have just one option – and this is it.

Do you like having lots of choices? Subaru thinks so. That’s why Impreza is offered in both sedan and hatchback, with manual or automatic (CVT) transmissions, and with a laundry list of trim grades to suit any need.

My tester? The top-dog Sport-tech sedan, with EyeSight safety technology, priced around $30,000 with all the toys. Pricing starts at $20,000, if you’re after something a little more modest. All models get the same engine, and AWD is, of course, standard across the board.

From your perch, a deeply sculpted and modern interior is presented, and some up-level touches and plenty of attention to detail help dial up the flair. There’s plenty of contrast and colour and texture to go around, and a touch of extra chunkiness to some of the edges and controls adds further uniqueness.

The red instruments and metal sports pedals are old-school cool, and the piping-hot heated leather steering wheel feature grippy thumb detents and a set of paddle shifters. At the tips of your fingers and toes, and before you even fire it up, Impreza tells you it’s ready to drive.

Elsewhere, the central command touchscreen is easy to use after a little practice, but tech-savvy users will be disappointed with the graphics, which call a shopping-mall ATM to mind. The screen is bright and clear, and most menu structuring is logical and easily sorted.

There’s room to spare for all of those smaller items you tend to bring along for the drive – proper cupholders accept even the girthiest of beverage containers, the covered centre console bin had room to spare for my camera with attached lens, and deep door pockets can swallow multiple sets of winter gloves when needed.

Leave those on, and you can still manipulate the climate control and most steering-wheel-mounted functions with ease, thanks to relatively chunky and well-separated controls.

The driving position is 107 percent car-like: you sit down low, your bum is close to the road, and you feel like you’re in the centre of the action. If you’ve been driving a larger, taller vehicle for years, you’ll probably find this to feel refreshing. Drivers sit upright within the cabin, and are encircled by plenty of tall glass for a decent view out, too. In back, there’s room enough for two average-size adults, but little more. If anyone in your life is a human taco-disposal unit, they’ll probably be best in the front.

Rear seatbacks flip and fold when more cargo space is required, because of course they do. The trunk opening is short, but very wide and generously sized overall. Expect no issues tackling a $300 Costco run, or four people’s worth of luggage. Thing is, someone forgot to design in a trunk closer handle – meaning that in winter, you’ll be touching cold, salty, filthy sheet metal every time you close it up.

But seriously, the way Impreza drives is the best thing about it.

The feel, combined with the low-ish driving position, combined with a lovely and stable lightness carefully dialled into the whole thing, make it feel like a zippy, eager, and feisty thing. There’s this energy to the way the Impreza responds to your commands that’s becoming rarer and rarer as small cars get bigger.

Test drive most other small sedans, or virtually any crossover in the same pricing universe, and you’ll likely find the Impreza simply feels like a smaller and lighter machine. And given that Impreza isn’t actually that small, this is all because someone spent time fine-tuning what the driver experiences. 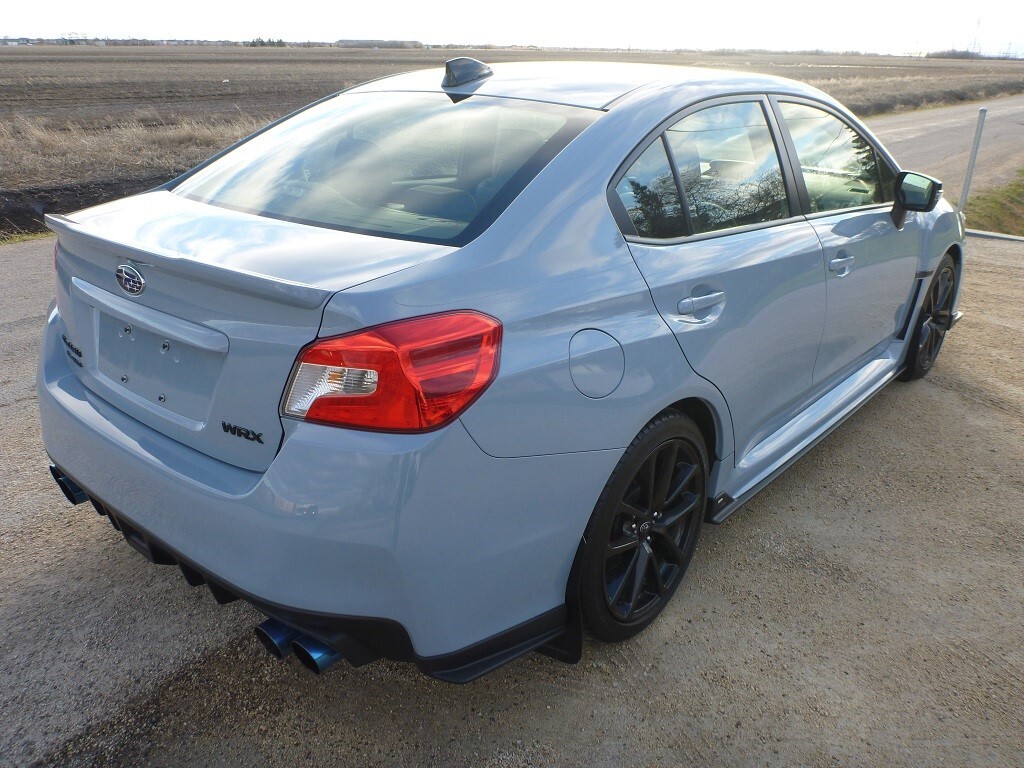 Specifically? It’s direct, light, flat, tidy, and responds right now. The steering is just a touch quicker than it needs to be. The brakes feel a little more precise than the norm. This all helps more easily satisfy the brain of the enthusiast driver. You take this all in while sitting closer to the road, the chassis, and the centre of gravity – not above it. It’s all a playful nudge that suggests you enjoy yourself when the road gets to some twisting and turning.

This, I figure, is one of Impreza’s core strengths.

Another? The feeling of durability – and that’s even on the roads of Sudbury, Ontario.

You’ll find the odd square metre of undamaged pavement here and there around town. Just kidding – our roads are made of half-assed asphalt patching, wet gravel, and have the durability of boiled kale-slaw. The other day, I even saw a pothole that had a pothole inside of it – really.

Anything less than a Jeep Wrangler or full-sized pickup is in for a bad time here, but Impreza imparts a higher-than-average sense of toughness, and a lower-than-expected sensation that you’ll need to call the dealer for new suspension, even on the sort of surfaces that make you apologizes out loud to your car.

Sure, you need to avoid the potholes and as a sporty sort of thing, Impreza still lets you know, in no uncertain terms, that you’re covering rough ground. But, and as I’ve noted on numerous past test drives, the suspension can take a serious level of abuse without feeling like it’s disintegrating.

As a sports car fan, I found Impreza’s ride to be firm enough to get the point across, but finished with a strategic layer of softness in the suspension travel that kept it from ever becoming too harsh. Its comfy-sporty.

This will leave some wishing for more power from the sole available engine: a 2.0-litre flat-four with 152 horsepower. On one hand, this is one of those engines that stirs smiles for numerous reasons that have little to do with the power output: it likes to rev, doesn’t mind being worked hard, and sounds sweet and mellow and polished, from idle to redline.

On the other hand, it’s nowhere near the fastest-accelerating compact on the road (unless it’s snowing). Overall performance is adequate, though driving enthusiasts will wish for more power, and especially, more low-end torque.

Speaking of traction, Impreza’s AWD system requires nothing of you. No decision-making. No levers. No buttons. It just works invisibly in the background, and you’ll likely forget its even there until you pull gracefully away from a green light in six inches of fresh powder while the front-drive cars all slip and spin like peasants. (This never gets old.)

Even when you’re sure you’re stuck, just keeping your boot about halfway into the throttle for a moment is typically sufficient to see the Impreza dig itself out. The AWD system never feels confused, never makes you wonder what the heck it’s doing, and almost never takes more than a few rotations of a slipping wheel to get things moving again.

Further confidence comes from good headlights, communicative braking feel with drama-free stops, and the EyeSight safety system – which uses cameras to warn you of potential hazards up the road and can even automatically prevent certain types of accidents. The EyeSight system also powers the adaptive cruise control system, which works smoothly and predictably – and this makes it easier to trust, and use more often. If you’re doing your online banking in the drive-thru, it can even tell you when the car ahead has moved out of your way. It’s a crazy world we live in.

My tester got Subaru’s continuously variable transmission (CVT). If the Impreza might be your first CVT-equipped vehicle, the important thing to know is that it’s just an automatic transmission – but smoother, and easier on fuel, and quicker. Mostly, it’s a smooth surge of power, uninterrupted by gear shifting. Press harder on the throttle, and some fake gearshifts are carried out, to make it feel more conventional. The gist? The average driver will rarely detect the transmission’s existence at all.

Paddle shifters add further excitement and respond quickly – though there’s little point to using them. You’ll probably try them once, maybe twice. Bellyaching enthusiasts don’t like this type of transmission for various reasons – but they’ll opt for the manual five-speed gearbox anyhow.

Complaints include a few larger-than-expected interior panel gaps, some interior plastics that seem too easily scuffed by passing winter boots, and the aforementioned infotainment system graphics, lack of a trunk-closer handle, and fairly modest acceleration capability.

Ringing up at a tad over $30,000 with a sunroof, heated leather, EyeSight safety, push-button start, and more, the 2019 Subaru Impreza Sport-tech is among the best compacts on the scene today – and an excellent test drive exercise for the shopper after an athletic-feeling little sport sedan that’s an absolute champ in the snow.