Let’s take a moment here to appreciate what Toyota has done with the Corolla over the decades and generations. By keeping it simple in design and ensuring stringent quality at its assembly facilities and supply chain throughout its lifespan, they have delivered a vehicle that is reliable generation after generation, and not only cheap to buy, but also cheap to maintain and run.

Just what you’d expect from the familiar nameplate.

As much as I might want a car with acceleration that will tear my eyelids off and handling that will rearrange my internal organs, many people just want a car to get them from place to place, into work in the mornings, grocery runs on the weekend, and maybe an occasional trip out of town. Having a car that requires the least amount of attention, money, and effort is an absolutely reasonable requirement if you want to spend your energy and time on other things that make you happy, be it a hobby, socializing, or work.

You have probably heard of the Toyota Corolla, and yup, you can still go ahead and get another one to replace the one you have if it’s starting to cost too much in repairs. It’s never a bad choice if all you’re looking for is reliable transportation.

Now, it has also become more than that, trying to offer more with every generation and update, but on the flip side, there are other options that may be equal or better in some areas, and that’s what we’re here to dive into.

Let’s start with the big stuff, the engine and transmission. Part of the reason the Corolla has gained such an excellent reliability record is sticking with proven powertrain technologies, so the engine is a simple 1.8L inline-four, and while it features dual variable valve timing, you won’t find direct injection or turbos here. However, when it comes to the transmission, Toyota hasn’t taken long to adopt the benefit of a continuously variable transmission, which is smaller, lighter, less complex, and can deliver greater efficiency than traditional automatics. The 2019 Toyota Corolla with CVT is rated at 8.3 L/100 km in city driving, 6.5 on the highway, and 7.5 combined by Transport Canada, and they estimate you’ll spend in the ballpark of $1,500 per year on gas for an average mix of driving.

Together, the engine and transmission do their job as expected, with good initial throttle response so it feels quick when you first get going, then easing up to speed without any lurching or delays. It’s not fast by any stretch of the imagination, but it’s fine in everyday driving, though it gets noisy if you drive with a heavy foot and try to keep up with faster traffic, and isn’t the quietest cabin when just cruising along at highway speeds. If you commute during rush hour, you’ll be happy to have adaptive cruise taking over acceleration and braking for you, no matter what trim you buy.

When it comes to the ride, it’s not quite as smooth as the power delivery. Although it’s nice that it feels a bit more sporty, with quick, light steering that makes it easy to manoeuvre and park, it’s a bumpy ride on any of the poorly paved roads around the city, and on the highway it jitters over expansion joints and uneven pavement. The Corolla’s arch-rival Honda Civic feels much more comfortable without being any less fun to drive.

The Corolla started out as a tiny little compact that was smaller than the current Yaris, but it has grown to more than 4.6 metres long with a 2.7 m wheelbase, allowing acres of interior space. Headroom in front and back is on par with other large-ish compacts like the Civic and Volkswagen Jetta, and front legroom is also similar, but the Corolla packs in 10 centimetres more rear legroom than those two, so it’s great for carpool duties with other adults in the back. However, maybe limit rear passengers to two, since the Corolla is narrower than the Civic and Hyundai Elantra, both of which have more shoulder and hip room. The legroom had to come from somewhere, and that would be trunk space, which is fine at 368 litres, but that is less than any of Civic, Jetta, or Elantra.

The rear seats are typical for the class, fairly flat and not particularly comfortable, but livable. The front seats, however, have come a long way, and while everyone is shaped differently, I found the front seats excellent, and many of my colleagues have found them equally pleasing, so they should be comfortable for a wide range of body types.

From the driver’s seat, the Corolla is a mixed bag. It’s mostly grey and black, so it’s a bit dreary, although the colourful backlighting of controls makes it much more interesting at night. Look closely, and you’ll see some interesting shapes and touches that show Toyota designers are trying to liven things up, but nothing too wild that will make the controls difficult or freak out those that just want simple, easy to use controls. The steering wheel is wrapped in decent leather and heated in the LE trim and above, with controls for audio, phone, and trip computer and more. However, the rest of the cabin is fairly-mediocre-quality plastics and the leather seating is synthetic and a bit rubbery, but nicely trimmed in contrasting stitching and piping. 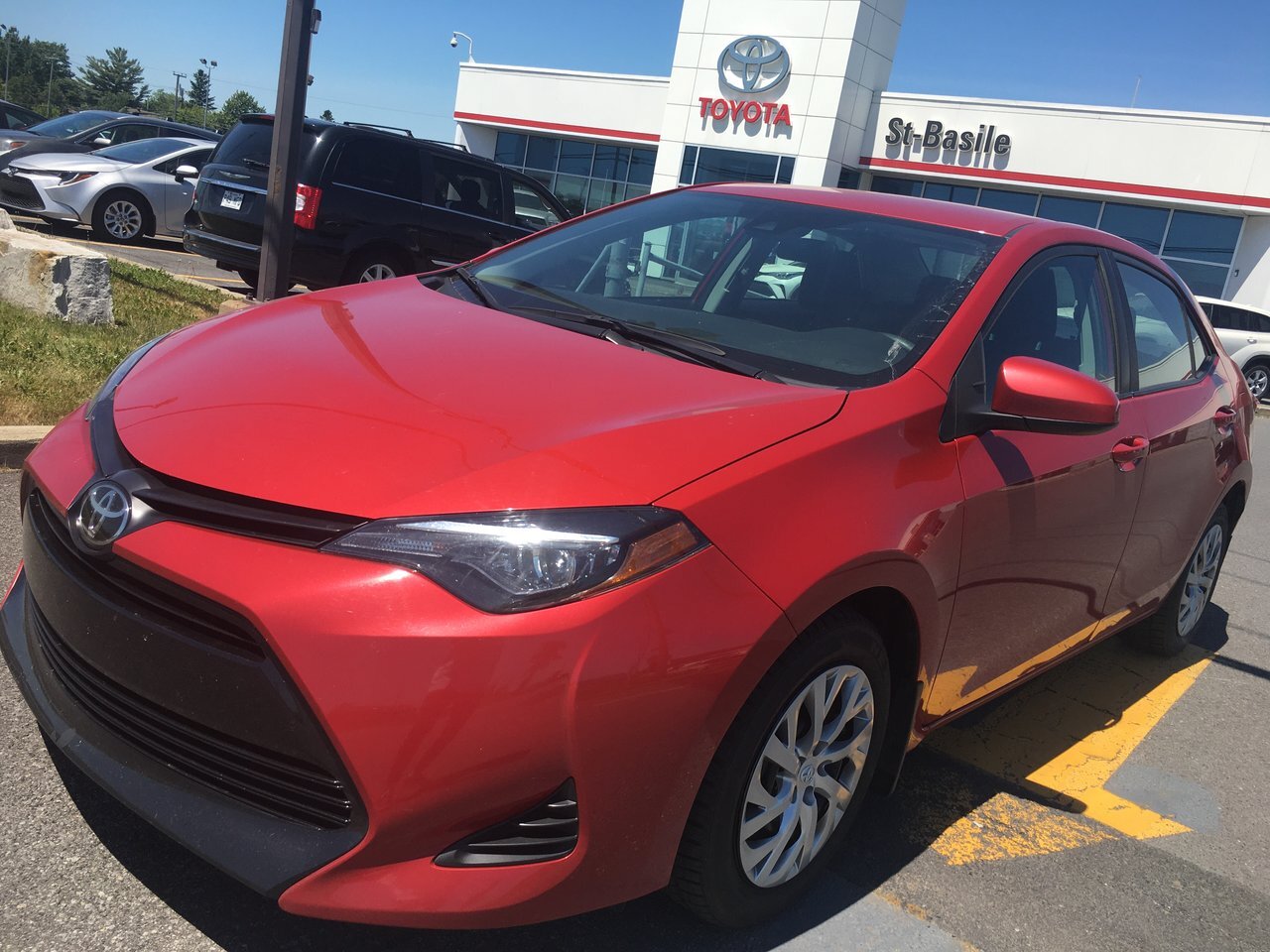 The central display for audio, phone and navigation also follows the theme of basic design, but well executed. The touchscreen doesn’t overwhelm with snazzy graphics, but the home screen icons are large and clear, with haptic “buttons” to the side for some shortcuts to phone and audio. One thing I find incredibly pleasing is that the audio shortcuts can be a mix of AM, FM, and satellite radio stations, so you don’t have to switch modes to see all your favourites from different sources. Toyota does not offer Apple CarPlay or Android Auto, but using Bluetooth, you can still make calls or listen to your music through the car’s system, even using Siri to control your phone.

Toyota is smart about its packaging and doesn’t overwhelm shoppers with hundreds of possible combinations, instead breaking it down into three major trims, the basic CE, upgraded LE, and sporty SE, with just a few options for each level.

The 2019 Corolla CE is priced at $16,790 with a manual transmission or $20,375 with the CVT automatic, plus all models have a $1,645 Freight & PDI fee. The CE features a 6.1-inch touchscreen for audio and phone, Bluetooth, information display in the gauge cluster, fabric seats, 15-inch steel wheels, back-up camera, auto LED headlights, and the Toyota Safety Sense suite, with adaptive cruise, forward collision alert, and lane-departure alert. Pony up for the CVT and you get air conditioning thrown in as well.

The next step in the Toyota Corolla hierarchy is the LE starting at $21,210 with the CVT standard on this trim. The LE adds heated front seats, premium fabric seats, auto climate controls with air conditioning, 16-inch steel wheels, and nicer interior materials. If efficiency is your biggest priority, the LE has an ECO version for $500 more and a unique version of the 1.8L engine that bumps horsepower up 140 yet delivers even better efficiency (7.8/5.9/6.9 L/100 km city/hwy/comb), but the wheels are downsized to 15 inches with low-rolling resistance tires to help it achieve that added thriftiness.

That’s still a modest price, but the LE is where you can also get into a long list of options with the Upgrade package or XLE package. The Upgrade package is a modest one, adding a heated, leather-wrapped steering wheel, 16-inch alloys, and a power sunroof for $1,500 over the LE ($22,710). The XLE is not a cheap package, taking the Corolla up to $25,900, but it piles on features like satellite radio, navigation, eight-way power adjustable driver’s seat, Softex Leather seats, proximity keyless entry with push-button start, auto-dimming rear view mirror with garage door opener, and a tire pressure monitoring system.

The SE trim parallels the LE, starting at $21,025 with a manual transmission or $22,010 for the CVT with a sport mode and paddle shifters. The SE features pretty much all the same gear as the LE with air, 16-inch steel wheels and nicer interior materials, but the heated “sport seats” are covered in “sport fabric”, and you get a “sport speedometer”. The Upgrade package is also the same $1,500 as on the LE, but you can still get it with the manual transmission or CVT, and the alloy wheels are 17 inches, plus they swap out the rear drum brakes for disc brakes to go along with the standard front ventilated disc brakes. The most expensive Corolla you can buy is the XSE, which lists at $26,090, which can only be had with the CVT and has all the same tech and perks as the XLE listed above.

The Corolla doesn’t lavish on the features, coming up short compared to competitors that offer traffic integration on navigation, wireless charging, real leather seating surfaces, heated rear seats, premium audio systems, more advanced driver aids, engine upgrades and sporty versions with all the same practicality. This generation of Corolla is content to stick to its basic transportation mission with a few perks, but nothing that will push its pricing past 30 thousand. However, if you want the latest and greatest Toyota has to offer, the 2019 Corolla Hatchback is a newer-generation platform, has a more powerful yet efficient engine, and does add more competitive features, yet still tops out under $30,000. However, with a new engine and transmission, it might pose a greater risk in terms of reliability, so cautious types are duly warned.

The 2019 Toyota Corolla is just what you’d expect from the familiar nameplate. A simple car that will get you where you need to go without spending too much money at purchase or during the many ownership years. It should deliver exceptional reliability and good resale value when it’s time to trade in again. While Toyota has definitely jazzed up the styling, it’s not overly aggressive (in my opinion), and its interior flourishes don’t take away from the superb functionality. My only significant complaint is a ride that is too hard for a car that should be pleasant and relaxed all the way to go along with its modest power. It’s not the latest “in” thing, a must-have fashion accessory, or sporting the latest futuristic tech, but the Corolla is a good car and a good buy, so be confident you’re making a sound choice if you opt for the simplicity of the dependable Corolla.

About Jonathan Yarkony
Jonathan Yarkony is the former Senior Editor for Autos.ca and autoTRADER.ca, AJAC member, a Brampton-based automotive writer with years of experience evaluating cars and installing child car seats.
Follow me
You may also like
7.4