The new GLE Coupe puts yet another Mercedes utility vehicle on the table for crossover shoppers, as a unique body style alternative to the standard GLE, which recently replaced the ML as a good old-fashioned family crossover. Go for the GLE Coupe, and you get a swoopy roofline and more elegant, curvaceous sculpting, all geared to appeal to shoppers that want uniqueness and selection.

And though the GLE Coupe is a styling statement, and one with the standard list of ute-coupe compromises in play, Benz’s new X6-fighter works impressively well as a sports utility vehicle in two areas of importance: utility and capability.

But first, the compromises.

Largely thanks to the GLE Coupe’s intention of being both fit and capable, drivers access their sporty seat with a hop up on board, after clearing a fairly aggressive seat bolster with their thigh, which can be a little awkward. Ditto the driving and seating position, which sees occupants perched high and towering above the road, though simultaneously deep within the cabin and up close to its roof. Headroom diminishes quickly for those north of about 5”10, and outward sightlines, thanks to the thin windows all around, are limited. Mercedes seems to have embraced this, with a relatively tiny rearview mirror. A full array of cameras and beepers do a better job of monitoring surroundings than most human drivers, anyways.

Get past the compromised visibility, entry and exit and driving position, and the utility and capability impress.

First, the utility. The powered tailgate opens high, revealing a deep, wide, and flat rear cargo floor, complete with handy bins at either rear corner, a power outlet for your camping cooler or beach-toy inflator, and minimally-invasive wheel wells. It’s all usable space, free of awkward bumps and bulges. Taller items need to be pushed forward thanks to the aggressive downward slope of the greenhouse towards the rear, but the rear seat bottoms tip ahead, allowing the seatback to fold fully flat, maximizing cargo length and flatness. With a rear seat or two folded, there’s even room for longer items, like a weekends worth of skiing or snowboard gear.

Though the GLE is a great hulking beast of a thing, you’ll still be surprised at the space available. Only drawback? There’s a lip at the edge of the cargo hold, which increases load-in height and likely means the family pooch won’t be jumping in and out. Rear seating space is generous, and headroom is surprisingly good, as the roof doesn’t begin its descent until just behind where occupant heads are positioned. There’s no issue fitting four or even five full-grown adults on board.

Capability in an off-road setting impresses, too, as does a list of features and touches that help the GLE handle more demanding driving conditions with less stress. Tap a button, and the air suspension inflates, lifting the body high above its wheels for heaps of ground clearance over moguls, ruts and whumps. The low-end torque of the diesel engine sets the GLE Coupe crawling up and over virtually anything with just a glance at the throttle, and the downhill assist system engages at the first sign of a downward slope, meticulously inching the massive machine down even slippery grades.

Steering is one-finger light at low speed, for easy maneuvering and placement of the GLE where it’s needed. This is a stark contrast to the BMW X6, which maintains its sporty, heavy steering feel at all times, adding effort to low-speed maneuverability that you’ll notice quickly. Best of all, the 360-degree camera system is the best in the business, with a seamless, high-resolution image that lets drivers park with absolute ease, and also keep an eye on off-road obstacles they’d rather not run over, without having to lean out a window.

Finally, the 4MATIC AWD system feels truly intuitive in slippery, off-road settings, never wastefully spinning a wheel more than a half turn or so. Impressively, with the vehicle pitched in three-wheel mode, you almost never feel the airborne wheel receiving power. It’s as if the AWD and suspension systems are in cahoots. I never once felt the tester struggle, even slightly, to find traction. This AWD system knows what’s up.

In all, though you won’t likely do any off-roading with your GLE Coupe, it’s nice to know you’re covered for an easygoing and relaxed experience if you do. 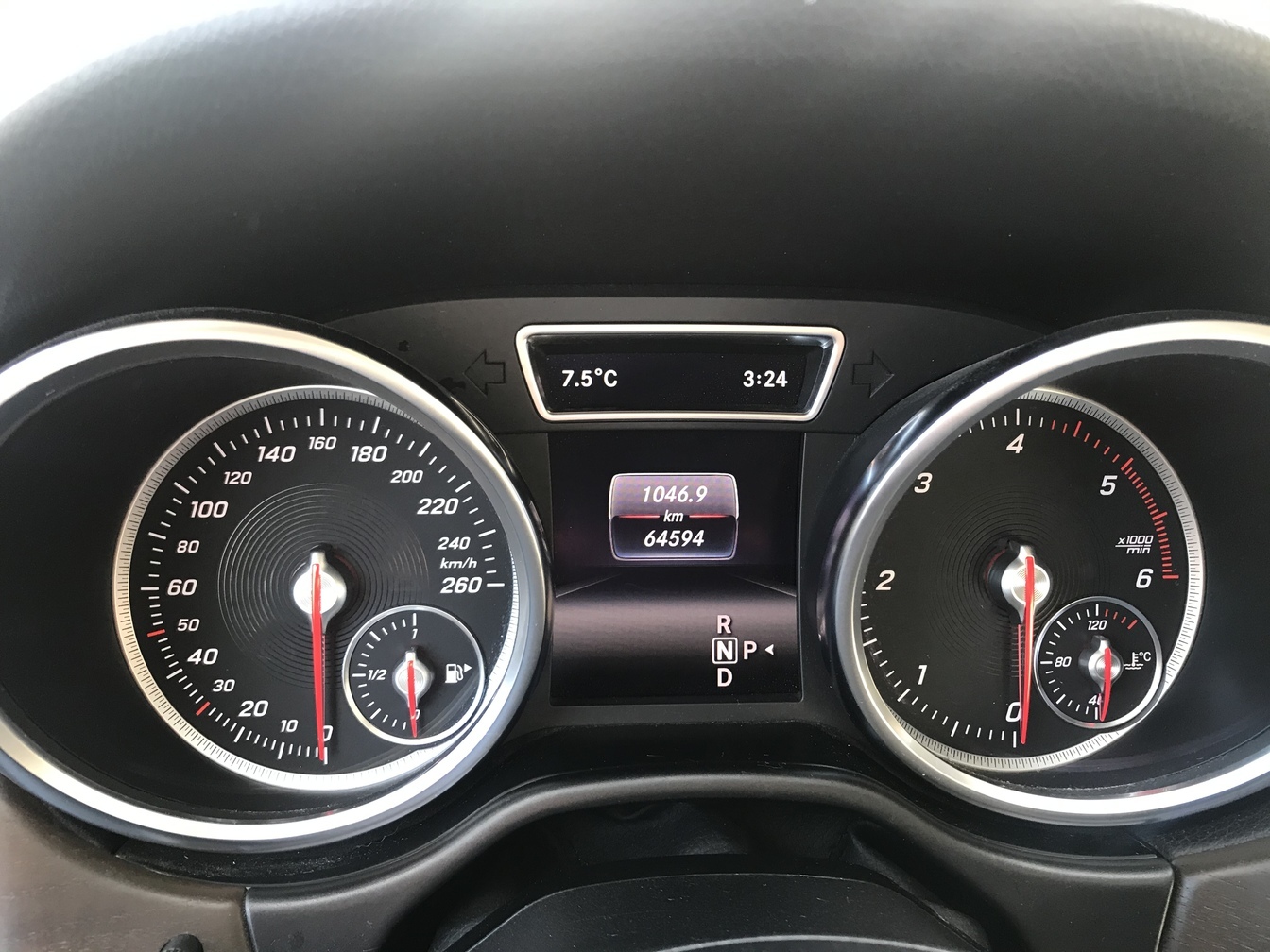 On the highway, the GLE rides like it looks like it rides: with a big, heavy and solid character. It doesn’t float on an elastokinematic cloud like a big squishy Lexus or Cadillac, and most drivers in locales with less-than-perfect roads should probably avoid the 21-inch AMG wheels, which look majestic but cause a degradation of ride quality on rough surfaces. On smooth roads, it’s largely comfortable, but discernibly on the stiff side.

Drivers can fiddle with the calibration of the engine, steering and suspension, the latter two being ideal candidates for some fine tuning. At highway speeds, your writer found the Comfort mode sets the shocks too soft for the quick and light steering, which results in a tendency for the GLE Coupe to feel startled by even mild steering inputs, lurching around with each one. Switching the steering to its heavier sport setting helps, adding some weight to the steering system.

A 3.0L turbodiesel V6 with AutoStop and a nine-speed transmission is the entry powertrain, and for most drivers, is the way to go. Other than a slight (two second) delay for startup in cold weather, the diesel engine operates without compromise: it’s smooth, very quiet, and packs effortless low-end torque that’s dispatched in two unique ways, depending on the position of the drive selector dial.

In comfort mode, the throttle is lazy, and the nine-speed automatic upshifts often and early, the tachometer needle flitting around under 1,500 revs while the GLE Coupe surges quietly along on a torque tidal wave. Call on sport mode, and gears are held longer, more of the engine’s torque is served, and the GLE Coupe downright scoots when given the boots.

Output is rated at 249 hp and 457 lb-ft though fuel mileage landed at just 11.2 L/100 km on my watch. That’s a powercurve meatier than a case of Baconators, and all with a fuel bill some 2 L/100 km better than a (considerably less powerful) Honda Pilot or Nissan Pathfinder, for where and how I drive. My mileage figure tied a recent test drive of a Santa Fe 2.0T, driven in similar conditions. All said, the diesel engine gives you more power and saves you money, which basically makes you a genius.

Other notables include the Climate Control REST function, which keeps the heat on a few minutes after you turn the engine off, so you return to a warm cabin after a quick trip into a store. The LED headlamps are fantastic too – bright, thick light far up the road, early engagement of reflective surfaces, and reduced eye strain after dark were noted. The Harman Kardon stereo is another fantastic travel partner, complete with vivid and bright audio reproduction. You’ll run out of eardrum long before this stereo runs out of firepower.

With enough camera, laser and radar hazard-detection to run a NORAD base, the GLE Coupe can fine-tune your steering inputs in relation to your lane markings, alerting of elevated collision risks and lane departures, and even steer you back into your lane if you’re vacating it without a corresponding signal. In typical Mercedes fashion, the systems work with a fine-tuned polish and precision, prove largely consistent, and work with minimal second guessing.

I will note that twice, the lane keeping assist function became confused about my intentions, trying to nudge me into the left lane when I wanted the right. Both instances occurred on a dark and rainy drive, at the opening of a passing lane on a two-lane highway. The erroneous steering nudge is slight and easily overpowered, though it may be distressing to some drivers. Remember – the system can only nudge the wheel slightly, not take full control.

Ultimately, if you’re lucky enough to be shopping in this pricing ballpark, the GLE 350d Coupe hits the mark for unique looks and exclusivity, a gorgeous cabin, heaps of tech, and maybe even a little surprisingly, for some fantastic sports ute capability and functionality beneath it all, and with a highly respectable fuel bill.

By and large, it’s a rolling selection of virtually all positive attributes on offer from models in its genre – once you get past the unconventional looks and driving position a little.

About Justin Pritchard
Justin Pritchard is an automotive journalist, consultant, TV presenter, and photographer based in Sudbury, Ontario.
Follow me
You may also like
Latest Articles
﻿