Not all automaker collaborations lead to the synergies and efficiencies that were expected or intended when they were announced. But, when done right, they can lead to some really cool cars that wouldn't have existed otherwise. The autoTRADER.ca Find of the Week is one of the best of those examples. What happens when you take German performance know-how and apply it to the classic American two-seat convertible? It's a 2005 Chrysler Crossfire SRT-6.

In many ways, the Daimler Chrysler merger wasn't an overwhelming success. It did however, give Chrysler access to some of the German automaker's underpinnings like chassis, suspensions, even engines and gearboxes. Even today Chrysler is still using some of the chassis work they got in the 1998 joining of companies.

One of the most interesting cars developed between the two manufacturers during this time was the Crossfire. A rear-drive, two-seat sports car. In a time when the Chrysler's lineup was almost entirely front-drive sedans and vans (Viper excluded) where could they find the bits to build a roadster?

Turns out, they could find it in the Mercedes-Benz lineup. The Mercedes-Benz SLK was one of the multiple compact luxury roadsters that arrived from Germany in the late 1990s, along with the BMW Z3 and Audi's TT. Itself a smaller C-Class, the SLK's architecture was deemed to be a perfect fit for Chrysler's own image-improving car.

The Crossfire shared close to half of its parts with the SLK, all under the skin. Styling was 100 percent Chrysler. Not as extreme as some of the offerings coming from the company and its brands at the time, like the Prowler, but still cool. And more practical than the Prowler could ever be.

And there was an unexpected side benefit of using that Mercedes-Benz platform, coming from the craftspersons in Affalterbach. AMG.

You see, in order to launch a rival to BMW's M Roadster and cars like the Porsche Boxster S, Mercedes-Benz let the AMG high-performance team loose on the SLK. The result was a supercharger and intercooler bolted on to the V6. Horsepower, not initially the strong point of the SLK, was now abundant - bumped from 215 hp to well over 300.

Chrysler hadn't yet gotten to the time when they could offer 700 hp V8s, but they were all over that AMG SLK under the guise of their own Street and Racing Technology brand that had previously made hot Neons and was about to release a 6.1 L V8-powered 300C and Dodge Magnum.

So the Chrysler Crossfire SRT-6 was born. 330 hp from that V6, along with 310 lb-ft of torque. Of course, there were suspension upgrades as well. Stiffer springs, new dampers, larger brakes, and higher-performance tires.

Exterior upgrades included a new bumper and that great big rear wing. The car was available as the hard top coupe, or as a convertible. It arrived with a splash in 2005.

Now the car had go to match the looks. It was a sharp looking car then and is still eye-catching today.

2005 saw the most Crossfires built, but this was never a high-volume car. The SRT-6 was even more rare still, with only around 1,300 built.

That makes this 2005 Chrysler Crossfire SRT-6, for sale in Winnipeg, a bit of a unique choice. And a bit of a bargain AMG as well. The seller says this car has every option but navigation, though on a car from 2005, that's probably a perk not a downside.

It's a German performance car with American styling, so it's sharp looking and sharp handling. And it might be just what you're looking for this summer for top-down cruising. 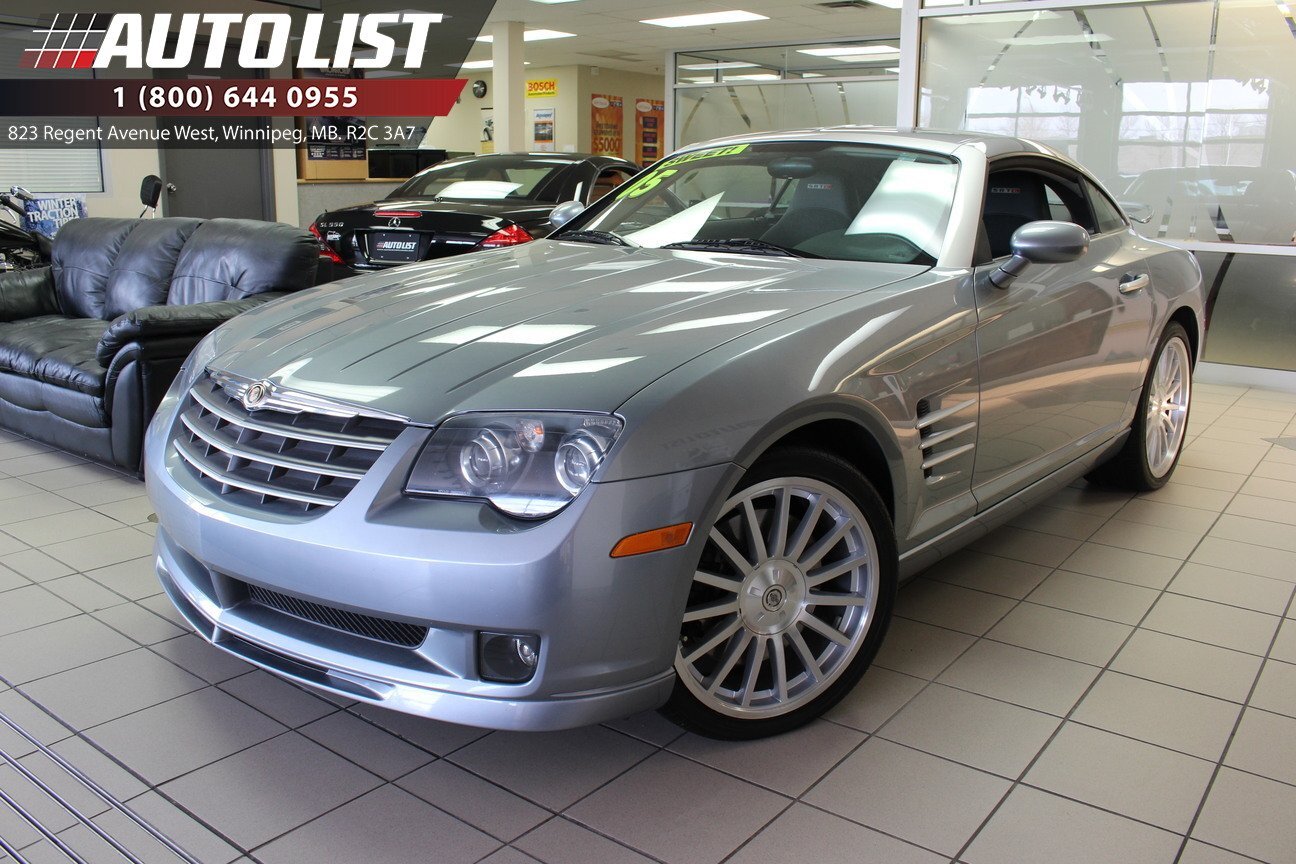