The Big Apple played host to one of the most dazzling (literally: there were fireworks involved) vehicle launches in recent history. So much so that we needed a day to collect our wits and contemplate the most significant announcements and worthwhile reveals.

Here are our favourites from the 2017 New York International Auto Show. 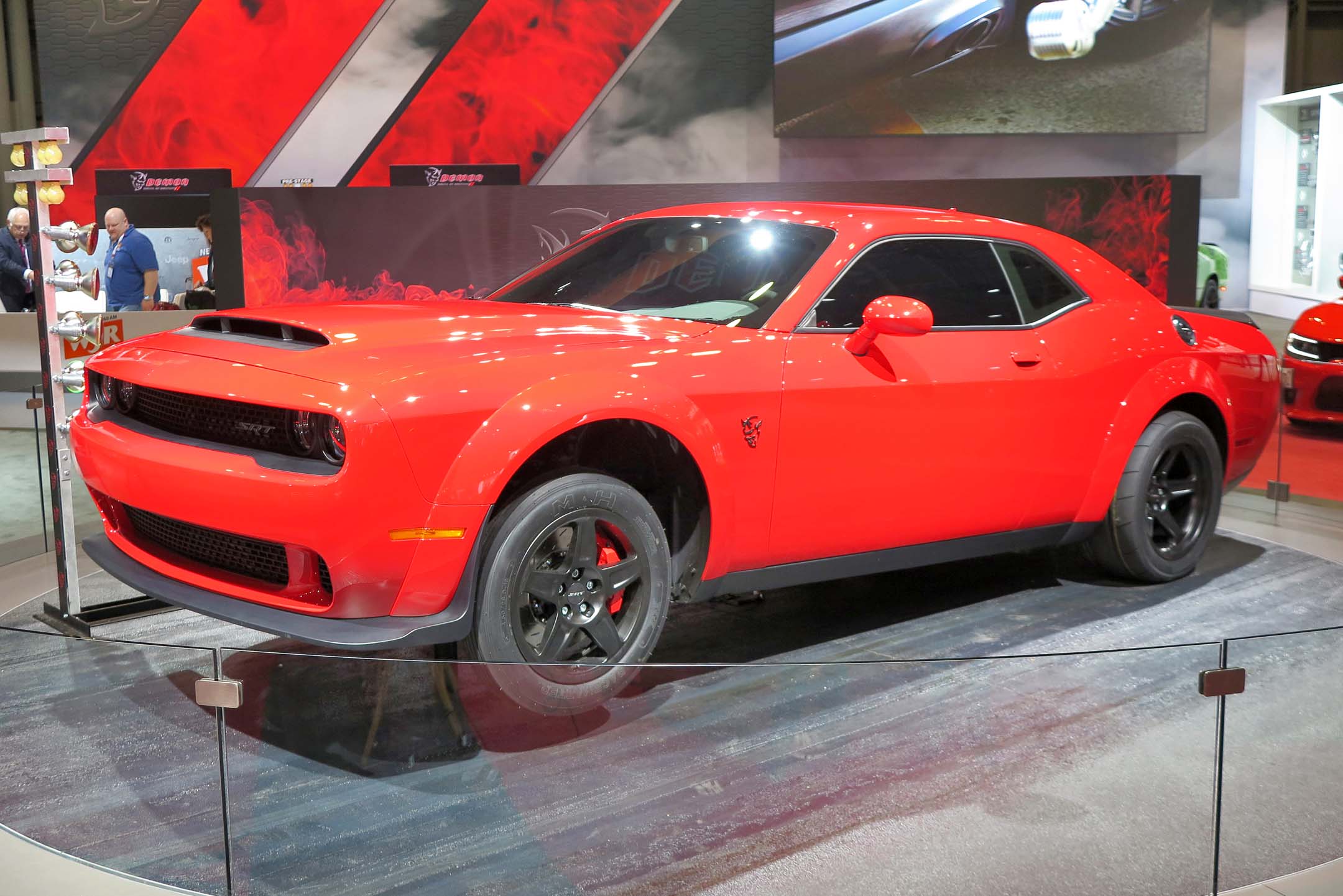 Lesley: I hesitated when making the Dodge Demon my choice for Best in Show, because clearly, this is a ridiculous car with very little justification for its existence. Not to mention the fact that a Demon should be a Dart, not a Challenger. In these days of dwindling resources, crowded roadways and environmental sensitivity, does the world really need an 840 horsepower car?

Evidently, the answer is a resounding “Hell, yes!” Thanks in part to an explosive reveal complete with pyrotechnics, burnt rubber and Fate and Furious star Vin Diesel, the Demon generated the biggest buzz of the show. Aside from hardcore Mopar fans with a penchant for the quarter-mile, there probably aren’t many people who’d buy a car like this. But that’s not the point – as a halo car attracting attention to the brand, the Demon is the perfect nasty ambassador.

Dan: I know this is the obvious choice, but I’ve gotta go with the Demon on this one. The way they introduced it was unlike anything I’d ever seen before at the show, making even the Viper reveal at this same show five years ago seem pedestrian. Then Vin Diesel showed up. Then the specs were thrown down, and it was all over. 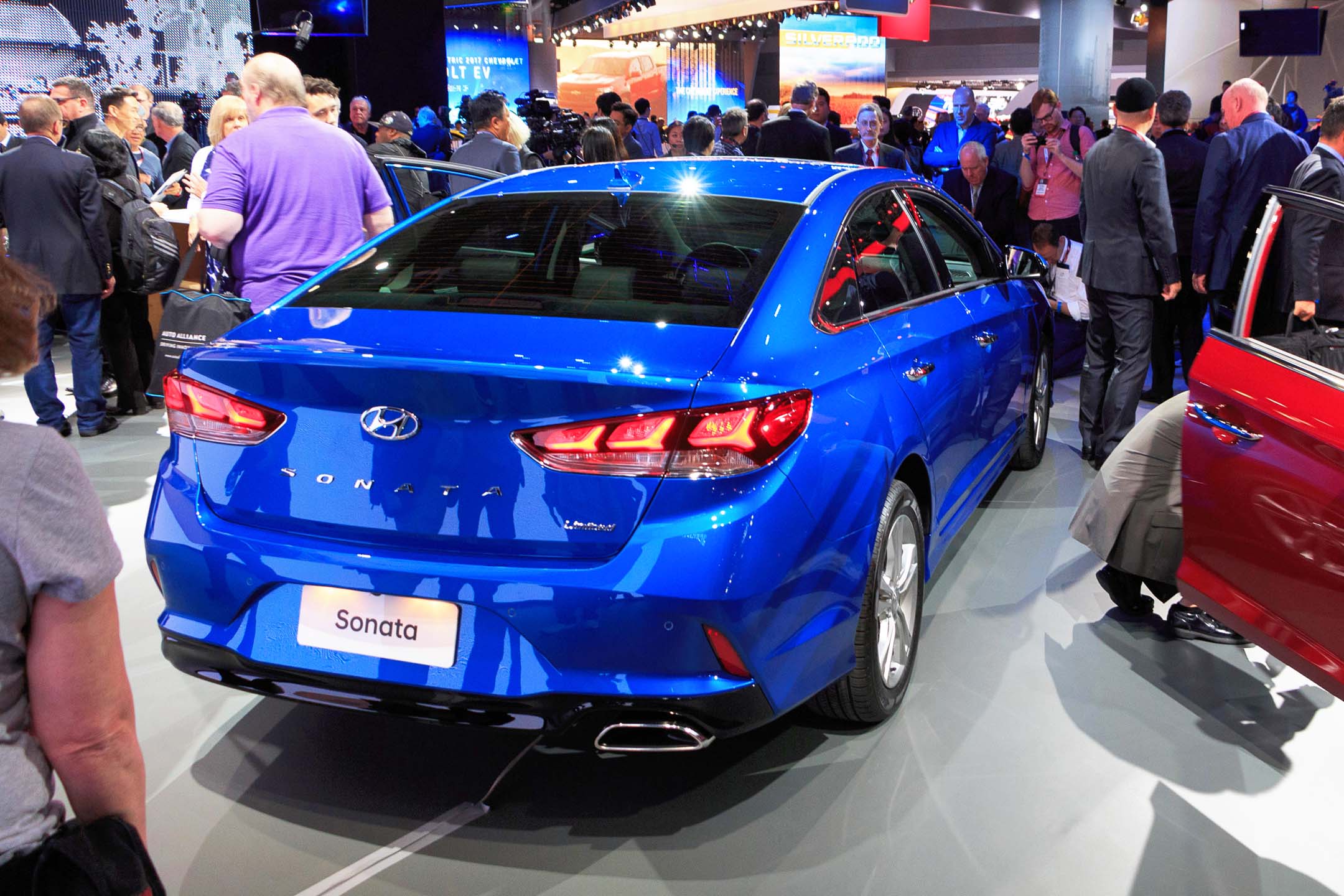 Evan: The popular choice is the Dodge Demon, but after seeing Dodge’s constant stream of “teasers” I’m tired of hearing about it – like the 2010 Camaro that we saw everywhere for half a decade before it went on sale. I’m probably never going to see one in my province either, let alone drive it. So my pick is the 2018 Hyundai Sonata. It’s a huge styling improvement over last year. Hyundai’s new grille, along with the clean rear styling, really look good. Of all the reveals at this year’s show, the 2018 Sonata is the one I’ll see the most of on the road. And I’ll enjoy looking at it every time. 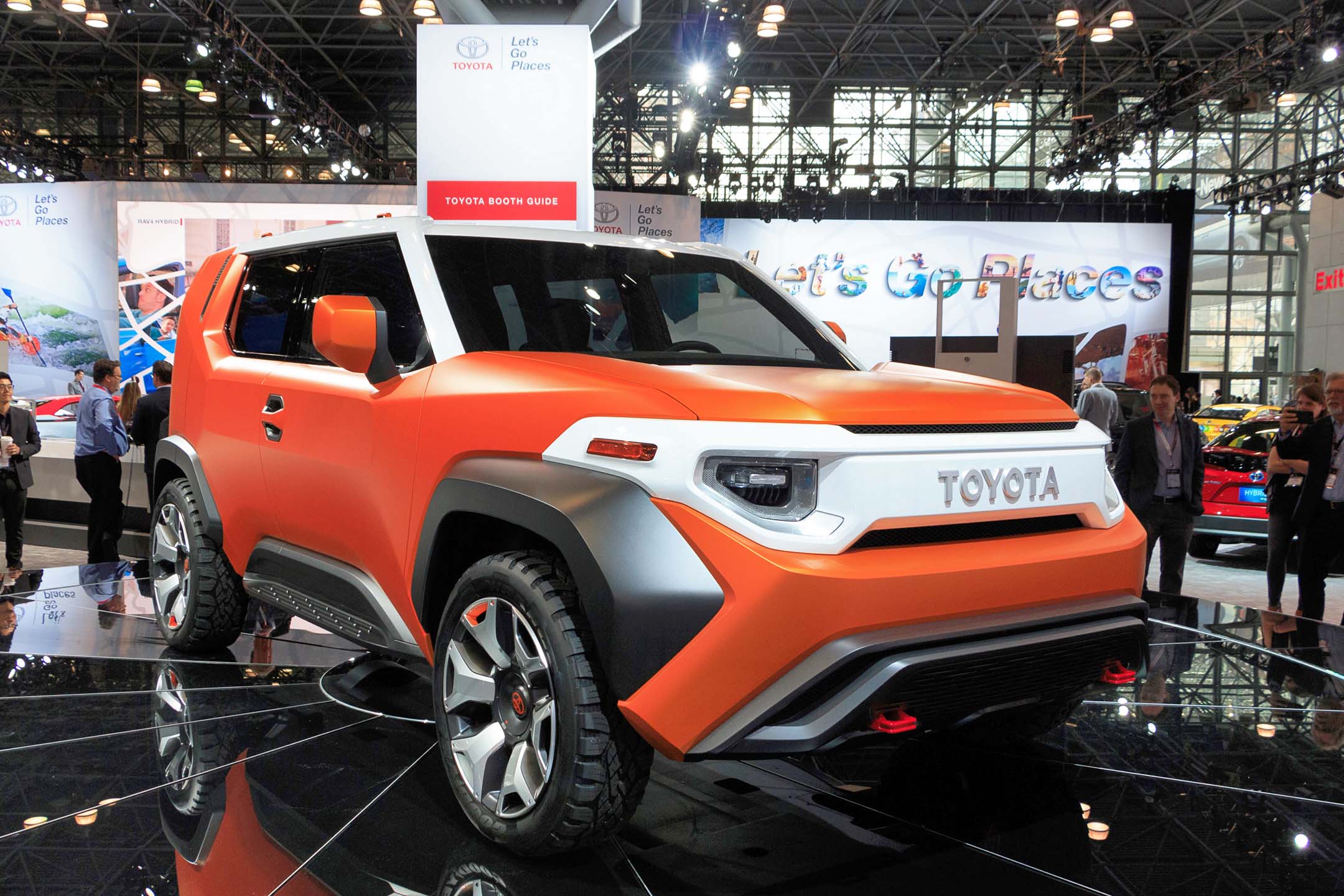 Dan: For me, this has to go to the Toyota FT-4X. I love the “old school meets new school” FJ Land Cruiser styling, especially that all-white front end and tri-colour wheels. The interior with all its removable bits is so out there that it somehow seems even more plausible. I really hope they build this one.

Evan: Toyota’s FT-4X wins best concept from me. It looks like a combination of the Kia Soul and what Honda’s second-generation Element would have looked like, had they made one – pretty cool. The hatch opens either hinges up like a normal tailgate or splits and opens to the side like barn doors. You pick how to open it with a giant handle that would last two months in a Canadian winter. It has built-in GoPro cameras and you can remove the window glass. It has all of the ridiculousness with a hint of reality and is loaded with crazy “real-world” features – the hallmarks of a great concept. 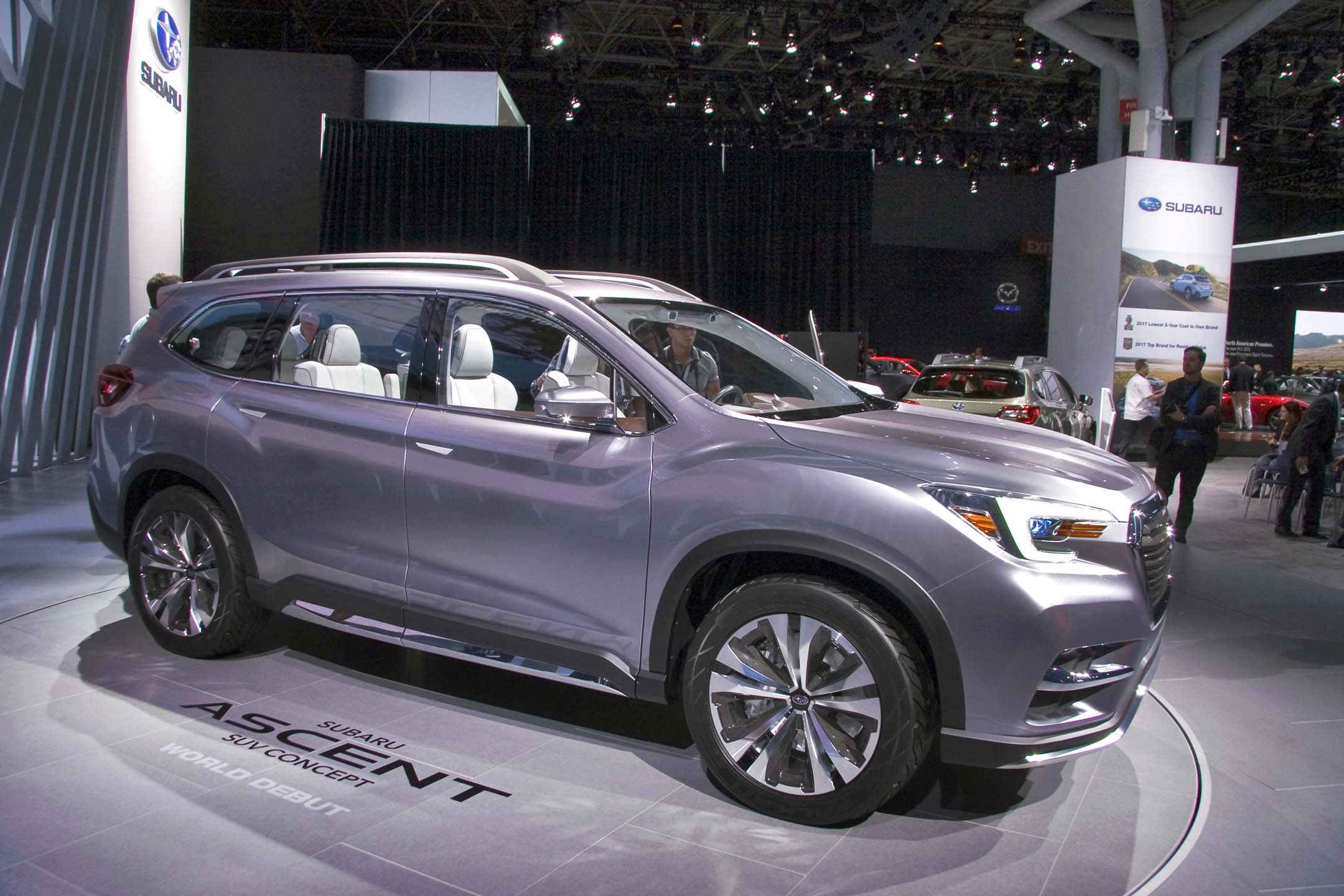 Lesley: Although it’s a concept, the company confirmed that the Subaru Ascent is a pretty accurate representation of the full-size SUV that’s slated to arrive next year. Subaru’s been out of the large SUV segment since the demise of the ill-fated Tribeca, and are hoping the Ascent will capture those buyers looking to move up from their wagon without leaving the brand. The Ascent has a striking presence, with the strong lines, prominent shoulders and signature hexagonal grille characteristics of their “Dynamic & Solid” design language. With premium materials, stitched leather, a sweeping, wrap-around dash and second-row captain's chairs, the cabin’s a luxurious and spacious environment. Built on a modified version of the Global platform that will underpin all future Subarus, the Ascent will be a strategic addition to Subaru’s portfolio. 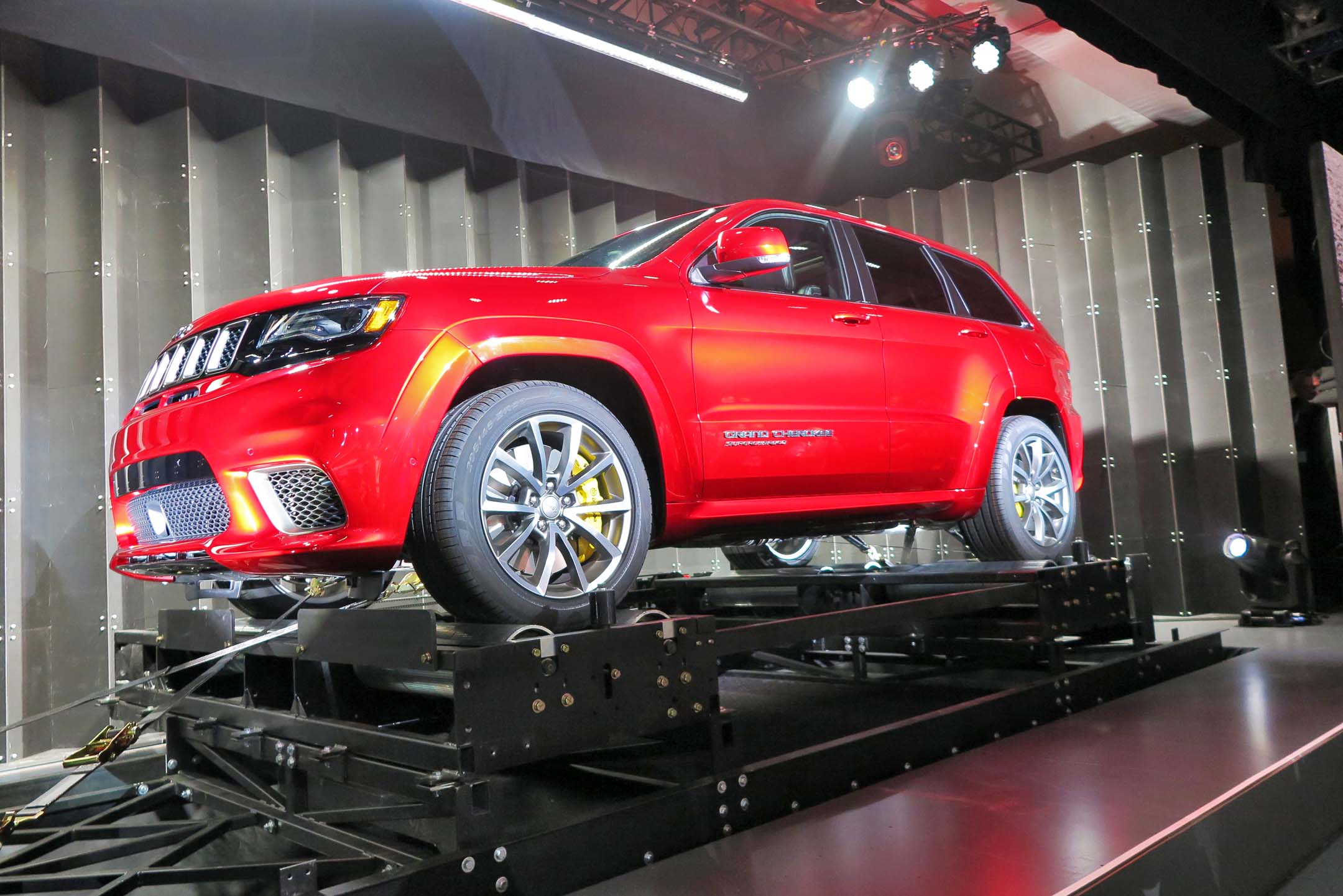 Evan: It had been rumoured for a while, but the idea of its existence made so little sense that it didn’t seem possible. But Jeep did it. They put 707 supercharged horses into a Grand Cherokee SUV. The Grand Cherokee Trackhawk has all-wheel drive, which means that hard launches are the rule, instead of the differential-friendly safety of tire spin. It can hit 100 km/h in under 4.0 seconds, and Jeep claims a top speed of almost 300 km/h. Good thing it has brakes that are larger than the wheels on most economy cars to stop it. The most amazing part of the whole thing is that Jeep has made a drivetrain that they think can handle 707 hp all-wheel-drive launches for the duration of the warranty. 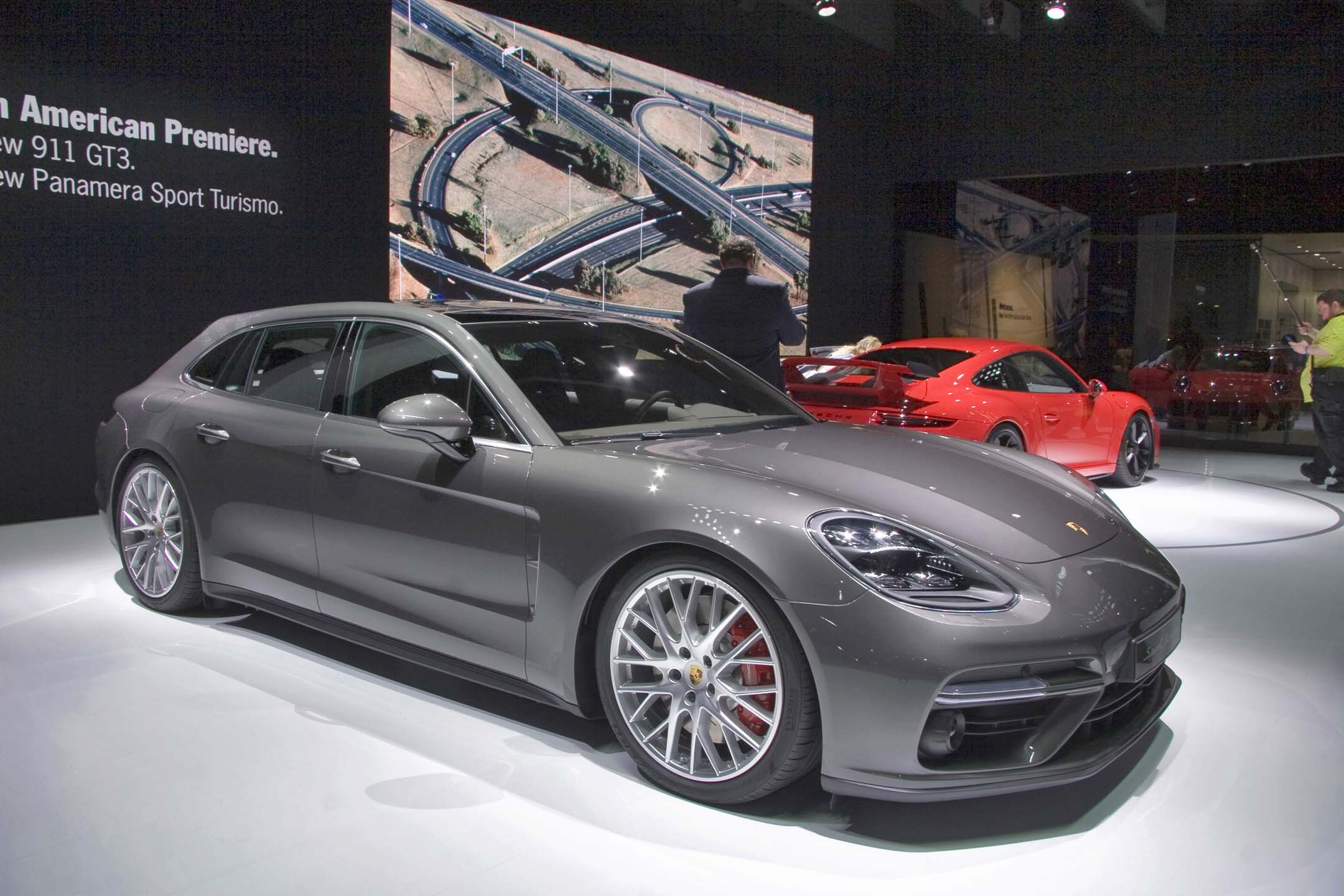 Lesley: The long-awaited estate version of the Panamera has finally arrived, or at least it will by the time the 2018 Panamera Sport Turismo. Even the most vocal of the Panamera’s critics have to admit that they got this one right. The long, clean roofline completely obliterates any trace of the sedan’s awkward rear end, and the end result is one of elegant balance. Long dormant in our market, wagons appear to be in a state of revival – perhaps as an alternative to the ubiquitous crossover. More practical than the regular 2+2 Panamera, the Sport Turismo holds five passengers, and a total of 1,390 litres of cargo space with the rear seats folded down. 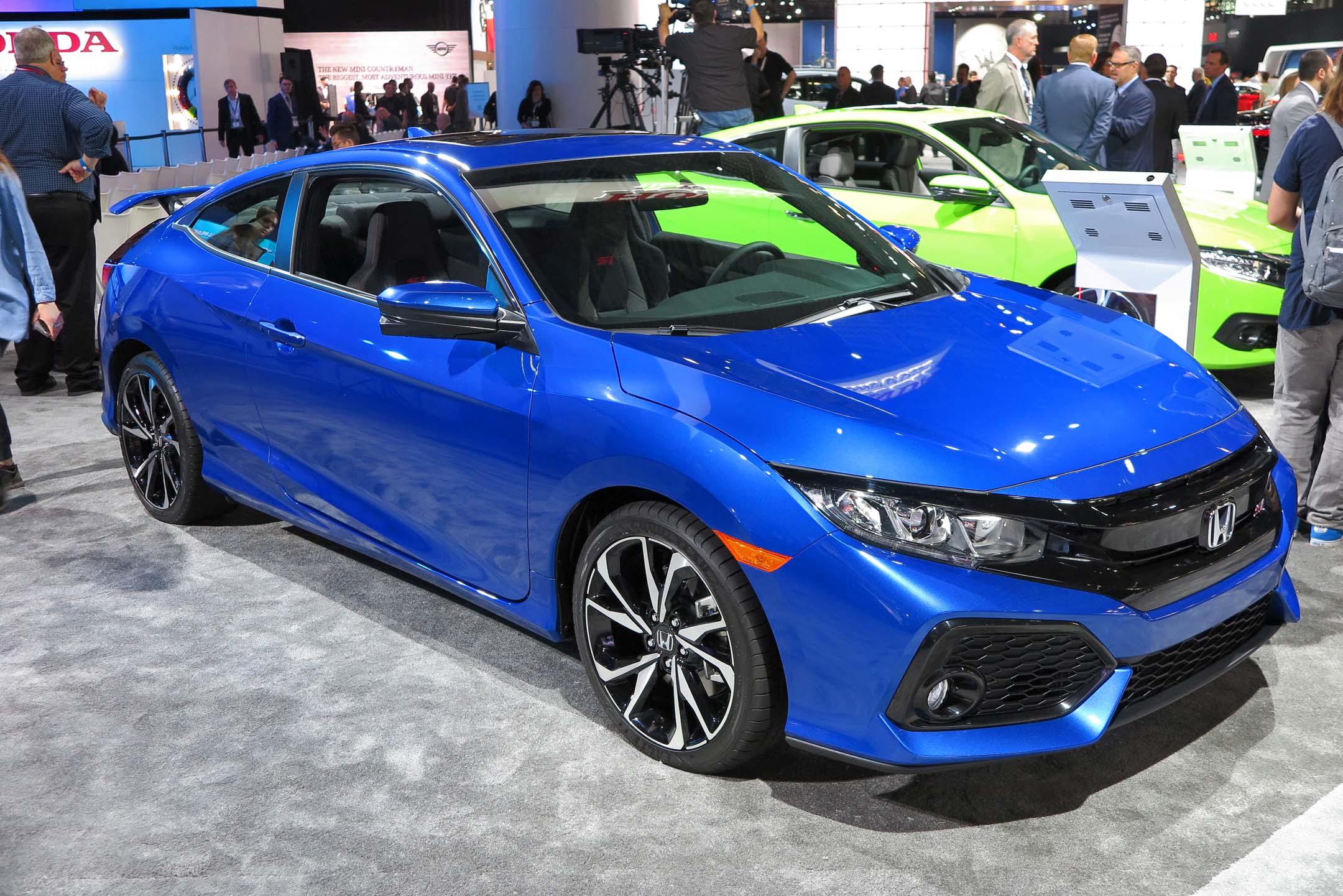 Dan: The latest Honda Civic Si models may not have as much power as was originally expected after the switch to turbocharging, but that doesn't bother me one bit. 200-plus horsepower is more than enough for me to work with, the seats and seating position are perfect, and you know the steering and handling is going to be spot on. Type-R? What Type-R? 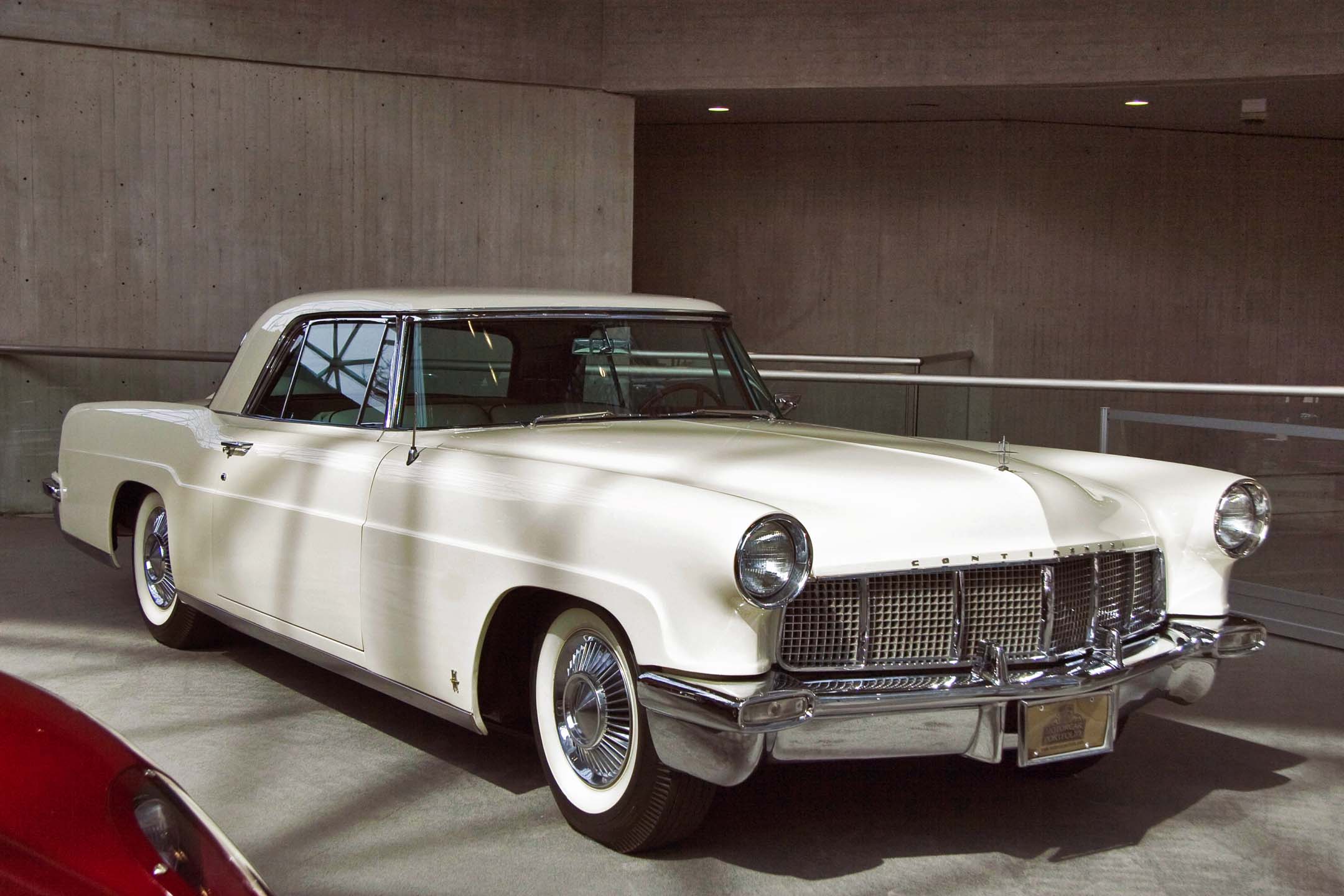 Lesley: Away from the maelstrom of new car unveilings, a classic Lincoln Continental Mark II is tucked into a quiet corner of the Javitz Centre.

A product of Ford’s newly created Lincoln luxury division, the Continental Mark II was a stylistic departure from the American cars of the time. With its clean lines and understated luxury, it eschewed chrome-laden flashiness and sweeping fins, in favour of elegant simplicity. As costly to buy as the Rolls-Royces of the day, the hand-built, fully loaded Continental Mark II was the height of luxury. Under its highly lacquered aquiline hood is a 300 hp 6.03L V8. The car is destined for the Saratoga Auto Auction in September, and is estimated to be worth around $88,000. 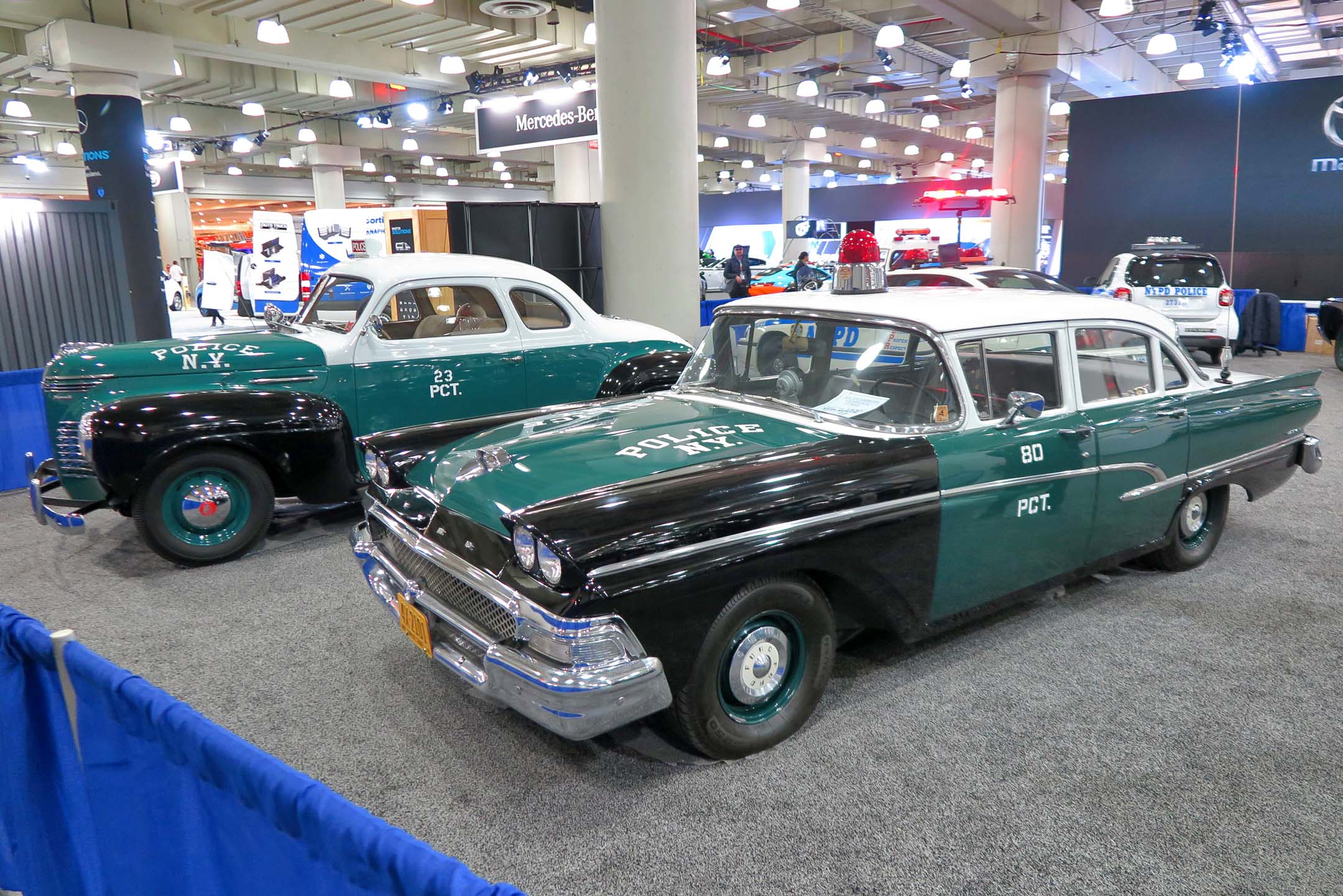 Dan: I feel like it was easily missed considering how deep in the bowels of the Javits Center it sat, but the NYPD exhibit was totally worth a visit. I love timeline-y nostalgia stuff, and this checks all the right boxes. Cruisers dating all the way back to 1940, then on to the first year where they used four-doors instead of two, a Plymouth Fury wagon cruiser, three generations of NYPD livery, bikes – really cool stuff here that I’d love to spend more time with. 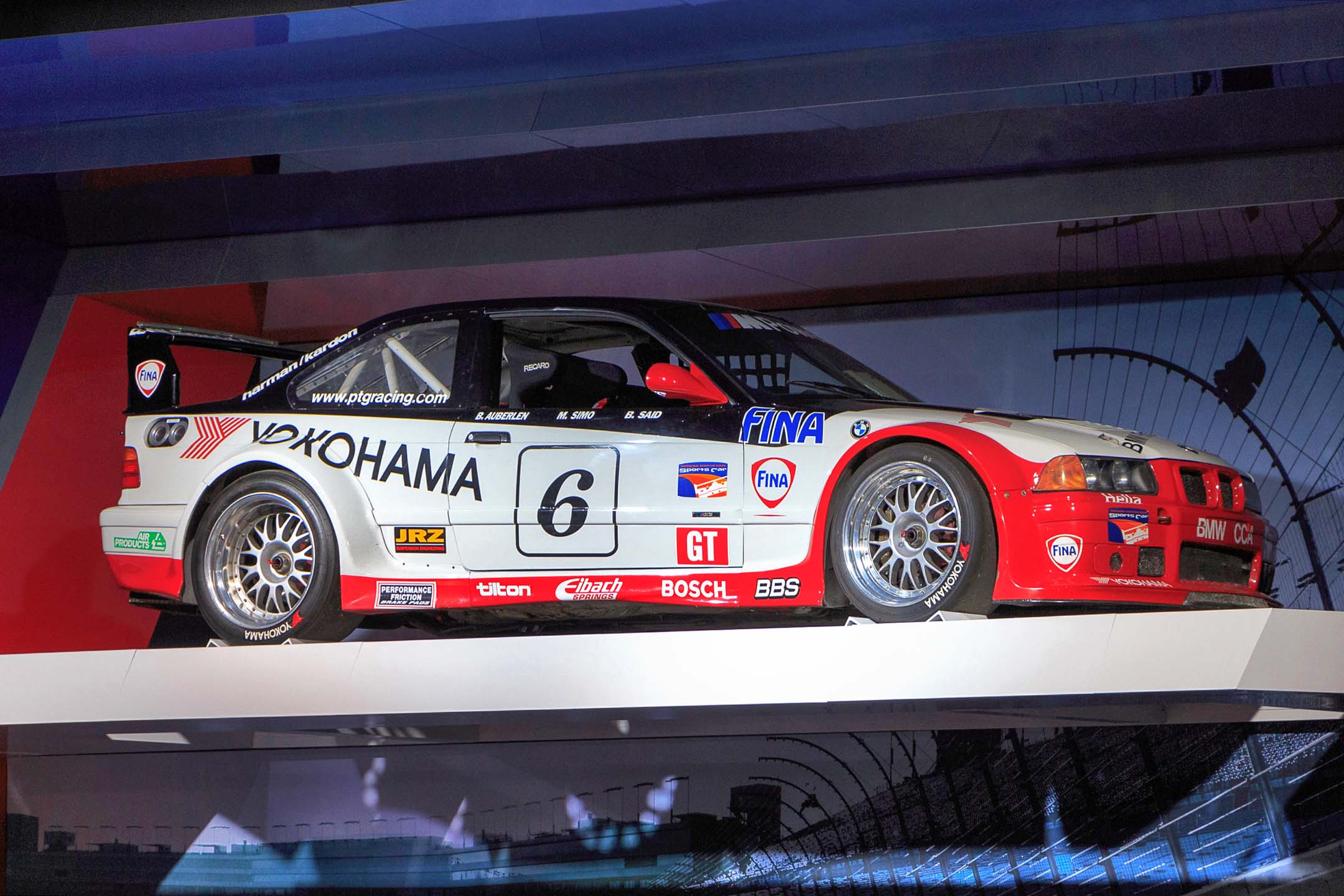 Evan: If you were a racing gamer in 1999, you probably played Sports Car GT. If you didn’t, you missed a great game. But the cover car, and one of the best in the game, was this 1995 BMW M3 race car. The one at the show comes out of the BMW Heritage Collection. PTG, the race team that built the cars, is the reason that we got the wonderful 1995 BMW M3 lightweight. They needed the changes to homologate better race cars. The team’s cars went on to sweep the podium in four races that year. But forget about all that. That wide-body M3 looks beautiful. Where can I get those fender flares for my 328? 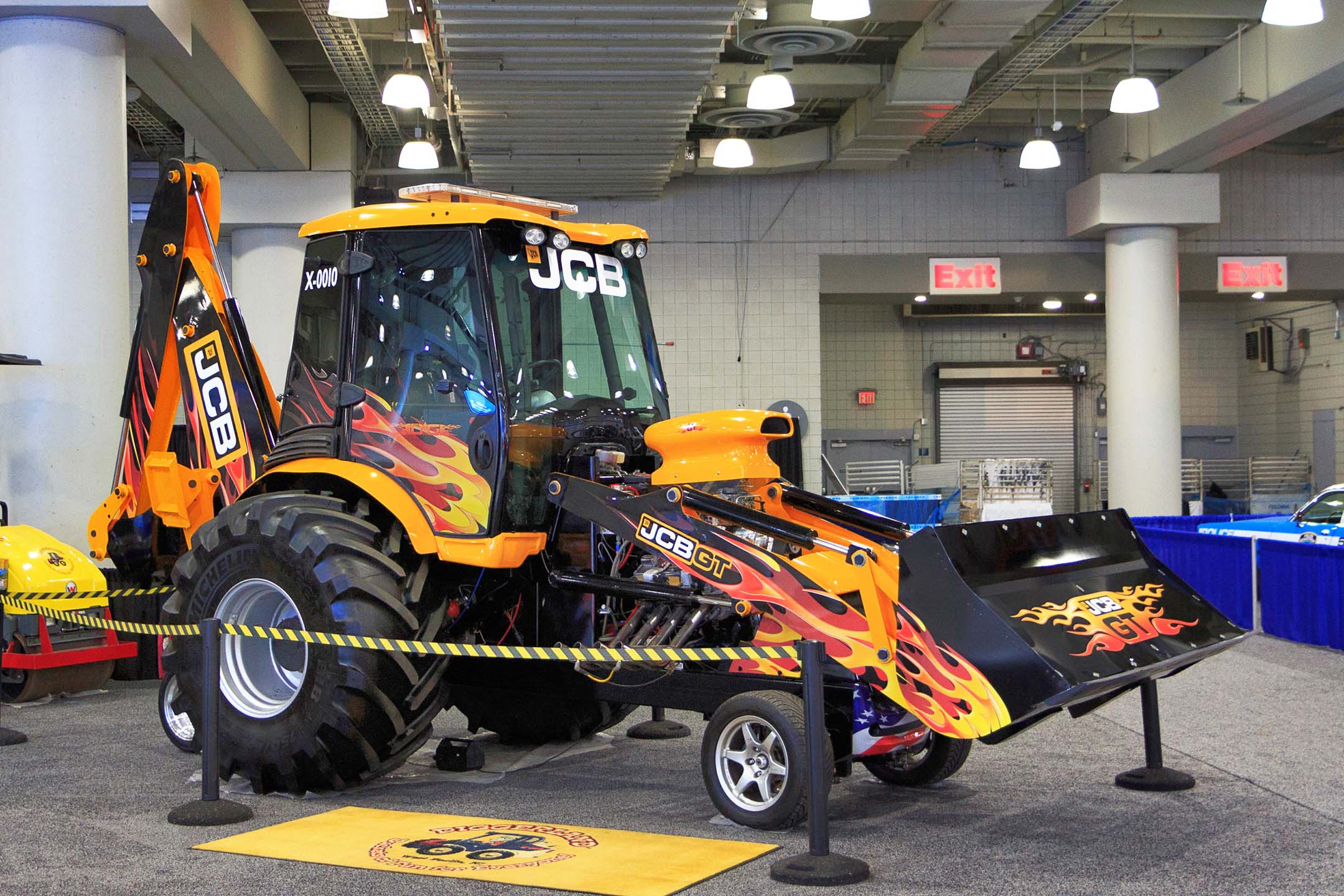 Evan: Wait a second. Is that a digger with zoomies? And a great big blower? Yes, it is. It’s a JCB backhoe with a 745 hp big block Chevy engine and it can do more than 170 km/h. That makes it the fastest backhoe in the world. Take that, Dodge Demon. The JCB GT is at the show because JCB gave it to Diggerland, a heavy equipment theme park. So now I need to go visit a heavy equipment theme park. 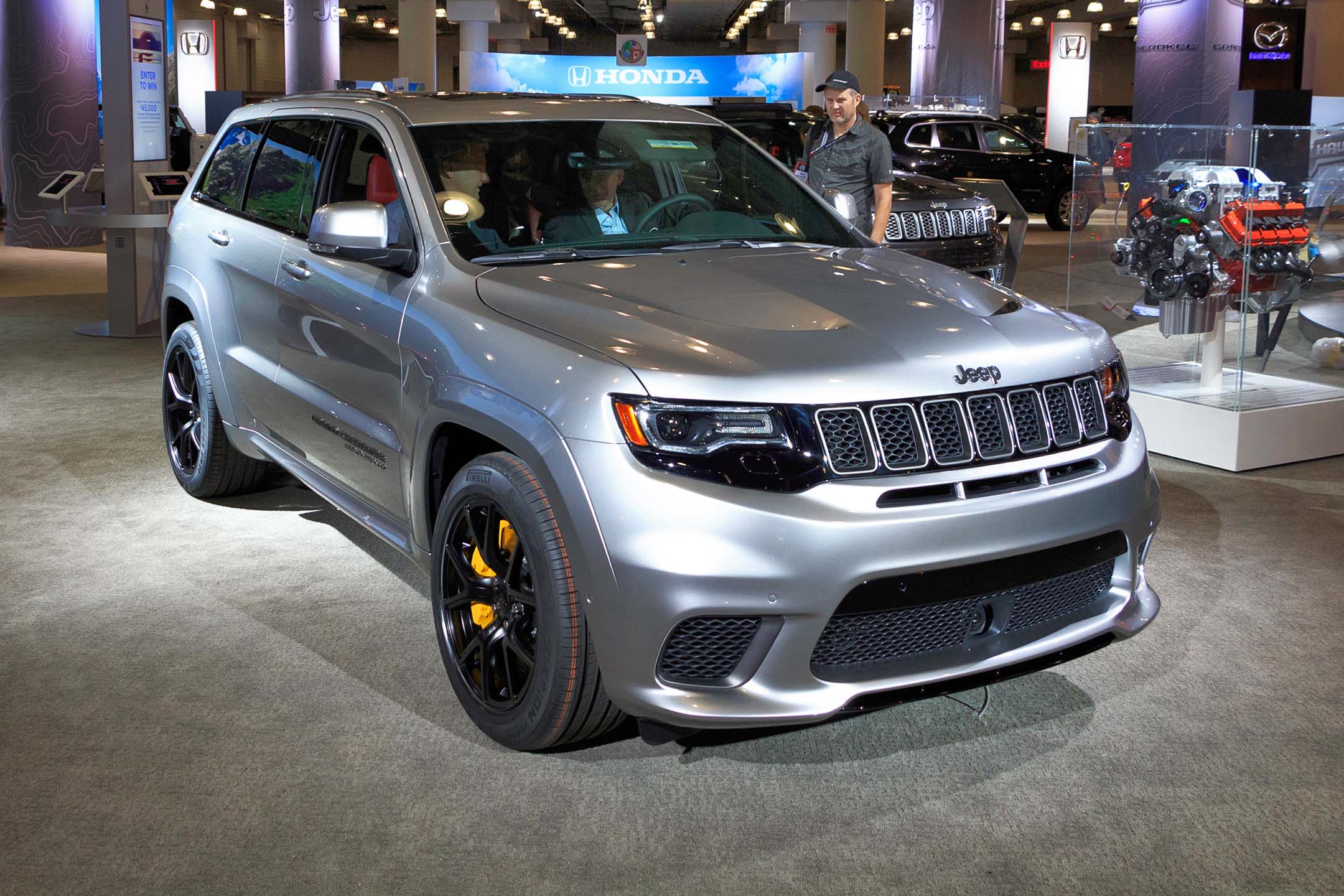 Dan: Jeep Grand Cherokee Trackhawk all… the… way. All the way to 96 km/h in 3.5 seconds, that is! Just when you thought the Demon was going to be all the SRT love we were going to get (or, indeed, going to be able to handle), Jeep came through with a great presentation that would have been top trumps at the show had it not been for the Demon thing. A SUV that makes 707 hp, but can still go from 96 – 0 in 114 feet? With adaptive Bilstein dampers? Sign me up.