Cheyenne Ruether isn’t just a pretty face – she’s a force to be reckoned with on the auto shop floor. The native of Edmonton, Alberta followed in her dad and brothers’ footsteps, tinkering on cars as a child at the age of 6. A decade later, she was certified as a Journeyman Auto Body Refinisher and began painting and refinishing vehicles at various collision shops. Now, at 25, she’s making her mark in Sin City starring alongside Steve Darnell and the Welder Up crew on Discovery’s reality series, Vegas Rat Rods. Ruether is a hot rod and classic car junkie who owns several vehicles including a 1939 GMC truck, a 1959 Chevrolet Apache, a 2017 Cadillac Escalade, and a 2016 Ram 1500. She’s also been spotted driving around Vegas in her boyfriend’s 1954 Ford Mainline. 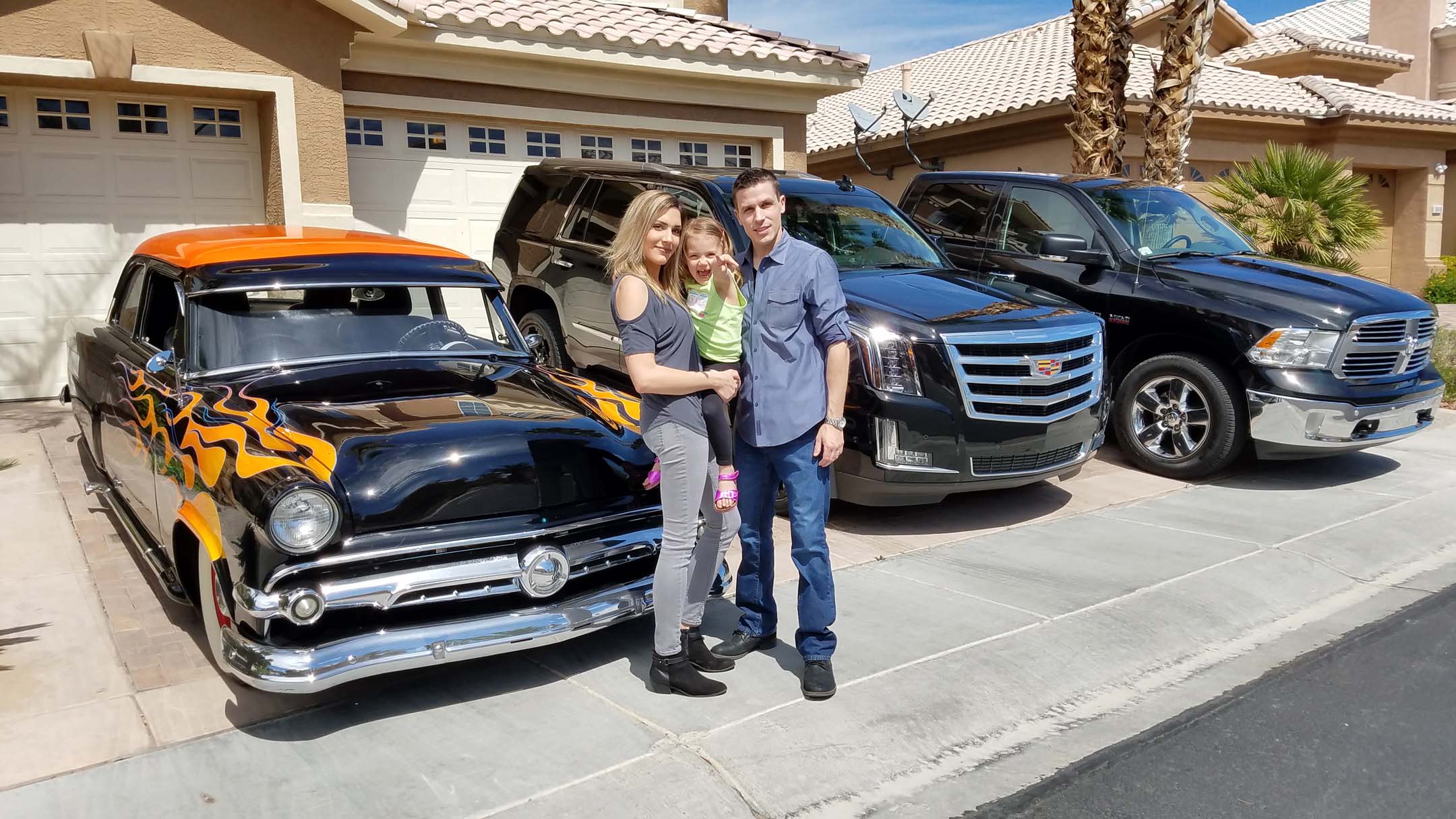 PG: “What sparked your interest in cars?”

CR: “I’ve always been around them my entire life growing up in rural Alberta … My brother and my dad were always tinkering on vehicles. My brother was a mechanic and I decided I wanted to work on cars, too. I’ve been tinkering on vehicles and doing racing, off-roading and demolition derbies since I was a very, very young girl. I started the registered apprenticeship program in Grade 10 and from the first day I started working on cars I never looked back. That was the beginning of all the magic.” 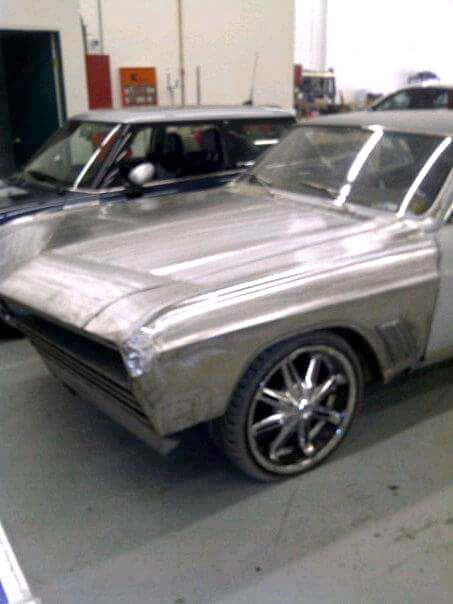 CR: “When I was 18 I bought my first muscle car – a ’67 Buick Skylark. That’s when I really got into the hot rods and classics.

“Usually everyone took me as one of those girls, by the book, doing restorations and paintjobs – complete OEM specs – which is what I did do for my profession, but once I had vehicles on my own account it was like, let’s see what cool stuff we can do to it. You can get away with it when it’s not a customer vehicle.

“My Skylark definitely was my first baby. I customized the front end. I chopped off a whole bunch of parts. Because it was so far gone and I was 18 and didn’t have money to do a full restoration I was like, let’s just wheel this thing down to bare metal, dump clear coat on it, and get a cool, unique rat rod muscle car. We upgraded all of the fuel lines and carburetor. Then we went into the back and put in a racing fuel cell, did a custom front grille, bumper and swapped out all of the little things that needed to be changed out. Everything else was aesthetic. I wanted to make it my first rat rod muscle car, which isn’t very common in my world. Now that I’m at Welder Up, I’ve been laughing, thinking back to those days when I was doing things like that. This is what they do at their shop, too. I’ve come full circle.”

CR: “I literally just sold it this year. We shipped it to a guy in Vancouver because it was a project he had worked on with his dad and his dad had cancer and passed away the year before. I was filming down in Vegas and then moved here. I needed to do something with the car and I decided to sell it to fund some of my moving costs. I’m kicking myself in the butt, now. But it was time. I had my fun with it.” 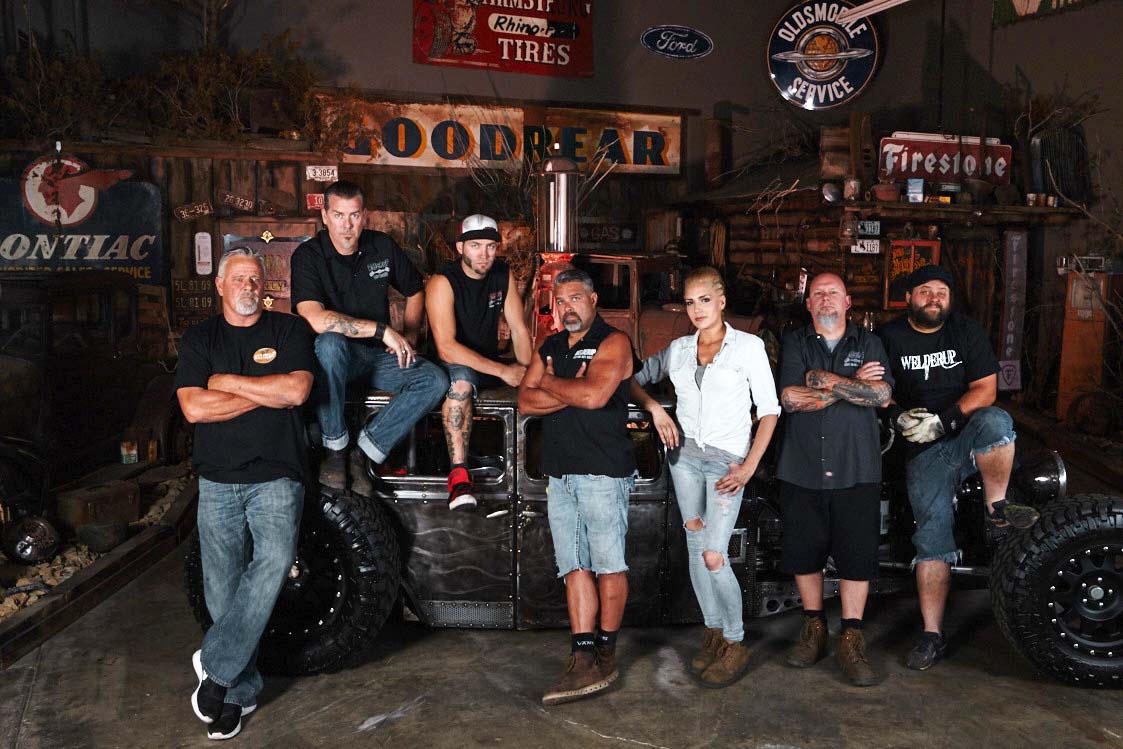 PG: “As a woman is it intimidating walking into the shop with Steve and the Welder Up crew?”

CR: “Honestly, for most women it’s scary for them to go into a shop dominated by men. But it’s something I’ve been used to my entire life. The first shop I walked into was the same thing – all guys. At 16 it was hard. As years progressed I learned more and I got an insane amount of hands-on experience and I got used to it. By the time I got to Welder Up it was the cameras, the production, and the Vegas heat that brought a whole new aspect to that.”

PG: “Some customers must be shocked when they see you wrenching on a vehicle?”

CR: “I’ve dealt with that my whole career. When you’re working and wrenching on a vehicle they’re like, ‘Oh god. Is this girl capable of doing it? Can she hack it? Can she handle all of the men who are constantly watching every move that she makes?’ Honestly, I’ve grown used to it. I walk into a shop and don’t even say anything anymore. I let my work speak for itself. That goes a lot farther than talking about what you’re going to do. People sit there and think here’s this pretty girl walking into the shop and she doesn’t know what she’s doing and then I get in there and within a day their tune changes pretty damn quick.” 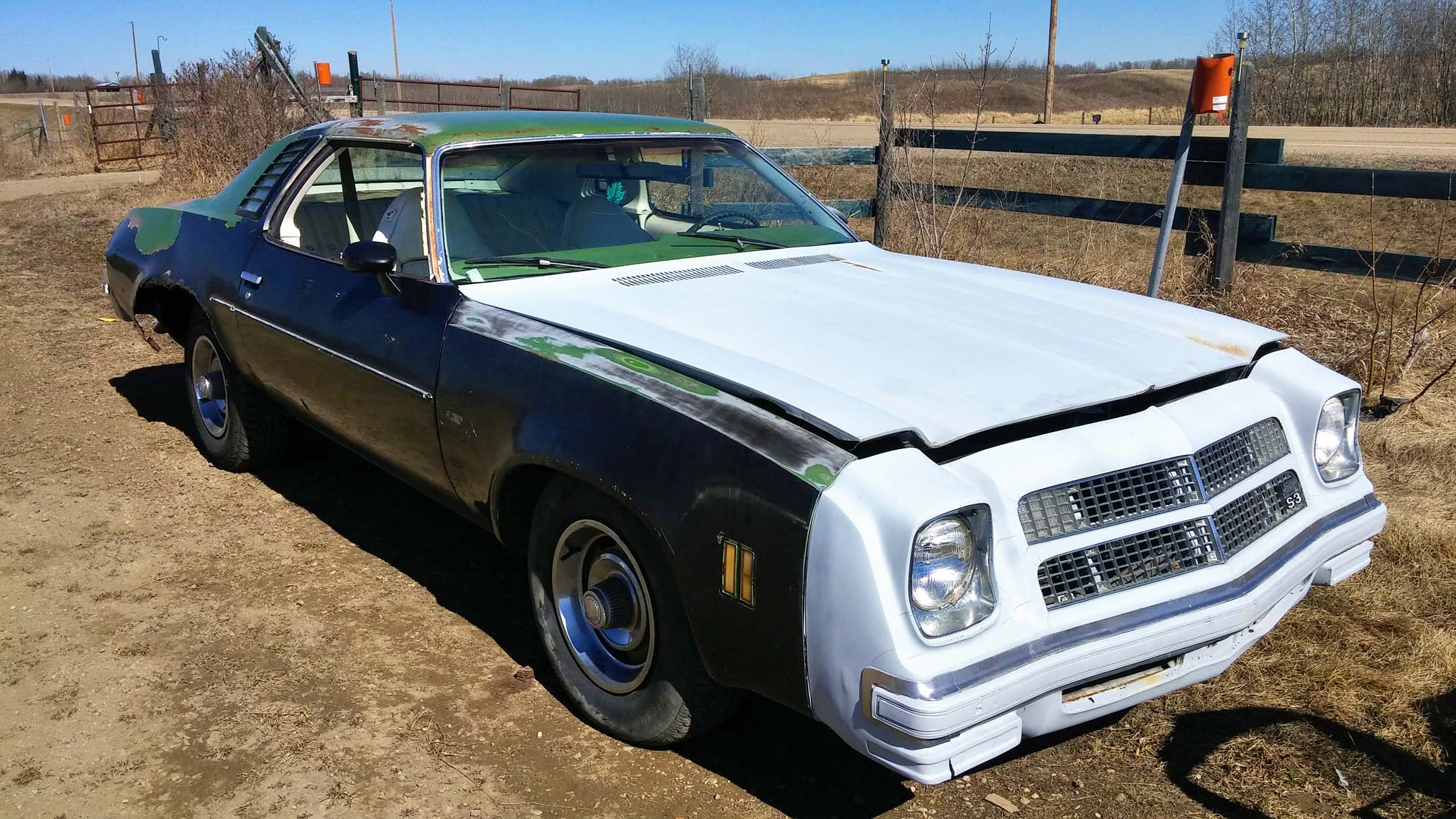 PG: “What else have you owned?”

CR: “I’ve owned 30, 40 vehicles – I’ve lost track. The best one was the ’67 Buick Skylark or the 1976 Chevy Laguna S3 because I could drive that thing everywhere and it had swivel buckets. I loved it! The worst was my first car. I drove it for a few months and I decided to put it into a demolition derby, my first one. I actually won third place out of 14 guys with that car! It was a 1991 Mazda 323 hatchback, piece of crap. Ugliest thing on the planet but I put in a killer stereo system and then eventually I decided to demolition derby it because I hated the car so much. But it won me a trophy and 50 bucks!”

PG: “Have you ever bought or sold a vehicle on autoTRADER?”

CR: “I used to collect autoTRADERs. I would look for the muscle autoTRADERs, the really unique ones, or the really cheap ones. I definitely called in and looked through specific ones that were unique.” 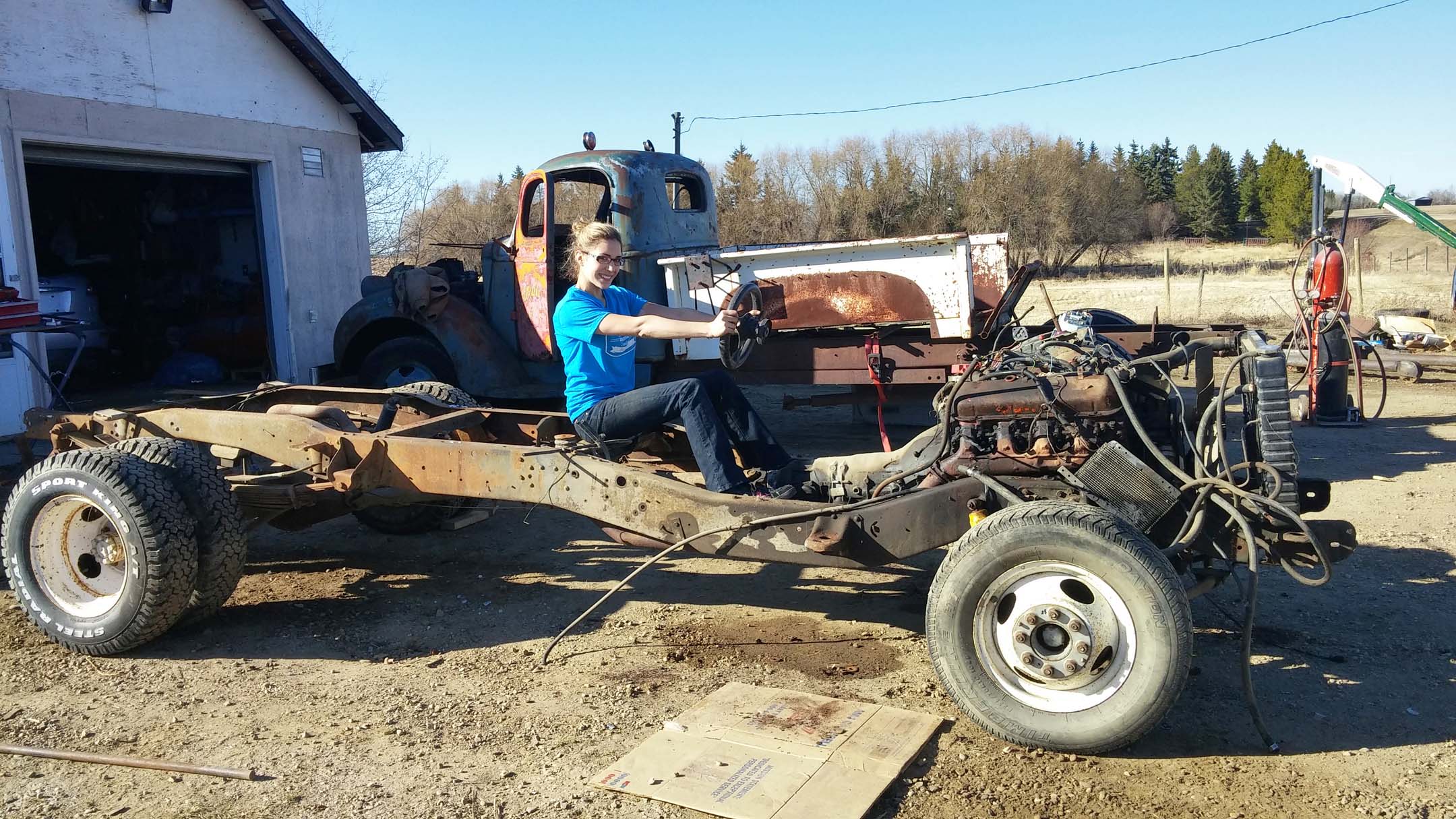 PG: “What do you want to add to your garage?”

CR: “I know it’s a cliché because everybody loves it. I did a complete restoration on a 1970 Chevelle, a 454 car, and I absolutely loved that. I spent a lot of time and energy on it. I’d love to buy it from the customer I painted it for. I loved the body style – anything between ’67 and ’76 – the body styles are great for those muscle cars. I’m naturally attracted to them. I love Chargers, Challengers.”

PG: “But you weren’t even born then! What’s the deal?”

CR: “No. I wasn’t even born then! But I feel like I was meant to be in that era. I was born in the wrong age. I have a natural attraction to those cars – American muscle and classics – I’m just attracted to that style.”

About Petrina Gentile
My world revolves around cars! I'm an award-winning automotive journalist who covers cars for the newspaper, online, and TV.
Follow me
You may also like
AdChoices
Latest Articles