The first “mainstream” supercar built in Canada rolled off the line today, if there’s any such thing as ‘mainstream’ about the 600+ horsepower 2017 Ford GT.

The GT rolled off a new production line at Multimatic, a Markham, Ontario-based race and engineering firm renown for producing a multitude of successful race cars, including the Ford GT-based LM GTE Pro team that won its class at LeMans in 2016, plus another that finished in third place, with a race effort based out of Multimatic Motorsport Europe’s UK-based operations.

Yes, there were boutique exotic machines produced in this country such as the HTT Plethoré, the Quebec-produced sports car that made it onto the Dragon’s Den show looking for investment, as well as the Magnum HK5 introduced in Montreal in 2015, and of course the Nova Scotia-produced Bricklin in the mid-1970s.

But this Ford GT will be the first certified exotic car from an established carmaker built in this country. And with plans to build only 1,000 examples of the carbon-fibre-heavy race car for the street over the next few years, the new GT will certainly out-produce those niche carmakers, will becoming a bright, shiny technologically advanced beacon for all Ford cars.

“It really is the ultimate halo car,” said Raj Nair, officially Ford’s executive vice president of product development and chief technical officer, but unofficially the man credited around Multimatic as the visionary behind the high-tech nature of exotic. “Not only for Ford performance cars, but for all Ford vehicles.” 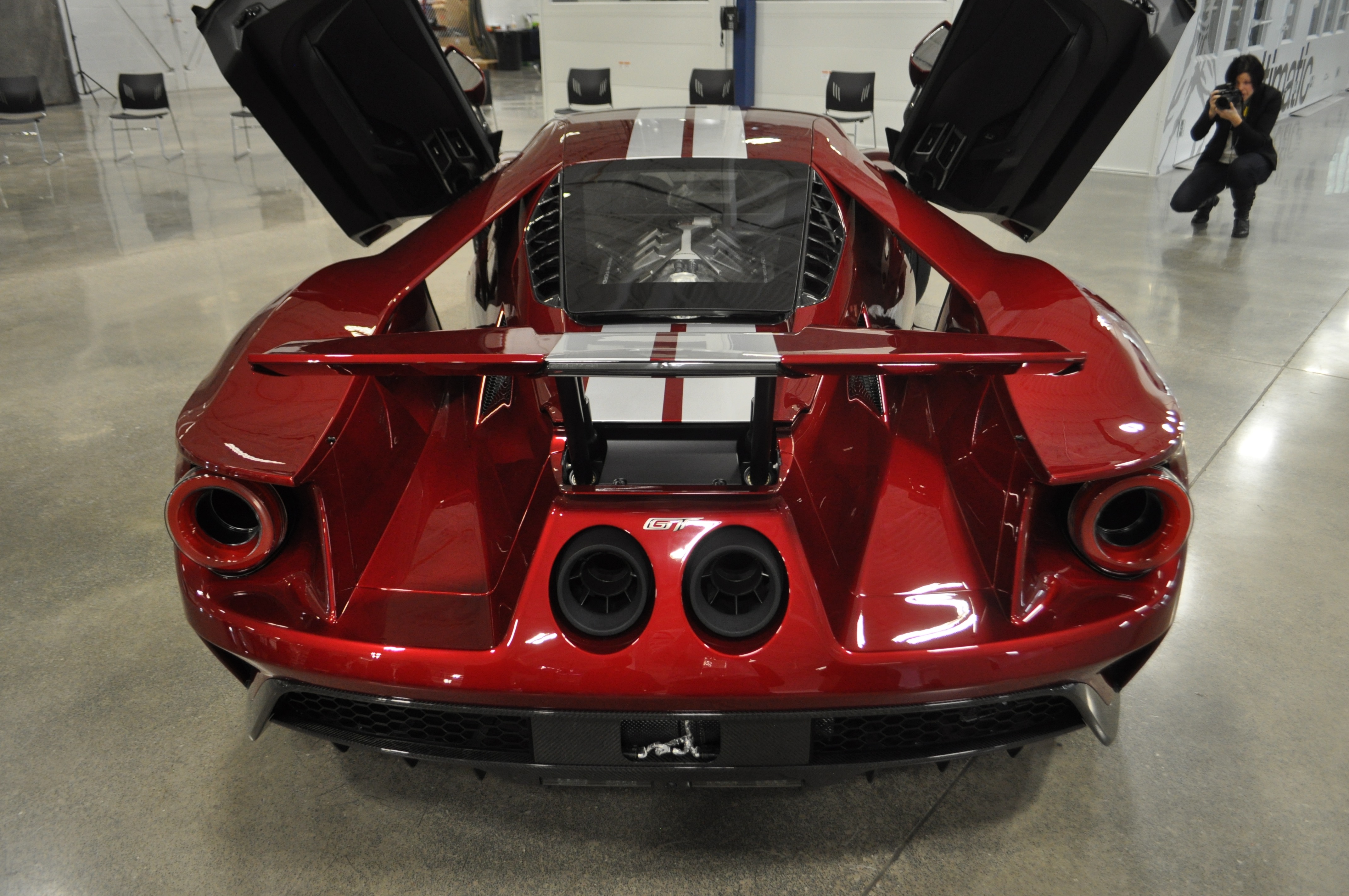 When the first letters went out notifying owners that the vast majority hadn’t been accepted, “there was an outcry,” said Nair, even though about 87 per cent of 2017 Ford GT production went to former ’05-’06 GT or original GT40 owners. “I’ve never received so much email in one day.”

For a production car, there still are many question marks about it. Ford suggests the price will start around US$450,000, though that hasn’t been finalized quite yet. Neither have the final power ratings, which are still undergoing final certification say Ford officials, as well as the fuel efficiency numbers.

So yes, Ford met both of its stated goals with the Ford GT program: win its class at LeMans this year, the 50th anniversary of the original Ford GT40’s big win over Ferrari in 1966, and roll the first production 2017 Ford GT off the line by the end of 2016, a goal announced with the concept car’s debut at the 2015 Detroit auto show. But it’s likely fair to say that it accomplished the former moreso than the latter, with all the details yet to emerge on the car.

Still, Nair heaped praise on Multimatic’s willingness and ability to pull off as ambitious a project as this. “I don’t think we could come up with a better supplier partner,” he said of Multimatic team. “They were the only ones that had the unique carbon-fibre production capability that we needed with this car, so they were the only ones that we seriously looked at that could do this.”

Multimatic’s vice president of engineering Larry Holt says that for large suppliers such as themselves, there’s always lots of interest in producing high volume production pieces, but it’s much different when you’re calling about a car that will build 250 models per year. “When we say 250, it’s like ‘click.’” Multimatic also does quite a bit of mainstream business with Ford as well, building suspension control arms for the F-150, as well as designing its extendable Step gate tailgate.

“Which is one of the reasons why when Ford calls us (and asks us about producing 250 cars per year), we don’t hang up.” 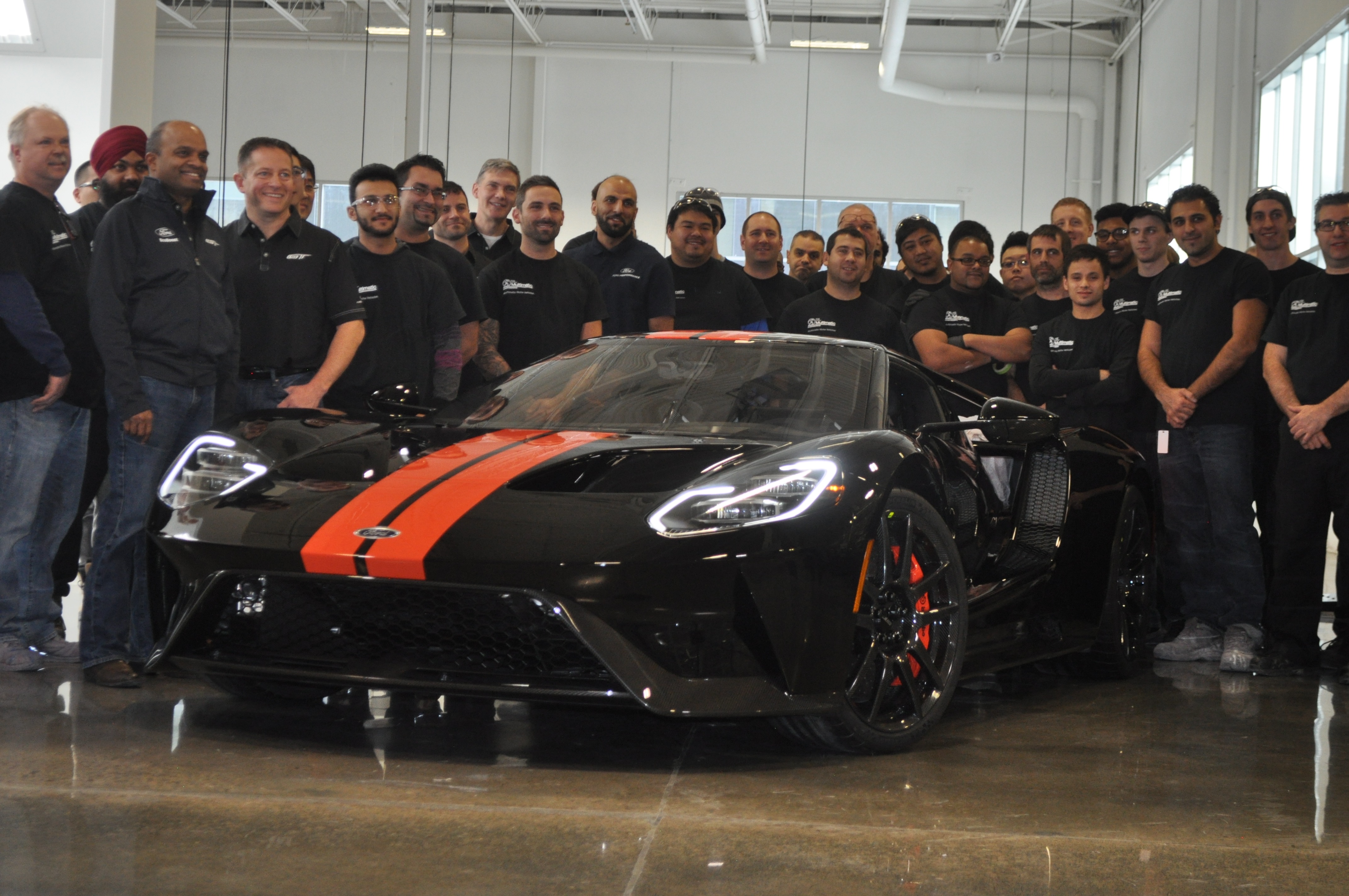 The entire process of building the GT will take about 85 people, and they’re still looking for the last 20 folks with the right technical skills. Once production is fully ramped up, the goal is to produce one per weekday, though it’s closer to two cars per week now, said Holt, with many of the parts still coming from far and wide by courier instead of through normal distribution channels.

“My FedEx bill last month was about 40 grand.”

He’s very proud of what the team at Multimatic has been able to do with the carbon-fibre and the structural stiffness it provides. “Our stiffness numbers are way higher than anything else in the industry,” Holt says emphatically, talking about cars like the LaFerrari and McLaren models.

But it’s not only structural advances with the sumptuously styled GT. The thin body that tapers back into a tiny purse-holding trunk leads to incredible aerodynamic efficiency, while the 3.5-litre V6 should make it remarkably fuel-efficient for such a powerful, non-hybrid car.

Holt said some folks around Ford and the race shop wondered about whether a turbocharged V6 made sense in such a high-end supercar, but he said the vision for technical leadership and to at LeMans were always the uncompromised goals with the project.

“Moray Callum (Ford’s design director) was hugely enthusiastic,” said Holt, and his team did a great job of designing the car to both advance the look of the GT yet make it immediately recognizable as one, while allowing for multiple engineering requests to make it faster or more reliable. “They gave us a lot of stuff.”

About Michael Bettencourt
Michael Bettencourt has been writing about cars and automotive topics for over 25 years, with over two decades as a member of the Automobile Journalists Association of Canada (AJAC). A journalism graduate of Ryerson University, he has won multiple awards for technical, vehicle testing, and green vehicle writing. Currently a judge for the Electric Vehicle Dealer’s Association awards, he bought his first EV in 2011, and follows the EV industry closely.
Follow me
You may also like
AdChoices
Latest Articles