If you had told me a week ago that a) some flapping hairpiece would be leading the free world, and b) I’d be riding shotgun in a 2017 Subaru Impreza, circling Canadian Tire Motorsport Park’s Driver Development Track – with a game retiree from Etobicoke at the wheel, at night – well… I would have called for the men-in-white-coats to pick you up.

Barb Hancock has never been on a race track before and doesn’t own a Subaru, but she follows this short parade of Impreza’s around the dimly lit ups and downs of the DDT with determined focus. She’s here at the 2017 Subaru Impreza VIP Event with her two sisters, Marge and Kate, through an invite from a relative who owns a Subaru.

It’s a girls’ night out, and as Marge notes, “We’re sisters, and actually friends too.” There are at least a couple dozen participants this evening, consisting of existing owners, potential owners and members of the Toronto Subaru Club.

This customer-focused evening is riding piggyback on a daytime dealer orientation event for the all-new Subaru Impreza. With all the cars already there, the Subie marketing folks thought, why not put up a whack of big lights and let some regular folks have a go? It’s a casual, light-hearted affair that includes food, a brief technical run-down of the car followed by some driving exercises that include slalom, braking, an EyeSight safety system demonstration and three leisurely follow-the-leader laps of the DDT. 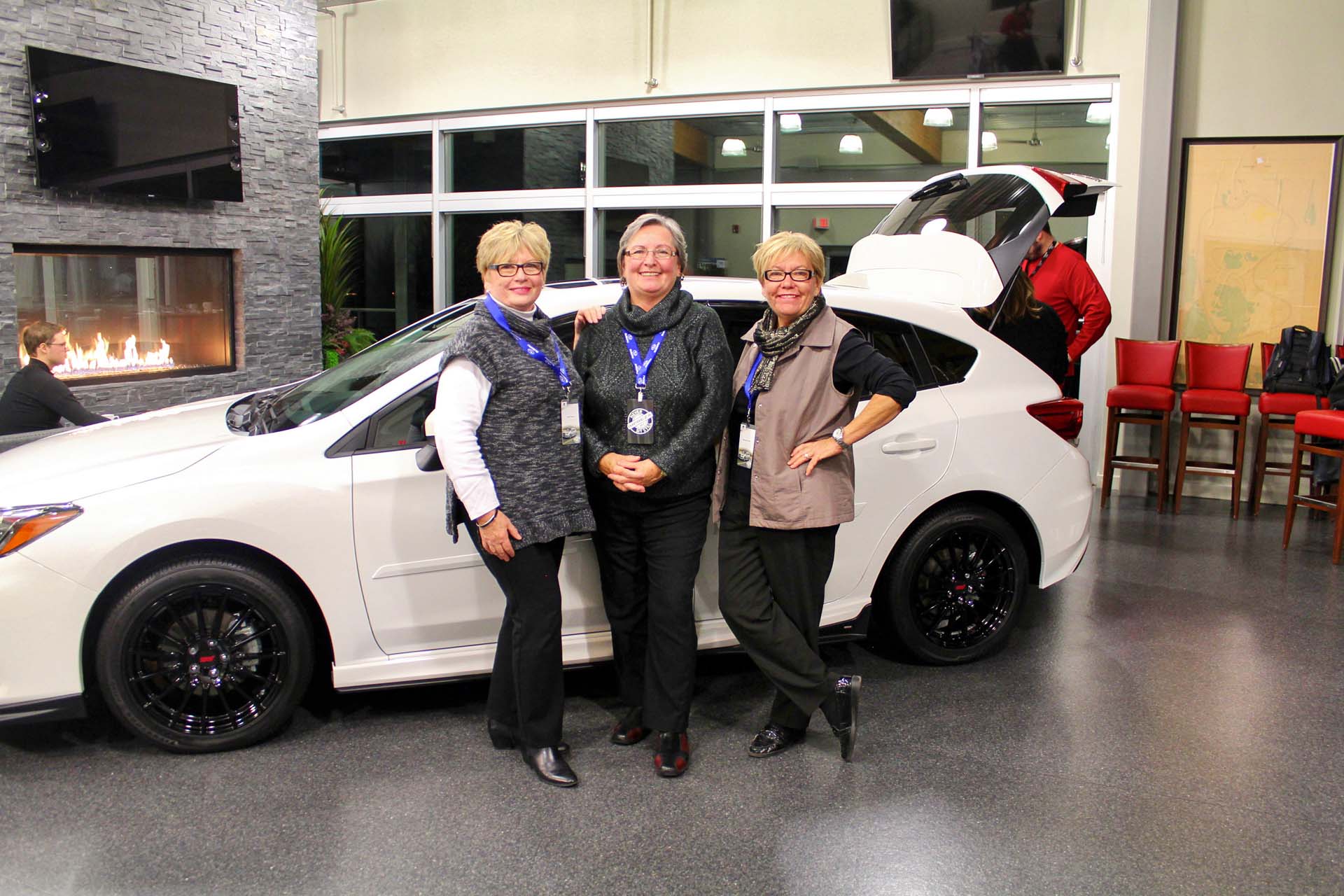 For 2017 Subaru brings us a completely redone Impreza – the first vehicle to ride on Subaru’s new modular Global Platform which is 40 percent stronger and 70 percent more resistant to torsional twisting than the outgoing chassis. Refinement is up, interior noise is down, and of course, it’s all underpinned by Subaru’s symmetrical full-time AWD that provides secure handling and near unstoppable winter progress when equipped with winter tires. Starting price is $19,995.

This Impreza’s new longer, wider and slightly lower body comes across as edgier and more interesting, and cabin quality appears to kicked up appreciably. Rear legroom, already generous in the prior generation, improves thanks to the car’s wheelbase stretch. Cargo space gets an uptick too.

While the old 2.0L flat-four carries over, it gains 4 horsepower (up to 152) thanks to direct injection. Torque output is 145 lb-ft at 4,000 rpm. The Impreza is still no rocket, but urge is certainly adequate and its fuel economy actually beats a number of its front-drive-only competitors.

After the presentation, I jump in a blue Impreza with the sisters and head over to the track. Barb is at the wheel and Katie pipes in, “Don’t worry. She just got her license and she’s 81.” Ah, sisterly love.

In the back I’m finding plenty of legroom and headroom. The low-profile flat-four engine allows for a low cowl and belt line, so outward visibility is excellent too. 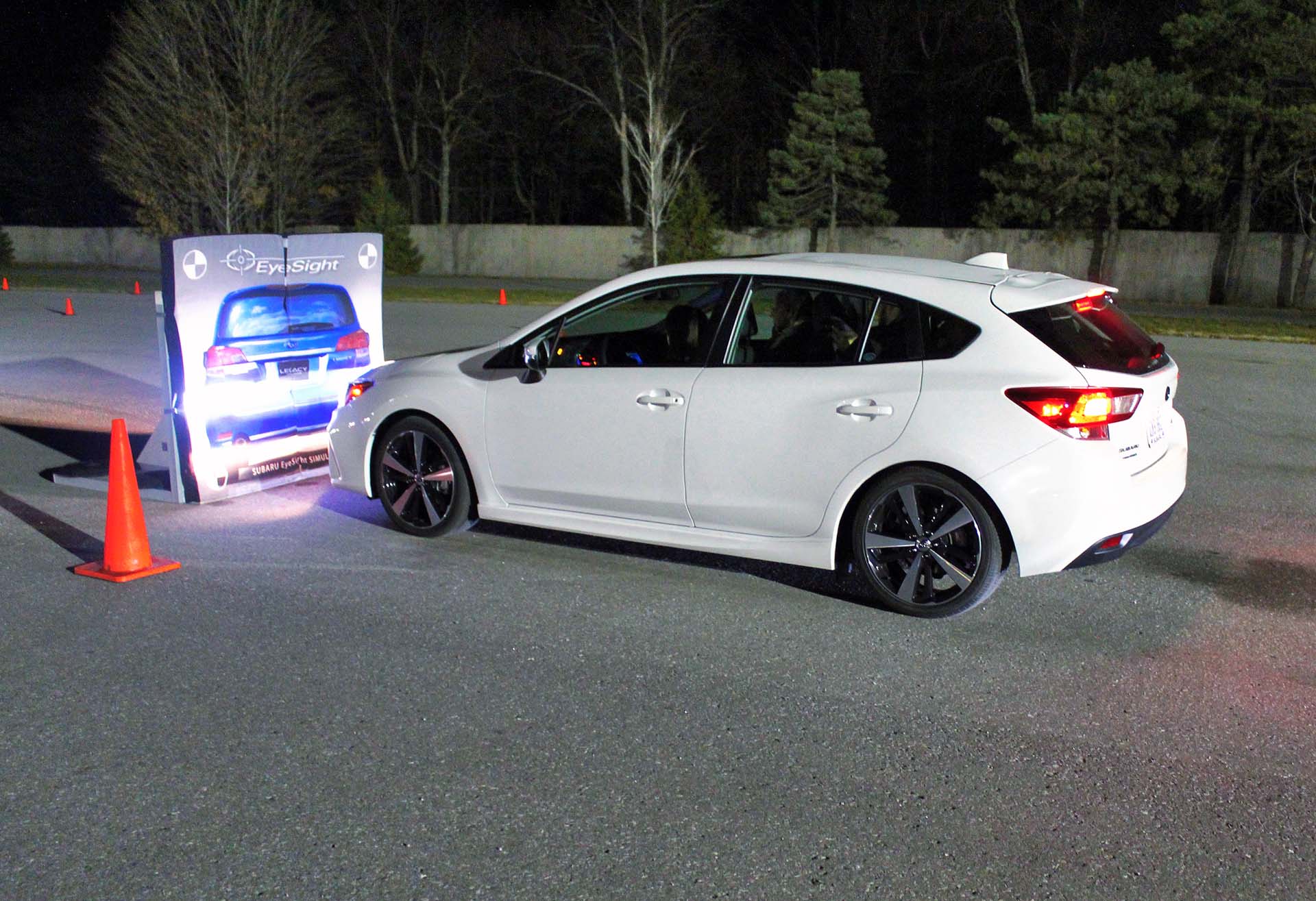 As the evening progresses, I’m hearing much praise for the Impreza’s headlights that steer into corners, as well as its handling, smooth ride and quiet cabin. The real eye-opener here for most is getting to experience EyeSight’s autonomous braking. The first exercise involves accelerating to about 20 km/h and then coasting towards a soft barrier with both feet off the pedals. Hard to do when a collision seems imminent and the car is flashing and beeping at you to pay attention. Once all systems determine the driver has left the building, the brakes violently slam on, bringing the Impreza to a halt within inches of the barrier. Same deal with the reversing exercise that repeatedly avoids killing a plastic trash bin.

I ask Marge if she had a hard time not slamming on the brakes. “Not really,” she says. Katie chimes, “It’s a lot harder for the passenger.”

Much of this event consists of preaching to the converted, as there are a number of long-time Subie owners and enthusiasts present. Rachel and Cole came in from Kingston. She drives a 2012 Impreza Sport and he has a 2015 STi, a 2003 Baja and a 2002 Forester. Susan and Denny from Markham own a 2014 Forester and 2016 WRX, respectively.

But to a person, everybody was having a real good time. Did Subaru sell any 2017 Impreza’s tonight? Possibly. At the very least, they spread the word on this unique combination of practicality, value, economy, ruggedness and all-wheel-drive security, all wrapped in a slightly quirky and very earnest package.

Back on the track, Barb is getting the hang of it. By the third time around she’s much smoother and gaining a wee bit more pace. And despite the smattering of stadium-grade floodlights, visibility is challenging at best. As we pull into the pits, she brims with enthusiasm. “That was fun! And I always wanted to drive a Formula 1 car.”

About Peter Bleakney
Peter Bleakney is a Toronto-based automotive journalist. He is also a member of the Automobile Journalists Association of Canada (AJAC).
Follow me
You may also like
AdChoices
Latest Articles