Being an adult sucks. Let me break it down for you: get up early, go to work, pay your bills, pay your taxes, come home tired, eat your vegetables, try to get smaller versions of yourself to eat their vegetables, watch the news, get depressed, go to bed. Repeat ad nauseam – until something snaps.

Forget the rules, time to break the mould, crank the amp, and kick out the jams. These two little hooligans represent three decades of anti-conformist automotive punk rock: turbos, stick shifts and the truth. They’re the antidote to the banality of the everyday, a chance to skip the vegetables and dip straight into the boost.

First, the Sierra RS Cosworth – the Cossie. A 1986 model in hard-to-find stock trim, this one probably reminds you of the Merkur XR4Ti. Merkur was Ford’s 1980s attempt to inject a little European flavour into their North American offerings, and it mostly didn’t work. 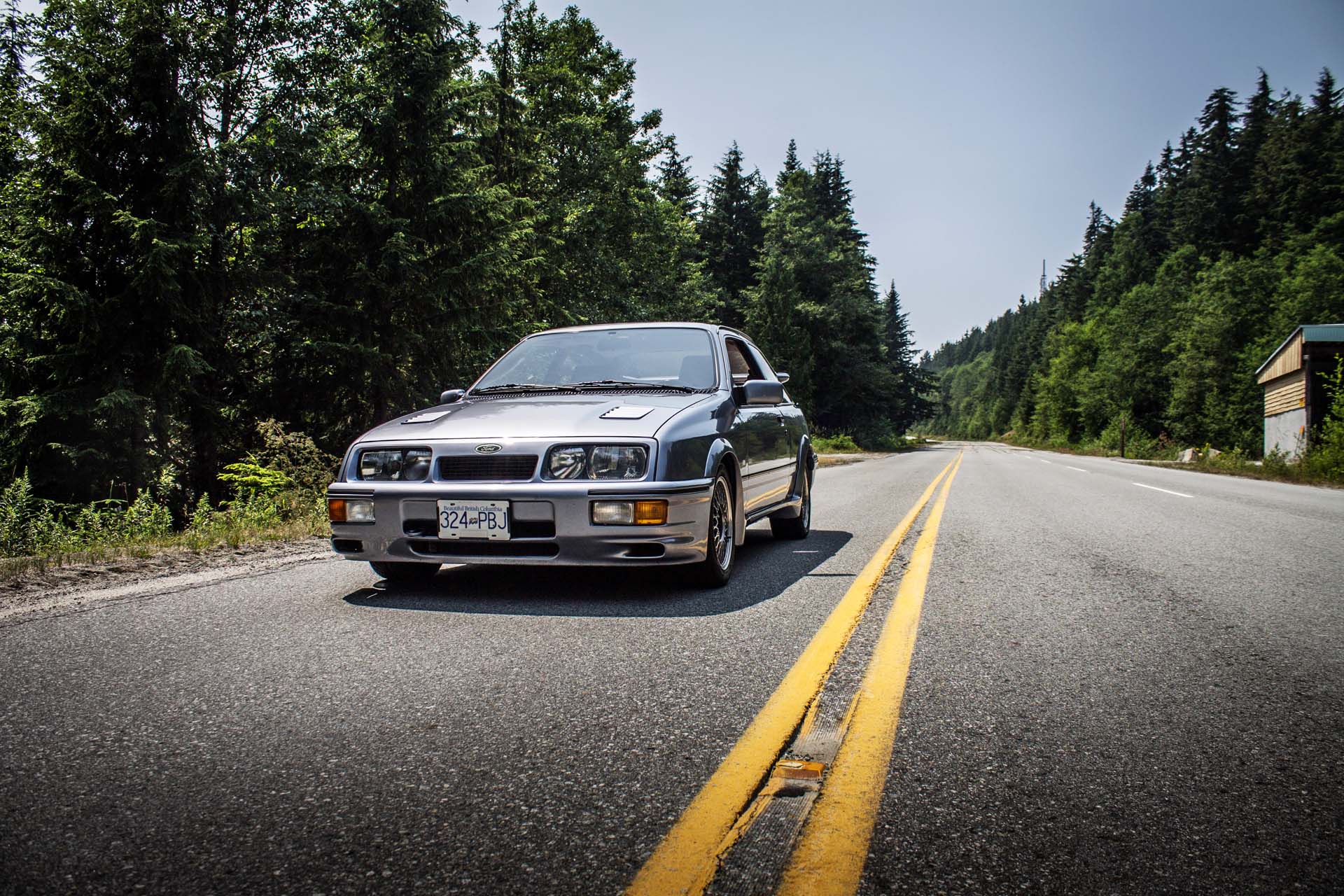 However, the XR4Ti could be bought with a 2.3L turbocharged four-cylinder engine and a stick shift, making it analogous to the contemporary Mustang SVO. With some modifications, the Merkurs could actually handle decently, and a small fanbase sprang up, buoyed by some mid-80s success in IMSA and British Saloon Car racing.

One such early fan was Craig Siemens, who bought an XR4Ti to replace a gnarly-but-impractical ’69 Mustang. He still owns one, but has since added two grey-market Sierra Cosworths to his fleet.

Cosworth. In the annals of speed, few other names carry as much heft. If you’re looking at F1-winning engine suppliers, for instance, Cosworth is the second name on the list after Ferrari. Founded by two former Lotus employees, the company has long been at the forefront of motorsport, and they were an obvious choice when Ford wanted to take their European-market Sierra into Group A touring car racing.

The rules said this car should never have existed. First, Ford’s initial order was for the minimum 5,000 engines required for homologation. However, after talking with their European performance dealers, it appeared dealers only thought they could sell about 1,500 cars. The car’s designer, Lothar Pinske, was absolutely insistent the car had to have a giant rear wing, a feature that dealers thought was far too extreme. Worse, Cosworth demanded the order be raised to 15,000 engines. 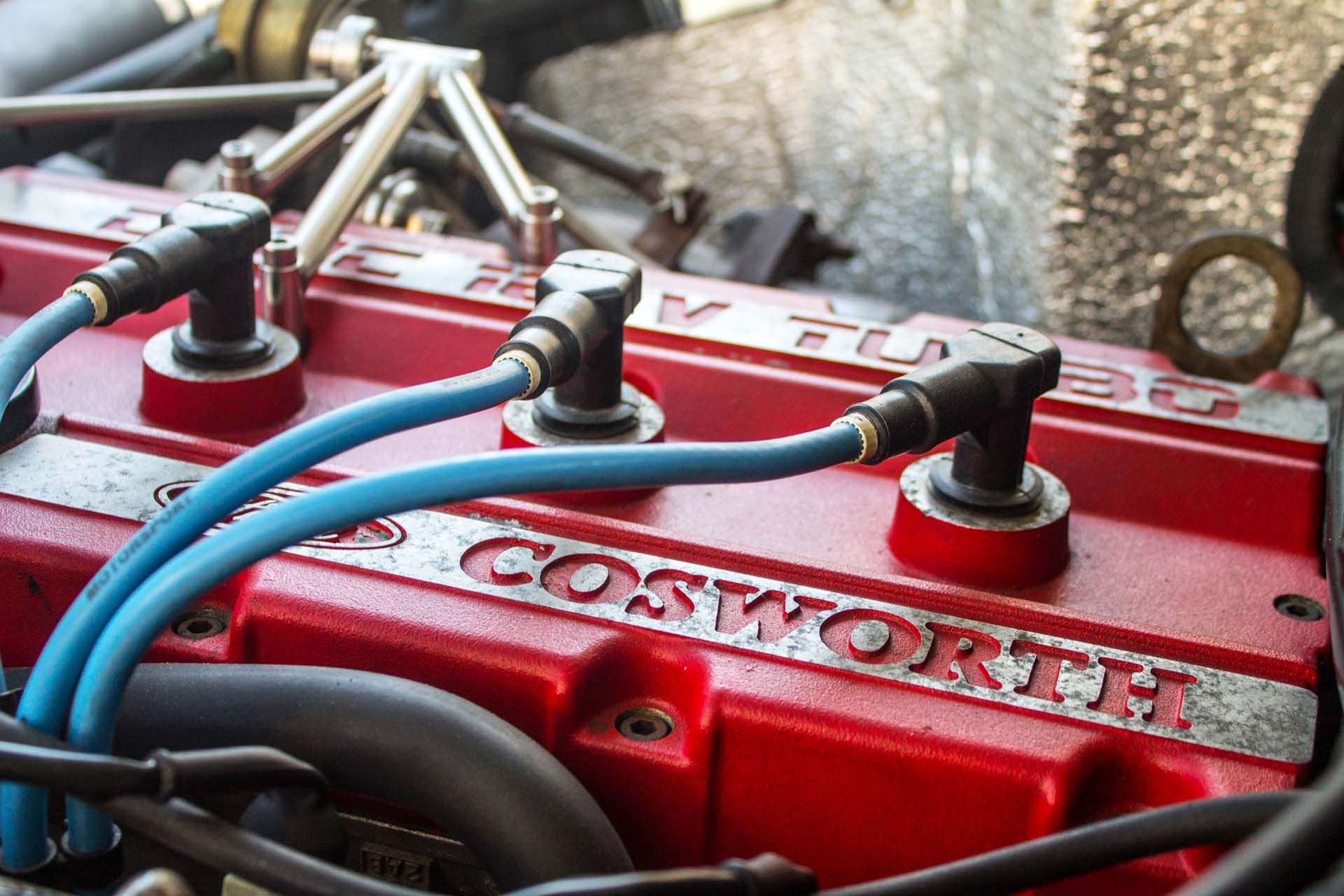 Even the company that produced the GT40 and the Shelby Mustangs needed to have a sensible business case, so the Sierra RS looked doomed. However, it found its champion in Walter Hayes, the English-born head of Ford’s UK public relations.

Hayes is one of those oft-overlooked champions who managed to work within a faceless corporation to create great things. For instance, while handling the aftermath of Ford’s failed bid to take over Ferrari, he managed to sign Jackie Stewart to Ford’s Formula One efforts. He also put together the business meetings that resulted in Colin Chapman’s Lotus racing team getting Ford V8s to power their wins, and the creation of the Lotus Cortina – the ancestor to both our fast Fords.

Even while the sales results forecasted doom and gloom, Hayes kept plugging away at his Sierra project, getting dealers into prototypes as soon as they were available. Once behind the wheel, enthusiasm suddenly bloomed. Further, Ford was able to trim the price point of the Sierra RS by cutting down on options and offering just three exterior colours. 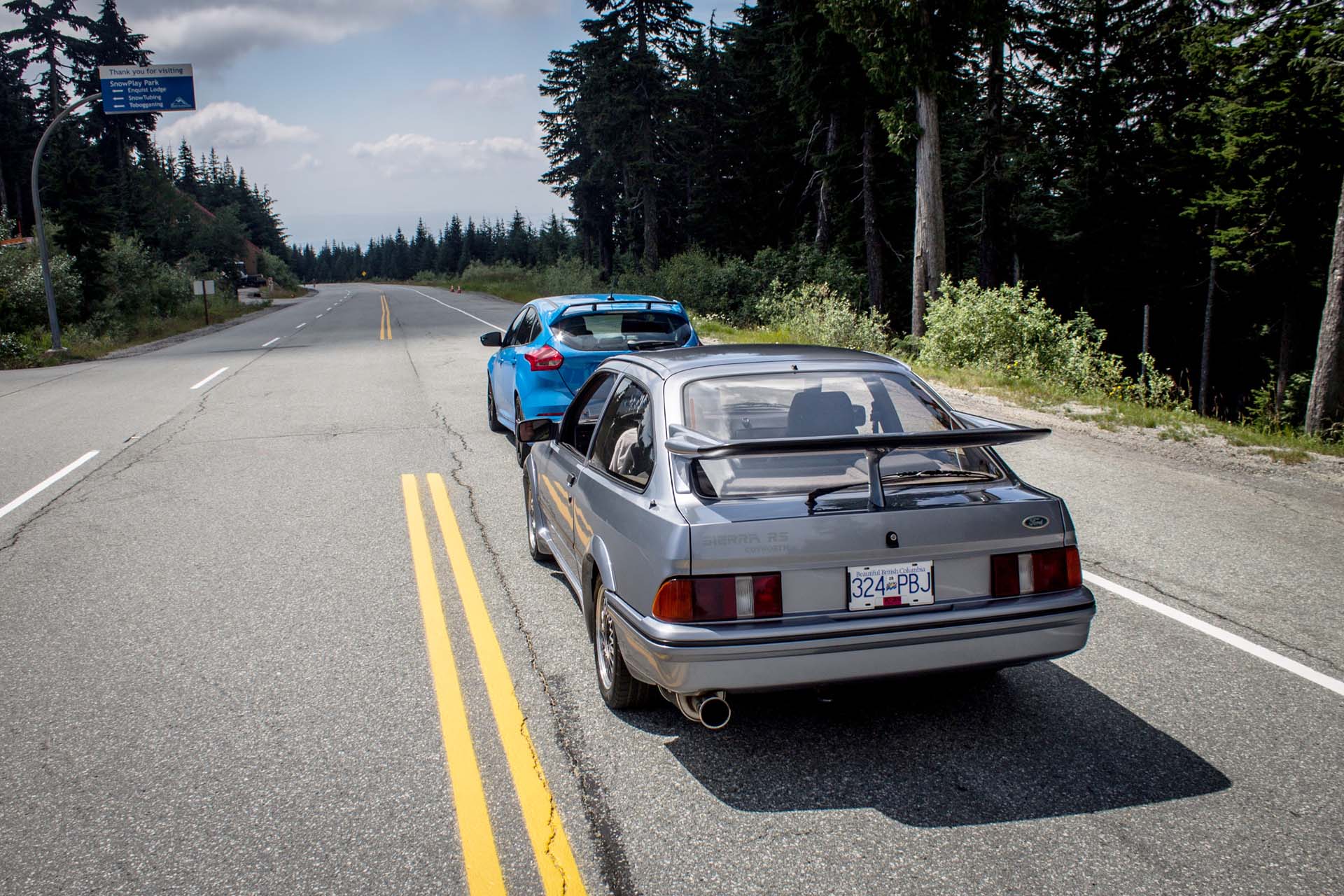 Presented in the spring of 1985, the RS Cosworth was launched the following summer, placing Siemens’ car in the first batch of the 5,000 homologation specials. Both right-hand-drive and left-hand-drive models were available; this is one of the latter, and was sourced originally out of Germany.

It’s in excellent shape, its Moonstone Blue paint gleaming in counterpoint to the newer Ford’s brasher hue. The interior is incredibly bright and airy, the result of 1980s crash-testing regulations; thin A-pillars mean you get a panoramic view out front, and your rear view is bisected by that massive snow-shovel of a spoiler.

The 2.0L turbocharged four-cylinder Cosworth came up with responds to modifications extremely well, but feels healthy here even in stock form. It makes a little over 200 hp, with torque to match, and puts the power down through a five-speed Borg-Warner transmission mated to a standard limited slip. 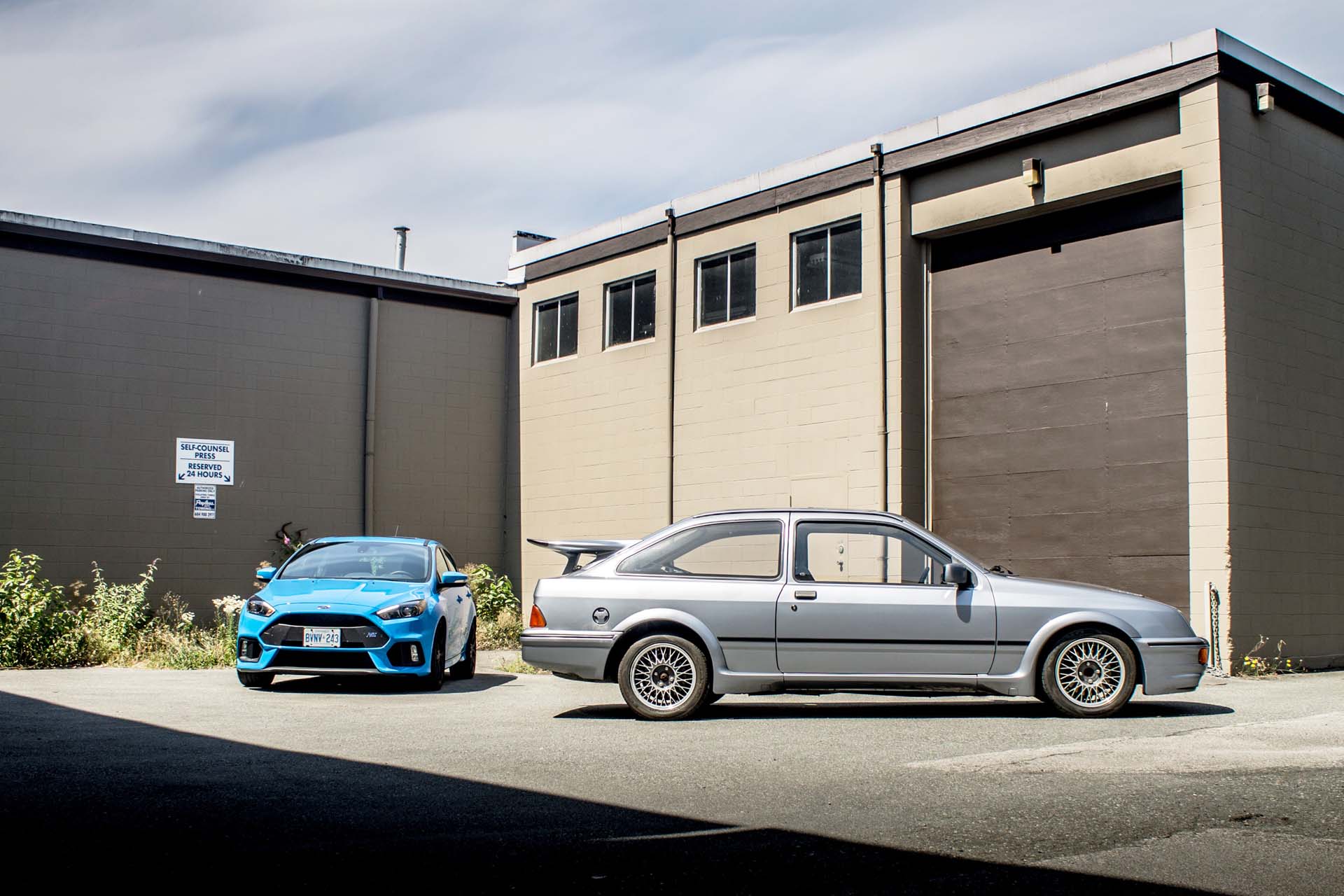 Far lighter than the XR4Ti, the Sierra RS feels nimble and eager, anxious to dive into corners and power out under boost. It’s almost like a turbocharged 1980s 3 Series, except lighter-feeling than the BMW. Steering feel is excellent, with a quick and responsive rack. Despite the age, Siemen’s Sierra feels remarkably fresh, and the way the Cossie four-pot honks into the high revs can’t help but put a grin on your face. It’s raw, vital, and eager: Ford’s answer to the M3.

Racing success for the Sierra took a year or so to sort out teething troubles, but the car was soon dominant. The most successful team was that of Australian Dick Johnson, who managed to get ridiculous power levels out of the 2.0L turbo. Towards the end of the Sierra’s career, Johnson was running qualifying engines making as much as 680 hp.

However, at least in Australian touring car racing, the competition was about to get far stiffer, thanks to the introduction of the Nissan GT-R and its all-wheel-drive trickery. The RS found itself outclassed, and while there would eventually be an all-wheel-drive version that had some limited success in rallying, it was nearly time to move on.

The Sierra’s replacement was the Escort RS Cosworth. Built around an updated version of the 2.0L Cosworth engine, this runty little box-flared beast looked a bit like the contemporary Ford Escort, but was mechanically more like a Sierra underneath. It had all-wheel drive with a rear-drive bias, and launched in the early nineties, at about the same time that the Subaru Impreza WRX and Mitsubishi Lancer EVO were about to begin their epic battle. 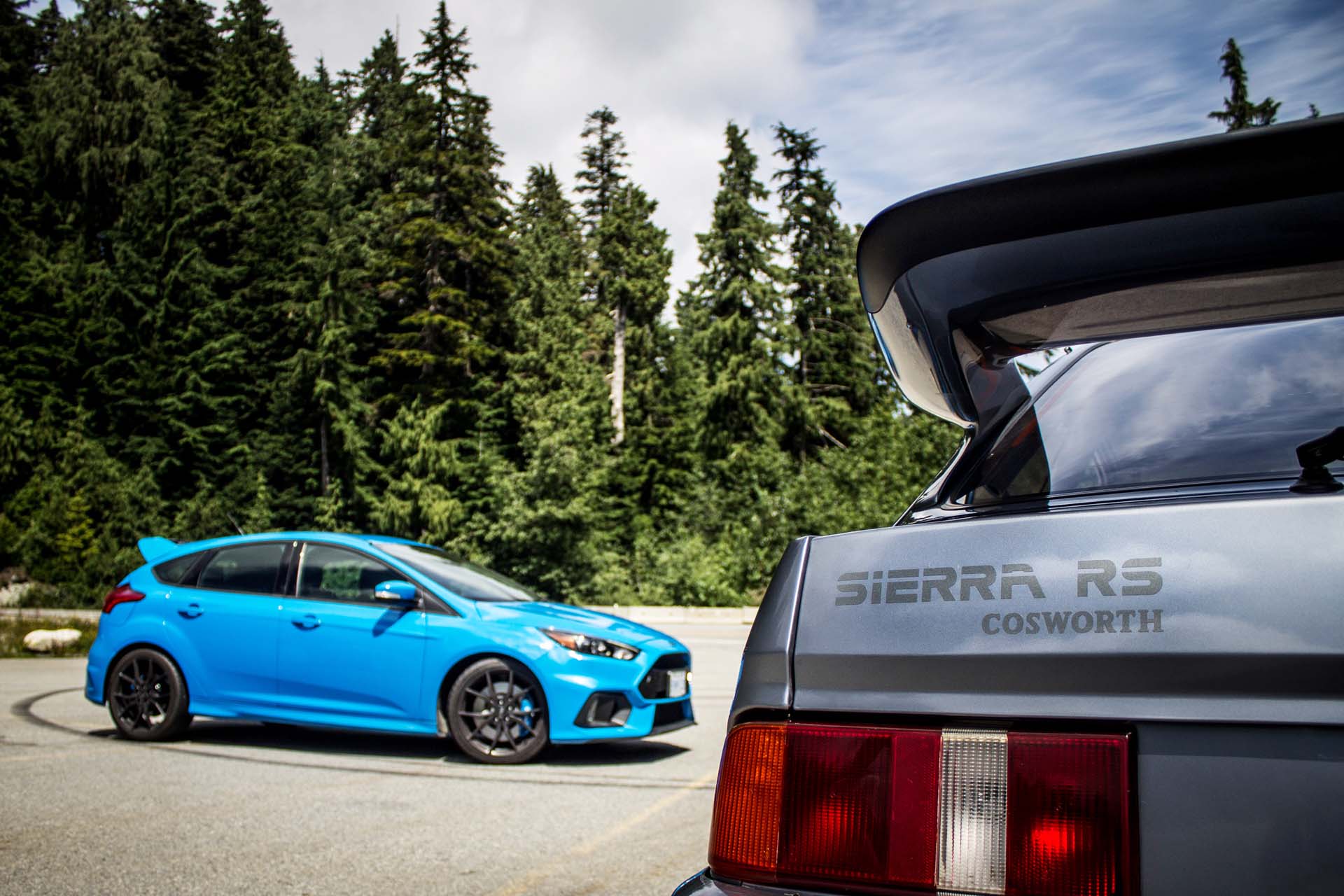 After the Cossie Escort, Fast Fords changed to front-wheel drive to fit in with their mainstream roots. The closest we got were the SVT models, and later the Focus ST – the RS brand remained forbidden fruit apart from grey-market imports.

But for some reason, perhaps hoping to buoy slow Focus sales by showing off a legacy of performance, Ford has seen fit to finally bestow us with the option to buy a proper RS-badged Ford in North America. It’s a little terrier of a thing, fitted with a clever all-wheel-drive system that’s capable of giving some rear-drive bias. Like the Sierra and the Escort Cosworth, it’s capable of hunting down some bigger nameplates at the track, while still retaining some practicality.

But more than that, the Focus RS feels pretty special. It feels like it too was shepherded along by people who wanted to build a car that broke away from the bean-counting realities of the modern car industry. Like its ancestor, it feels like we’ll come back to it, some thirty years hence, and remember that while being a rational adult is all well and good, sometimes you need to find a mountain road and drop the hammer a little.

Skip the vegetables. Drop a gear. Forget your troubles as the first corner comes up.