Just What is a Hybrid? (Of Music, Mélanges and Malibu’s Re-thinking.) Just What is a Hybrid? (Of Music, Mélanges and Malibu’s Re-thinking.)

May 4, 2016: It’s nearly midnight, I’m half drunk and touching – with my own fingers – the box holding the master recording that Gregg Allman made earlier this same week. Yes, that Gregg Allman and this week. Ten minutes earlier, I was recording in the same vocal booth he’d sung in three days prior. Five minutes later, I’m holding decades-old master recordings by Otis Redding, Wilson Picket, Clarence Carter – they were just lingering on another shelf.

Welcome to what may be the most fractured story you read this year. 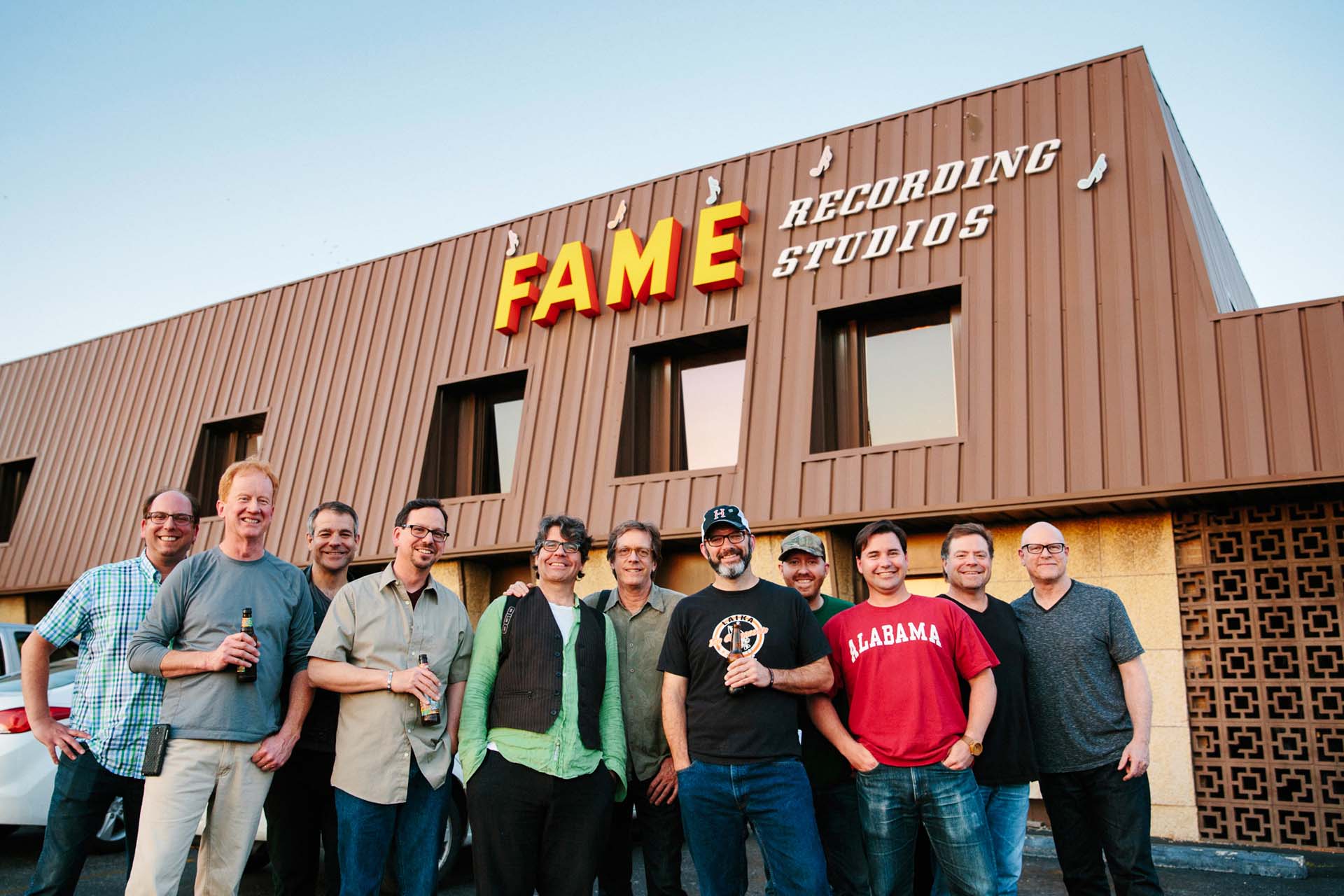 Imagine: GM USA invited eight automotive writers, all hobbyist amateur musicians of varying levels of talent and polish, on a magical mystery tour. We test drove the 2016 Chevrolet Malibu Hybrid down the Gold Record Road from Nashville to Muscle Shoals, Alabama, where we recorded in Fame Studios.

First, what’s the story angle and, second, what the heck?! It’s hard describe what a visit to Muscle Shoals means to a music enthusiast without resorting to cliché or expletives. Trackside at Le Mans? Mecca with alcohol? Heaven with electrified harps? Willy Wonka’s factory without the creepy child-murdering stuff? Bucket list doesn’t quite do it.

But first things first. American music, especially rock and roll, is by definition a hybrid: “a thing made by combining two different elements”. One of America’s greatest gifts to the world, after Chia Pets and Slinkies, rock and roll is the crossbreeding of traditional black and white musics: blues, gospel, country and bluegrass. We have a story angle! 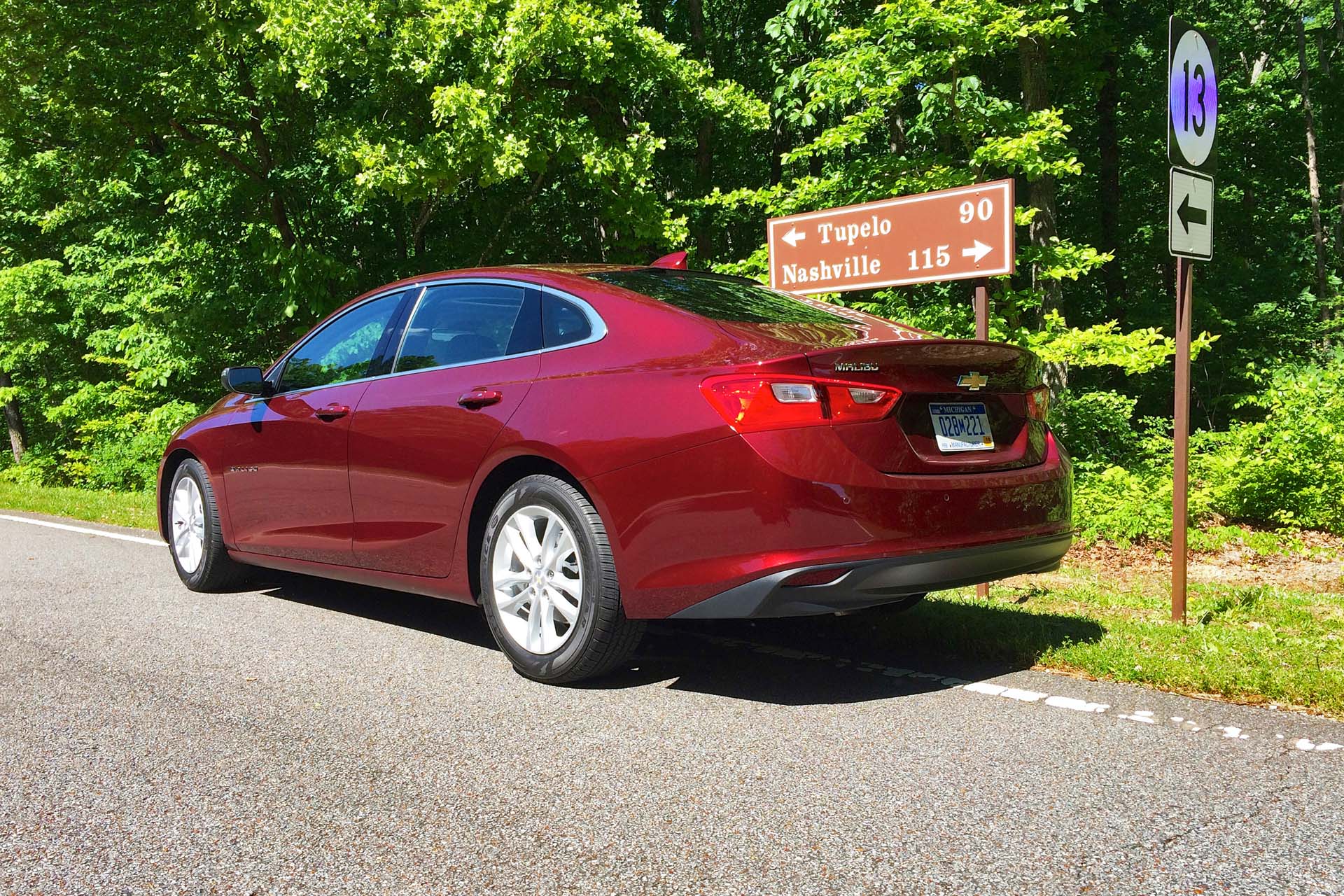 The new Malibu chassis features a Germanic sleekness and the hybrid’s powertrain borrows ideas and components from the new Volt. Each writer had their own to drive south from Nashville. This is territory where rock and roll was born of country and the blues. Elvis would’ve driven some of these roads. While this experience was a bucket-lister, much of the drive could not be called a once-in-a-lifetime thrill because I had just been here driving the Chevrolet Cruze, which looks like the Malibu’s kid brother, two weeks before.  I even took a few similarly posed photos.

The Malibu Hybrid is a comfortable and quiet ride. At speeds of up to 80 km/h it can remain in electric mode, partially courtesy of an all-new architecture for 2016. (Chevrolet’s completely rethought five brands this year alone!) The engineers managed to cut nearly 140 kg from the curb weight. So the fuel economy is an estimated 5.0 L/100 km for both city and highway.

The drivetrain’s quietness was great for listening to music with the sunroof open while blessed southern sunshine poured in. The MyLink radio system with 7-inch touchscreen, compatible with Android Auto and Apple CarPlay, is standard. Also standard is OnStar with 4G LTE connectivity and the ability to turn your car into a Wi-fi hotspot, as with the Cruze. Given all this tech, the Malibu could be a rolling office – or party room. (Parents, see the final paragraph.)

But if it had been too cold to open the sunroof? I could’ve experienced an interesting feature, uncommon for the price. This hybrid’s thermal recovery system captures heat that would typically leak out the exhaust pipe and repurposes it to warm the cabin. Brilliant. 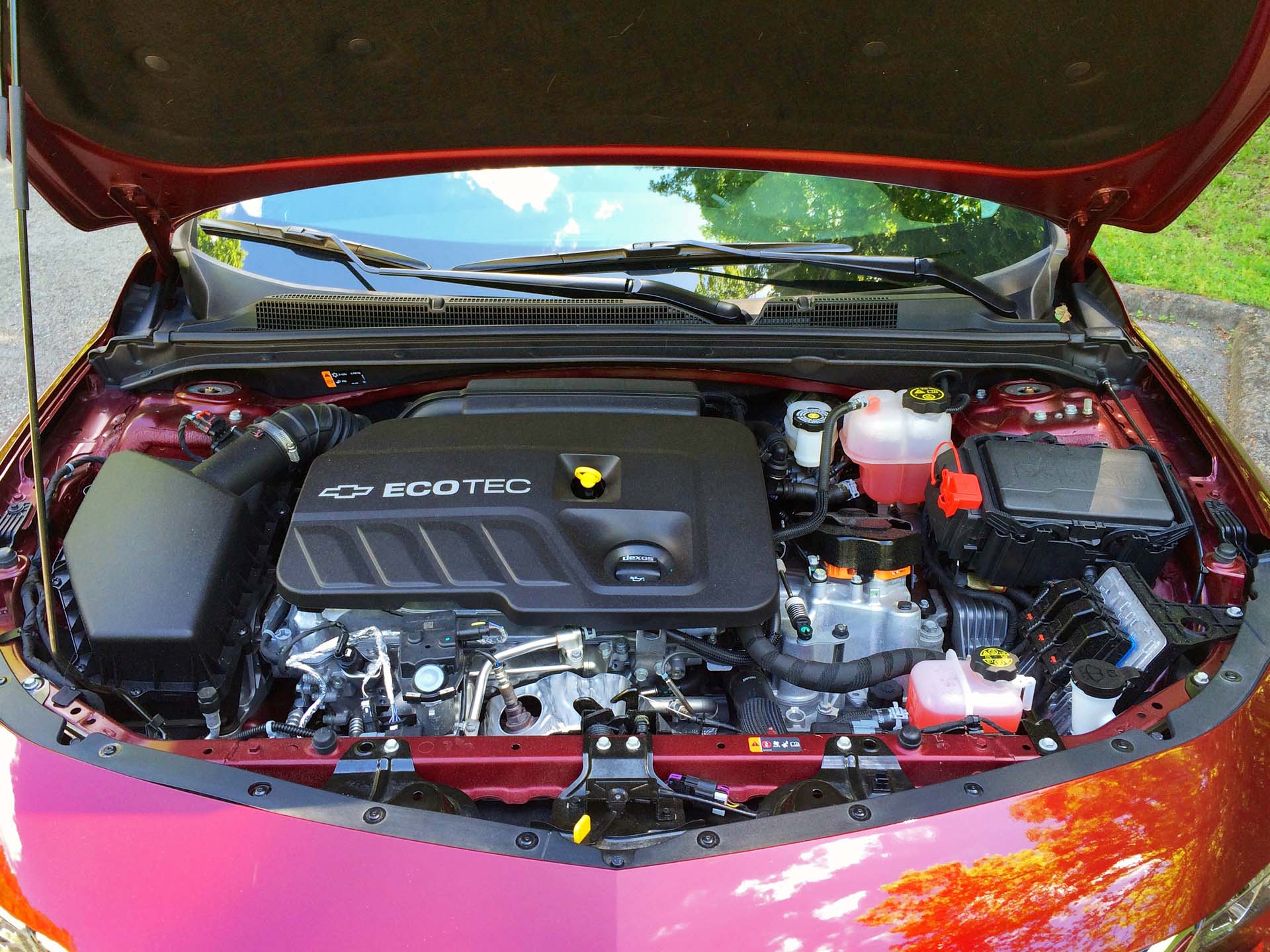 The Malibu Hybrid’s light, 80-cell, 1.5 kWh lithium-ion battery is housed and cooled in the trunk. In fact, the battery’s small enough that you can put the back seats down and make use of the extra space, a maximum of 328 L. Speaking of which, the wheelbase was extended by 10 cm. So there’s more room for passengers and a firmly gripping ride for the driver.

The transition between electric and gasoline-powered drives isn’t noticeable unless you’re looking for it. Driving the Alabama highway on my last miles into Muscle Shoals, the mind meanders like the Tennessee River. I start singing along to the radio, appropriately playing Lynyrd Skynyrd as though we had requested it for a soundtrack, “but I don’t feel like a hybrid, ’cuz this ’brid don’t barely chay-yay-yay-yange.”

Speaking of cross-breeding ideas, the Malibu Hybrid includes a regenerative braking system and regular, umm you know, brakes. You can maximize the efficiency of the former by getting to know the cruise control well at highway speeds. It also warms up your fingers for playing music at the end of a day’s driving. I slowly rolled into the hotel parking lot, breathless with anticipation and as giddy as a maiden on her wedding night.

Muscle Shoals doesn’t seem aware of its own value as a tourism draw yet. 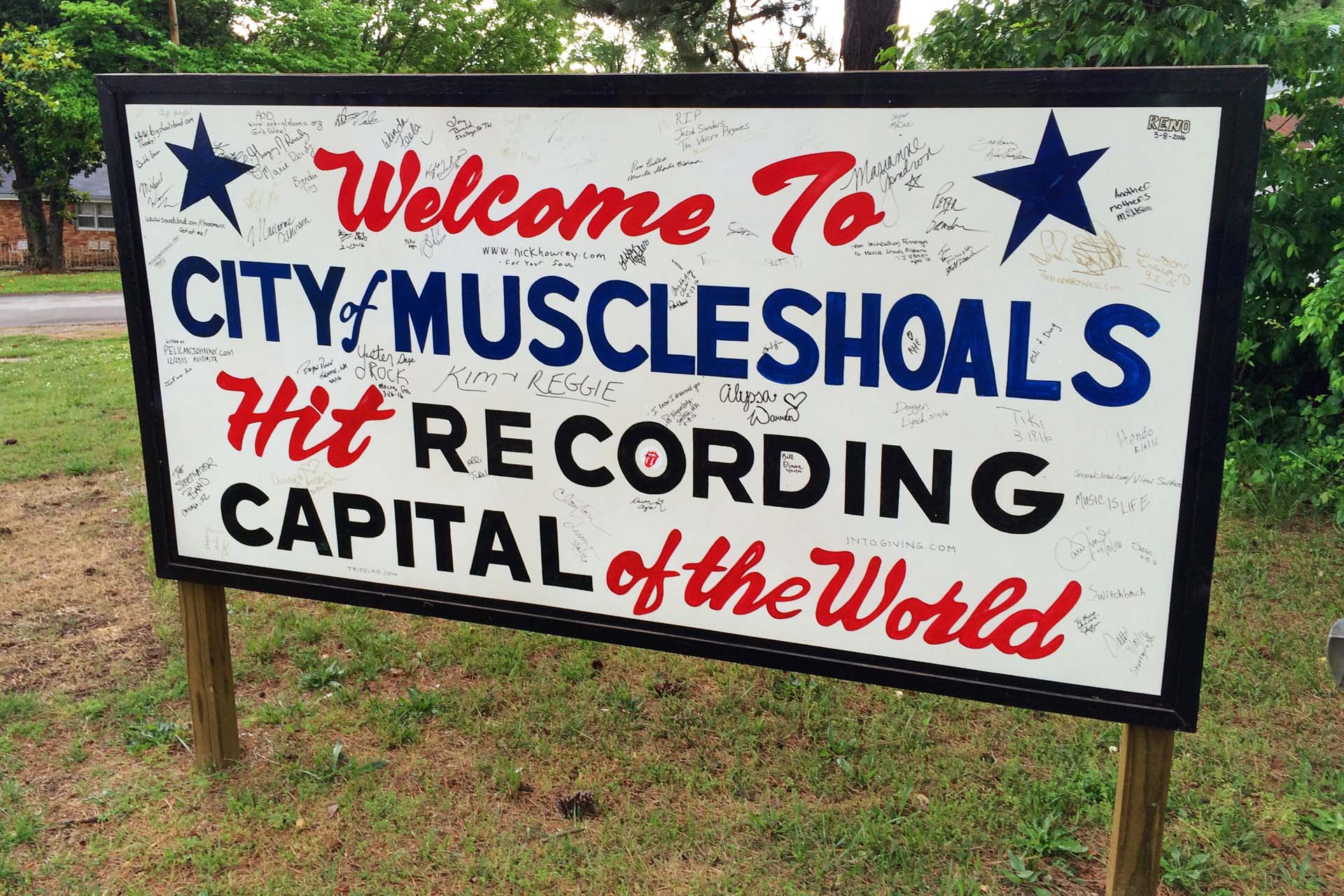 Two rival world-famous recording studios reside here, both utterly unassuming. Yet the music that’s come out of this town – the population is 9,000ish – rivals LA, New York and London.

Next, Fame Studios, Rick Hall’s musical Shangri-La, isn’t much more visually impressive. But then, they take us inside and introduce us to Hall’s son for a tour. Fame is decorated in a style best described as ’70s suburban-basement-cum-treehouse, but everywhere you look, you see legends.

Now we will. “Oh my, is that the piano Alicia Keys was playing in the doc?” The engineer confirms it. I swear the bench is still smoldering from Alicia’s perfect rump when I sit down to butcher a scale. It’s all too much. 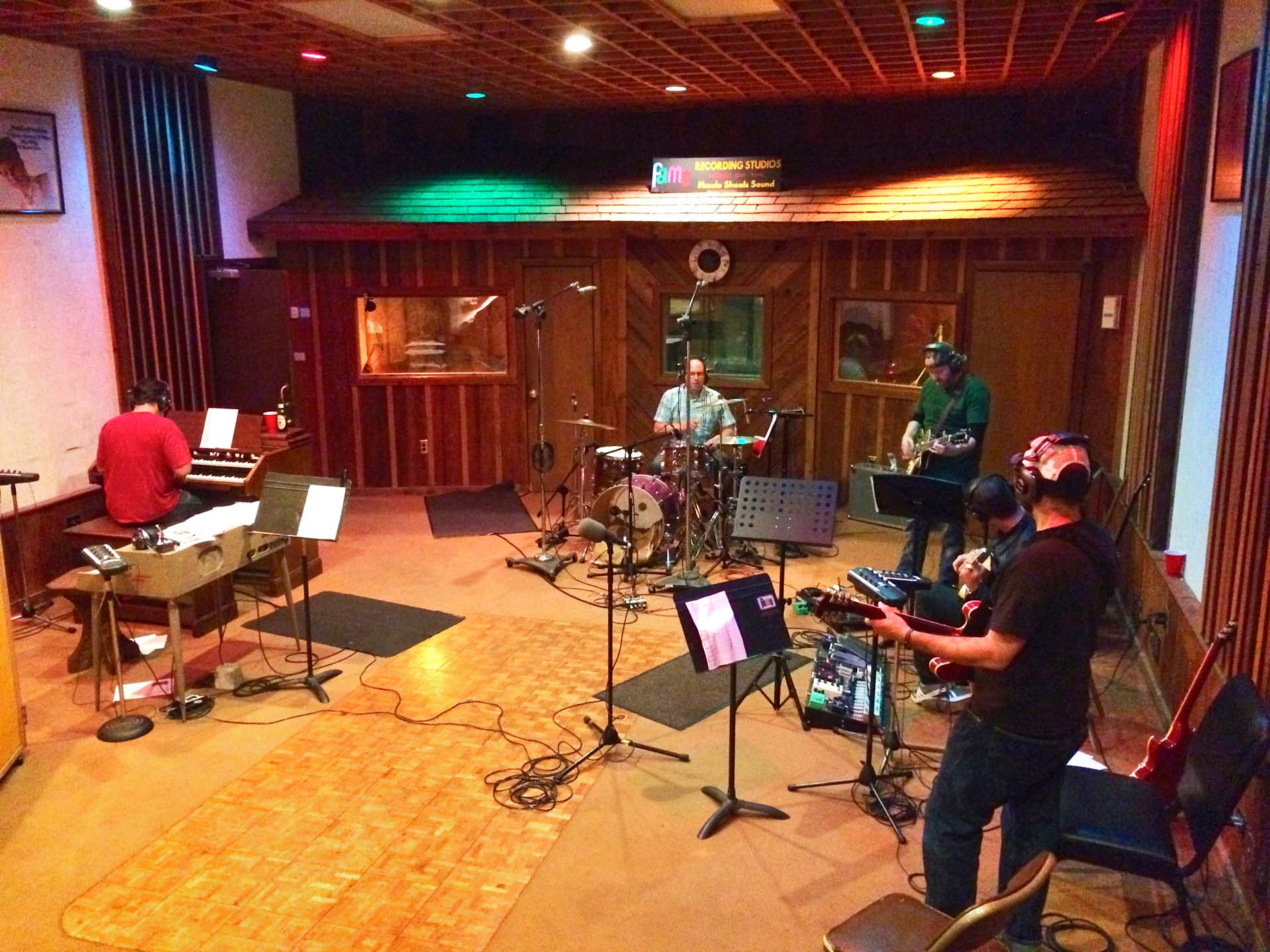 No one blames you for not trusting all you read on the Internet but, according to Wikipedia, Frank Rogers’s “work has resulted in 39 Number One songs, over 70 Top Twenty songs and multiple RIAA certified multi-platinum, platinum and gold records.” The night before, we had met him in Nashville over a private dinner and learned that we would not be leaving the room till we’d composed a new song together.

Somebody suggests an ode to a character who exists only on Facebook called Frank Bacon, an amalgam of all the worst traits you find in junketeering auto journalists. You can picture it. He brings an empty thermos into business class and leaves flights with it filled. He invents diet restrictions to drive publicists insane and so on. An a**hole.

We had a ball recording it and hacking our way through our respective buckets, but the final product wasn’t very good. Nearly four weeks later, GM has not released it. That’s OK. Be careful what you wish for and all that . . .

Teen Driver – maybe not so rock and roll after all. 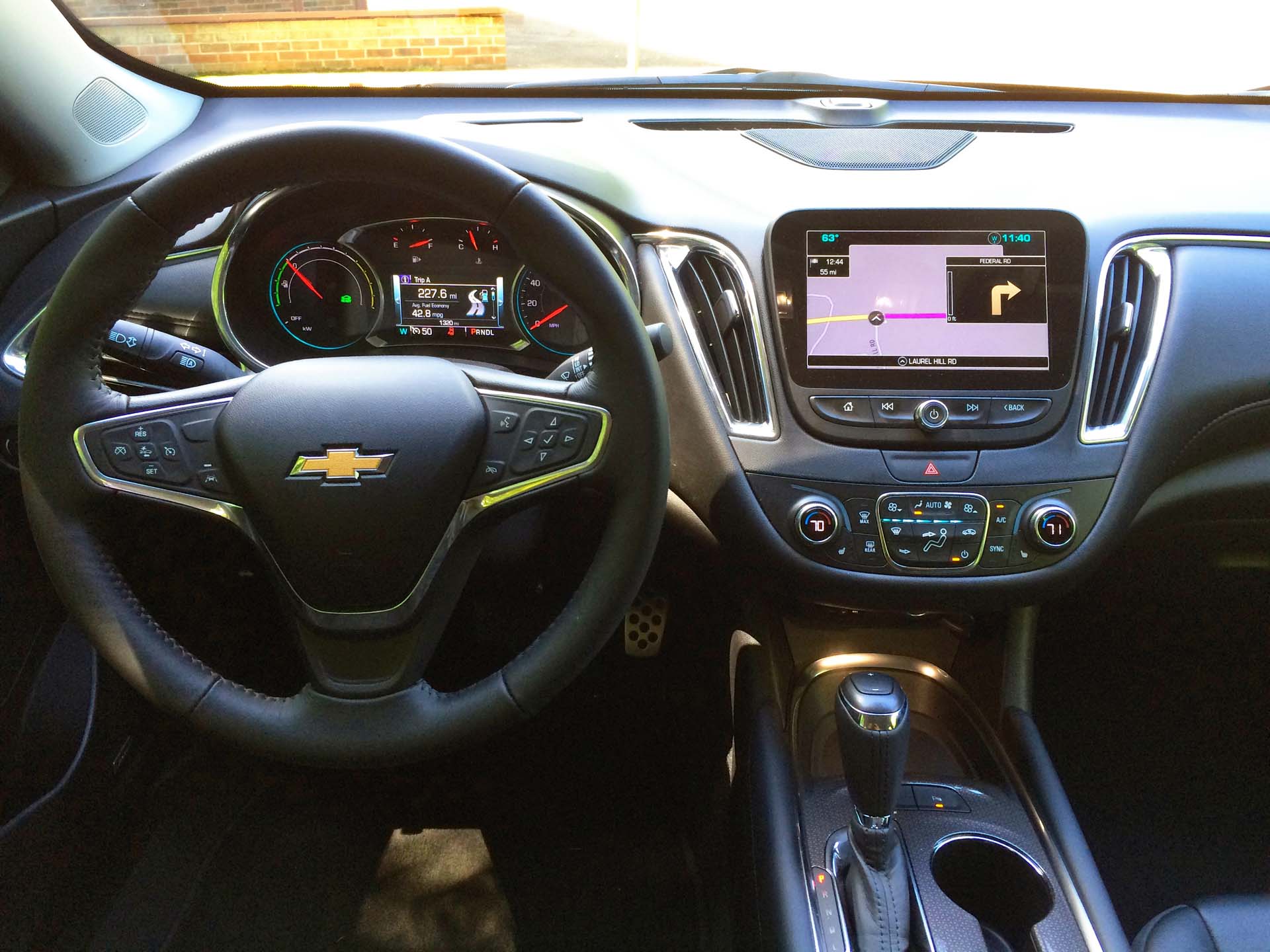 The modern teenager is the marketing world’s postwar construct: a hybrid of child and adult. They terrify us because they have an adult’s physical equipment in mint condition, just driven off the lot – and, especially with males, a child’s undeveloped computer between the ears.

One Malibu feature to make anyone with a sense of humour smile is Teen Driver, whose unique key for your son or daughter (let’s face it: son!) triggers a modified driving experience. Teen Driver mutes the radio until seat belts are done up. It issues an alert when your teen exceeds a civilized, preset speed and piles on the interventionist safety technologies.

Best of all, it sends parents a “Report Card” that no doubt provides many teachable moments for families. The parent of two young drivers in me doesn’t disapprove – he admires it – but when I was a kid this feature would’ve been called The Narc and about as un-rock-and-roll as you can get.