Canadians first fell in love with dynamic designers Colin McAllister and Justin Ryan – aka “Colin & Justin” – when their TV show, Colin & Justin’s Home Heist, debuted on HGTV Canada in 2008. Initially created for North America, the hit TV series has been broadcast around the world in more than 35 countries. Nowadays, the Scottish married couple – known for their scrappy, sassy wit and smart decorating style – appear on Colin & Justin’s Cabin Pressure, which airs on Cottage Life TV and on W Network’s Game of Homes, which premiers on April 12, 2016. But the decorating duo aren’t just passionate about design. They share another love: cars. Their prized possession, hidden in the underground garage of their posh Toronto penthouse, is a 1968 Mercedes-Benz 280SL Pagoda Roadster.

PG: What’s the appeal of a vintage Benz?

CM: “It’s such a design classic. It’s so beautiful. We can’t think of another car that is as beautiful. Kate Moss has one and she knows what she’s doing in terms of style.” 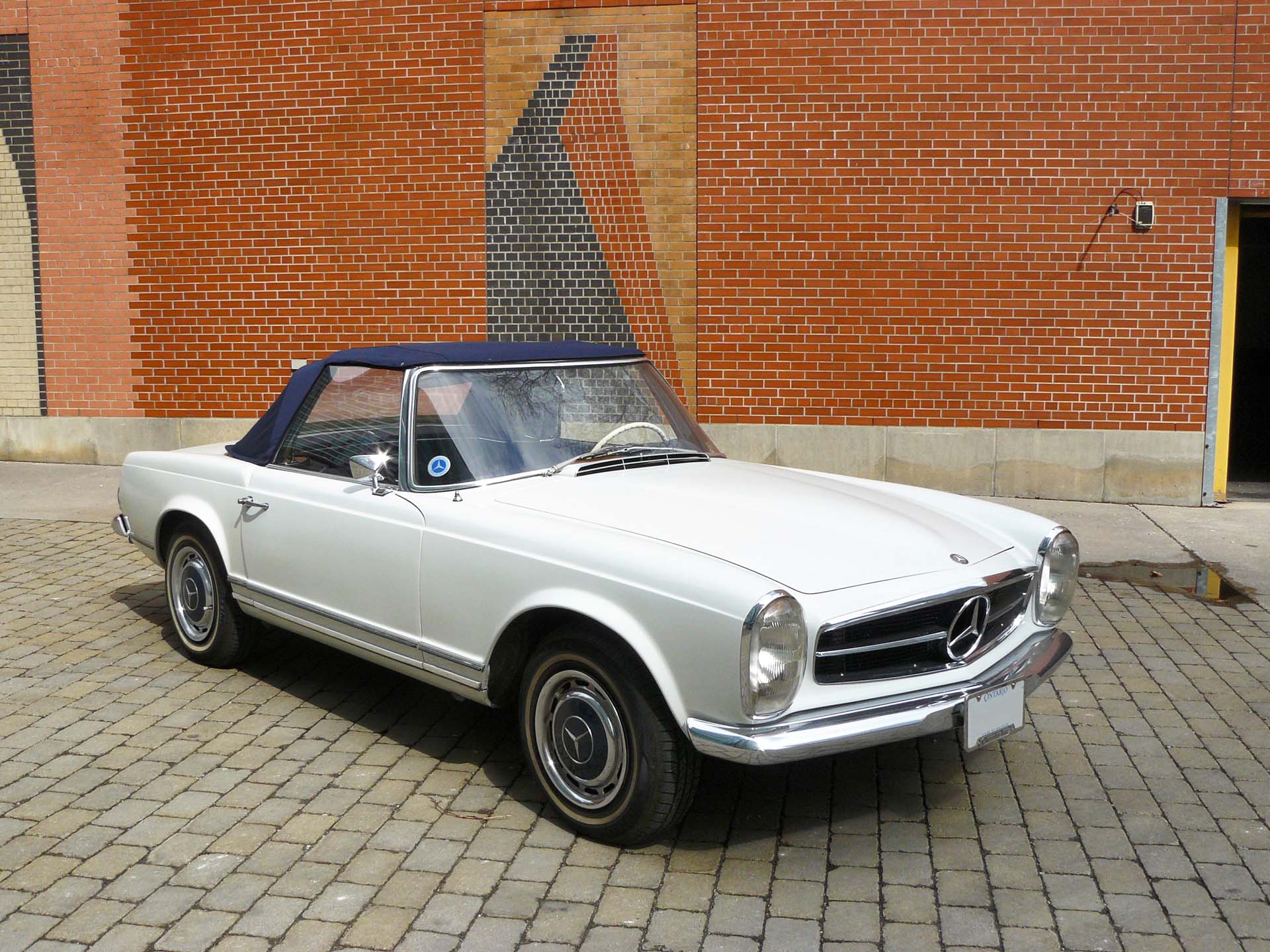 JR: “Our particular Mercedes is just gorgeous – it’s in really good condition. It has an immaculate paint job with no single scratch on it. It’s essentially the original paint. We’ve had a few touch ups here and there. Every time there is a stone chip they blow paint onto it rather than dabbing it on. It’s reliable. It’s sleek. It holds the road really well. Its 100 percent gorgeous from every single angle.”

CM: “It’s a delight to drive. And for a 1968 car it starts every single time. You just turn the key. It’s incredible. And it encourages Canadians to be more Canadian on the road because you guys are the sweetest people, so polite and nice unless you’re behind the wheel of a car. You love those horns and you will not let anyone in even if you’re a new Canadian from Scotland and you make a mistake, you’re in the wrong lane and the indicator is going. You just won’t do it. But that car – people let you in. People stop and have a look at it. When we’re driving in the Mercedes you get the old boys in the big F-150s, the young kids with their cars lowered and the big sound systems – they all pass and want to talk about this Mercedes. It makes them smile. People appreciate it is a total design classic.”

PG: Who takes the wheel?

JR: “When we’re driving I always say to Colin, this is my car! It’s actually our car – everything of his is mine and vice versa – there’s no divide. But I think somehow I have a bit more of a relationship to that car. I don’t know why.”

JR: “We try and split the times – one will drive one way and the other will drive the way back.”

CM: “It’s a joy to drive. We’ve taken it up to cottage country and it eats up a three-hour journey. It doesn’t bat an eyelid. It’s great on the roads as we get up there and then suddenly we’re on dirt tracks and we have to drive two miles an hour to avoid getting any stone chips!” 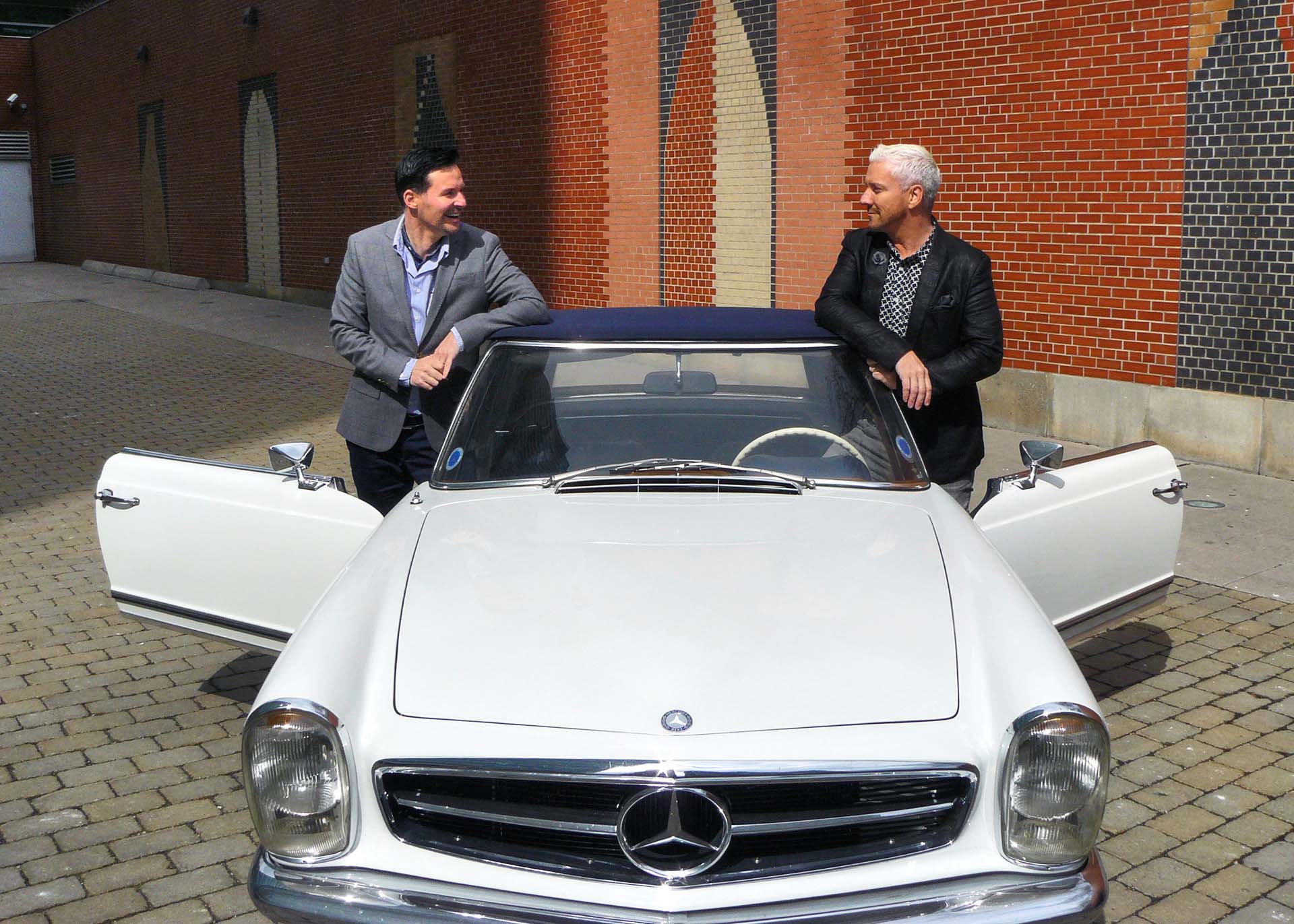 PG: Who has the better driving record?

CM: “I’m afraid so. I’m good now. I got eight points for speeding, which I’m not proud of. So now I drive like a grandmother – not a funky, go-fast grandmother, a proper one.”

JR: “I don’t have any points at all. I did in Britain when I was a kid for speeding. But my license is pretty much flawless. Our insurance premium is always weighted by Colin’s eight points.”

CM: “Mine was a 1987 Fiat Panda and it was really boxy, square cut. I put spoked alloys on it so it was a racing beast. It cost me £395 and it didn’t have any adjustable wing mirrors [side-view mirrors] so I went to the scrap yard with a screw driver set and I took a set of adjustable wing mirrors off another Fiat Panda and put it on my own, which I was really proud of. It was a bit of a rust bucket, but ergonomically everything was where it should be. I really enjoyed that car.”

JR: “My first car was a Citroën Dyane, which was a derivative of the Citroën 2CV. I bought it by accident. We used to go to the car market [auction] in Glasgow and I’d look at all these wonderful cars. One Sunday, we said to our friend, Alison, you should come down and pick up a cute mechanic. She was single. Alison had a habit of dressing up in fancy dress or going in disguise – she’d go as a different person at every event. Alison was nowhere to be seen and then out of the corner of my eye I saw Marilyn Monroe – Alison had come in the big blond wig, the white dress, and the red lips. I waved over to her and then I heard a man go ‘Sold!’ I bought it on the spot for £75!”

“So, we get in the car to drive out. I turn onto the road and about ten seconds later I was stopped for no tax, no insurance, and no MOT [annual emission test in the UK]. I was 20-21 and I got an IN10, which is a penalty for another couple of hundred pounds and seven points on my license. So that £75 car cost me several hundred pounds straight away in fines and it screwed my insurance record for four years. So, it probably cost me a couple of thousand pounds.” 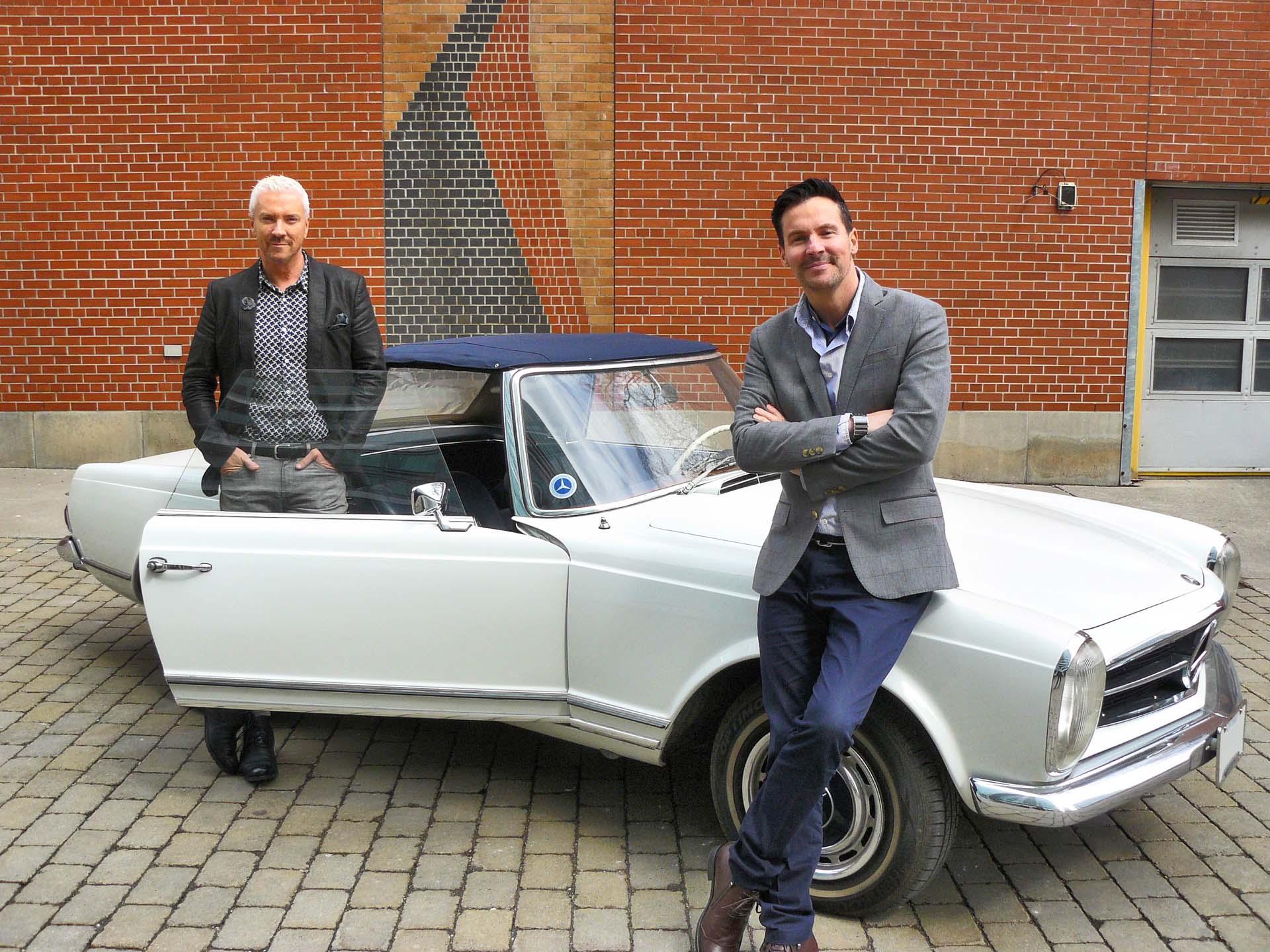 CM: “There’s no such thing as a bargain Citroën!”

“Justin also had a ’76 Mini Clubman and it didn’t have a starter motor. We’d be driving around, ‘Please don’t stall. Please don’t stall.’ We’d be sitting in traffic in the city of Glasgow and suddenly the car would stall and I would have to get out and push that damn thing until it started again!”

JR: “In those days, it was hundreds of pounds for a starter motor. We couldn’t afford it. It was a lot of money – beyond our means. The only way to get it to start was to bump start it, jump start it, or roll it down a hill.”

CM: “We like our cars. In my perfect existence, I’d have a huge country house with a massive multiple garage and somebody who could tinker around with them and keep them clean. And when I wanted an extra glass of wine in the village come and pick me up! I would like to have a chauffeur and mechanic.”

JR: “I am desperate for a Citroën 2CV. I love Citroën 2CVs more than I love anything else. We’ve had 3-4 in Britain and we paid no more than £100 each for them. Up until 20 years ago, you could buy them second-hand in Britain for £500. Something happened about three years ago and people started to love them and now they’re £10,000! I would love one,” he says, searching on the autoTRADER UK website as we speak.

CM: “Justin adores those cars – he’s like a fanatic. We were having dinner at Le Sélect on Wellington [in Toronto] and suddenly all these cars tootled up and parked in the car park next to it. They were having a little owner’s group drive and this one [pointing to Justin] was there being photographed on the bonnet like Ms. Motor Show!”

Notable achievements:
• launched their career as designers and co-hosts on British TV with their hit BBC series Trading Up in 2003; they hosted about 200 episodes over seven seasons
• their first North American series Colin & Justin’s Home Heist premiered on HGTV Canada in 2008 and is now seen around the world in Spain, France, Germany, Australia, Hungary, South Africa, Dubai and New Zealand
• wrote three books including Colin and Justin’s How Not To Decorate, Colin & Justin’s Home Heist Style Guide and their first, The Million Pound Property Experiment, which won the Lifestyle category at WH Smith’s People’s Choice Book Awards in the UK
• their line of home décor items include sofas, chairs, bedding, and lamps, which are available at HomeSense, Winners, and Marshalls in Canada and TJ Maxx and Home Goods in the US
• resident design experts on Cityline and annual TIFF reporters for City TV; they’ve interviewed Hollywood’s hottest celebs including Madonna, George Clooney, Hugh Jackman, and Jennifer Lawrence
• regular appearances on ET Canada and City TV’s Breakfast Television
• ongoing guest appearances at various North American and UK home shows and exhibitions Celebrity Car Watch: The Stars of the NBA