Public auctions are usually a sea of bad decisions waiting to find a home in a new idiot’s garage or driveway. At one particular auction over the summer, I was the idiot, and my bad decision lay in wait with bated breath in the lot of automotive shame.

This wasn’t my first rodeo; I had been to the auction before. But, this time, I had plastic with a metallic stripe in my pocket, getting slightly warm and begging for release from its leather-bound sarcophagus.

As always, my partner in automotive crime and I scouted the lot prior to the auction, eschewing possibilities within my budget for interesting German and British metal to fuel grandiose gearhead dreams. If we had been paying more attention, a particular Ford Focus would have been written off the purchase option list due to its general state of disrepair. But, we didn’t, instead focusing on a Jaguar XJ that would look perfectly placed in any retired dentist grandfather’s driveway.

After our pre-auction “inspection” of available autos, we made our way to the auction lanes, seeing a couple of familiar faces from the previous month. We talked about their purchase – a gold (in colour, not condition) Chevy Aveo – they were able to flip for a profit at a family towing business.

This gave me the gumption I needed to decide to buy that day. Hell, if someone can flip a Korean hatchback lacking A/C and automatic transmission, I’m sure I could pick something up and do the same.

Volume import and domestic examples were driven through the lanes, nothing going for less than a couple grand, and my patience began to wear thin. That’s when I saw the biggest automotive mistake I’ve ever made. 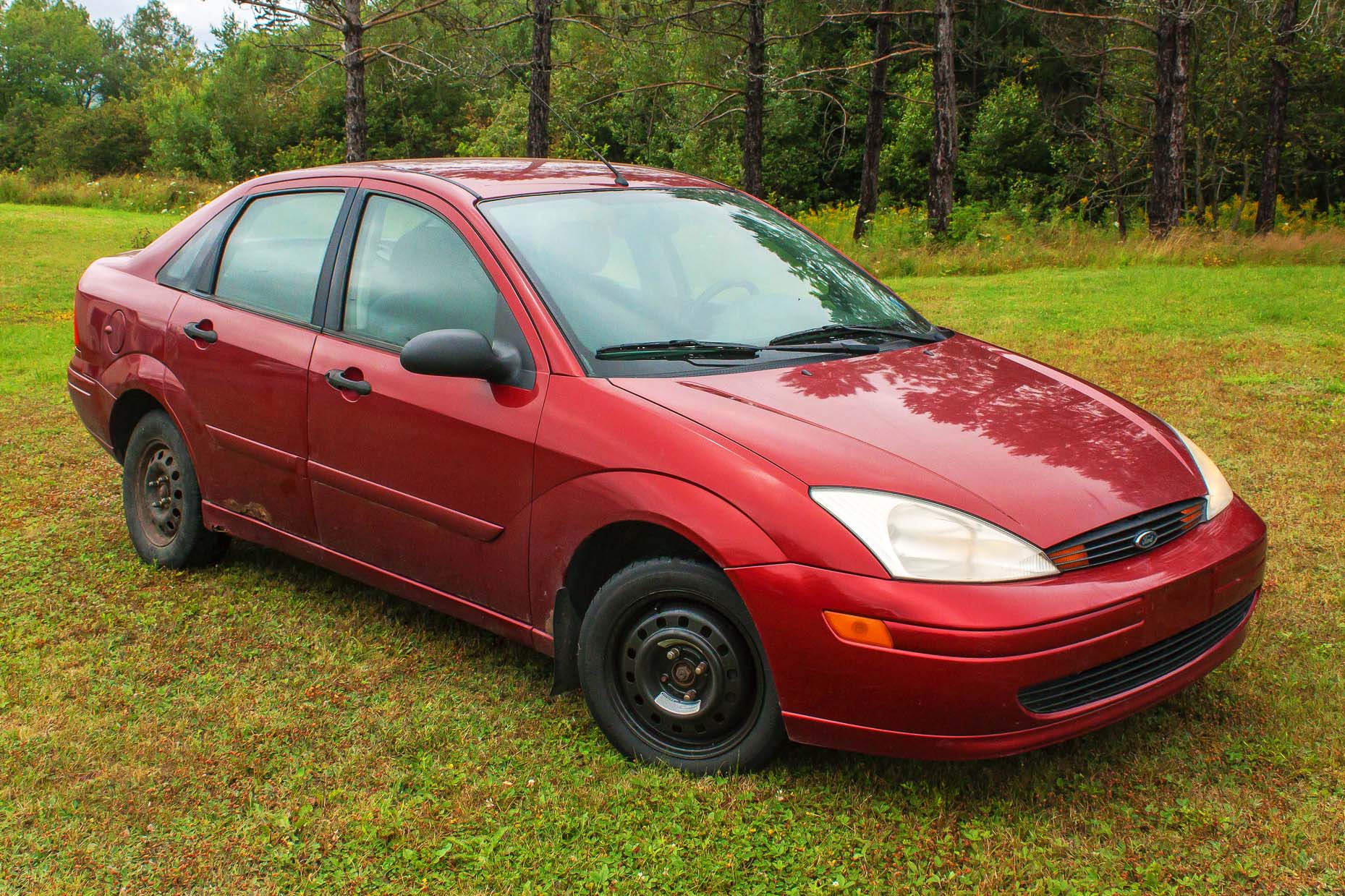 It, a 2000 Ford Focus in wine red, had made its way to the block before I could see it drive past.

Silence. Nobody moved, frozen in the fear a slight twitch may be inferred as a bid.

Again, nothing. The only noise came from the neighbouring lane and people shaking their heads in disgust at the auction example in front of them.

And up went my number holding hand, faster than a shot of adrenaline. 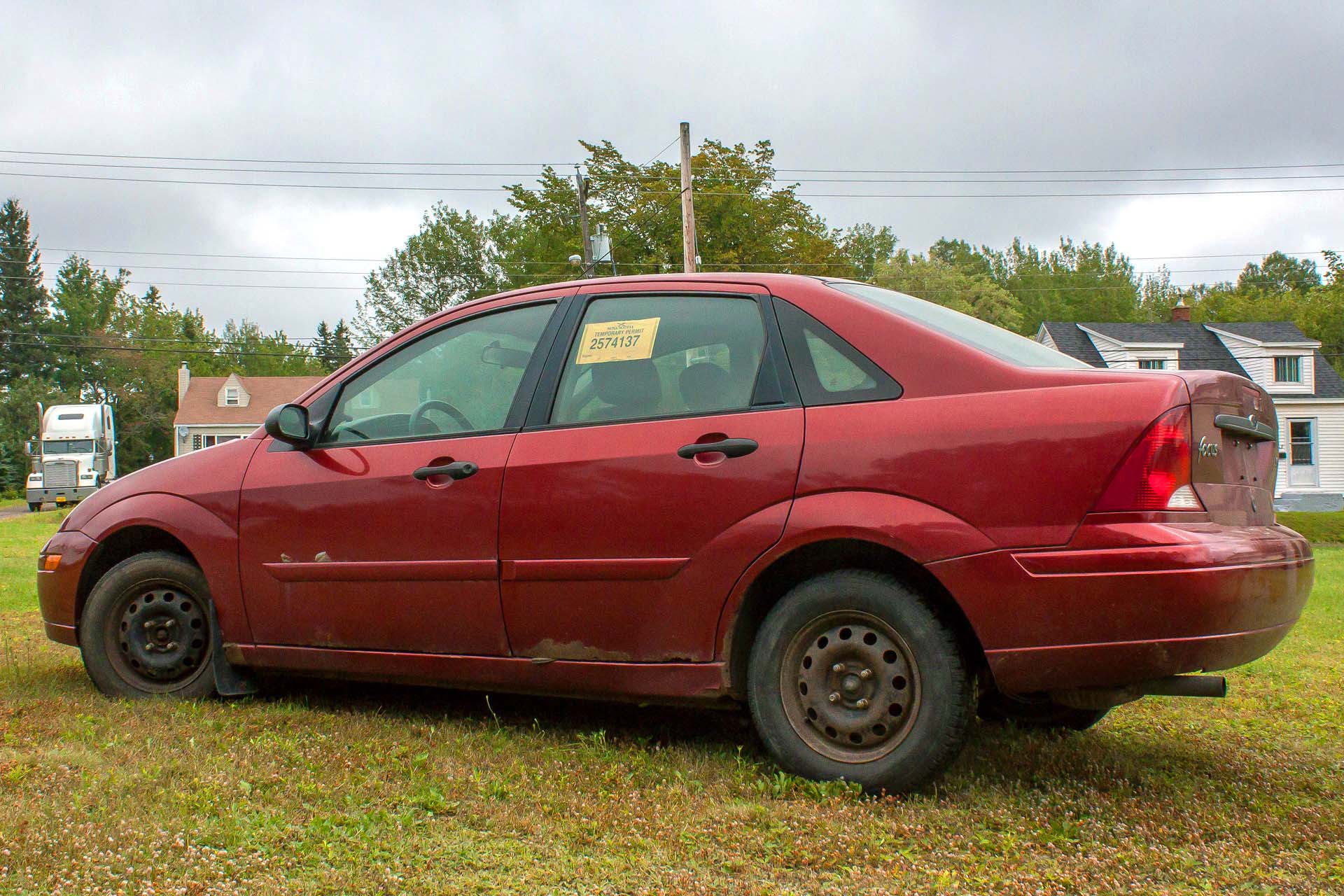 He could have finished it off with ‘to that idiot in the black coat’. Thankfully, he didn’t want to bruise my ego too much.

Immediately after the sale, we returned to the lot to give my most recent purchase more than just a cursory glance.

One tire was almost flat. No worry, it still has the spare in the trunk. However, the wheel was missing a lugnut, and upon closer inspection, a good section of stud. After looking at the other wheels, the right rear had a massive amount of camber, the result of a rusted out rear subframe, not to mention the numerous fist-sized tin wormholes in the bodywork.

My hopes were still high that, between my friend, cousin, and myself, we could put it back together and price it to make a profit.

Weeks went by as we searched for cheap parts, the Focus making a permanent home in my garage, not being touched for days at a time. The more we tried to justify refurbishment, being thwarted by the junkyard gods, the more I realized this would be one of my biggest screw ups to date.

That is, until, an idea hit me like a 20-year-old Crown Vic.

“Are you doing the derby this year?” I asked my compatriot.

“No, I’m skipping it this year. Why?” he inquired in return. I stared at the car and he clued in immediately.

Over the next two weeks, and a total of maybe 10 man-hours of actual labour, the Focus was stripped of glass, front passenger seat, rear seat bottom, exterior lighting, airbags, and other unnecessary items. As I pored over the rules (which, at this derby, are more suggestive than enforced), other modifications were made. The gas tank was relocated to the back seat, holes cut into the hood and trunk lid, battery relocated to where the front passenger seat used to be (sitting in a strapped-down milk crate, an excellent piece of redneck ingenuity), and we reused the rear seat foam to create a driver “safety cell”. We even cannibalized my friend’s Focus Wagon of its donut tire so we could run two skinnies on the rear.

No roll cage. No reinforcement (save the addition of a driver door plate). No mechanical alterations. The only aftermarket work completed was our incredibly stellar “shark mouth” paint job and engine-size badging.

At long last, derby day had arrived, one of the main attractions at the Nova Scotia Provincial Exhibition. Over three days, different classes of vehicles compete in the pit of death. The class I was contesting consisted of four-bangers and smaller six-cylinder cars.

A local scrapyard happily donated a driver and tow truck for the purpose of delivering the car to the grounds. In return, they’d get the car for scrap at a reduced value. Win-win for all involved. 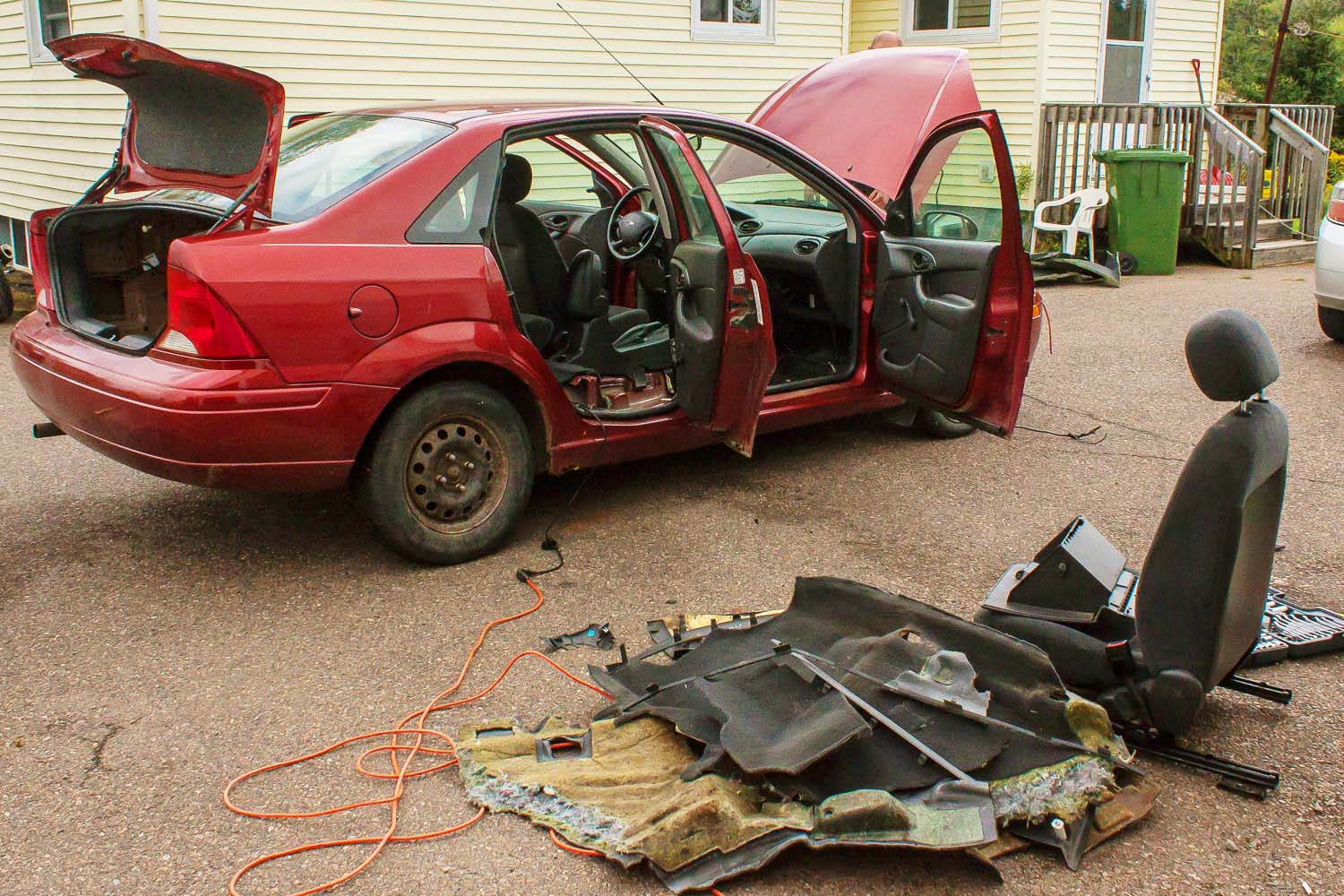 As we arrived at the horse raceway playing host to the week’s automotive carnage, it became apparent I was under-prepared for what lay ahead. Many of the cars fielded had professional sponsors, more structurally rigid driver protection, and crews of volunteers helping each entrant. My neighbour in the pits was a veteran of derbies all around the province, this not being his first of the year nor the last either.

“Don’t worry. It’s a crap shoot. Protect your nose and you should be fine. Who knows, you might be the only one running at the end of the day,” he said to me in an almost fatherly exchange.

After our friendly chat about strategy, drivers were called to line up their vehicles for introductions. It was then I realized my trunk lid, for some reason, would not stay latched on its own. Maybe the old girl had gotten scared, knowing what was to come next.

In typical Newfoundlander fashion, and after I exhausted brute force to remedy the situation, my friend said he would fetch some chain to secure the floppy body panel. He returned with some of the weakest looking, overstressed rope you could ever imagine.

“I thought you were bringing chain,” I stated in a frenzy as we were about to be called down to the pit of death.

To which he cheekily replied, “This, b’y, is Newfoundland chain.”

I was not about to argue. If anything, that little joke gave me a slight calmness as we furiously tied down the rear of the car before arriving last to the pit of death.

After this point, I really can’t clearly recall what happened. 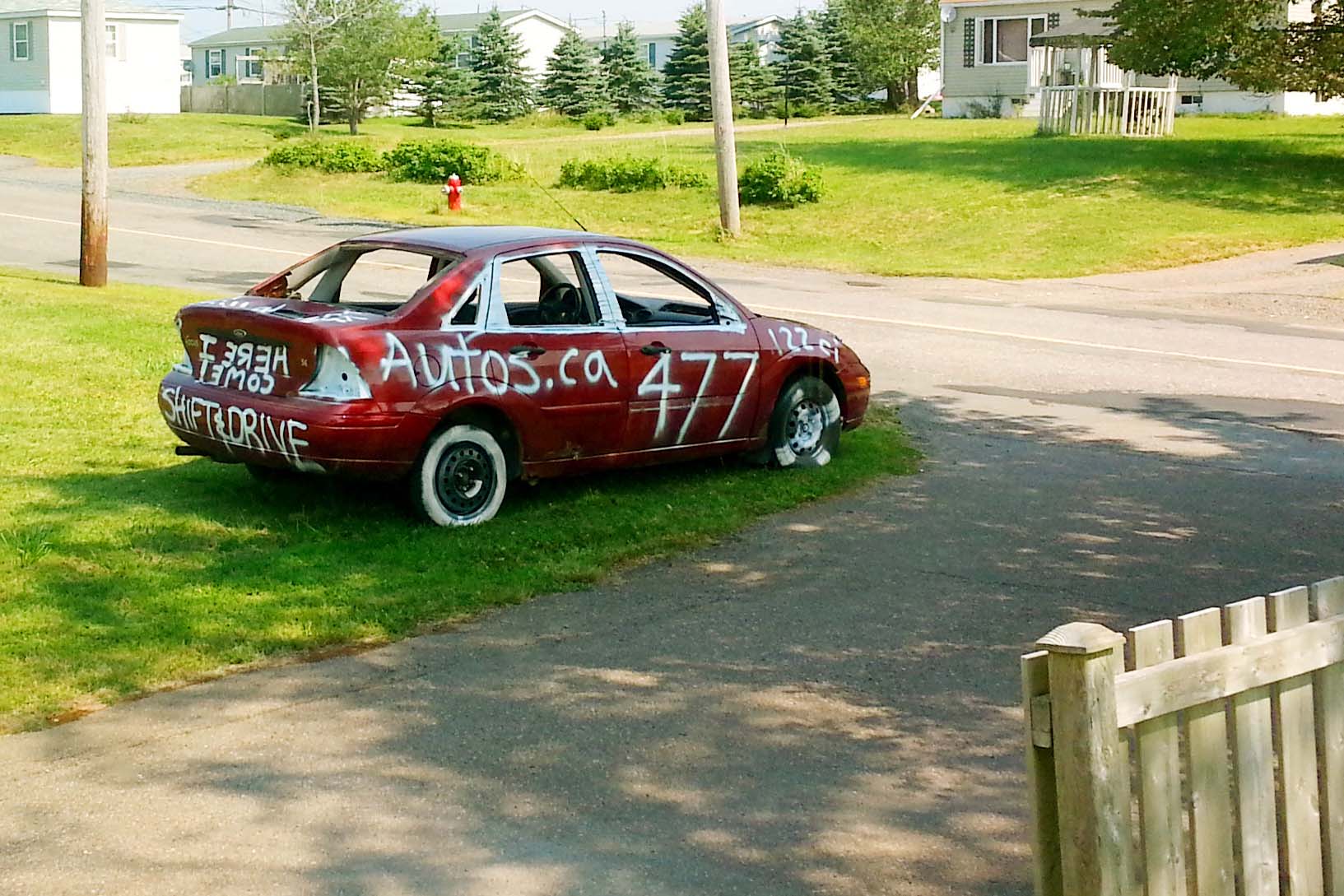 As I sat in the car, transmission in reverse with my rear lined up to give someone a shunt, my hands grasped the wheel as if it were my only lifeline. One of the firetrucks on scene, in case of emergency, blew its horn to mark the beginning of petrol-filled carnage.

I floored it, paying no attention to the lack of grip on slippery grass and mud, hitting the first car almost square on. I immediately learned looking over your shoulder as you hit another car while doing 35 km/h in reverse is not smart and, in fact, hurts a great deal.

The next 11 minutes felt like 45 to me. Hit after hit, my adrenaline began to wear off, replaced by a will to survive. My fight-or-flight response went quickly from fight in the beginning to hiding behind any disabled car that could provide adequate cover.

The shift interlock release, something I had never used to date on any vehicle, came into play as well as the shifter refused to move in any normal manner. The car itself also started to sputter, stall, and overheat with each hit to my front corner panels. Yet, after ten minutes of punishment, my front end remained relatively untouched. The engine, when running, ran fairly strong. It wasn’t until the very end when a badly placed bumper skin took away all hopes of traction.

Disabled, unable to move, but with my engine still running, I spun the wheels of the Focus trying to get away from my impending doom. A mid-90s Toyota Deathwagon (aka Camry Wagon) was circling, looking for its final prey. It spotted me, took a nice, long run, and I witnessed in slow motion as it struck me one final time. 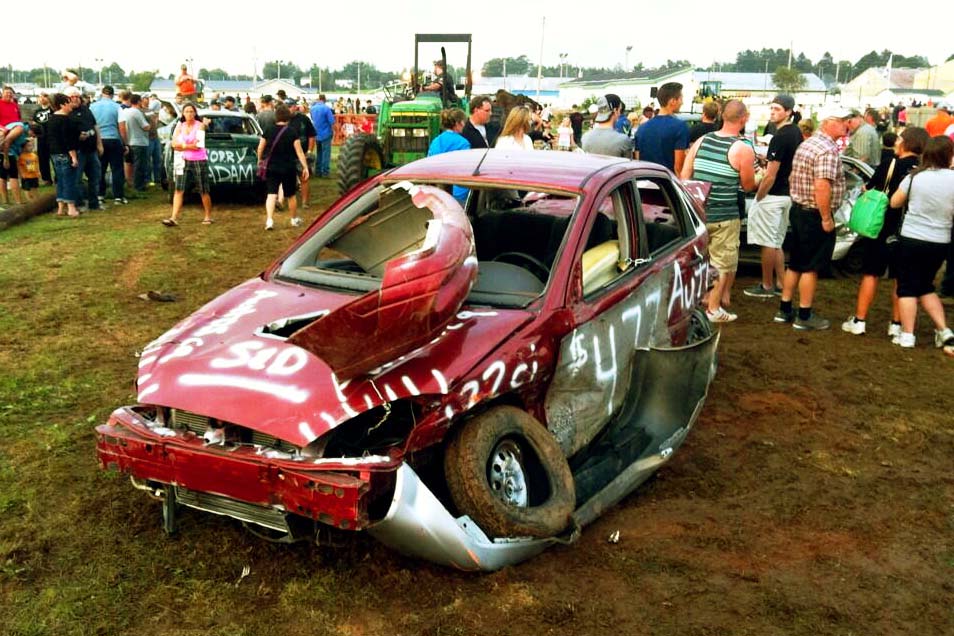 The derby had ended with another blow of the firetruck’s horn. I was the last one out, placing me in a respectful second.

As spectators flooded the field to take a closer look at all the twisted metal and congratulate the winner, I extricated myself from the Focus, took a step back, and marveled at how well it had fared. The passenger side was a complete write-off, as was the rear I used as a battering ram. But the front bumper and driver’s door remained relatively untouched, thanks to both my hiding and getting a little respect from other drivers.

My memory of the rest of the evening – which consisted of packing up the car with all its detached bodywork, taking it to the scrap yard, and having a self-addressed congratulatory beer – still remains spotty to this day. Concussion? Maybe. But I was in much better shape than the Focus.

And, all of this was due to making an idiotic financial decision. I’d do it again in a heartbeat, too. Sometimes ignorance truly is bliss, even when it hurts for a week after.

About Mark Stevenson
Mark Stevenson is a former IT professional turned freelance automotive writer and news editor. He's a past contributor and current managing editor of The Truth About Cars.
Follow me
You may also like
AdChoices
Latest Articles