It's something I had wanted to do since I was a kid, but I never thought I would get the chance. To attend a Major Auto Show. On media day. As media. A dream since I picked up my first issue of Car and Driver, way back in 1996 (Viper GTS vs. Yamaha YZF1000R). Well this year at the 2016 New York International Auto Show, I was finally given the chance to go. To photograph, to write, to run, to get sore feet, to exhaust myself, to visit the Big Apple. So what's it like going to your first auto show? Stressful and amazing.

It started with short notice. About a week before the show, Senior Editor Jonathan Yarkony sent me an email that made my heart skip a beat: "Would you be able to get a couple days off work to cover the NYC Auto Show?" You better believe I can, and if I can't I'll be looking for a new job when I get back.

Fortunately it didn't come to that. I spent the next week eagerly waiting for flight info (got it three days before leaving) and hotel bookings (didn't get those until I was already in the air). If you're an obsessive planner like me this isn't ideal, but the wait was worth it. Like I said, I wasn't sure how these things worked. I wasn't sure if there was a dress code, what I was supposed to do, anything. The advice I got for dress code was "dress well". Dress well like a polo, or dress well like a suit? No reply. Well, I better do some ironing.

Tuesday morning, I waited in the hotel lobby for my drive to the reveal of the 2017 Buick Encore. I was with three other Canadian journalists, but I was the only one who looked nervous. Once there, I quickly grabbed a seat at the front. That turned out to be pointless, but I had a great view until about 50 photographers barged in front of me. There was a light lunch before the reveal, where I had some of the best hummus I've ever tasted. Not sure if it was really that good, or if it was the excitement of the event. After the cover came off it was an hour of scrambling for photos with everyone else, while trying to stay out of frame of the news interviews and video guys. It was hectic, high energy, and a lot of fun. It was also done by 2 pm. That was nice, because I had never been to New York, and there's not a lot of time to sight see on a 41-hour working trip. Fortunately I got to see one of NYC's finest tourist hot spots. 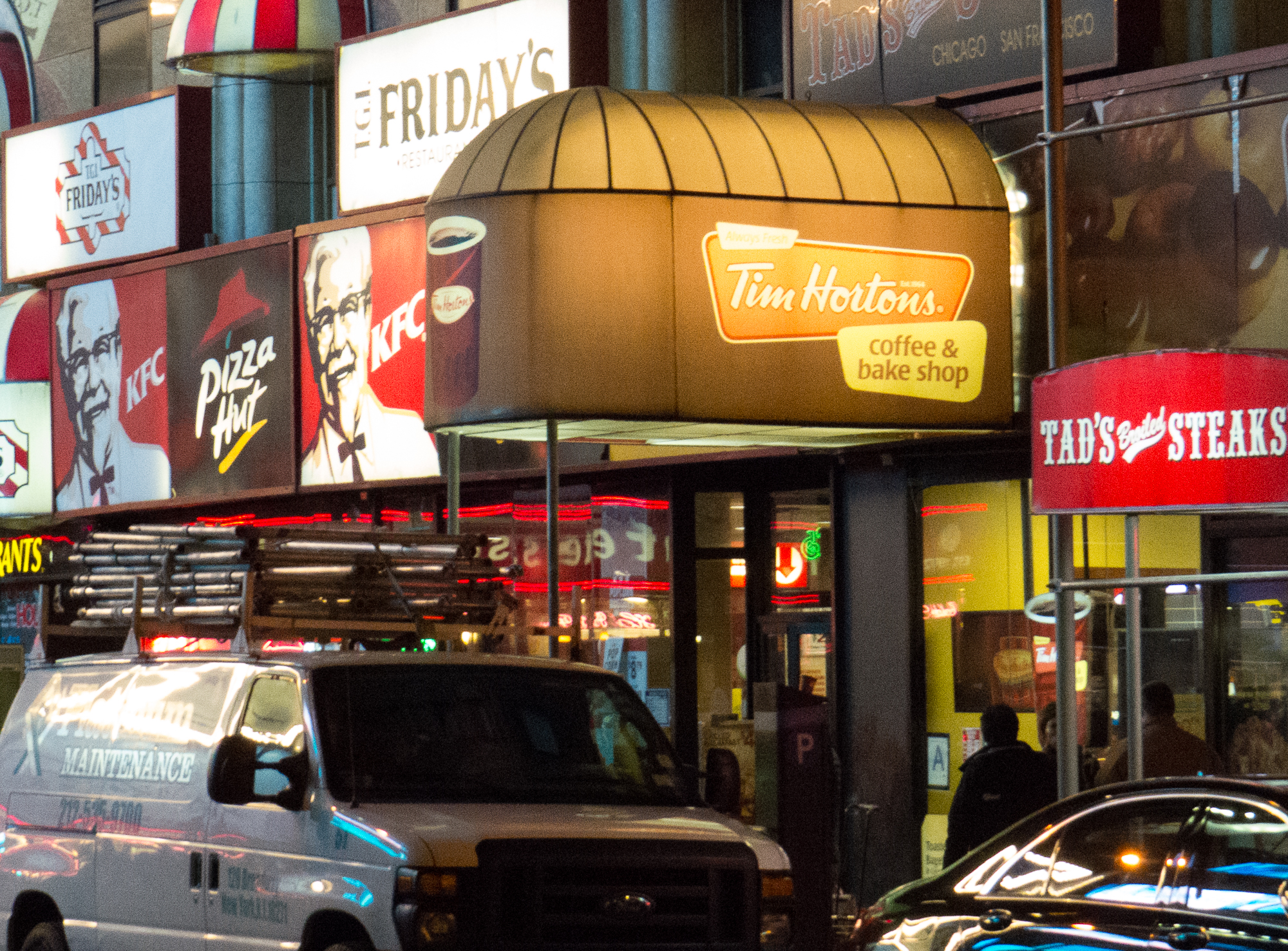 Wednesday morning. Showtime. I've got my luggage with me, since I'm heading to the airport at 1 pm. This is great fun when there are 200 other people trying to get in, and the show has airport-style security. Sorry to everybody behind me in line.

I walk in and look around; I'm not in the show hall proper yet, but there is a Kia dune buggy, some new Trans Ams, and a Mustang hanging from the ceiling. And the line at Starbucks is longer than the line to get in. 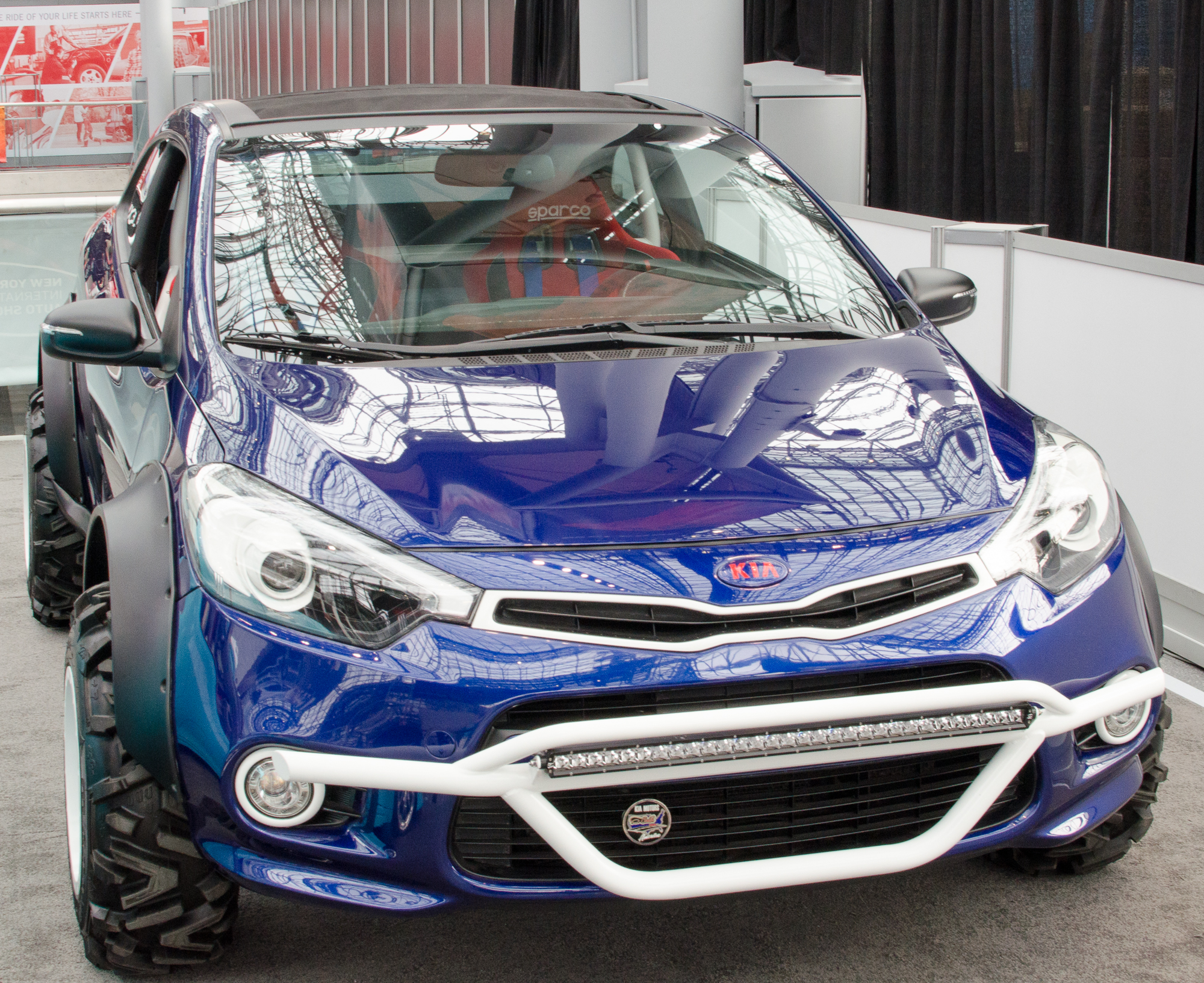 Stash my suitcase, grab my camera, and... wait in line again. I have a pass, but I need to show ID and get a wristband. Okay. Now I'm in. First thing I see is the Nissan booth. Sure there are probably some nice Sentras in there… I think… but look at the vintage GT-Rs! To my left is the Ford booth with a bright yellow GT. Okay, heading over that way now. Keeping an eye on my watch, because I need to be at the Hyundai booth for the Ioniq in an hour. The show floors are nearly 80,000 square metres, stretching over four floors and six blocks, and I want to see as much as possible so I need to be moving. Now. Make sure you wear comfortable shoes. Turns out mine weren't as comfortable as I thought they were, which is a mistake I’m going to pay for. Flying through Dodge, Chevy, Cadillac, Honda, Toyota, time for glances at the things that really catch my eye. The ATS-V, ZR1, almost missed the ZL1 Camaro. Oh hey, there's VW hiding in the corner! Every manufacturer has an espresso machine set up. Looks like they all have peanut M&Ms, too. It's strange, but they are everywhere. I don't have time to wait, so I'm passing on the coffee and walking quickly through booths. As I'm walking past the Rolls and Bentley display, I hear a guy asking the security guard, "What's the sticker on one of those?" and all I can think is, "More than you can afford pal – Rolls Royce." 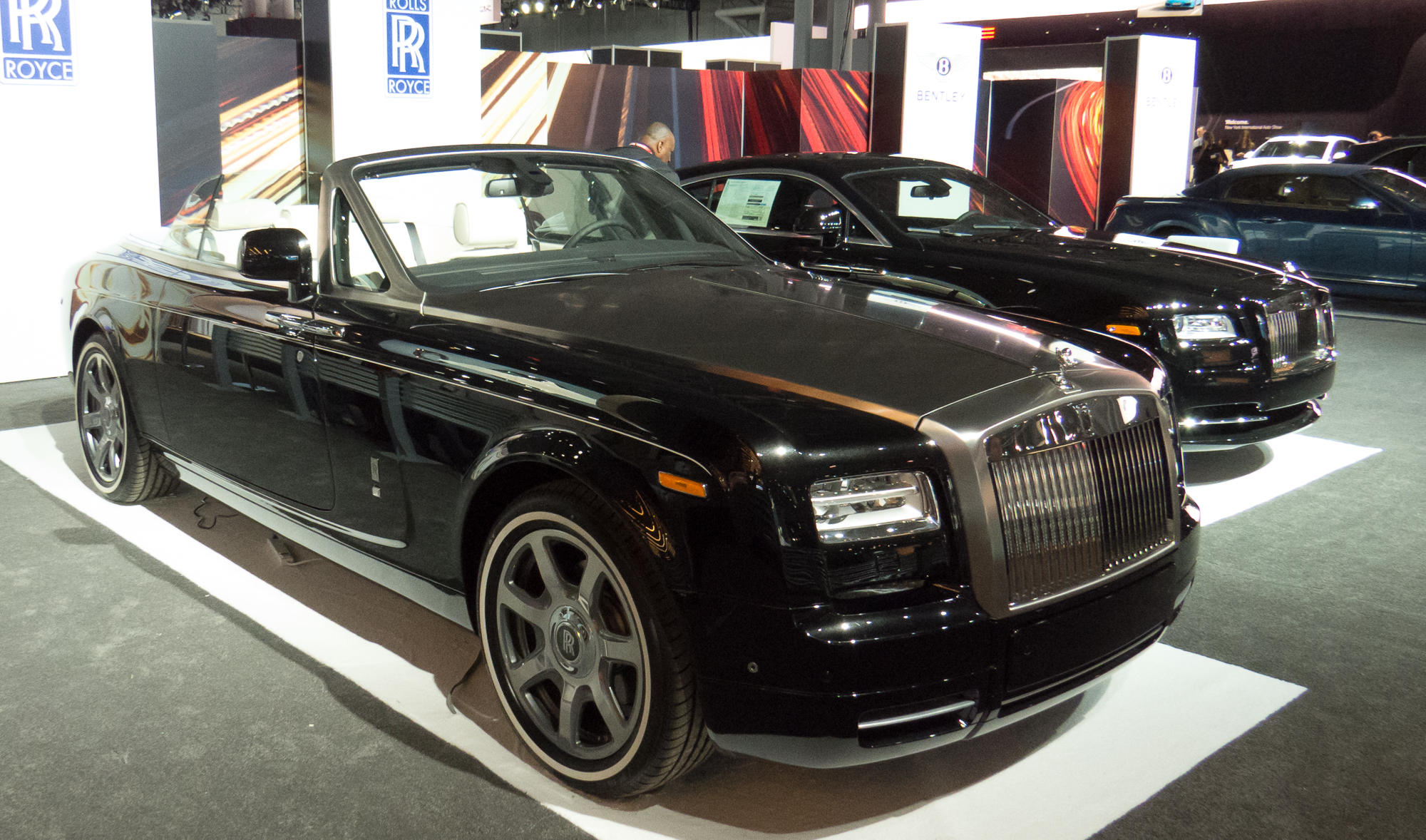 I'm getting tight on time, so I head back to Hyundai. There's about 15 minutes left and there's nobody there yet, so I take 5 minutes to go try a racing simulator Dodge has set up in a Viper. Full four-post rig so the car is really moving and bouncing, and it feels pretty real. I get out of the Dodge, and instantly notice Hyundai is now full. Great. It's for the best, as since I have to stand I can get off to the side and actually end up with a better view than any of the seats. Listen to 30 minutes or so of presentation, snap the best angles I can, then run back to the media room to upload photos and write. 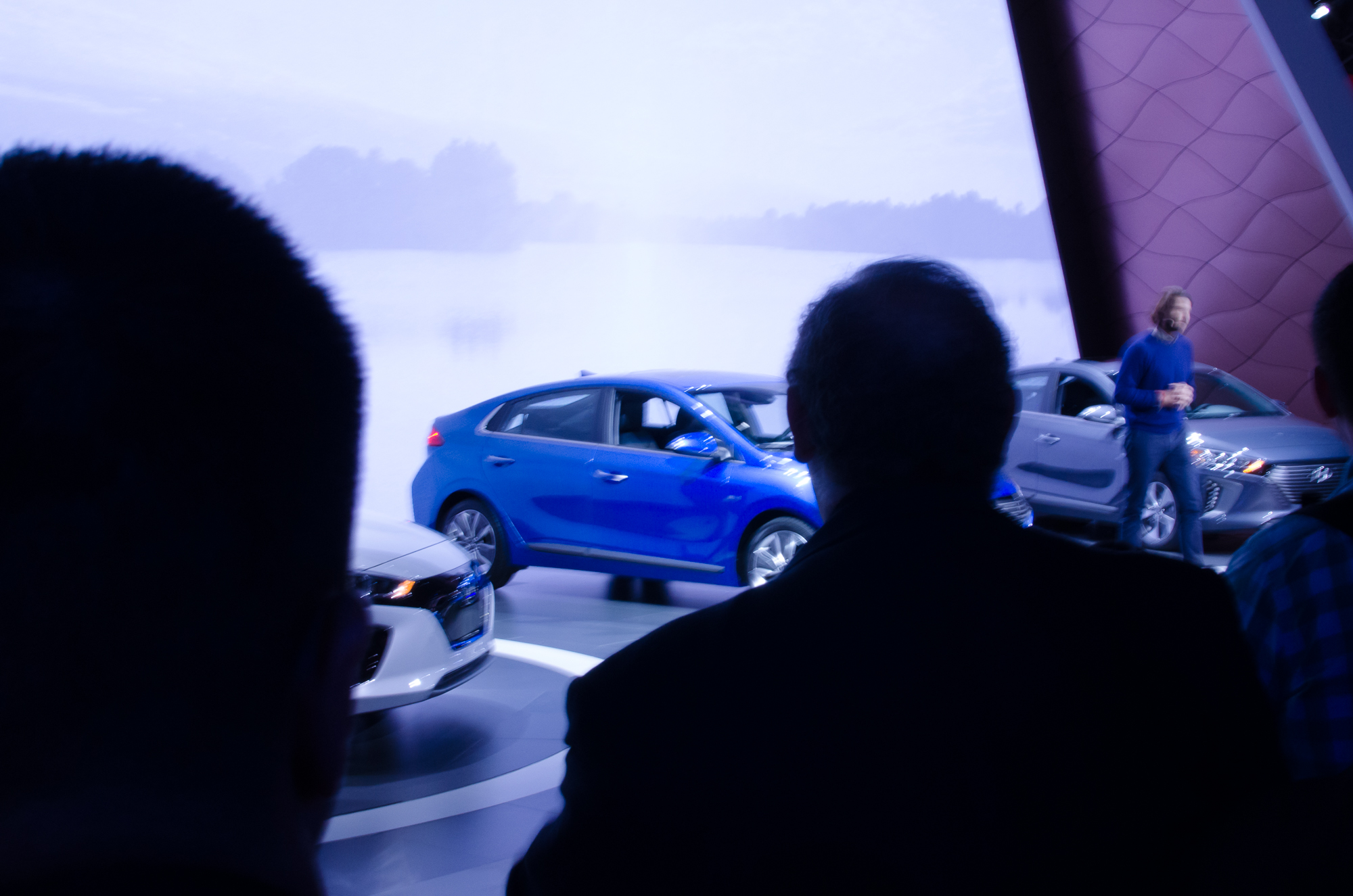 Okay, now that that's done, I have another hour or so before I have to be at the Subaru booth. Where is that, anyway? Of course, it's as far away from where I am as is possible. That's okay, I get lots of time to see the rest of the cars and make my way over. This time I grab some M&Ms, but still no time for an espresso. I notice that all the trucks are downstairs, so I take a look. Lots of displays showing how much everybody's trucks will haul. It's an impressive amount of plaster and foam cargo. I see a large number of Toyota show trucks, notably the Tonka 4Runner and the Marty McFly Tacoma. There's a local tuner shop set up down here too, but I don't have time to go by there. Walking to the North Hall to get to Subaru, there are some interesting cars along the route. Most notable is a replica of Chitty Chitty Bang Bang, and an MX-5 with no windshield or top. 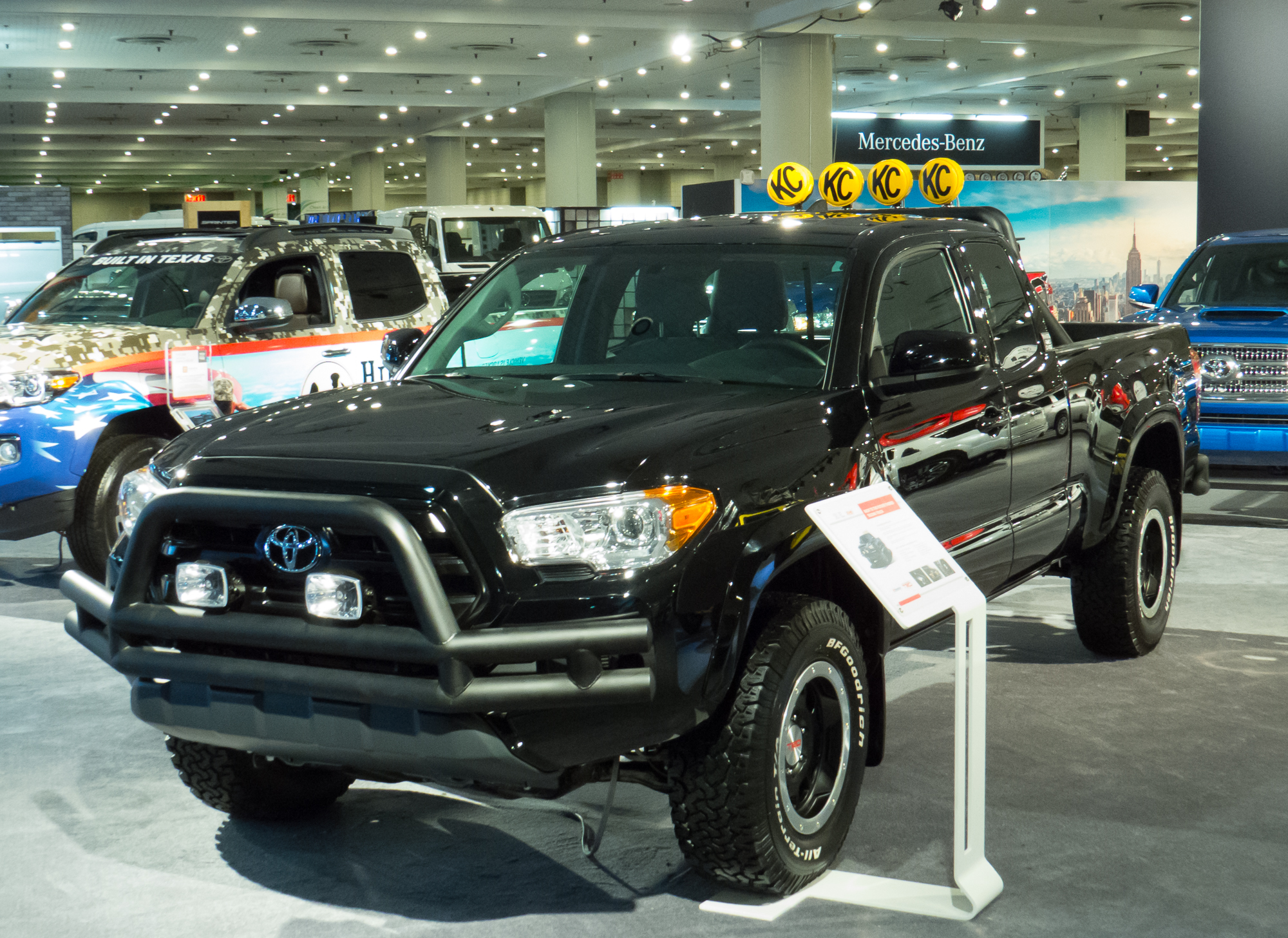 Ok, I’ve made it to the Subaru booth and I managed to get a good seat. I'm here for the 2017 Impreza. This was easy. Wait for them to stop talking, snap the cars as they roll onto the stage. Wait another five minutes of presentation, and at the magic words I jump up and start snapping. Hoping there’s a good one in there, I walk up with everyone else and join the lines to get interior shots and jockey for position to get outside shots. It’s now 12:45 and I have to meet my shuttle to the airport at one. So I’m running the six blocks back to the media room to grab my laptop and bag and get to the pick-up point. Except the rest of the group is late so I’m waiting 20 minutes anyway, but eventually we’re on our way to the airport. 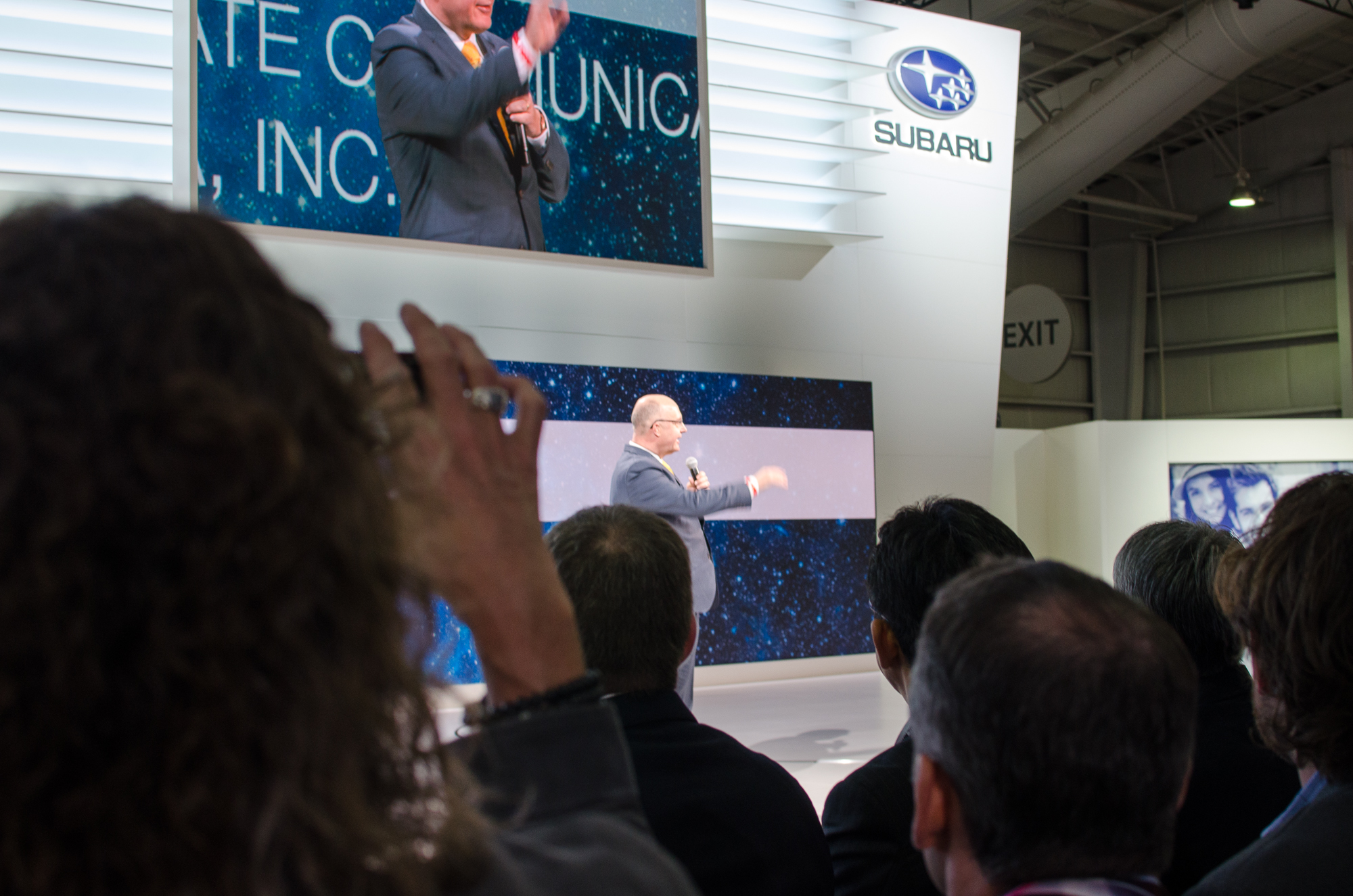 It was a crazy 41 hours, but New York is an amazing city and the show was an intense experience. I’m already checking my calendar and hoping for an invite to the next show, which looks like Paris in September. (Hey, Ed. are you listening?)