BMW Canada is shifting into high gear when it comes to performance. But it’s not just focusing on its vehicles, it’s also aiming to raise the bar for Canadian athletes at the 2016 Summer Olympic Games in Rio de Janeiro, Brazil, August 5-21, 2016. BMW Canada kickstarted the new year by introducing Team BMW, an elite group of six high-performance athletes aiming to compete at this summer’s games – all in a bid to garner more Canadian medals than ever before.

Team BMW includes:
Roseline Filion: Aquatics Diving and synchro diving partner of Meaghan Benfeito. Holds gold, bronze, and silver medals from various competitions including the Olympic Games, the Pan Am Games and World Championships.
Meaghan Benfeito: Aquatics Diving and Filion’s diving partner. At the 2012 London Olympic Games, won bronze with Filion and was a double gold medalist at the 2014 Commonwealth Games in the 10m and 10m synchro events.
Mark de Jonge: Canoe-Kayak Sprint. Won bronze at his Olympic debut in London in 2012 and gold at the World Cup and the Toronto Pan Am Games in 2015.
Derek Drouin: High Jump. Won bronze in a three-way tie in the high jump event at the 2012 London Games and gold at the 2015 Pan Am Games and the World Track and Field Championships.
Brooke Henderson: Golf. She turned pro in December 2014 and earned her first pro win at the 2015 Four Winds Invitational and was named the Canadian Press 2015 Female Athlete of the Year.
Ryan Cochrane [not present]: Aquatics: Swimming. One of Canada’s most-decorated swimmers with six medals at the FINA World Championships, a bronze medal at the 2008 Beijing Olympic Games, and a silver medal at the 2012 London Olympic Games. 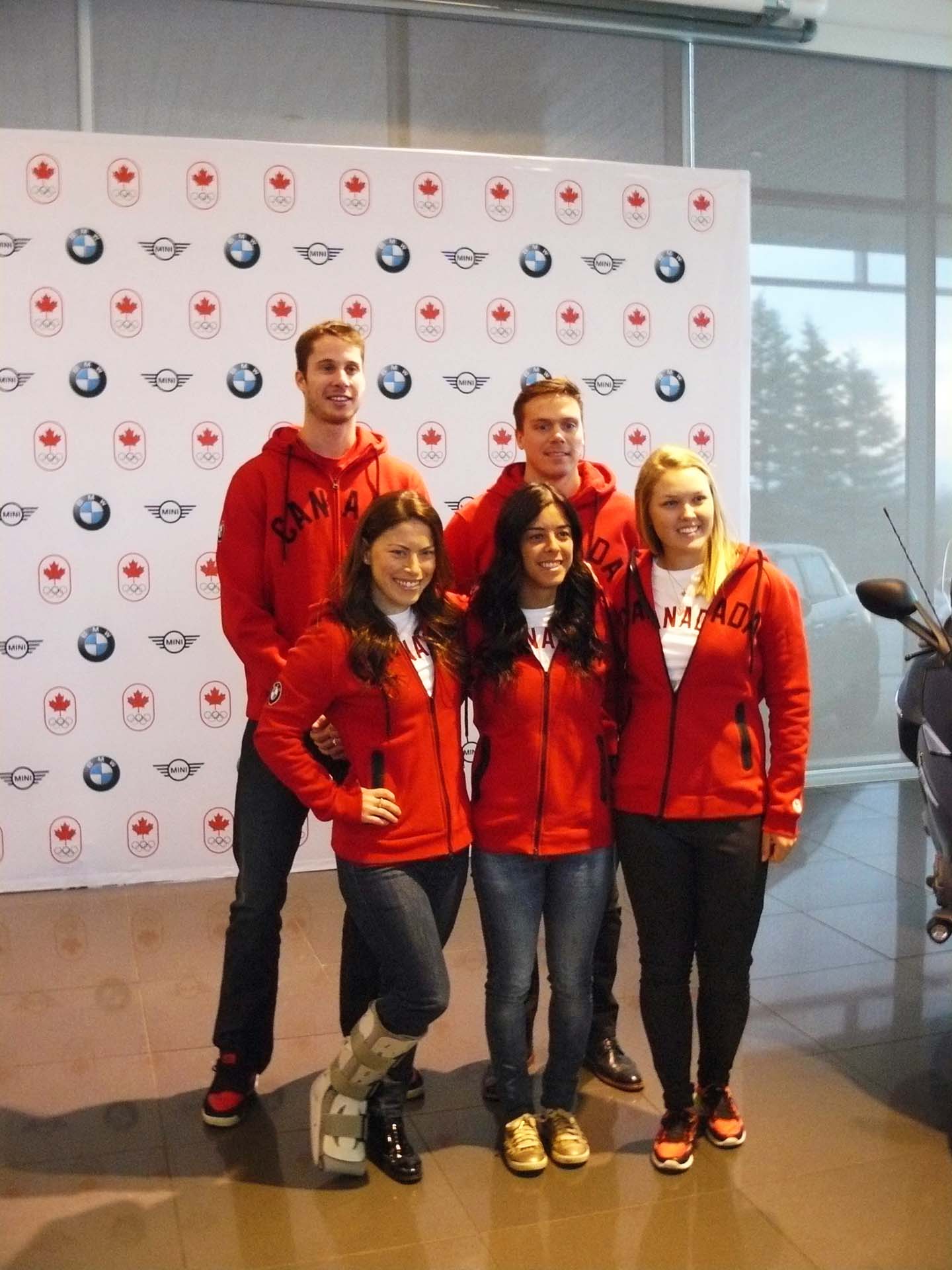 Besides BMW’s role as National Partner and Official Vehicle of the Canadian Olympic Team, the company offers support to Team BMW athletes on their road to success. And part of that includes a new Bimmer to get athletes to practice and back. The athletes took a break from talking sports to chat about cars. Here’s what they had to say.

Petrina Gentile: “Which Bimmer do you drive?”

Mark de Jonge: “A BMW 435i. I got it with a manual gearbox so it’s fun to drive. Driving manual is like a dying art. I respect the history of cars. When it came out in 2011, I saw it and actually test drove it before I ever thought I could be a BMW athlete. I said someday I will have this car. If I had all of the money in the world I would buy this car.”

“I always name my cars. I call this one Fritz. It’s a German name. It’s got a pompous sound to it. It’s nice.”

Roseline Filion: “I chose an X3. I was driving a Mini before and if I was going to change I’d make a drastic change. I really wanted to have an SUV and to have a bigger car is something I wanted to try and I love it! I like the look. It’s luxurious, smooth, comfortable, and powerful.”

Meaghan Benfeito: “I went with an X4. I like hatchback cars. I used to have a Mazda3. The hatchback attracts me so much and I wanted to change from a car to an SUV because I had the opportunity to choose what I wanted.” 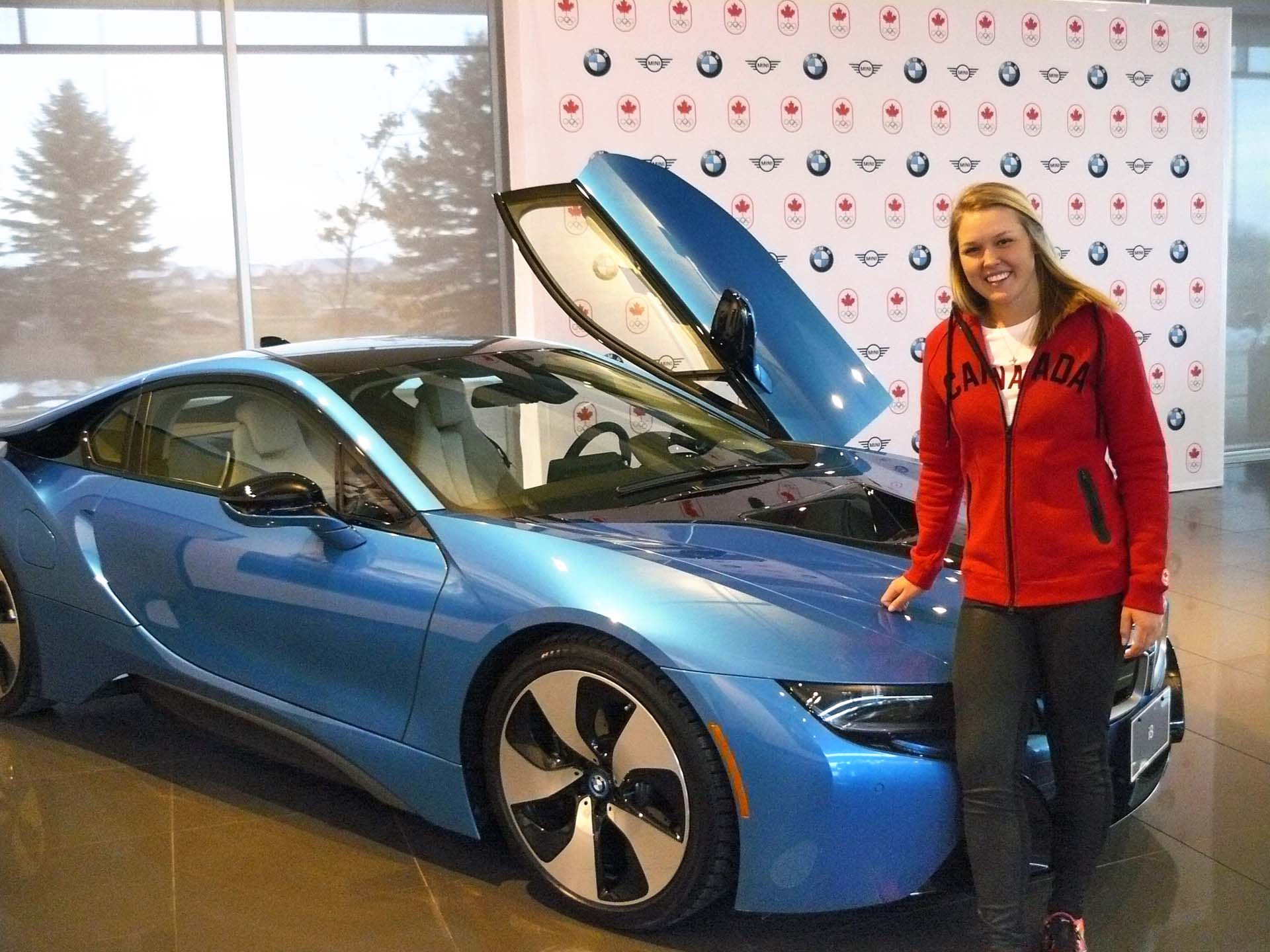 Brooke Henderson: “I picked the X5 and it’s perfect because it fits my golf clubs and all of my luggage. It’s so high tech and I love the heated seats!”

Derek Drouin: “I chose the X3. I need something that’s a bit bigger that I can fit in. I’ve never driven a BMW before and I’m impressed with everything.”

Petrina Gentile: “Does it have the power and performance of an Olympic athlete?”

Roseline Filion: “Of course, it’s powerful and goes fast without you noticing. Sometimes I look at the speedometer and I go, ‘I have to slow down!’ and you don’t even feel it. It’s a really smooth ride.”

Mark de Jonge: “For sure. It’s a nice strong car. It’s not overdoing it. It’s very refined. It’s a sporty, sophisticated, professional looking car. It spoke to my personality. I see that car as a well-made machine and I think every day when we’re training we’re trying to be better – it’s a nice blend of athleticism and classiness, which I like.”

Meaghan Benfeito: “Yes it is powerful. It looks aggressive and mean. I like that!” 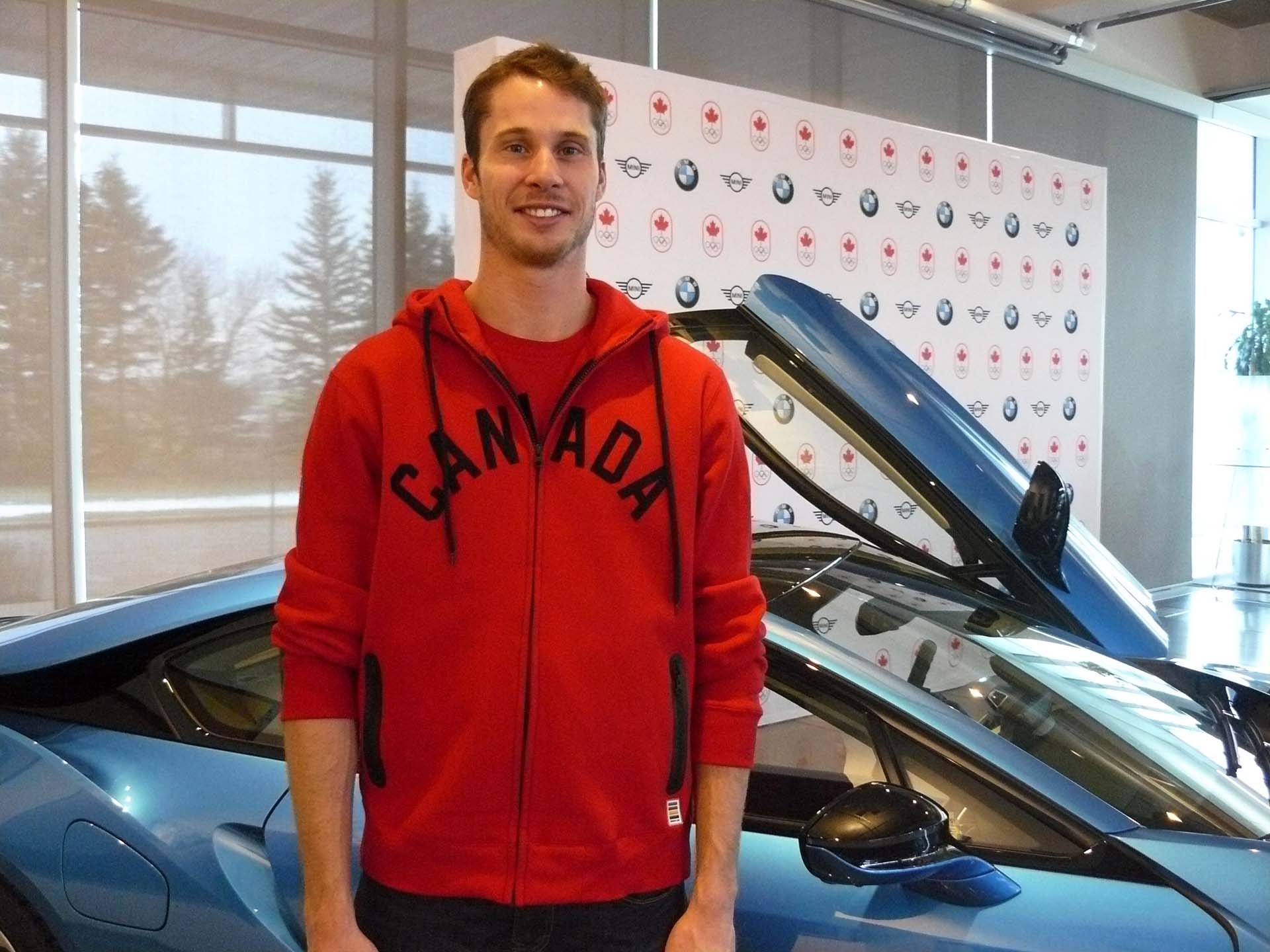 Derek Drouin: “Yeah. It has the speed and performance of… me! I think it’s an awesome fit.”

Brooke Henderson: “It does, for sure. High performance is BMW. It is so strongly driven to perform and to succeed. And that’s exactly what athletes are like, especially if you’re going to be in the Olympics. I like to think I’m a high-performance athlete as well. It’s an amazing fit between BMW and the other athletes.”

Petrina Gentile: “What was your first car?”

Roseline Filion: “I bought a Mini. I got it at 20. I got my license at 16 but I was saving up my money to buy the car I really wanted. It took a while. I didn’t have a car at 16. Like most of my friends I was using my mom’s car. It was definitely worth the wait.”

Brooke Henderson: “My first car was a GMC Terrain. It only lasted a few months and then I was upgraded to a BMW X5 so that was very nice.” 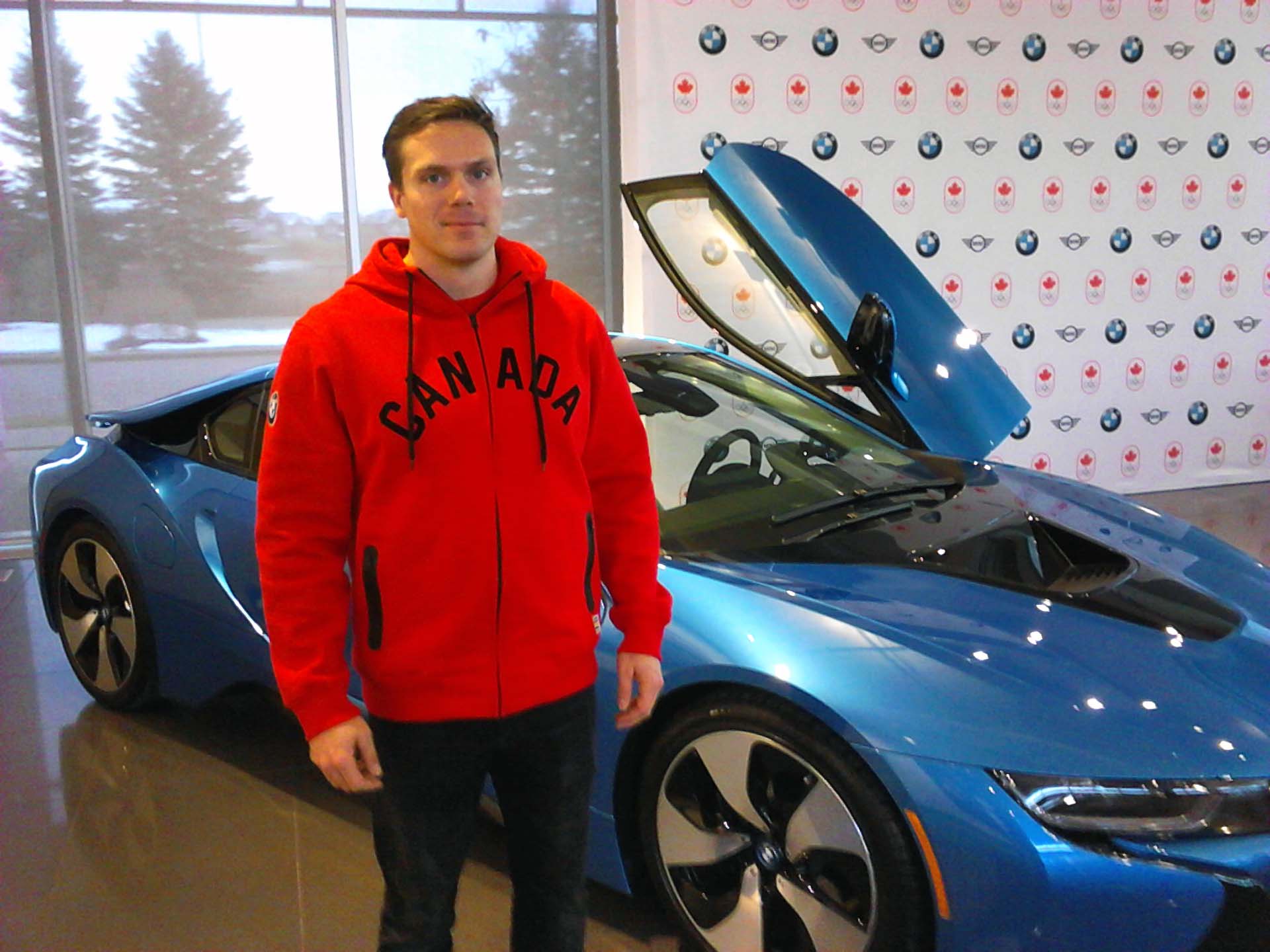 Mark de Jonge: “A Jeep Cherokee was my first car that I bought. Before that I was borrowing my parent’s car. My wife has the Jeep, which is practical for picking up plywood or whatever we need to get. I have my other car, which is fun.”

Petrina Gentile: “Have you had any embarrassing moments on the road?”

Mark de Jonge: “Actually I have. I stalled the car once. And I saw these teenage girls behind me in the car laughing. They’re probably thinking, ‘that guy in the BMW can’t drive his car!’ That was funny.”

Petrina Gentile: “If you make it to the podium in Rio what will you treat yourself to?”

Meaghan Benfeito: “I’m not someone who likes to spend my money. I have a hard time giving my credit card. But probably this time it would be a trip with my sisters, probably to the Caribbean.”

Mark de Jonge: “Honestly I’m in my dream car. I would love to take it to the track to see the power and the different dynamics. The day-to-day driving is perfect but you can also go on the track and have some fun with it.”

Derek Drouin: “An actual vacation. We travel a lot, but it’s mostly a lot of seeing hotels and tracks and not much more. I’d love to travel. I’d probably go back to Australia. That’s the first thing I would do.”

Brooke Henderson: “This i8 is looking pretty nice right now, but that might be pushing it a little bit!”