Before we get into the specifics of Furious 7, it should be noted that the fact that this franchise has managed to turn out seven separate films is an impressive feat in its own right. Few movie franchises have been able to pull off this feat; even the Star Wars franchise, featuring one of the most popular movies of all time, will have taken 38 years to hit the seven-movie mark when the next addition to the franchise drops later this year.

Of course, the cynic in me would say, “Well, if it continues to make money, then they’ll continue to churn them out.” However, in the case of the F & F franchise, well, I can’t fully subscribe to that logic.

For, in this reporter’s modest opinion, it’s hard to pick one single series entrant that disappointed the way the likes of The Godfather: Part III or Beverly Hills Cop III did for the fans of those two series. Of course, one can argue that the original Godfather and its sequel were so good that the third was bound to fail, but on average, I have to say that the F & F series has managed to keep us all legitimately satisfied. [Maybe it's because the second one was so bad... –Ed.] Of course, Universal Pictures is making plenty of money off them, but it appears that the green tint on the glasses of the Universal execs isn’t too dark, or at least, it isn’t on those worn by director James Wan (Saw, Insidious).

So how have they done it? What does it take to keep something relevant in today’s media landscape and all the short attention spans that need to be harnessed?

It couldn’t just be about the cars. On the surface, I guess you could say, “Just use new cars. There are new cars every year; just get the hottest ones,” but there are video games out there that can do that for a lot less coin than Hollywood can, no matter how big your budget is. Forza Horizon 2 for the Xbox, for example, has 212 cars to sample (there’s also an F7-themed version you can download for free).

It can’t just be about the racing, either; in fact, the films in the series that get the highest ranking on Rotten Tomatoes have very little racing whatsoever. Yes, I know colleagues who complain that losing the grassroots-esque street racing – so prominent in the first three films – hurt the franchise, but I disagree. 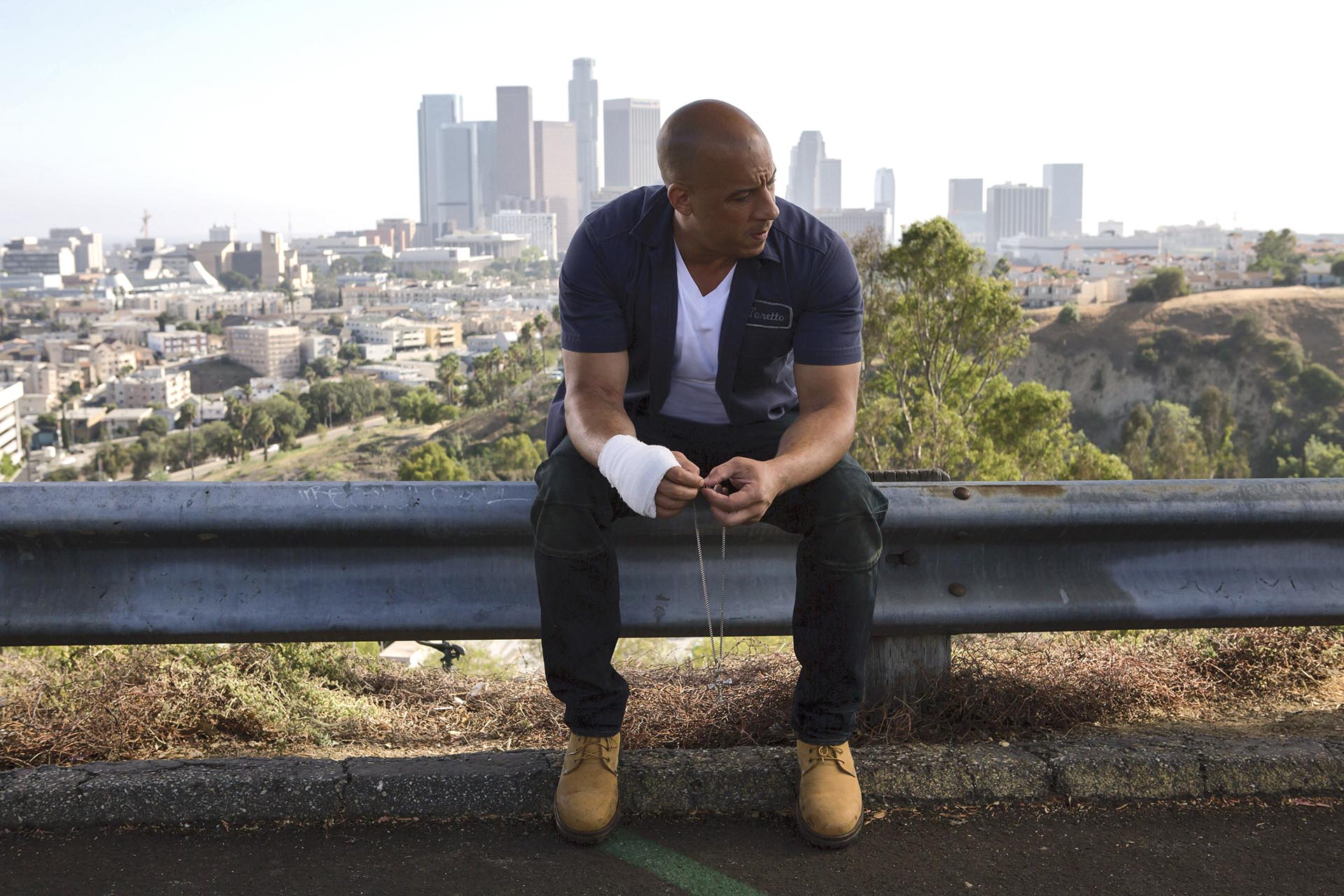 It’s hard to really identify with a character when all you see of him or her is a shot through the pillbox-like windscreen of a souped-up Acura Integra. However, as soon as you start journeying with them through the trials and tribulations of a life of crime, family – and yes, of course, cars – things change.

Furious 7, meanwhile, starts right where TD and F&F6 left off (which is the same place, just from slightly different angles). Han’s dead, the baddie from F&F6 is laid up in the hospital and his brother, Deckard Shaw (Jason Statham in all his cockney glory), is out for revenge and little else. He’s described by one of the film’s characters as a former British SAS super-soldier that now “lives in the shadows”, but that’s a little hard to believe, considering the evidence we see of the destruction he wrought while trying to get to his brother, whose hospital was under heavy guard that obviously wasn’t quite heavy enough.

Switch to our favorite crew of street-racers-cum-super-criminals; after the last film’s events, they’ve now gained their freedom, and are living fairly ordinary lives back in Los Angeles (in a cheeky reference to suburban life, Paul Walker’s Brian Spilner even drives a Chrysler Town and Country minivan). Seeds of unrest have been planted, however; Brian’s baby-mamma, Mia (Jordana Brewster), senses it, admitting to Dom (Vin Diesel) in a quiet moment that Brian “misses the bullets.” Be careful what you wish for, Brian.

And finally, we have Agent Hobbs (Dwayne “The Rock” Johnson), who’s actually the first of our crew to face Shaw, who beats him soundly in a heavy-hitting fight that you can feel in your bones. It’s Hobbs, from his hospital bed, who officially-unofficially sends Dom and his crew to sort Shaw out.

“But wait!” I hear you saying, “Why can’t Hobbs just use his agency; what does he need Dom’s team for?” Well, there wouldn’t really be a movie then, but just in case that’s not a satisfactory answer, series newcomer Kurt Russell shows up to add some government covert-ops spice. “Mr. Nobody”, as his character’s called, needs Dom’s help to nab a terrorist (played with relish by Djimon Hounsou, to the point I would have liked to see more of him), and in exchange, he’ll provide a device that will help them get to Shaw. Because, Mr. Nobody explains, Dom’s team (yes, Chris “Ludacris” Bridges and Tyrese Gibson are back) works out of the limelight, just like Shaw does.

The thing about the story arc of Furious 7, however, is that it actually takes a little while to get to the action. Which brings me back to my original point: you realize that while they were just a bunch of street racin’ kids at the series outset, you’ve really, truly come to care about these characters. You hope that Letty (Michelle Rodriguez) regains her memory. You hope that Hobbs, who’s revealed to have a daughter, gets out of that bed and is back to being the skull crackin’ DEA agent you hated when he first appeared in Fast Five, but were completely endeared to by the end of F&F6. And of course, you hope that Brian makes it out of this one, because you know what happened, not two years ago, to the man that plays him.

It’s that underlying theme the permeates the whole movie; you really want to watch very closely, because whether there will be an eighth episode or not, it will never be quite the same without Walker, who made his name after starring in The Fast and the Furious. In an off-screen nod to the importance of family, Walker’s brothers – Caleb and Cody – are on hand to finish the work Walker couldn’t do before his untimely passing.

Indeed, after the accident, there was a chance that F7 wouldn’t get finished at all. When you consider the theme of “family” that father/brother-figure Dom has preached since the beginning, though, it’s almost as if they had to finish the movie, if nothing else than to honour Walker.

Of course, when the action does get going, it gets going thick and fast, and we’re privy to some of the slickest stunts ever seen not just in this franchise, but in the Bourne Identity, Lethal Weapon, Die Hard and Matrix franchises combined. I’m not kidding; I mean, they drop muscle cars out of the back of a plane, on purpose. Who does that?

Wan, free of his horror-movie shackles, does. He’s attacked the subject matter with vigour, creating an action masterpiece that should be seen, whether you’re a fan of the franchise, of action movies in general, or of movies that are true to their source material, but are able to leave their comfort zone to tug on your heartstrings as well.