Tundra, Sierra/Silverado, F-150, Titan, and Ram. Three are locations, one is a number, one is a mythical race of powerful Greek deity, and one is a horned goat-beast that hangs out on mountainsides and smashes things with its skull.

But, as a group, the above list forms the full range of full-sized pickups available to Canadians in the used truck marketplace. If you’ve decided on a new-to-you big pickup, one of these is going to wind up in your driveway.

So, here’s a look at the owner-stated draws to each, as well as a list of what some owners say shoppers should be on the lookout for. 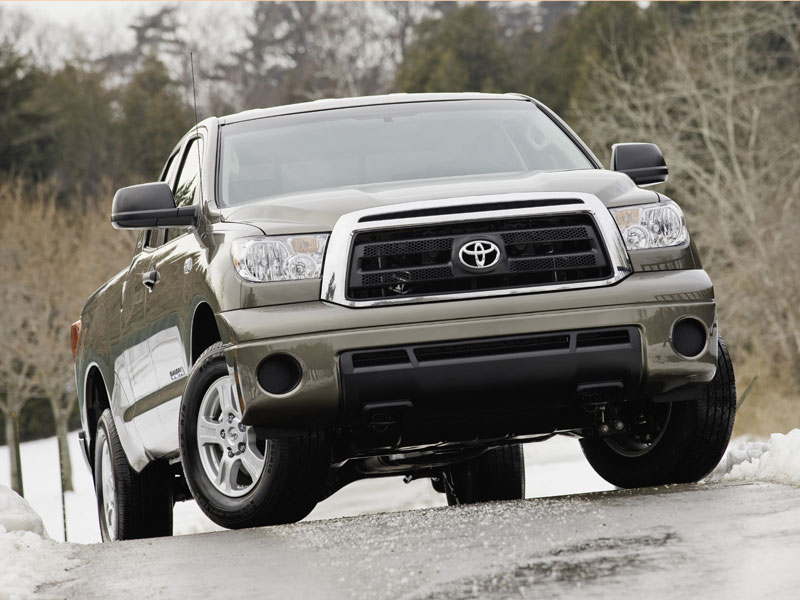 The Draw: Check out the selection galore, with two V8 engine options, plenty of options and trim grades, available upscale feature content and goodies. Look for available leather seating, a premium stereo system, automatic climate control, a self-dimming rearview mirror and more. The first word most owners put on their list of likes for this generation Tundra? “Power”. Towing capacity, a quiet highway ride, overall comfort and smoothness round out the package. Some owners even report good fuel mileage, which is rare in a used pickup review.

The Test Drive: Be sure to listen to the Tundra you’re considering closely in a variety of driving conditions, and in particular, at low speeds while loading and unloading the driveline with the throttle. Ensure there are no unwelcomed sounds. If you’re suspicious, have a mechanic take a closer look. Note that these issues seemed to affect mostly earlier Tundra models. For instance, some owners have reported a loud slamming noise from the rear of the truck, which could be caused by a faulty driveshaft spline. Some of these owners point at a Technical Service Bulletin issued by Toyota to address the problem (TSB-0115-08). A growling or clunking noise from the front differential area also indicates a problem.

While parked, wiggle the steering wheel of the Tundra you’re considering and forth a half-turn or so. You’re listening for any popping or clunking sounds, which could indicate a problem with the power steering rack. Unless you’re a mechanic or well-experienced in truck tuning, avoid models with extensive modifications to the engine, suspension or drivetrain. Lifted trucks, trucks with modified engine management or extremely large tires and wheels could be problematic in the hands of the wrong owner. 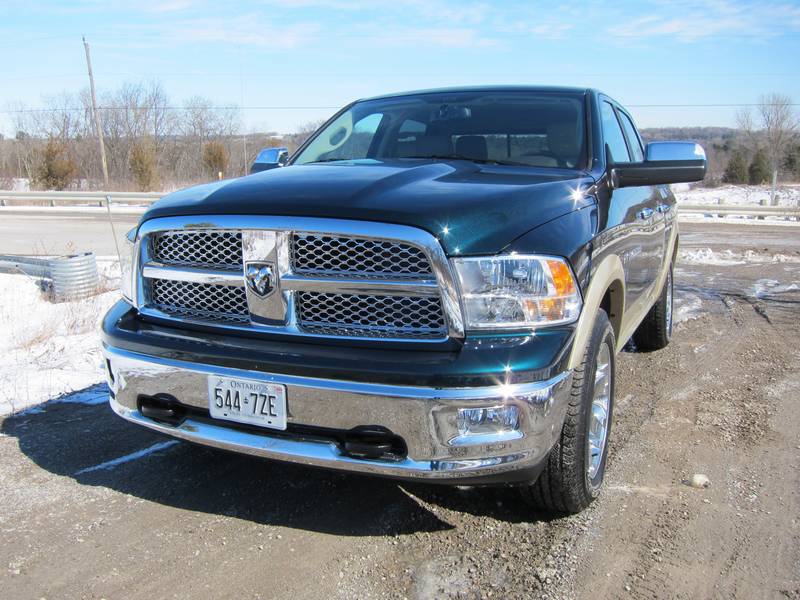 The Draw: Look for plenty of selection, available power from the award-winning HEMI V8 engine with cylinder-deactivation, plenty of handy on-board storage and all of the goodies at a reasonable price. Owners say they were drawn to the Dodge Ram for its value equation, that is, plenty of power, features and styling for the money. Performance from the HEMI is rated highly, as is the sense of on-board space, a tough feel to the ride on rough surfaces, and the 4x4 traction and confidence in slippery conditions. Handy touches, including the under-floor storage bins and RAM-BOX storage system helped round out the package. Look for two or four wheel drive, six or eight-cylinder power, and numerous body styles, trim grades, and options.

The Test Drive: Check the climate control system by adjusting between all fan speeds and distribution settings, several times. If you hear a loud knoc’ from behind the dash, and / or air comes out of the lower vents regardless of the setting chosen, the unit you’re in needs a new blender actuator mechanism. Further, if the heater fails to give off hot air, the climate control head-unit likely needs to be replaced, too. Some owner reports of premature seat wear or seat heater and ventilation failure means that shoppers should check for abnormal wear on the seat surfaces, and confirm that seating temperature controls work as expected. An engine that ticks loudly upon startup may require new exhaust manifold bolts, and any whining or squealing sounds from beneath the vehicle while driving could be the result of a transmission issue, or worn-out wheel bearings. Ram was loved for its power and style, but be sure to visit a Dodge dealer mechanic ahead of your purchase with the unit in question for maximum peace of mind. Ask the mechanic to see if the truck you’re considering has any outstanding recall work, too. 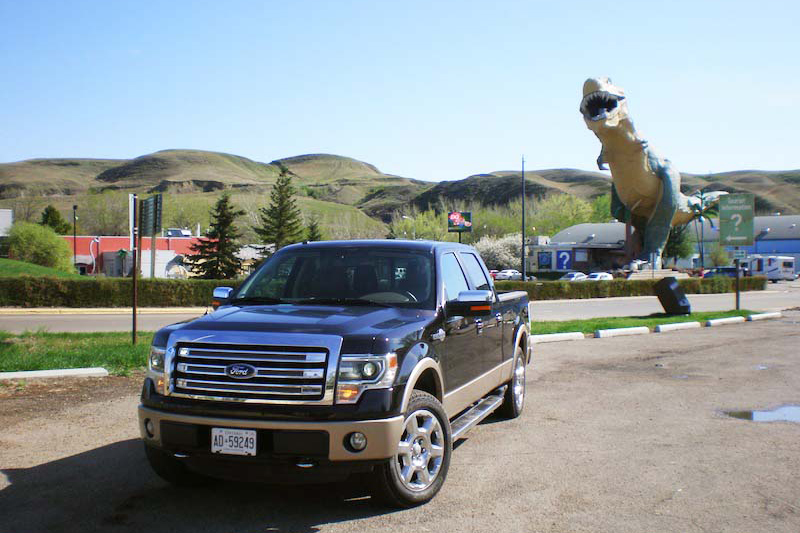 The Draw: Selection, heritage and available EcoBoost power helped set the Ford F-150 apart, as did signature features like the Ford Sync communications system and the rear-tailgate assist step for easy climbing up into the bed. Look for over 400 available horsepower, and numerous specialty editions to match an F-150 to any need or taste: from a low-budget work truck to a luxurious towing rig. Features in a used model may include navigation, heated and chilled seats, a sunroof, power-retractable side steps, a tailgate with fold-out assist step, Bluetooth, automatic climate control, wood trim, premium audio systems, power memory seats and more. Lariat and Platinum grades were top of the line, and on all models, owners tend to report a comfortable and solid highway ride, high-flexibility cabin, generous at-hand storage, and a nice blend of efficiency and power from the five-litre V8.

The Test Drive: Inspect the rear top and bottom corners of the cabin, as well as the outward portion of the rear seats between them, for signs of a troublesome water leak that’s likely the result of a bad rear brake-light seal. Fiddle around with the Sync system for a few minutes if equipped, ensuring all buttons and controls, including steering-wheel mounted controls, work as expected. Does the system fire up the navigation? Pair with your phone? Listen to your voice instructions? Or choke and lag like a Commodore 64 trying to play Doom 3D? Now’s the time to check.  Note that clunking or popping from beneath the truck requires further investigation by a mechanic, and could result from worn-out drive shafts or suspension components. At highway speeds, a vibration in the steering wheel while travelling in a straight line may be evidence of worn-out tie rods, and a super spongy brake pedal that feels like it’s made of pudding means you’ve got a serious brake problem that requires attention. If you’re opting for an EcoBoost model, avoid early units, which some owners say are more prone to pricey issues if they’re out of warranty. This one’s a good candidate for a full mechanical pre-inspection at a Ford dealer ahead of your purchase. 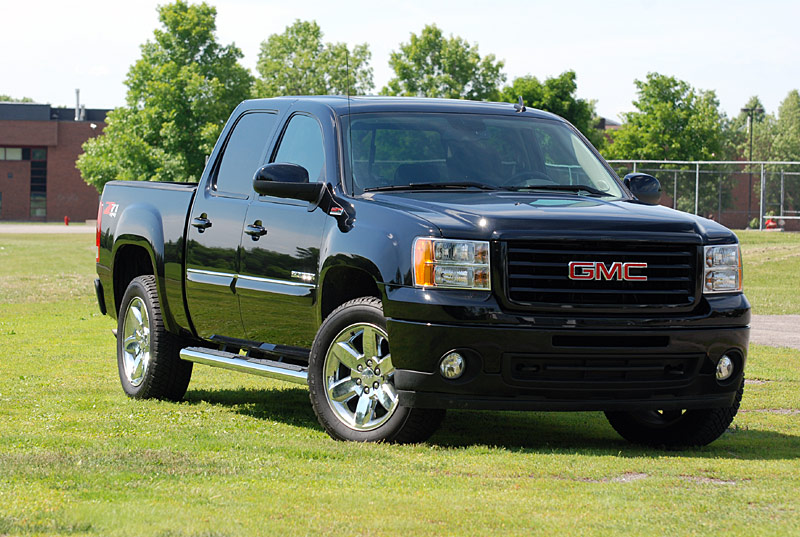 The Draw: These twins offered up numerous trim levels, driveline configurations, body styles and options packages to fine-tune it to a huge array of shoppers, who can expect to find plenty of selection in the used market. All-Terrain models got skid plates, a high-capacity air intake system, specially-designed shocks and a variety of cosmetic upgrades. The GMC Sierra Denali gave owners a taste of the motoring high-life with luxury features including Bose audio, leather seating, wood trim, climate-controlled seats and a touring-focused suspension calibration. An SLT model features common equipment upgrades bundled into a high-value package. Look for goodies like a locking rear differential, heavy-duty trailering package, upgraded wheels, chrome accents and heavy-duty cooling system provisions. Engine options included both V6 and V8 powerplants. Many of these rave about comfortable seats, a comfortable ride, good relative fuel mileage, great styling, and an underlying feel of toughness and strength to the platform and chassis.

The Test Drive: The biggest gripe reported from this era of GM pickups relates to oil consumption, which may be the caused by the AFM cylinder deactivation system on the 5.3L engine, which is likely the most common. The issues are well-documented on owner forums on the web, as are the results of attempting to have dealers monitor the oil consumption of affected trucks and make repairs and updates to fix the problem. Solution? Ask the seller if oil consumption has ever been an issue, and if that issue has ever been looked into. Confirm proper oil level and condition for yourself for peace of mind, or opt for one of the other engine options. Spend a few minutes cycling through any features and controls that operate on electricity within the cabin, confirming proper operation of the power / climate-controlled seats (if equipped), power windows, sunroof, sliding rear window, air conditioner and stereo system. Finally, check the dashboard for any signs of cracking, which isn’t a totally uncommon problem. Ensure proper operation of the cruise control system, as numerous owners have reported issues with cruise control failure caused by an easy-to-fix brake pedal switch. 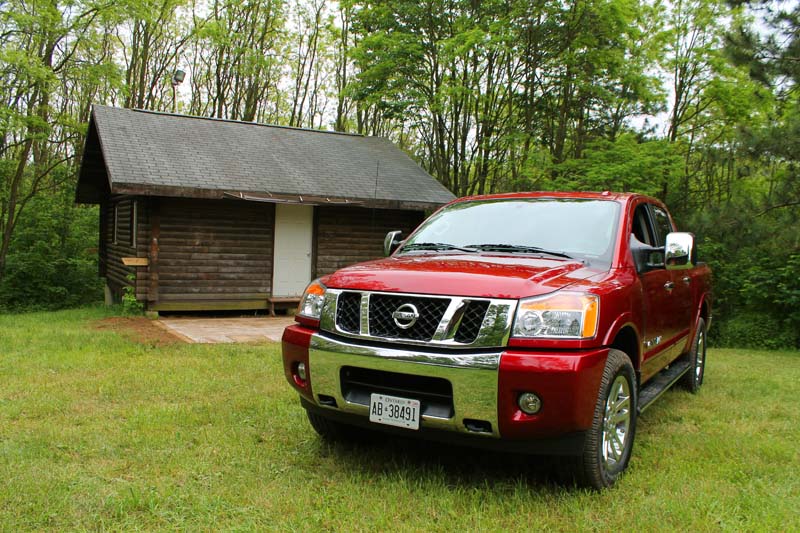 The Draw: All Nissan Titan models pack a 5.6L V8, offering horsepower well into the 300 range. Trim grades included the SL model, which is a luxurious workhorse. Look for four-wheel drive, manly-truck looks, and a variety of up-level equipment, including memory seats, leather, a voice-command navigation system, Rockford Fosgate stereo components and a household power outlet were all on board. Owners report a rugged yet comfortable ride, plenty of off-road confidence, and a pleasingly punchy V8. Pro4X models included additional off-road ready hardware, and Dana axles and Rancho shocks were standard or available, depending on the model in question. As with its competition, Titan was available in numerous configurations and trim levels, as well as with numerous options packages, accessories and drivetrains.

The Test Drive: Owner complaints relating to weak rear differentials in early models mean shoppers are advised to consider opting for a 2005 or newer, or preferably 2008 or newer model where possible, which also got upgraded brakes and other enhancements. The owner community also suggests checking for axle seal leaks, both at the differential, and in the form of oil splatter on the brakes or inside of the wheels. Owners also suggest ensuring the exhaust manifolds aren’t cracked, which could be evidenced by a loud ticking during idle, and that the transmission cooling lines and power steering lines appear to be in good shape and aren’t leaking. This one’s a great candidate for a mechanical inspection at a Nissan dealer ahead of your purchase for maximum peace of mind. If you’re unclear of the service history of the model in question, be sure to budget for a full fluid change, including the rear differential fluid.