Few companies in the world have customers as loyal as Harley-Davidson. Spend more than five minutes at any event where Hog riders congregate and you will surely find at least one person with the bar and shield permanently emblazoned on some part of their body with ink. That is commitment. Great power brings great responsibility however, and deviating from their distinct heritage to attract new audiences could have the potential to alienate this faithful following that has been 111 years in the making. This is particularly important when it comes to the Street Glide, Harley’s perennial bestseller.

Named Project Rushmore, the full lineup of 2014 model year touring bikes received significant refinements, contributing to the largest scale new model launch in the company’s tumultuous history. At first glance the casual riding enthusiast may not even detect that anything has changed from last year but the 2014 Harley-Davidson Street Glide is a drastically different motorcycle than its predecessor, in a good way. Each bike received more than 100 updates, some more significant than others, such as the new high-output version of the Twin Cam 103 powerplant, which received liquid-cooling on the heavier models, but not on the Street Glide. All models benefit from a new airbox that increases intake airflow and a new cam that optimizes phase and duration, resulting in better low-end torque and improved passing in the top gears. 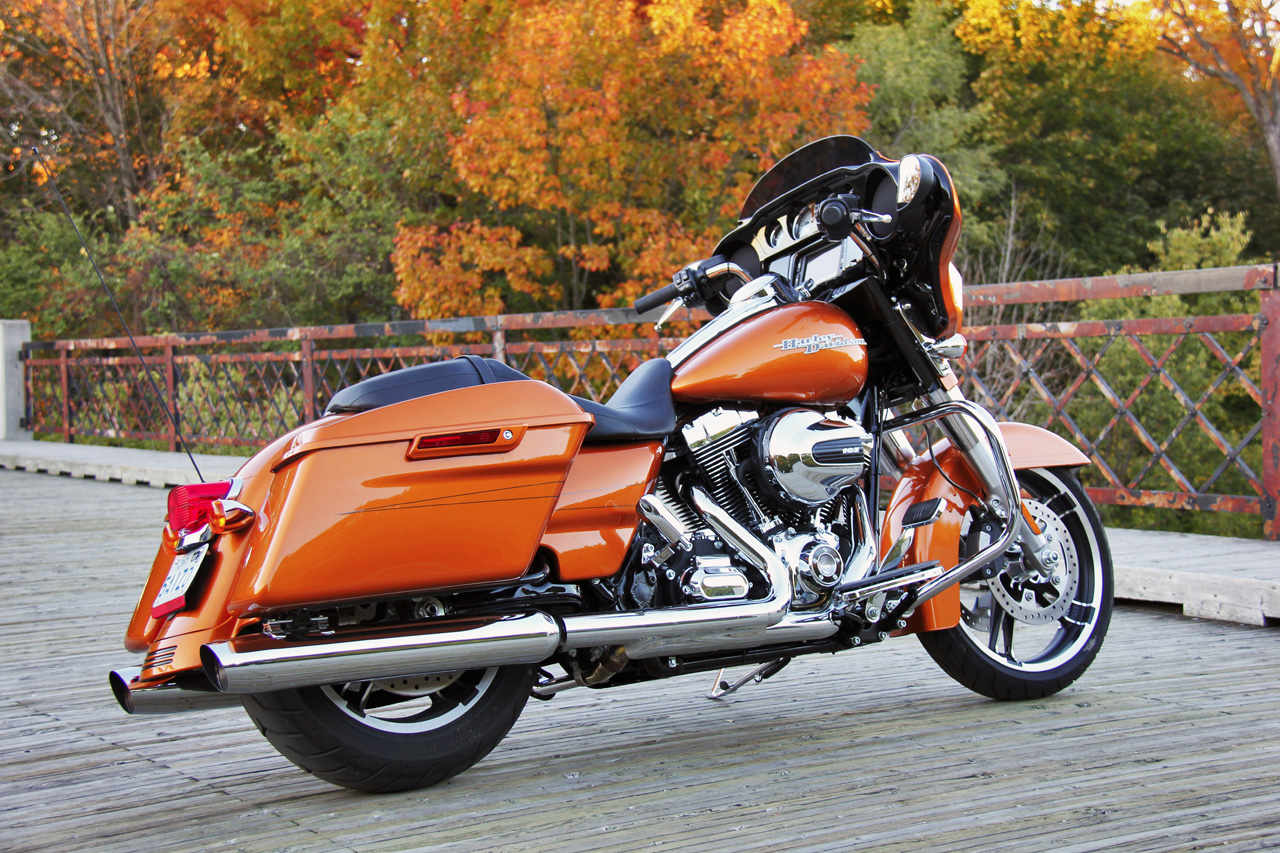 It is no surprise to anyone that there were shortcomings to previous models that were growing long in the tooth. Owners have lamented for years how engines would overheat in stop-and-go traffic while saddlebags were cumbersome and frustrating to use. Competitors were also quickly eclipsing the bar and shield with touring bikes that boasted improved fit and finish, increased efficiency, better ergonomics and updated technology. These issues and others have all been addressed, while thankfully still managing to stay true to the purity of the brand – no simple feat.

Encapsulating over 2,400 new part numbers over eight models, customers, employees and dealers were sourced for input on updates that include infotainment, aerodynamics and ergonomics. “Project Rushmore has been touched by thousands of people, most of them being our customers and our employees,” said Scott Habegger, Harley-Davidson Director of Motorcycle Planning.

So why Rushmore? Chief Marketing Officer of Harley-Davidson Motor Company Mark-Hans Richer explained where the name was derived from. “Rush is a dynamic word used to describe an emotional state. More, well, we’ve added a lot more, and Mount Rushmore is a dream ride for a lot of riders.” 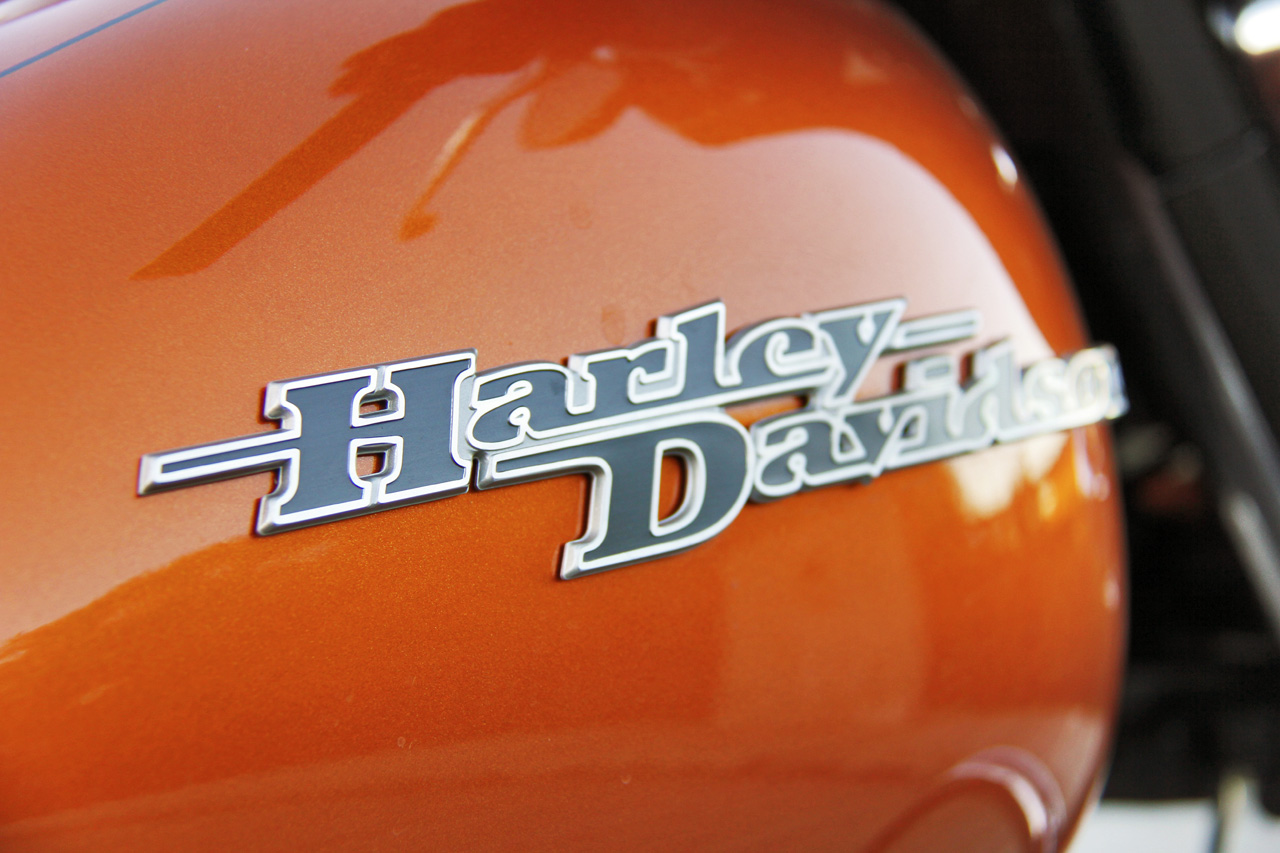 I first witnessed the changes to the 2014 Rushmore lineup at the Harley-Davidson Museum in Milwaukee during the 110th birthday celebrations last summer. Marine First Sgt. Timothy La Sage was given the enviable task of unveiling a 2014 Street Glide to thousands of onlookers as the countdown clock approached the zero hour. Delivering what has become known as “The Freedom Jacket,” he donned the iconic black leather riding attire that was worn by numerous riders around the globe for the last year to celebrate the 110-year milestone.

I then had the opportunity to experience the Street Glide Special firsthand for a few days a little closer to home. Outfitted in Vivid Black, the Special edition rings in at the register for $25,669 but if you opt for a splash of colour like the Amber Whiskey livery of my tester, the balance owing to your friendly neighbourhood Harley dealer will be $26,249 plus applicable taxes and freight.

Styling updates are more evolutionary than revolutionary but are complemented by dual halogen headlamps, Enforcer cast aluminum wheels, a low-profile front fender and restyled Tour-Pak saddlebags with one-touch latch that are long overdue and shockingly easy to use. Most of the changes won’t immediately jump out at you but instead slowly make themselves known the more time you spend getting familiar. It was easy to adapt to the new hand controls because while they may be different, they are also intuitive. 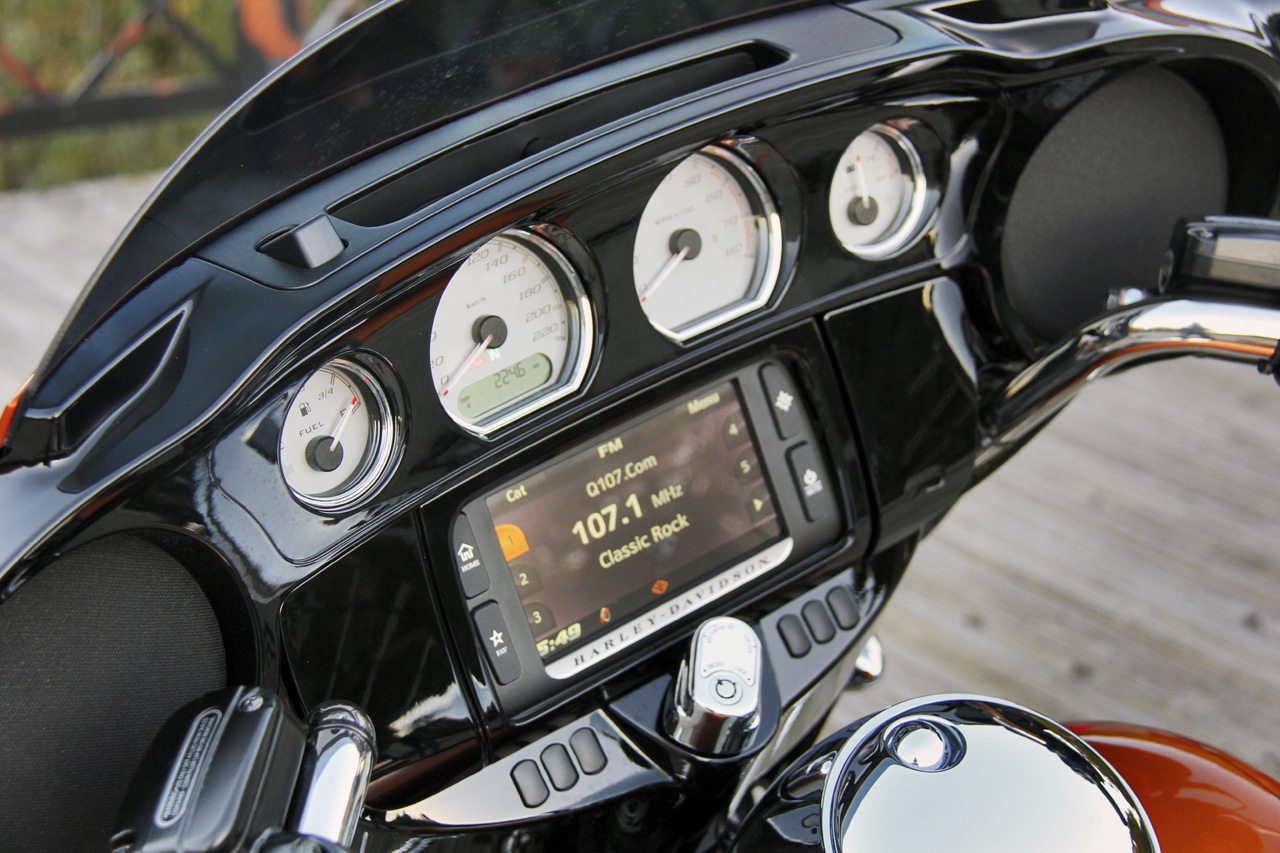 Firing up the new twin-cam 103 awoke a familiar sounding beast as it settled into its trademark idle, albeit with less rattling or commotion. Engagement of the hydraulic clutch is smooth, concise and consistent but does give your left hand a workout in slow city traffic conditions. Thankfully I wasn’t confronted with a situation where the capabilities of the Reflex linked brakes with ABS were truly tested but the system did feel less obtrusive than other linked systems I have experienced. Splitting my time between highway and city riding, the chassis felt more stable and braking predictable due to stiffer springs and Brembo four-piston callipers with dual rotors up front.

The infotainment system features the first OEM voice recognition and touchscreen capabilities in motorcycling that integrate music, GPS navigation and various forms of communication. I normally only listen to music at low speeds or on excessively long trips but on my inaugural excursion aboard the Street Glide Special, I had to experience the new Boom! Box infotainment system, which can easily be paired to your MP3 player or phone. Not only was the quality of the sound far better than its predecessor but thanks to the improved aerodynamics of the legendary Batwing fairing with splitstream vent, I could actually hear the music at highway speeds set on normal volume. Wind buffeting is said to be improved by 20 percent but results will vary from rider to rider based on where your helmet is situated. My biggest gripe regarding the previous model was that the modulation would consistently give me a headache on long rides but I definitely noticed an improvement for 2014. It is a relatively small change that makes a world of difference.

The new infotainment system also incorporates Bluetooth connectivity, text-to-speech technology and intercom communication in one module. Combined with ten percent larger gauges featuring new graphics, the cockpit is cleaner and will be less cluttered with aftermarket GPS units, phones and communication devices. It may take a while to become acclimatized to menus, but once a rider learns to prioritize their own preferences, you’re off to the races. While the screen does feature touchscreen technology that was helpful when stopped, I preferred to use the handlebar-mounted joysticks while in motion so I could keep my hands on the grips and attention on the road.

Part of the crowd-sourcing and research process involved actual Harley-Davidson employees riding two-up with each other to get an appreciation for how the other half lives. Word has it that there was a camera ban on said events but I’m sure many would pay good money to see such hilarity in action. The result, however, is more comfortable accommodations for both rider and passenger which became evident on my longer rides.

The Street Glide is consistently Harley’s best selling model and the Special designation throws in several additional features like a gloss black inner fairing, colour-matched fairing skirt, adjustable low rear shocks and standard ABS. The result is a tighter, more comfortable and intuitive touring bike that has evolved into a more thought out and sophisticated entity without losing the essence of what riders loved. It pulls harder, stops faster and is an all-round easier bike to live with.

About Dustin Woods
Fascinated by anything with an engine since he was old enough to walk, Dustin has been crafting automotive news, reviews, and travel content for over 14 years. He holds an Honours Bachelor of Arts in Communications Studies and English from Wilfrid Laurier University and a post-graduate certificate in Broadcasting from Humber College. Dustin is the Associate Editor of autoTRADER.ca, a member of the Automobile Journalists Association of Canada (AJAC), and a doting cat dad.
Follow me
AdChoices
Latest Articles