For 2020, the BMW X1 has undergone a refresh to better align it with the rest of BMW’s lineup in terms of styling, as well as add some new colours, interior features, and running gear. Luckily, none of that has affected the X1’s wagon-like profile and it remains a handsome yet youthful-looking vehicle.

The Misano Blue Metallic paintwork seen here is one of the new colours introduced alongside Jucaro Beige and Storm Bay Metallic – another shade of blue. It’s a really sharp colour choice that drew many comments during my time with the X1, and it does well to recall the pastel-like Yas Marina Blue BMW offers on performance models like the M4 and M3.

Other additions for 2020 include an enlarged kidney grille to better align the X1 with its larger siblings, though it’s nowhere near as monstrous as what’s offered on the X5 and X7. It does, however, improve airflow to the engine. The LED headlights on either side of it are also new, and while they share the hexagonal inner bulbs with other X models from BMW, they don’t have the option of converting to the brand’s laser light technology.

The new headlamp lenses are matched with new taillight lenses around back, their most distinguishing feature being the L-shaped light bars that add a cool 3D-effect to the rear fascia. The twin tailpipes have also grown in diameter, from 70 mm to 90 mm. Their chrome finish gives them a very M-like look and contributes once again to the X1’s youthful vibe.

That sunroof is quite large and adds an airiness that’s welcomed – especially with dark interior materials like those found in my tester. The X1 doesn’t get the digital gauge display or 12.3-inch infotainment display that other Bimmers get, as it’s equipped with the previous-generation interface.

Sticking with the older interface is something of a shame, with the modifiable gauge cluster and tiled infotainment display that make up iDrive 7.0 both excellent in execution. The system in the X1 requires a little more scrolling with the centralized control wheel than the new version, which gets a little tedious after a while. It is, however, intuitive enough once you get the hang of it.

I did like my tester’s optional 12-speaker, 360-watt Harman Kardon audio system, with rich and vibrant sound quality helping mask the buzzy engine and extra road noise generated by the winter tires.

As is the case in BMWs of most sizes, the front seats in the X1 are very good. I even like the larger side bolsters my tester’s seats had – something that’s not always the case thanks to my wide hips. The fit here was just right, though, and the rest followed suit; a steering wheel that falls nicely to hand, the centre stack that’s angled ever so slightly towards the driver’s seat, and the good outward view.

The cabin isn’t super roomy, though, and I did strike the centre console with my knee as I stepped inside on more than one occasion. The rear seats don’t offer much more space than those in the 3 Series sedan; there’s only about 100 mm of additional legroom and 60 mm more headroom back there, which is not astronomical by any stretch of the imagination.

I also took issue with the climate control system. Sure, it was great to have heated seats and a heated steering wheel, but the automatic climate control system just took so long to heat up. So what does one so in these situations? Well, you might turn the heat up, which is fine, but before you know it you’re sweating. I had trouble modulating the system during my time with the car on a particularly cold week in Vancouver. Once I got the settings right, however, I found the system does a nice job of making sure that the airflow is somewhat centralized, so you don’t have massive blasts of air being directed at three square inches of your forearm.

Only one engine is available in Canada – a turbocharged 2.0L four-cylinder that’s good for 228 hp and 268 lb-ft of torque. That output is fed to all four wheels through a newly tuned eight-speed automatic transmission. That horsepower count may not look like much on paper, but the torque is generous enough to ensure that forward progress is swift. Surprisingly so, actually.

It may look a bit more like a wagon, but it’s classified as a crossover and that, at least subconsciously, affected how I imagined it would feel when I drove it. I guess I was expecting something just a little more truck-like and less athletic than the 3 Series. Maybe that would be the case if driven back-to-back with BMW’s popular sedan, but I can’t say I took much issue with it and the way the X1 drives should be more than enough for most drivers.

Throttle response is quick, turbo-lag is minimal, and while I do have some quibbles with the transmission, the way it responds to throttle inputs is not one of them, even in full auto mode. If you want a little more driver involvement you can make use of the optional wheel-mounted paddles and do the gear changes yourself – and with this powertrain you’ll want to.

Any complaints about the drivetrain mainly revolve around the way the transmission acts at low speeds around town. The main issue is the X1’s propensity to roll back on even the slightest of inclines as you release the brake. You don’t feel it so much at first, but it becomes tiresome after a while. Add the auto-stop/start system that doesn’t exactly provide the smoothest transitions from stationary to rolling (I spent most of the time with this feature off, achieved by pressing a button mounted to the left of the engine on/off button), and you’ve got a family vehicle that requires extra attention when tackling the daily grind.

Surprise of the year incoming: The X1 rides and handles like an absolute champ, as most BMWs tend to. There are three driving modes to choose from, with the performance-oriented Sport adding some nice, weighty steering to the experience. Yes, I would like to feel the road a little more through the thick-rimmed wheel, but that’s a tough ask with electrically assisted steering racks so I won’t dwell on that too much here.

I’d rather be talking about how well the X1 responds to left-right-left transitions, how quick the nose is to respond to your steering inputs and how the well-tuned dampers and springs keep everything in check, and body roll to a minimum. Again, a crossover though it may be, you wouldn’t know it from behind the wheel.

Of course, that means this likely isn’t a crossover you want to spend too much time off-roading in. I didn’t get a chance to put it through its paces on a properly rough road, but my guess is most X1 owners won’t tackle much worse than the snowy roads to the ski resort, and this should do just fine in those circumstances.

My favourite feature on this front is the 40/20/40-split folding rear seat; if you want to fit skis inside but still need room for a pair of passengers in the back, the centre folding portion is just the ticket.

Also helping in the cargo-loading department (other than the low liftover height thanks to the X1’s wagon-like proportions) is the massive storage compartment that extend pretty much the length of the cargo area. It’s great for wet/dirty items, or if you want to hide more valuable fare. There’s also a retractable cargo cover for the main compartment, and while I managed to fit two full-size hockey bags in the back with the cover installed, I’d probably remove it for family road trips.

While it’s nice the X1 comes standard with all those advanced safety features mentioned earlier, I’m not sure how I feel about having to navigate through the infotainment display in order to activate and deactivate them. To do so, you first hit a button mounted in the middle of the centre stack, which brings up a menu that you can then scroll through for lane-keep assist, blind-spot warning, and so on. It’s easy enough to use at that point, but sometimes I want a button I can press – they’re often mounted by the driver’s left knee – to toggle each system individually.

The rear-view camera, meanwhile, is clear – I only wish the image displayed was a little larger. It only covers half the available space on the main infotainment display, with the other half taken up by a mostly black screen with an overhead image of the vehicle and its surroundings. It’s there to show you how close you’re getting to various objects, which is nice. Too bad the audible alerts are so easily triggered; quite often, I’d be clearing the pillar in my parkade by a solid six inches only to have the system yelling at me as if the apocalypse had arrived. You can turn the audible alerts off with the press of a button, but then the camera is turned off, too. The only way to get around this is to manually adjust the volume of warning tones, which is a little frustrating.

All told, my tester came in at $50,600 before taxes. Now, BMW is a luxury brand, so the cost is somewhat understandable, but the X1 is the brand’s entry-level crossover. You can save yourself almost $6,000 by foregoing the Premium Package my tester features. That means no sunroof, adaptive LED headlights, sport seats with lumbar support, head-up display, and Harman Kardon stereo, among other items, so skipping the package depends on how important such items are to you.

I think I’d be perfectly fine without all the extras, if I’m honest. Yes, the interior is a little dark without the sunroof, but opting for a lighter upholstery colour would help. Other than that, I’m a big fan of how practical the X1 is, that it drives much more like a car than a crossover, and I think the new styling touches work well. You can certainly do worse for around $40,000. 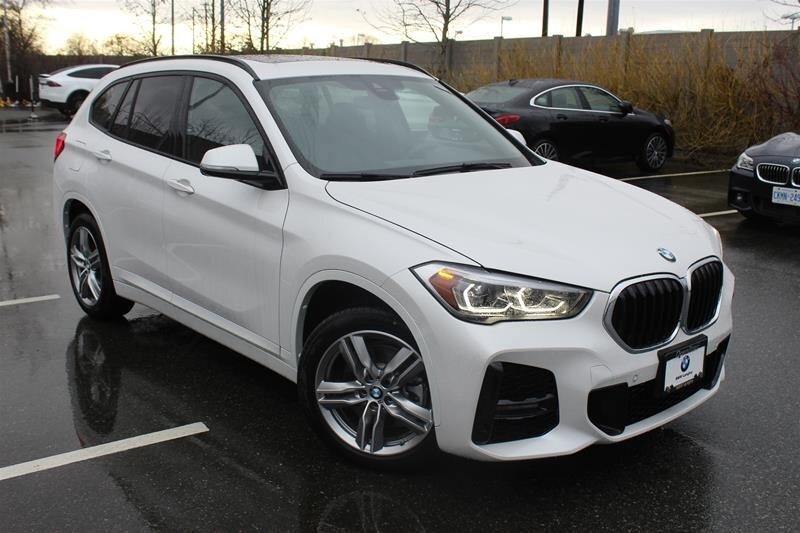