The 2020 Kia Forte5 GT might not quite have the performance chops to keep up with the likes of the Volkswagen Golf GTI, but it does manage to carve out its own unique space among sporty hatchbacks. What it lacks in outright performance, the hotted-up version of the Forte hatch makes up for as a stylish, functional, and affordable little runabout.

After a yearlong hiatus – and one year removed from the rollout of the redesigned sedan – the five-door Forte is back and it looks better than ever. Heck, it looks better than just about any other hatchback on the market. With a sleek shape that’s more sportback than boxy hatch, the 2020 Forte5 is a genuine looker.

The flowing form of this third-generation Forte hatch is only enhanced by the rich metallic colours offered, including the orange hue seen here. Turbocharged GT models take the standout styling a step further by adding contrasting accents – there are subtle bits of red in the grille to go along with gloss black mirror caps and bumper treatments – and 18-inch multi-spoke wheels that combine to give it some real road presence.

Red accents carry into the cabin, with piping and stitching on the seats and steering wheel, though a bit more red on the dash or door panels would certainly help the Forte5 GT make a statement to those strapped inside. Swapping the silver trim that spans the dash, for example, would add some visual excitement without overwhelming occupants. (The GT badge on the dash glows red, as do inserts in the front door panels, though it’s all subtle enough to go virtually unnoticed.)

Of course, there’s more to the Forte5 GT than its styling, and its powertrain is smooth and strong. As the (mostly) mechanical twin to the Hyundai Elantra GT N Line, power comes from a turbocharged 1.6L four-cylinder. The caveat is that, unlike the Hyundai hatch, the Forte5 GT isn’t offered with a manual transmission. That leaves a seven-speed dual-clutch automatic as the only gearbox available, though it does a reasonable job of directing usable torque to the front wheels in a hurry.

There’s 201 hp and 195 lb-ft of torque to work with, the latter of which kicks in at just 1,500 rpm. While the transmission is prone to shuddering at low engine speeds – particularly during slow rolling starts – enthusiastic pedal play is met with a surge of acceleration, the seven-speed shifting smoothly higher in the rev range. The pseudo-sport compact may not take off quite as quickly as the Volkswagen GTI, though few will notice the second or so the Forte5 GT gives up to that hot hatch in the sprint to 100 km/h.

Driving dynamics have never been Kia’s forte (sorry not sorry), though the tide is turning for the brand built on value – and it’s turning rather quickly. Both sedan and hatchback versions of the third-gen Forte boast vastly improved ride and handling characteristics, though the GT versions take them a step further with a multi-link rear suspension and sporty suspension tuning at all four corners. The resulting ride is just firm enough to keep the car flat through corners while remaining compliant enough to call it comfortable.

Like the Forte GT sedan that came before it, this hatchback leans toward a sporty drive without being hellbent on the concept. The electric power steering is communicative if slightly sterile, feeling as direct as such a system can. A selectable sport mode adds artificial weight to the steering – and amplifies throttle response – for enhanced engagement, though the extra resistance does nothing to hinder the forgiveness that’s built into the way the sporty hatchback handles. There’s plenty of room to play before the car starts to understeer, with quick turn-in response and little body roll.

Paddle shifters fitted to the steering wheel provide welcome engagement, with upshifts accompanied by a subtle brap from the twin exhaust and downshifts joined by steady engine braking. Toss the Forte5 GT into a corner and it performs admirably, carving a tight line and offering a meaty torque curve to work with.

While there’s a hint of slop in the suspension, it allows the Forte5 GT to roll over road imperfections without much fuss. Despite the 18-inch wheels and low-profile tires it rides on, little reverberates through the car when cruising around town or out on the highway. It’s not the quietest compact on the market, however, and plenty of road and engine noise permeates the stylish cabin. Responsive though the motor may be, it’s buzzy at the best of times, clattering away like a sewing machine under even moderate acceleration.

The front sport seats are comfortable and supportive, and they come heated and ventilated in the loaded GT Limited trim (heated front seats are standard in the base GT model). Springing for the kitted-out Forte5 cloaks those same seats in a synthetic leather upholstery that’s not especially supple, though the heated flat-bottom steering wheel is wrapped in genuine cowhide.

Dual-zone automatic climate control comes standard, as does steering wheel heat, while the loaded version adds two-stage heat to the back seats. Console-mounted HVAC vents are also there to keep rear-seat occupants comfortable, cranking out a steady stream of air when the system is turned on.

Equipment ranges from good to great, depending on trim. LED lights all around, a sunroof, heated mirrors, and 18-inch alloy wheels come standard, as does an eight-inch touchscreen with Apple CarPlay and Android Auto, satellite radio, a wireless phone charger, and push-button start.

With Kia opting to sell only the sedan in the United States, the Forte5 has not been tested by the Insurance Institute for Highway Safety (IIHS). The not-for-profit did, however, award the 2020 Forte sedan with a Top Safety Pick rating. The equivalent Forte model sold in Europe – known as the Kia ProCeed – received a five-star rating in the European New Car Assessment Programme (Euro NCAP).

Few automakers lay out their cabins and controls quite like Kia, with a simplicity that’s hard to match. Switchgear is clearly labelled and falls readily to hand, with a sensible order to its placement. Front seat climate, heated steering wheel, and drive mode buttons surround the gear selector, while HVAC controls are located just above it. Large buttons and a digital display screen are flanked by large knobs for temperature control – basic, yes, but sensibly so.

Sitting atop the dash is an eight-inch infotainment display that remains one of the most fantastically simple systems on the market. What it lacks in frills and flair it makes up for with outstanding approachability, using basic icons for various apps, and buttons and knobs beneath it for simple audio controls. Plugging a smartphone into the USB port located in the cubby directly in front of the gear selector quickly pulls up either iOS or Android interface, while steering wheel controls offer quick access to phone and audio content, as well as cruise control.

Despite its sportback shape and the shallow slope to the rear window, the Forte5 remains a practical five-door with generous cargo-carrying abilities. With 741 L behind the back seats, the Forte is competitive for the class. While its ability to carry taller items is hindered slightly, the cargo hold is wide enough to carry large items without the need to get creative. Folding the rear seats flat yields 1,335 L – again, in line with the top of the class.

There’s enough storage elsewhere in the cabin for smaller items, while room for occupants is more than adequate. Front seat headroom is penalized by the sunroof that comes standard on Forte5 GT models, though there’s enough space for average-sized users to get comfortable. That’s true of the rear seats, too, with room for a pair of adults to fit comfortably.

What this car lacks in outright performance it makes up for with price. The cheapest version starts at $27,395 before freight and fees, while the loaded GT Limited is priced at $29,995. That’s cheap no matter which lens it’s viewed through, but especially when it’s compared to a car like the GTI. Make no mistake, the GTI offers a lot for the money, but those on the fence about spending the kind of cash it takes to get behind the wheel of that VW will find most of what they’re looking for here – and save a few bucks along the way.

The cheapest GTI carries a sticker price of $30,845 before tax – $32,245 when the seven-speed automatic is optioned. The loaded version, meanwhile, is a $36,745 pill to swallow, and that climbs to $38,145 with the automatic gearbox. Then there’s the Elantra GT N Line, which starts at $27,249 with a six-speed manual transmission or $28,749 with the same seven-speed auto in the Forte5 GT. The loaded Elantra N Line hatch only comes equipped with an automatic and carries a sticker price of $30,749.

So the Kia Forte5 GT isn’t quite the hot hatch the Volkswagen GTI is, but it’s a great car to drive and comes packed with all kinds of great features and technology. Disappointing though the lack of a manual transmission may be, the Forte5 GT is a sporty, stylish, and practical hatchback that delivers an awful lot of bang for the buck. 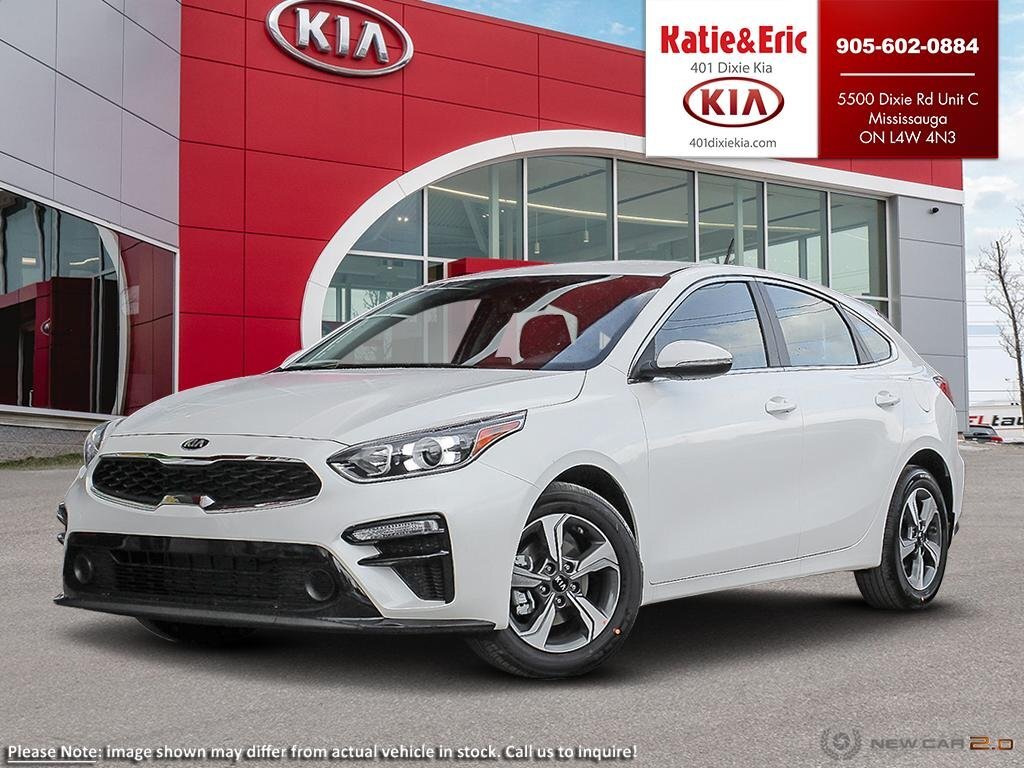