Between low fuel prices and gas-powered cars becoming more efficient than ever before, it seems the emphasis on hybrids isn’t what it once was.

But the technology driving these gas/electric automobiles cars is better – and cheaper – than ever before. That newfound affordability has paved the way for the all-new 2020 Toyota Corolla Hybrid, an ultra-efficient take on the quintessential economy car. It’s also the perfect foil for the 2020 Honda Insight.

The Toyota Corolla augments its 1.8L four-cylinder gas engine with a small electric motor and a nickel–metal-hydride battery – a curious choice since so many other electrified automobiles have switched to lithium-ion, including Toyota’s own Prius.

The powertrain has a combined output of 121 hp, and is paired with a continuously variable transmission (CVT). It’s not as limp as it sounds, with a good spurt of torque off the line. Better yet, the powertrain warms up quickly so it can operate at peak efficiency. That means it will turn off the gas motor quickly, allowing the car to operate on just its battery and electric motor sooner and more often, keeping fuel consumption to a minimum.

The Honda Insight packs a smaller engine – a 1.5L four-cylinder – but pairs that with a lithium-ion battery, and offers a combined output of 151 hp. Like the Corolla, it also features a CVT, but despite the advanced battery tech and more combined horsepower, the Insight’s powerplant never feels stronger than the Corolla’s. Balance and refinement are important, and during our testing, the Insight was a bit hesitant to turn off its gas motor and rely on the battery and electric motor alone. Often when trying to use the electric-only mode, the car warned that it couldn’t operate in this manner due to the temperature or climate control settings. It seemed like there were a few too many obstacles in the way of the hybrid powertrain operating at its peak.

When Toyota moved the Corolla to a new architecture – one that’s used by a wide selection of its lineup – it gave the compact car a whole new personality. It’s now surprisingly agile, fun to drive, and responsive, traits that weren’t common in past Corollas. While the hybrid is a bit heavier than the conventional version, it still manages to feel enjoyable on the road.

Due to the electrified powertrain, there’s a significant thrust of torque off the line, meshing well with the car’s responsive steering. It’s not overly communicative, as the steering can feel a bit numb, but the chassis provides enough feedback to ensure it never feels vague. One criticism is the brakes, which can sometimes feel a bit inconsistent. Some applications of the pedal saw firm, almost sudden braking, while others were more gradual. It could be a bit more refined, or perhaps there’s just a steeper learning curve associated with it.

The Civic-based Insight should be a dream to drive considering how much fun the popular compact can be. However, the peppy personality of the Civic is missing here, and the Insight offers a very different experience. To call it bland may seem a bit harsh, but the Insight drives without the punchiness experienced in the turbocharged Civic.

Despite the advantages of a torquey electric motor, the Insight feels somewhat understated and conventional, which might be its goal. Like the Corolla, the Insight has numb steering, but unlike the Toyota, even the chassis and suspension feel vague and soft. While the two cars have the same wheelbase and are roughly the same weight and length, the Insight feels more sturdy and substantial. One significant concern is how noisy and unpleasant the cabin can get when the combustion motor kicks in for extra acceleration. The 1.5L is buzzy and the CVT ramps up the revs to a very unexpected volume, leaving the typically peaceful cabin feeling less serene.

The Toyota Corolla Hybrid is rated by Natural Resources Canada (NRCan) at 4.4 L/100 km in city driving conditions, 4.5 L/100 km during highway drives, and 4.5 L/100 km combined. Our experience on a route that had a good mix of both highway and urban traffic saw an incredible 3.9 L/100 km combined, far surpassing the best of the Insight.

That came as something of a surprise, as the Insight has solid ratings as well. NRCan pegs it at 4.6 L/100 km in city driving, 5.3 L/100 km on the highway, and 4.9L/100 km combined. Traversing the same route and traffic conditions as the Corolla, it returned 4.7 L/100 km, showing it to be less efficient than the Toyota. When shopping for a hybrid compact car, efficiency is a huge part of the purchase decision, giving the Corolla a slight edge.

Toyota deserves some credit for the way it’s revitalized its styling recently. The Corolla, formerly a car as noticeable as toast at a breakfast buffet, now has some flair with sharp angles, a large grille, and a few attractive angles. The hybrid has a few unique elements as well, including wheels and a spoiler, and the front bumper design is exclusive to hybrid models.

The Insight packs a design that is more or less similar to what we’ve seen with other Honda cars, which is to say it’s not the most attractive car out there. There are harsher lines on the Insight, but high-tech accents, too, such as the LED daytime running lights. The wheels on the Insight are also unique to the nameplate – a wavy two-tone set that seems to be oriented toward improving aerodynamics.

Jump inside the Corolla, and it leaves a somewhat positive first impression. The layout is easy to get accustomed to and the light leather-like upholstery is attractive, feeling like the Corolla is reaching towards a higher tier of vehicles. However, after a bit more time in the Toyota, a few of its less attractive points make themselves known. The seats aren’t as comfortable as the ones in the Insight, and there are a few conspicuous hard plastics, which ruin the upscale vibe that the Corolla is gunning for. The rear seats are also significantly less spacious than the Insight’s.

The Insight’s interior feels a bit more cohesive. The all-black design leaves a cold impression and there are a few hard plastics found around the cabin, but the Insight is more practical and spacious. Those hard plastics are in spots where they’ll be touched – or kicked – often, meaning they may get scuffed or worn out quickly. However, the Insight is more practical with more cargo room.

Toyota and Honda are both on board with offering a lot of equipment in their small cars. The Corolla Hybrid has plenty of high-end options, including a heated steering wheel, heated seats in the front and back, and a wireless phone charger. A downside to the experience is an infotainment system that is really unattractive and slow, and only offers Apple CarPlay support. There’s no navigation either, forcing users to rely on smartphone integration. The Corolla also features a nice and easy-to-read digital screen in the gauge cluster, but it pales in comparison to the setup the Insight has.

The Honda Insight has a really well integrated digital gauge cluster that provides lots of information in an easy-to-read way. The infotainment screen, on the other hand, is less intuitive, feeling slow, lacking direction, and coming across as out of touch with modern systems in other cars. Fortunately, it offers a navigation system, and there is Android Auto and Apple CarPlay support. Like the Corolla, the Insight also offers four heated seats, as well as dual-zone climate control. It doesn’t, however, have a heated steering wheel or wireless phone charger.

Despite their size, both of these cars offer a lot of equipment that keep drivers in their lane, and prevent frontal collisions. The Corolla Hybrid comes standard with forward collision warning, automatic high-beams, lane-departure warning, and adaptive cruise control in addition to blind-spot monitoring.

The Honda Insight has many of these features as well, but they’re not all exactly the same. For example, the adaptive cruise control in the Insight isn’t a full-speed system, and won’t bring the car to a stop. There’s no blind-spot monitoring in the Insight, but rather a camera-based system that displays a video feed of what’s happening on the passenger side of the vehicle. The Insight has lane-keep assist and a forward collision warning system that is on par with the Corolla.

The Corolla Hybrid starts at $24,790, and offers just a $2,000 Premium Package which includes the heated steering wheel, wireless phone charger, and heated rear seats, among others. Add in freight and fees, and it’ll set you back $28,560 before tax.

These two compact hybrids offer very different experiences. The Insight is an excellent car, with plenty of space and technology, but it’s inferior to the Corolla in one important area: the powertrain. The Corolla Hybrid offers a more refined and efficient combination of gas-powered and electric motors. Not only that, but it’s more affordable without much compromise. While the Insight is an excellent car, it’s just an average hybrid. The Corolla Hybrid, meanwhile, delivers an affordable, extremely efficient, and refined ride that’s decked out with lots of equipment. 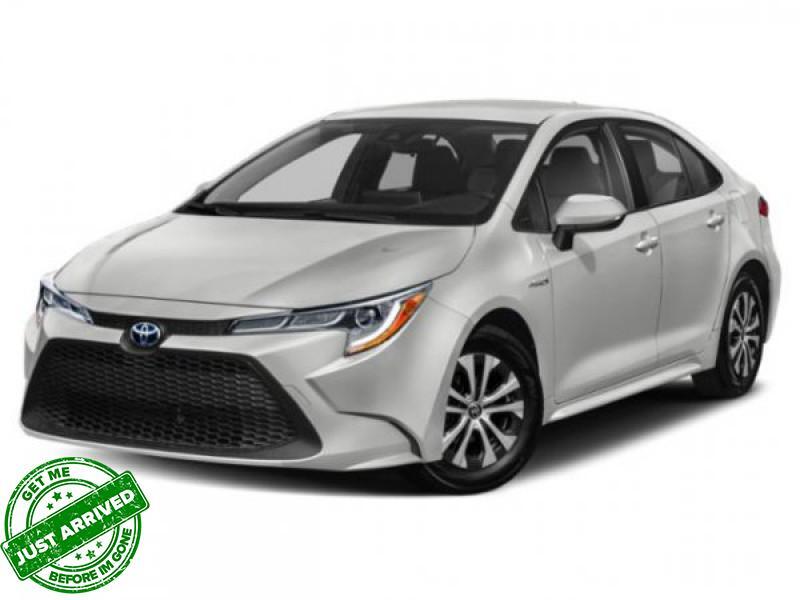