When it debuted, the Chevrolet Bolt EV was revolutionary, providing long-range, practical, and emissions-free motoring at a reasonable cost. It arrived with much hype but hasn’t been able to maintain its momentum as other new electric vehicles, including the Hyundai Kona Electric, arrived with bigger batteries, more range, and a similar price. The Kona Electric is the new EV darling on the block, and green drivers will likely be considering one of these before buying a gas-free vehicle.

The Kona Electric is based on a subcompact crossover, so it looks like a mix of a hatchback and an SUV. You’ve probably seen many Konas on the road already, so the EV version will look familiar. The front end sports a different design, however, as the EV doesn’t need the grille found on the internal combustion engine (ICE) model. The charge port is hidden in the nose, which can make it difficult to charge when you back into a spot. The slim headlights and taillights give the Kona a futuristic look, while the black body cladding makes the vehicle appear more rugged.

The interior is well-sorted and the centre console provides some extra storage. The Kona Electric uses a mix of materials that helps hide the hard plastics, and the availability of light-coloured upholstery is a nice touch. The layout makes sense and the controls are placed within easy reach. The user-friendliness is a highlight of the cabin and all the buttons are labelled clearly and do exactly what you expect them to.

The pod-like Bolt EV is less stylish, although our bright blue example was certainly a head-turner. The upright design leads to a more practical vehicle and it looks like a bigger Honda Fit, which isn’t a bad car to mimic. It looks far less futuristic than the Kona, but it still stands out as being different.

There’s an airy feel in the Chevy, with plenty of headroom and excellent visibility because of the big windows. There is a lot of plastic in the interior, however, especially the dashboard and trim. The plastics don’t give a great vibe and there are no pretensions of being premium or high-end in the Bolt EV. Controls are kept to a minimum. Features like heated seats are activated through the touchscreen, which can be a bit distracting while on the move.

Although the Insurance Institute for Highway Safety (IIHS) has given the Chevrolet Bolt EV a Top Safety Pick award, many crash avoidance features aren’t included as standard equipment. However, Chevrolet does outfit every new car with its OnStar telematics suite, so if you need some help on the road, it’s easily accessible. Features such as automatic emergency braking, pedestrian detection, follow distance indicator, blind-spot monitoring, and lane-keep assistance are available as optional extras.

The Kona Electric gets lane-keep assistance and forward collision avoidance as standard equipment. We were fortunate enough to test an Ultimate trim model, which included blind-spot monitoring, lane-change assistance, rear cross-traffic alert, parking sensors, pedestrian detection, driver attention warning, and a high-beam assist feature. While the IIHS hasn’t tested the Kona EV, it has tested the conventional gas-powered model and awarded it with a Top Safety Pick rating.

Cargo space in the Bolt EV measures in at 479 litres, which is a tiny bit below the Kona’s offering of 544 L. However, when you fold the rear seats of the Chevy, there are a total 1,603 L, which is a good chunk more than the Hyundai, which has 1,296 L. It’s a bit roomier in the Bolt EV as well, with 2,673 L of passenger space, compared to the 2,618 L in the Kona. The extra headroom and additional rear passenger space are very noticeable in the Bolt EV and taller riders will really appreciate that. Don’t knock the Kona Electric though, as it has more in-cabin storage cubbies.

If you want a vehicle that is easy to get in and drive, the Bolt EV satisfies. Everything is straightforward, requiring minimal setup. There are a few too many controls buried within the touchscreen and the infotainment system isn’t as intuitive as the Kona, but it’s bright and easy to read. The green driving coaches in the Bolt EV are average and have you balance a ball in a bar to represent power and efficiency. However, one important thing about the Bolt EV is that it isn’t very customizable. There are fewer drive modes and settings for the powertrain, which may annoy green enthusiasts.

In this regard, the Kona Electric impresses. There are controls for everything and a lot can be customized, including drive modes and battery regeneration efforts. After spending time with EVs, you will likely find yourself wanting more granular control over the experience, and the Kona Electric delivers this. The infotainment system has physical buttons for both media and HVAC settings, which help keep drivers from getting distracted by using the touchscreen.

Both vehicles offer heated seats, heated steering wheels, and automatic climate control. The Kona Electric offers ventilated seats, a sunroof, and a head-up display, while the Bolt EV offers heated rear seats. It’s not much to get excited about, and we did pine for adaptive cruise control in the Bolt EV. Furthermore, the Kona Electric has a great driving coach that tells you how much extra mileage you get each time you apply the regenerative brakes. Both vehicles feature Android Auto and Apple CarPlay and offer wireless phone charging for extra convenience.

The electric motor in the Bolt EV has an output of 200 horsepower and 266 pound-feet of torque. It feels plenty quick, not far from a hot hatch in terms of response and will hit highway speeds in about 6.5 seconds. It features a sport mode in case you want a more immediate response, but I didn’t find it to be necessary. There’s a single paddle on the steering wheel that will activate regenerative braking on a very aggressive level. It’s not nearly as intuitive or natural as the multiple settings on the Kona Electric, which also has a few more drive modes.

The Hyundai features an electric motor with a modest increase in power and torque over the Bolt EV. With 201 hp and 290 lb-ft of torque, it has a tiny bit more get-up-and-go. As mentioned before, it has a few drive modes that help drivers pick a driving experience to suit their needs better. There are two paddle shifters on the steering wheel that adjust between three levels of regenerative braking for added control. While the two cars feel generally the same in terms of power output, the Kona Electric’s flexibility is a huge asset.

According to Natural Resources Canada (NRCan), the Bolt EV is rated for 417 kilometres of range, which is pretty impressive. This is due to a slight bump in battery size to 66 kWh from 60 kWh in 2020. Real-world mileage will vary significantly based on the features you use, as well as the temperatures and speed you drive at. We saw at most, 380 kilometres of range on a full charge during our time with the vehicle in winter, which isn’t bad, but a decent chunk less than the advertised numbers. It helps that the Bolt EV charges relatively quickly, as a fast charger can get the battery full in just two and a half hours. A 240-volt charger does it in 10 hours, while a 120-volt outlet will take over 50 hours.

The Kona Electric features an advertised range of 415 kilometres and was actually pretty close to that figure during our testing. Hyundai’s battery management definitely has an advantage over the Chevy’s system and provided a more consistent range expectation. A full charge occurs a bit quicker in the Kona, with a Level 2 charger filling the battery in 9 hours and 35 minutes, while a Level 3 charger will take between 75 to 54 minutes to get to 80 per cent.

The Bolt EV feels a bit stiffer but is more responsive in terms of handling on the road, and this impacts the ride comfort significantly. It doesn’t feel too harsh or crashy, but the Kona Electric feels more composed on rougher roads. The Hyundai is more softly sprung, so it has a bit more body roll and can handle uneven pavement more comfortably. A major part of the comfort aspect is the tires, as the Kona Electric’s winter tires featured slightly more sidewall compared to the Bolt EV to sop up any cracks in the pavement or manhole covers.

Responsive and stiffer than the Kona Electric, the Bolt EV is enjoyable to drive and feels far more mainstream than other electric vehicles, some of which can be overwhelming to some drivers with their funky controls and customizations. The Bolt EV is a get-in-and-go kind of car, with many of the controls being similar to a conventional gas-powered car. Although the Bolt EV feels sportier and more engaging, the Kona Electric has its appeal as well. Just like a smartphone or computer, you can customize and tailor the Kona Electric to your liking, which many green drivers like to nerd-out over. The Bolt EV feels far more static in this regard. While both cars feel peppy and exciting, the Kona Electric will appeal to many different types of EV drivers and even those who are new to gas-free driving.

The Bolt EV starts at $46,898, which includes freight and the A/C tax. A loaded Premier trim, with the attractive paint finish, advanced driver features, and all-weather floor mats will set you back $53,958. The Kona Electric is slightly more expensive in both scenarios. It starts at $47,136, while the fully loaded Ultimate models come to $55,186. I think it may be worth the extra price premium for the Kona Electric, which gets a few extra features, more range, and quicker charge time.

While both vehicles feature electric powertrains, affordable price tags, and a range of more than 400 km, they present different experiences. The Bolt EV is an attractive choice for someone who just wants an electric vehicle without getting too invested in the green lifestyle. It’s easy to drive and pretty fun on the road, too. The Kona Electric, with its customizable and modern powertrain, feels like a better choice for a wider variety of drivers, despite its limited size and price premium. 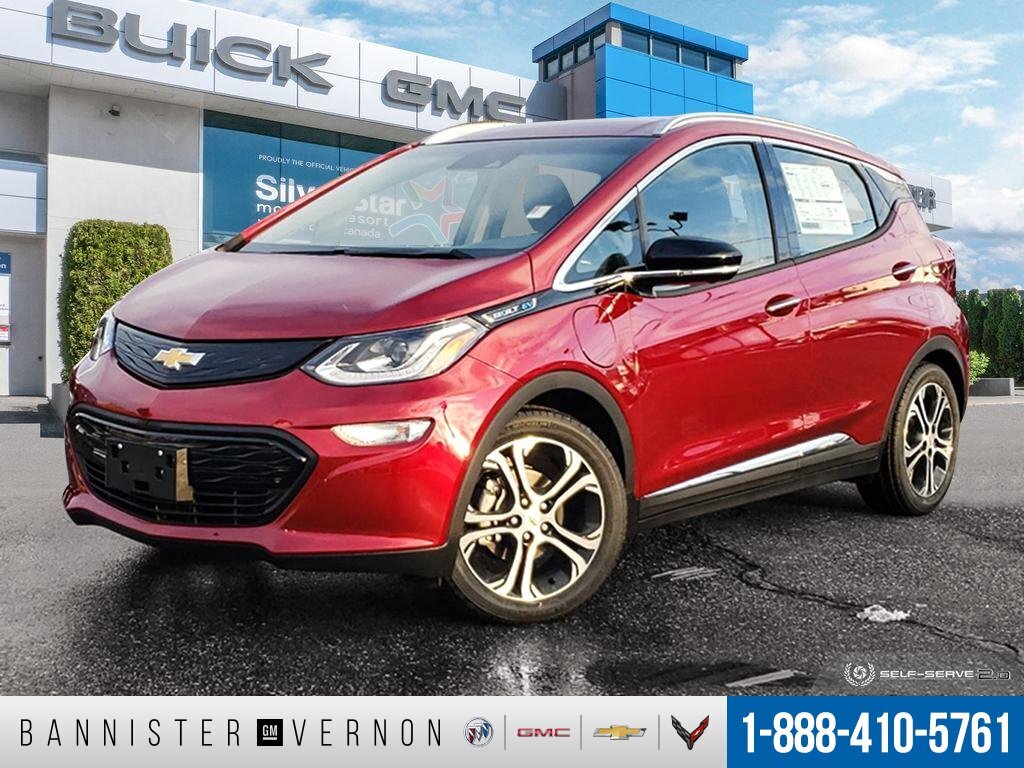