With SUVs continuing their takeover as the family vehicle of choice, the 2020 Chevrolet Traverse provides a useful reminder that perhaps GM’s decision to move away from the super-flexible minivan with the original Traverse way back in 2009 was a prescient one (even if it wasn’t particularly popular at the time).

The lack of sliding side doors leads to more “Watch those doors!” angst for parents in tighter parking lots, though that’s true of any vehicle that’s not a minivan. Still, this Traverse RS model’s standard all-wheel drive, large overall footprint, and tall driving position give this tester especially comforting winter-weather confidence and high-riding heft, while maintaining some important dynamic poise and decent overall fuel efficiency.

My barber loves talking cars, often about the cars and SUVs he prefers: “I don’t like the crossover look, I like the boxier SUV style.” I therefore thought this Traverse’s more traditionally squarish look would be right up his aesthetic alley. He liked it, but was more excited to come out to see it when he thought I had the newer and more modernly styled Blazer. This, perhaps, speaks to shifting auto design tastes.

To these eyes, the Traverse seems conservatively handsome, its imposing size more of a visual marker than the subtly creased bodywork. Compared to its corporate cousins – the Buick Enclave, Cadillac XT6, and GMC Acadia all ride on a similar platform – I’d have to place the Chevy in the front row of that foursome, if perhaps not on pole. It’s also well-positioned against rivals like the Dodge Durango and Ford Explorer, though its black lower body cladding makes its large tire-to-fender gap look even larger.

GM deserves kudos for coming up with its unique centre-mounted airbag, designed to keep the driver from colliding with the vehicle’s central tunnel or adjacent passenger. It’s yet another of the non-mandated airbags the automaker has made standard equipment, along with side and side curtain bags that extend to all three rows.

The RS trim level lands in the middle of the Traverse’s six trims, offering notably more modern active safety equipment, including a blind-spot detection system, forward collision warning, plus automatic emergency braking for both cars and pedestrians at speeds as fast as 80 km/h.

The blind-spot detection system works well, with an audible warning issued when either signal is activated and an object is occupying either blind spot. There’s a more subtle seat vibration if you opt for the Safety Alert seat. A green light on the dash illuminates when the Traverse approaches another vehicle too closely – which happens often in the city – followed by a flashing red light and panicky audible warning if an imminent collision is detected (it happened once during my week with the Traverse).

There’s a physical heft to the Traverse that isn’t quite vault-like, but is reassuring nonetheless. Equally as understated but appreciated, GM’s OnStar telematics service offers stolen vehicle tracking and automatic emergency crash notification, among other services.

Conceived as a minivan replacement, the Traverse has many of the practical niceties of the modern minivan, with the addition of the all-wheel drive that many drivers want for nastier weather. Yes, those sliding rear doors are missing, as are the comfy folding front armrests, but the ease of use starts right upon entry, readily allowing for medium to tall-ish adults to slide in from a standing position.

Its high roof and wide-opening doors help seniors climb in with minimal body folding, which is also helpful for parents who are sore from chasing/carrying kids or back-to-the-gym resolution workouts.

The second-row captain’s seats are also wide and comfortable, with centre armrests and a big walk-through to the third-row seats, as well as one seat that tips forward, even with a child seat strapped in. Unfortunately, the seat that tips is on the passenger side, which makes sense when loading from the curb, but I found myself wishing the handy tipping ability had made it onto both sides.

The third row folds down easily and lies flat, as do the second-row captain’s chairs. But there isn’t the deep well of most modern minivans, nor handy bag hooks to ensure your groceries don’t roll around with every turn.

There’s no doubt that the Traverse provides a high space per dollar quotient – even if not quite so much as the dated Dodge Grand Caravan, the perennial champ in that ring. But for the Chevy’s as-tested price of $53,373, there are also plenty of niceties here, even if the RS is only third highest of the Traverse’s six total trims.

The only options on this tester were the huge dual-panel sunroof ($1,685), which really helped bring a welcome brightness to the dark interior, the special metallic paint ($495), and $95 wheel locks.

No doubt, the favourite option for teenagers sitting in the back was the integrated Wi-Fi, courtesy of the OnStar system. But there are also a few features that are notably missing in the RS, such as wireless charging, ventilated seats, adaptive cruise control, heated rear seats, and a foot-activated tailgate. All of these reside on higher price trims that land closer to the $60,000 mark.

To be fair, not many three-row rivals offer those features at the Traverse RS model’s $50,000 price point either, looking at seven of the Chevy’s closest and newest competitors (Explorer, Chrysler Pacifica, Volkswagen Atlas, Hyundai Palisade, Kia Telluride, Subaru Ascent and Dodge Durango).

A user-friendly SUV needs more than a bunch of features; instead, it’s a matter of everyday functions working well. That’s certainly the case in the Traverse, and they work with lots of flexibility. For example, the back of the steering wheel houses volume and seek functions, while the display can be configured to show multiple rows of radio station presets that you can then scroll through without looking, or jump from one station directly to another far down the list without taking your hands off the wheel.

Apple CarPlay and Android Auto are also included, helping easily serve up all your favourite music, texts, and other phone content.

A unique rear camera mirror provides a wider field of vision to the rear, and works very well to see beyond tall rear-seat occupants or a cargo area full of party balloons. But the multiple cameras on the tailgate also have a handy tow view function, making it easier to position your trailer connection in the precise spot it needs to be. Even switching from two-wheel drive to four is a simple dial twist.

The standard 310-hp 3.6L V6 is one of the most powerful standard engines in the segment, with most of its rivals closer to the 290 mark. That said, both the Ford Explorer and Dodge Durango offer notably more powerful upgraded mills, the latter with two serious pavement-pounding V8 upgrades in the pricier R/T and SRT models.

The Traverse’s engine is much more subtle, an overall unobtrusive partner, though it’s willing to go when pushed. It offers decent grunt but rarely sparkling response, its 266 lb-ft of torque closer to its rivals in output, but generated at much lower rpm. There’s no official 0–100 km/h acceleration figures from GM for the minivan-fighting Traverse, but various online estimates have put it between a credible 7.2 and 7.5 seconds.

There are no paddle shifters – which aren’t exactly common in most three-row SUVs anyway – but the standard nine-speed automatic does provide shift buttons on the gear selector.

To go along with the engine’s decent power, the hefty Traverse RS is a confident handler, but it’s clearly more focused on the comfort side of this continuum. Highway ramps can easily be taken with gusto up to a point, but then the big SUV starts leaning in such a way as to question exactly what the driver is doing. (Said driver is wise to back off for risk of losing this argument.)

Comfort and practicality are really where the Traverse shines. The front seats are heated, which are notably better-breathing than the cloth seats on lower trims, although there are perforated leather seats in higher trims. Second- and third-row occupants have cupholders integrated into the armrests, with 10 places in total to stash drinks.

Rear climate controls are available to second-row occupants too, and if those passengers move their adjustable seats sympathetically forward, there can be fairly good legroom and space in the third-row seats as well, though you wouldn’t want to squeeze a seventh person in there except in a (slim) full-back child seat.

One item missing here is independent controls for heating the front seat and backrest. GM still offers this on some other models – being able to use seatback heat only for sore backs or muscles was a major GM advantage in years past – but it’s sadly not offered in the Traverse.

Officially, the Traverse averages 11.8 L/100 km in combined city and highway driving, but on the road in relatively mild winter conditions, I somehow averaged 11.1 L/100 km, even with a fair amount of city driving (roughly 60 per cent). Achieving anything near official numbers in wintertime is rare, especially if you use the remote start option, which I tested a couple times while walking up to the vehicle but avoided otherwise.

My better-than-expected result points to the benefit of its old-school torquey engine curves, with lots of power down low, where you don’t need as many cash-burning revs to keep up with traffic. The Traverse’s relaxed nature and my more careful driving patterns over the holidays with family often in the car likely made a difference, too.

It should be noted however that the hybrid versions of the Toyota Highlander and Ford Explorer, as well as the Chrysler Pacifica plug-in hybrid minivan, offer far more efficient drivetrains at similar or slightly higher prices.

The Traverse’s more conventional drivetrain (it still features auto-stop/start and other fuel-saving tricks) and aforementioned missing features occasionally give the impression of a worthy-but-not-quite-cutting-edge machine. This is unfortunate, because in the end there are plenty of positives and easy-to-use features throughout the interior, as well as engineered refinement baked into the Traverse – especially given its pricier platform-mates.

But adaptive cruise control is offered on the Honda Civic and Toyota Corolla models at roughly half the cost of this Traverse; sub-$30,000 Korean small cars include all manner of climate-controlled seats in the rear; and a growing list of three-row SUVs offer more advanced powertrains (see above), along with their associated fuel cost savings.

The 2020 Chevrolet Traverse is impressive as a traditional family-friendly SUV for buyers looking to maximize space for the dollar, and want a three-row hauler that doesn’t crowd itself out of the garage with oversized bulk. The RS model tested here offers a good mix of all-wheel-drive peace of mind, modern conveniences, and minivan-challenging comfort; though some useful features are reserved for top trims, which hurts its overall value.

It was only two years ago when the Traverse won a four-vehicle comparison of the least expensive three-row SUVs on the Canadian market, most of them around the $40,000 mark. But at more than $50,000, the Traverse faces some stiff competition from newer or more modern rivals, highlighting again that even for value leaders, if you’re not continually moving forward, you’re effectively falling behind. 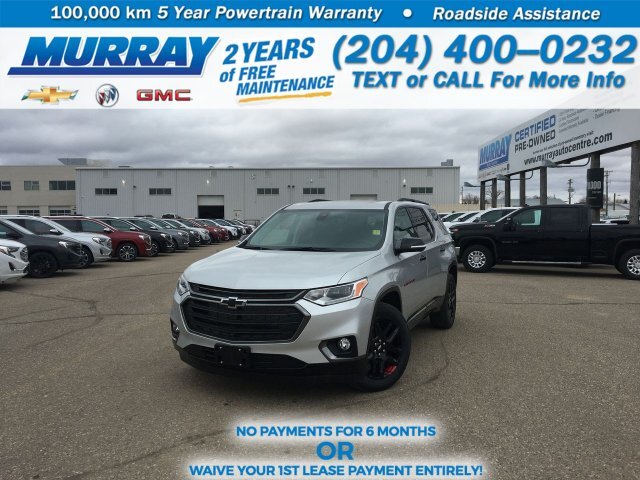 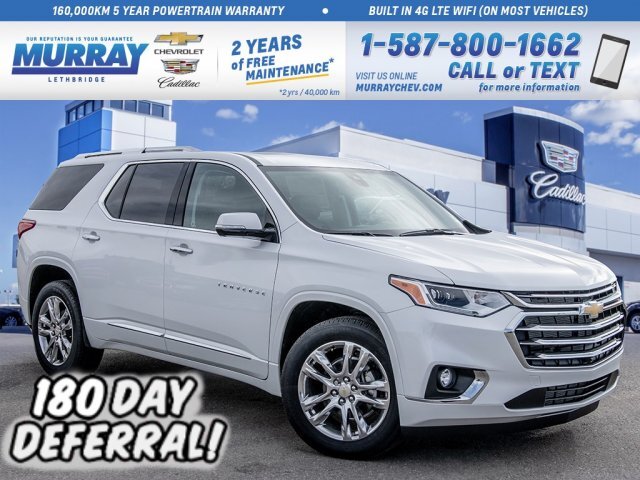