Canadians love big trucks, but they also have a spot in their hearts for the Toyota Tacoma, which rings in as this country’s best-selling model in the midsize segment.

The choices slim down a bit for 2020. It’s still available as an Access Cab or as my Double Cab tester, and the manual transmission option remains in place, but the base four-cylinder engine is gone and two-wheel drive is no longer available. All models are now V6-powered and four-wheel-drive. There are some new features on the various trim levels, too.

The Tacoma is a tough little truck and certainly looks it. The TRD Pro package adds the heritage-style grille, along with black fender flares, Rigid Industries LED fog lamps, and TRD badging, including inside the headlamp assemblies. The package also includes a power-sliding rear window.

The tailgate is damped, and it locks and is removable. Although there isn’t a step to help get into the bumper as on larger trucks, the Tacoma’s low enough that most should be able to scurry up with no problem. However, adding hood struts in place of a support rod would be appreciated. Some of us are closer to the ground than others, and I had great difficulty raising the hood high enough to insert the rod to hold it up.

Toyota includes various packages of active safety features as standard equipment on all its vehicles, and the Tacoma’s adds adaptive cruise control, emergency front braking, lane-departure alert, and lane-departure warning. A rear-view camera is standard, as it is on all new vehicles, while the TRD Pro package adds blind-spot monitoring that’s missing from the lower trim levels.

The Tundra has the inherent truck practicality of throwing stuff into the rear and taking it wherever, but it has its limits. Toyota is not shy about claiming its Tacoma is a “lifestyle truck” rather than a workhorse, and the numbers bear it out.

Likely its closest rival in the “lifestyle” category is Jeep’s new Gladiator, but it can tow 3,470 kg (7,650 lb) and haul 726 kg (1,600 lb). If you’re planning on doing some serious stuff with your truck, make sure the Tacoma can handle what you plan on asking of it.

The Tacoma’s interface is wonderfully simple, with large dials for the climate control (automatic dual-zone thanks to the TRD package), while the centre screen includes simple menus and icons, dials for the volume and tuning, and hard buttons to switch between the various screens. There’s a dial for switching from rear-wheel to four-wheel drive, while terrain select, a locking rear differential, and crawl control are handled by buttons and dials in the overhead console.

Up front, there’s enough storage space to toss small items; in the back, the rear seat cushions flip up and the seatbacks fold down. And when the seatbacks are released, they reveal hidden compartments for storing a bit more stuff.

But my $12,400 TRD Pro package swapped those out for Fox shocks, along with a TRD-tuned suspension with remote reservoir, Rigid Industries fog lamps, leather seats, unique grille and 16-inch wheels, and sunroof. The only step up from there, and not added to my tester, is a snorkel-style air intake for another $1,200. It looks like a water snorkel, but in actuality is meant to grab fresh air near the top of the windshield, rather than sucking in dirty air near the wheel wells when you’re kicking up dust on dry roads (and which comes with its own set of rules, including no automatic car washes, and turning the scoop around if you’re driving into heavy rain or snow). However, one popular-in-Canada feature, a heated steering wheel, isn’t available on any trim level.

Having dropped its four-cylinder, the Tacoma is now powered exclusively by a 3.5L V6 that makes 278 hp and 265 lb-ft of torque. All models are four-wheel-drive, with a choice of six-speed manual or my tester’s six-speed automatic.

That’s about mid-pack with its competitors for horsepower: less than the Gladiator or GM’s 3.6L gas engine or 2.8L turbo-diesel, but more than the Frontier’s V6 or the Ranger’s turbocharged four-cylinder.

Torque-wise, only the Gladiator’s 260 lb-ft ranks lower than the Tacoma’s. The Frontier kicks out 281 lb-ft, the Ranger provides 310 lb-ft, and you can go right to 369 lb-ft with GM’s little diesel. But other than bragging rights, you won’t feel let down by it. It’s a good fit to the truck, with strong acceleration and a throaty growl; and while multi-speed transmissions are all the rage, the six-speed automatic gets the job done – and quite well, too.

Alas, while the Tacoma impresses me in most of the other categories, this is where this truck and I part ways. The Tacoma basically gets its ground clearance from its tall floor, and then gains back headroom with a low-mounted seat.

The result is that I sit with my legs almost straight out, and I end up getting a sore back and cramps in my legs. The seat is now height-adjustable – previously it only went back and forth – but even that isn’t enough to create a comfortable position, and taller drivers will just end up even closer to the roof. The seats themselves are comfortable, with supportive cushions and just enough bolstering, but it’s not enough to overcome the issue of their placement in the truck. This is one vehicle I wouldn’t want to take on a long trip at all.

The Tacoma’s on-road feel is about what you’d expect for an older design. It responds well to steering wheel input but with very little road feedback, and while the Fox shocks smooth out the ride, it can feel a bit wallowy on asphalt. The brakes do a good job but the pedal can feel a bit smooshy, and I’d like to feel the brakes bite a little sooner than they do.

But there’s always some on-road compromise when a vehicle performs well off the pavement, and the Tacoma handles itself quite well on the tough stuff. The multi-terrain select adjusts for such situations as loose rocks or mud, while the crawl control acts as low-speed cruise control, adjustable in increments, so you can drive over long stretches without using the throttle.

Among its four-wheel-drive auto-equipped competitors, its Natural Resources Canada (NRCan) rating puts it about midway. Unsurprisingly, the small diesel available in the Colorado and Canyon sips the lightest at 10.5 L/100 km, but the Ranger’s turbocharged four-cylinder is right behind it at 10.9. Thirstier than the Tacoma are GM’s V6 at 12.2 L/100 km; the Gladiator at 12.3; and the Frontier’s ancient 4.0L V6 rings in at 13.5 L/100 km.

One of the issues many people have with midsize trucks is that while they’re smaller than their full-size counterparts, they’re not priced proportionately less. For the cost of my TRD Pro-equipped Tacoma, I could have a nicely outfitted Tundra Crew Cab 4x4 TRD Off-Road, and with thirty bucks left over. So buyers have to look at midsize trucks for what they are, not what they aren’t.

At a starting price of $37,450, the Tacoma is about average for the segment, but as you move up into the pricier trim levels, the truck’s large swaths of hard plastic – albeit easy to clean, a nice touch in something designed for off-road adventures – looks a bit cheap. The lesser-priced TRD option package available on my tester, at an extra $3,000, doesn’t seem too bad, adding a sunroof, wireless charging, leather upholstery, terrain-view monitor, and blind-spot monitoring, but the full-throated $12,400 for the TRD Pro digs pretty deep into the wallet, and I think I’d be leaving it off my list.

It’s the most popular midsize in our market, and it’s served up with some impressive reliability scores and resale value. It’s a good little off-roader, and while its driveline is aging, it gets the job done. But don’t sign on the dotted line until you’ve driven one, and for more than just around the block. I’m certainly not the first to complain about the Tacoma’s lack of comfort, which would ultimately be the deal-breaker for me on this otherwise decent little truck. But if you can get past that, take this thing out off the beaten path and have some fun. 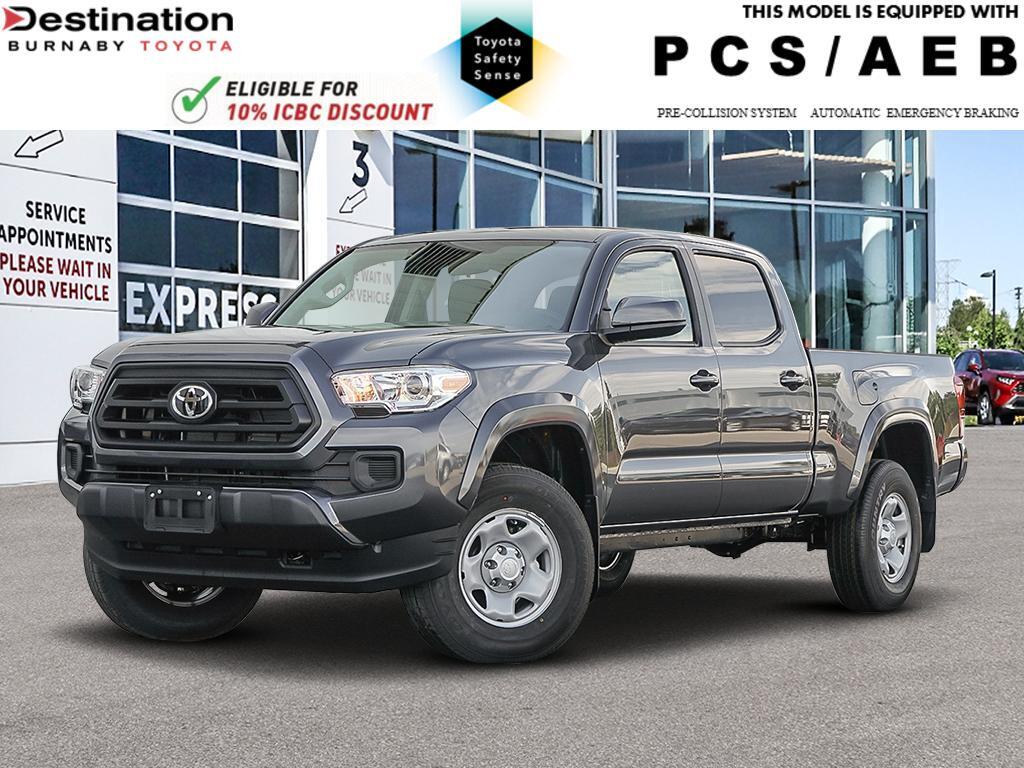