Long on luxury and power, the 2020 BMW M550i xDrive throws shade on its more-expensive M5 showroom-mate, all while delivering everything you’d need from a modern sedan. It’s only crime? Doing everything so competently that it lacks any of its track-star sibling’s personality.

BMW has gotten a little bit better at separating the sausage links these days, with the larger 7 Series now sporting a monster grille to go with its more angular proportions compared to the 5 Series. Still, the M550i is close enough in design to its more affordable 3 Series cousin to give you pause when trying to differentiate them from afar. It’s a handsome car, but it doesn’t stand out – which is perhaps in line with what the middle managers targeted by the brand are hoping for when tucking into their assigned spots in the corporate parking lot.

Inside, the car comes across as considerably more upscale than the brand’s entry-level efforts. My tester featured a fine brown leather interior and a number of details scattered throughout the cabin to remind you of just how much money you spent.

By the time you get to the top of the 5 Series food chain (higher-performance M5 model notwithstanding), you’ve got the right to expect a fair bit of standard safety gear. In this area the BMW M550i xDrive sort of – kind of – delivers, providing blind-spot monitoring and automatic emergency braking but makes you pay more for features such as lane-keep assist and adaptive cruise control. The extra fees aren’t onerous – $2,500 for the Advanced Driver Assistance package that adds most of what you would want – but it’s irksome when this equipment is often built into the price of non-premium models.

Mid-size sedans like the BMW 5 Series are often overshadowed by crossovers when it comes to discussions of practicality, but not everyone is looking to haul home a 55-inch TV on a weekly basis, or tow a camping trailer that they don’t own. In terms of providing ample room for four adult passengers and accommodating their luggage – or in my case, a trunk full of engine rebuild components – it’s hard to argue that the M550i is anything other than a logical, useful choice for luxury-seeking drivers.

BMW’s iDrive system is at the heart of the M550i, and it’s your portal to doing everything from changing drive modes, to listening to music, to entering navigation coordinates. Overall, it’s an excellent setup, but a couple of quirks intended to wow owners end up working against its functionality. Of these the primary offender is gesture control, which allows users to wave their hands in the air to raise and lower the volume on the stereo, or move forward or backwards on a track list. I lost count the number of times a random hand movement in front of the infotainment screen muted the stereo completely, causing confusion and chaos until the situation was finally figured out. A similar annoyance can be found with the voice command system, which is activated by saying “OK BMW” or some reasonable facsimile thereof – and trust me, you’ll eventually discover which everyday phrases sound most like the car’s trigger words.

Aside from these annoyances, iDrive is fantastic – although I’d love to see something more interesting done with the gauge display in front of the driver, as Audi and others feature better use of that prime digital real estate.

If you go wild on the options sheet, there’s very little equipment you can’t stuff into the BMW M550i. Everything from remote parking (a party trick for sliding into tight spots you’ll probably never need to use), to massaging seats, to heated and ventilated thrones is available in the 5 Series. A fair amount of this gear is offered à la carte. There’s even the Ambient Air package for anyone who’s ever thought that their car needed to come with up to eight fragrances wafting through the cabin, all the while titillating occupants’ nostrils.

For the 2020 model year, BMW has added a gob of extra horsepower to the M550i’s already impressive twin-turbocharged 4.4L V8 engine. The new tally is 523 hp and 553 lb-ft of torque, the kind of numbers that would have once been reserved for the big-M version of the car, but which technology has democratized for (just barely) lesser editions like this one. Indeed, it’s hard to think of a situation where you’d require the 75 additional ponies provided by the M5’s similar V8 setup, as the M550i’s acceleration is fantastic in every situation. It’s a tasty motor with an even bigger sweet spot when it comes to torque curve, making easy work of both passing manoeuvres and ticket collecting during your daily commute.

The 2020 BMW M550i xDrive is far more comfortable on a long trip than any of its comparably priced luxury SUV rivals, a dimension of sedans that is fast being forgotten in a market where ride height trumps all else. If most buying decisions were made objectively, there’d be far fewer crossovers on the roads and more smooth-steering, cloud-riding, ample-spaced four-doors like the 5 Series.

While the 2020 BMW M550i xDrive might have near-M5 levels of power, it doesn’t quite match its more track-oriented sibling when it comes to chassis tune – and that’s completely okay. If I’m being honest, I prefer the M550i’s smooth demeanour (and equally glassy eight-speed automatic transmission) to the more uptight nature of its over-muscled counterpart, because there’s little chance any 5 Series owner is going to be subjecting their sedan to road-course shenanigans anyhow. A large, heavy luxury car like this one is best enjoyed as a point-to-point land rocket, with the occasional backroad leg-stretch thrown in for good measure, and by this measure, the M550i excels.

Steering is fine, although relatively dead in terms of feedback, and the car is well-supported through corners without crossing the line into offering a truly sporty character. While it might stop just short of being engaging to drive, it’s certainly quick and competent enough to make you smile. Throw in the foul-weather capabilities of its standard all-wheel drive system (which was flawless in keeping the shiny side up during a recent heavy winter rainstorm), and the M550i is an all-around winner.

Natural Resources Canada (NRCan) lists the 2020 BMW M550i xDrive as consuming 13.6 L/100 km in the city and 9.3 L/100 km on the highway. I saw 14.0 L/100 km during cold winter weather with a heavy highway component, which was a little surprising given that other BMW vehicles I’ve driven with the same drivetrain were a little more frugal.

It’s hard to applaud a car that retails for over $100,000 on its value proposition, but at its price point, everything about the M550i is competitive with similarly sized rivals in terms of features, equipment, and performance. My test vehicle came with over $14,000 in options, which is about par for a BMW, but that’s indicative of the trim level’s top-tier status.

The M550i delivers the best of what you can expect from mid-size luxury sedans without forcing you to deal with overly athletic, rough-and-tumble suspension or engine tuning. It’s very fast, exquisitely comfortable, and respectably styled. Why pay more for an M5 you’re never going to fully exercise? 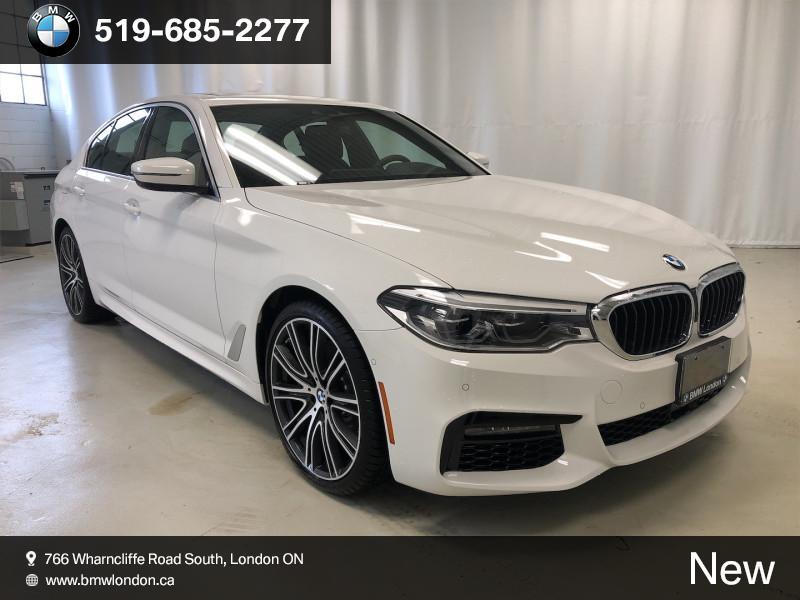