The Kia Telluride and Hyundai Palisade are almost identical in terms of platform, powertrain, and specs, but they have more than enough differences to make choosing one a tough decision. Fortunately, we’ve spent a good chunk of time behind the wheels of these family haulers, leaving us with a clear picture of the good and the bad of both – and a decision about which one is worthy of your hard-earned money.

For two cars with so much in common, it’s impressive how the two Korean brands have imprinted distinct styles into these vehicles. The Telluride looks rugged thanks to its bulbous design cues. The large grille and the vertical headlights with amber highlights are extremely attractive, and the dark green paint on our tester enhanced the outdoorsy vibe it exudes.

The Palisade looks far softer, with curves instead of bulging corners. There is more chrome to be found on the Hyundai, which is a bit gaudy and unattractive, but the headlights, fog lights, and daytime running lights are easily identifiable from a distance and give the Palisade a presence of its own. In comparison, the Palisade looks less rugged, but more high-end, almost like a vehicle from Lincoln or Infiniti.

While exterior preference comes down to taste, the interiors of these two crossovers are undeniably different. The design, materials, and layout of the Hyundai look more special than the Kia. For example, the cream-coloured leather upholstery is found not only on the seats but on door panels as well, with a quilted pattern that brings to mind luxury brands like Infiniti or Lexus. The upholstery is accented by metallic trim pieces that have a nice texture, furthering the high-end feel.

There’s an incredibly soft suede-like headliner in the Hyundai too. Additionally, the knobs and buttons of the Palisade also feel unique and different from other Hyundais – and perhaps fall in line more with the automaker’s luxury brand, Genesis.

The Kia Telluride has an impressive interior as well. Like the Palisade, it has a soft suede headliner, and the black leather upholstery has some unique stitching patterns. It certainly feels like a step up over other three-row crossovers, but not the Palisade. For example, while the Palisade’s interior design is unique and unlike other Hyundai interiors, the Telluride is very much similar to some other Kias, like the Stinger GT. That’s not necessarily a complaint, though the Telluride does have a few hard plastic panels, and ugly piano black panels that attract fingerprints. The Telluride’s harder materials may boast better durability compared to the Hyundai where kids are concerned, but in terms of design and style, the Palisade is more impressive.

These three-row crossovers also take contrasting approaches to space and practicality. The Palisade has cubbies and storage areas throughout the cabin and feels fairly spacious. With all seats in place, it offers 509 L of cargo volume. Fold the third row and that expands to 1,297 L, while tumbling the second row brings the total to 2,447 L.

The Telluride has much more space in almost every way. With all seats up, it features 601 L of space, while offering 1,304 L with the third row out of the way, and 2,455 L with both sets of back seats gone. Beyond the cargo volume, passenger space is a highlight of the Telluride, as it features more head and shoulder room in all three rows, as well as more hip room in the first and second rows. If you want the most amount of space in your three-row, the Telluride is the better choice.

For the most part, the two crossovers match each other in terms of features. That means both vehicles offer heated and ventilated seats for the first and second rows, a heated steering wheel, dual-pane sunroof, and USB ports galore. There are also sun shades in the second rows of both. The Palisade and Telluride both feature power liftgates, though the Hyundai adds power-folding and reclining third-row seats.

Both cars feature 10.25-inch infotainment screens and support Android Auto and Apple CarPlay. There are also wireless charging mats up front in both. The Palisade features an attractive digital gauge cluster, something that makes it seem far more high-end than the Telluride.

Both vehicles feature the same powertrain, along with all associated features. That means a 3.8L V6 making 291 hp and 262 lb-ft of torque, mated to an eight-speed automatic transmission and all-wheel drive. Lesser models of the Palisade can be equipped with front-wheel drive, while all Tellurides power all four wheels. Both vehicles feature automatic engine start-stop, and a drive mode knob, with half the settings dedicated to on-road modes and the other half to off-road or inclement road conditions like snow or mud. The settings are named identically, dropping the illusion that these two vehicles are distinct or different.

While the powerplants are twins, there were a few occasions where the Palisade felt slightly more refined than the Telluride, specifically when it came to gear changes. Sometimes the Kia would stumble when picking a gear, or land in a gear awkwardly with a stutter, which didn’t seem to happen with the Palisade. Both vehicles get up to speed adequately but feel more impressive when attempting passes at highway speeds. They’re best described as highway heroes, happily soaking up the miles at high speeds.

The Palisade and Telluride have yet to be rated by Natural Resources Canada (NRCan), but since they have identical powertrains, they should hardly differ in terms of fuel economy. Hyundai says the Palisade should return 12.3 L/100 km on the highway, 9.6 L/100 km in the city, and 11.1 in combined settings. Kia isn’t far off, suggesting the Telluride will earn 12.5 L/100 km in the city and 9.6 on the highway. After testing the two in dense traffic on a hot day, we found the Telluride to perform a bit better than the Palisade in terms of fuel economy.

Driving the two behemoths back to back, you have to get quite granular to determine large differences between them. The Hyundai gives the impression of a refined ride, as its smooth, quiet, and accommodating. Though hardly agile, it responds to inputs nicely, and it never seems to have a lot of body roll or uneasiness when cornering or driven aggressively. Perhaps it’s the window design, but the Palisade does feel a bit clumsier than the Telluride in terms of navigating traffic. Sightlines seem better in the Kia.

The Kia’s suspension feels less firm than the Hyundai. You get body roll, although it’s very minimal. As a result, the Telluride feels a bit more rugged, capable of tackling soft-road situations like gravel or snowy or sandy roads with more confidence than the Palisade. We’ll have to confirm this feeling when winter hits, but one more difference we noticed was that the Hyundai was a bit quieter than the Telluride, but only in terms of wind noise. Perhaps the boxy design of the Kia affects it a bit too much here.

However, the Insurance Institute for Highway Safety (IIHS) has only awarded the Palisade with its Top Safety Pick Plus+ rating due to its superior headlight performance. The IIHS noted that the Telluride, even in top trim, offers inadequate high-beam illumination.

The two vehicles have very slight differences, and nothing showcases that more than the pricing. The Hyundai Palisade Ultimate that we tested is the range-topping example with a price to match: $54,199. You can save an extra $200 by getting a standard colour. It’s a big jump from the $38,499 starting price – although it’s important to note that base Palisade models come with front-wheel drive.

The comparable Kia Telluride SX Limited with Nappa leather has an asking price of $54,195, just a few dollars less than the Palisade. You don’t get the fancier interior of the Palisade, or the digital gauge cluster, both of which feel worth the price difference.

It’s not a toss-up, but these two do have plenty in common. Exterior styling is up to the buyer’s preferences, but it is hard to argue against the interior design of the Palisade. However, if buyers have a bigger priority on interior space, then the Telluride is the better choice. Our pick goes to the Palisade, which feels more special and high-end than the Kia. 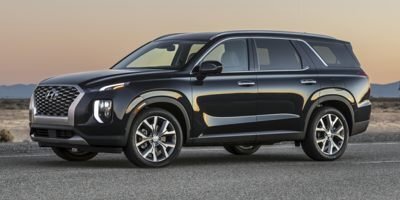