More and more, consumers are demanding crossovers in place of sedans and hatchbacks, and automakers are delivering with plenty to pick from.

For those who aren’t quite ready to move on from the comfort and convenience of a car but are increasingly intrigued by the perceived ruggedness offered by a cladding-covered crossover, there’s the 2020 Hyundai Kona, a small CUV with the character of compact car. It also just so happens to be one of the best little crossovers on the market today.

In a segment where stale driving feel is forgivable, this tiny Hyundai is pleasantly engaging around town. If you’re in the market for a subcompact crossover, you’re likely not looking for something sporty – and the Kona isn’t especially so. It does, however, manage to ditch the dullness common in most crossovers for something more car-like than much of the competition.

With the dimensions of a small hatchback, including wheels pushed about as close to its corners as possible, the Kona is an agile little runabout that’s easy to manoeuvre and is even a little playful at times. Adding to what’s best described as liveliness lite are a trio of drive modes that let you dial up – or down – the enthusiasm to match your mood.

Limited in their function to manipulating the transmission and throttle responsiveness, the selectable Eco, Normal, and Sport modes change things up just enough to make them worth using. As the name would suggest, Eco’s aim is maximum efficiency, while Sport amps up the throttle response and keeps the engine churning at higher revs so it’s ready for the next pass. This is where paddle shifters, offered by some competitors but not here, would come in handy.

The Kona is one of the few entries in its class to offer the choice of two engines – a less powerful base motor, or something with a little more punch. Thankfully, our tester came equipped with the available 1.6L turbocharged four-cylinder engine, a superior choice in almost all measurable ways.

Making 175 hp and 195 lb-ft of torque, both among the most offered in the segment (only the turbo offered in the Jeep Renegade generates more output), the Kona is downright quick from stoplight to stoplight, something that comes in handy around town when the need to pass parked cars presents itself.

Mated to a smooth-shifting seven-speed dual-clutch transmission, all the torque the engine makes comes on at an ultra-low 1,500 rpm, meaning accelerating off the line is a breeze, as is merging and passing. (When it comes time to do the latter on the highway, the transmission can be controlled by moving the gear selector to the left, a clunkier process compared to paddles.)

Regardless of engine choice, fuel economy ratings are similar. Natural Resources Canada (NRCan) gives all-wheel-drive versions of the Kona a combined fuel economy rating of 8.6 L/100 km – a number bested by our tester, albeit slightly, during our time with it.

Where the base 2.0L engine is rated to burn 9.2 L/100 km in the city and 7.8 L/100 km on the highway when paired with all-wheel drive, the all-wheel-drive-only 1.6L turbo engine is good for 9.0 L/100 km around town and 8.0 L/100 on the highway. Those are rather respectable numbers and fall closely in line with other all-wheel-drive offerings in the segment.

While the Kona’s ride is a little on the rigid side, it’s certainly not rough. The stiffness of the Kona’s car-derived platform simply overshadows its suspension damping, meaning rougher roads are felt throughout the vehicle. It’s not as if the Kona is uncomfortable, it’s simply more car-like than crossover. Whether you prefer that quality comes down to taste, but the Kona certainly is easy to drive.

Taller drivers take note, however: Headroom is at a premium. The experience of shorter drivers will definitely differ, but the available sunroof left me feeling quite cramped in either front seat. Not only did I routinely whack my head on the grab handle when looking out the window, but outward visibility in general wasn’t stellar, and I found myself craning my neck to check for a clear path when changing lanes.

The cabin is also a rather noisy one, with not much sound insulation to speak of, including carpeting that does little to quell road noise from making its way inside. The cabin also isn’t great for accommodating more than two people with any frequency, as rear seat space is far from generous.

The city-sized CUV is nimble and easy to manoeuvre around town, its tiny dimensions making it ideal in urban environments. It’s only when it comes to carrying cargo that the Kona’s compact size becomes problematic. While the rear opening is adequately wide, space for stuff stands at 544 L – less than the 705 L offered by the barely bigger Hyundai Elantra GT hatchback.

The trunk provides enough space for most grocery runs and the like, but anything more than a weekend away could lead to logistical challenges. Such is the sacrifice made by these small crossovers, and the space behind the Kona’s rear seats is about average for the segment.

When the back seats are stowed, the Kona can swallow 1,296 L of cargo, among the least in its class, though the floor is almost entirely flat, which makes the most of the available room. Liftover height is also low, a benefit of the Kona’s diminutive dimensions. That means it’s easy to load larger and heavier items without straining one’s back.

If the aim of the Kona is to look rugged, it’s not doing a bad job. Yes, styling is subjective, and no, the exterior aesthetics on display here probably aren’t to the tastes of many. However, the Kona certainly isn’t short on the type of cladding usually reserved for something far more trail-ready. It also deserves points for being unlike just about anything else on the road. (The Kona almost – almost – makes you wonder what kind of success the Pontiac Aztek would have if it went on sale today.)

Graciously, Hyundai went with something of a more understated interior design. While lacking a bit of character, the space is stylish and modern, with a clean aesthetic overall. The top-of-the-line Ultimate trim is also available with an interior appearance package that adds a nice splash of colour to what’s an otherwise ordinary space.

For an extra $200, red, yellow, and orange versions of the Kona get a smattering of interior accents that match the outside, including HVAC vent and gear selector surrounds, and piping on the leather seats. However, no amount of colourful trim pieces can hide the Hyundai curse of cheap plastics used inside, especially on the dash and door panels.

Where the Kona might be questioned for its form, few can nitpick over its function. Hyundai has all but perfected the art of the well-equipped and well-priced automobile, and the Kona is a fine example. Our top-of-the-line tester was kitted out with just about everything one could want in this segment, save for ventilated seats.

For its $32,199 sticker price before fees, the Kona 1.6T Ultimate AWD includes everything up to and including heated seats and steering wheel and satellite navigation, but even base versions get Apple CarPlay and Android Auto, heated seats, and alloy wheels for the $21,199 starting price.

The touchscreen resolution could be sharper, and the image quality from the rear-view camera is downright terrible, but the screen itself is fairly responsive and is as easy to grow accustomed to as the rest of the Kona’s cabin and features.

The Kona also offers all the advanced safety features the industry boasts these days, including adaptive cruise control, lane-keep assist, and automatic emergency braking; but they’re only available on the top two trims – not that either is overly expensive, but it is noteworthy.

The Insurance Institute for Highway Safety (IIHS) awarded the Kona with its Top Safety Pick+ designation, but it only applies to the top trim thanks to the suite of safety features and its steering-responsive headlights. But what matters most are the crashworthiness results, and that’s where the Kona scored top marks across the board.

Our top trim also came equipped with a head-up display system that pops out of the dash to show vehicle speed and speed limits, among other features. It is, however, a cheap and flimsy-looking plastic unit that I stowed for much of my time with the Kona.

Thankfully, hiding the head-up display is as easy as the push of a button – and it’s a great example of the intuitiveness built into just about every facet of the Kona’s functionality. Rarely will it leave you wondering how to enable or disable a feature or what a button does, with all controls clearly labelled and properly placed.

If it were my money, I’d slide across the showroom and into the Elantra GT, the brand’s hatchback that competes with the likes of the Honda Civic and Toyota Corolla. Not only does it feel slightly more buttoned-down than the Kona, but the Elantra hatch also boasts more passenger and cargo room despite being dimensionally similar to the Kona.

While the Elantra hatch isn’t available with all-wheel drive, which may be a deal-breaker for a lot of buyers, it’s something I could live without – and certainly doesn’t negate the need for winter tires – and I’d rather pocket the cash.

Where apples are apples, the base Elantra GT with automatic transmission added is priced at $21,949 before freight and fees. That compares to $22,949 for a similarly equipped Kona – a price that swells to $24,949 when all-wheel drive is added. The sportier Elantra GT N Line, meanwhile, tops out at $30,699.

However, if you’re hellbent on buying one, this small crossover isn’t bad bang for the buck. Even the fully loaded Kona 1.6T Ultimate AWD seen here barely breaks $34,000 with destination and delivery – and that includes the additional $200 red piping on the seats. For that price, you get a rather well-optioned ride that includes most everything one could want, with the only notable exception being ventilated seats.

If you’re willing to sacrifice space in exchange for the standout style this subcompact crossover offers, then the Kona is definitely worth a look. While it’s a little cramped, the Kona is a great driver that comes well equipped at a reasonable price. And as competitive as this segment may be, the Kona is still among the best you can buy. 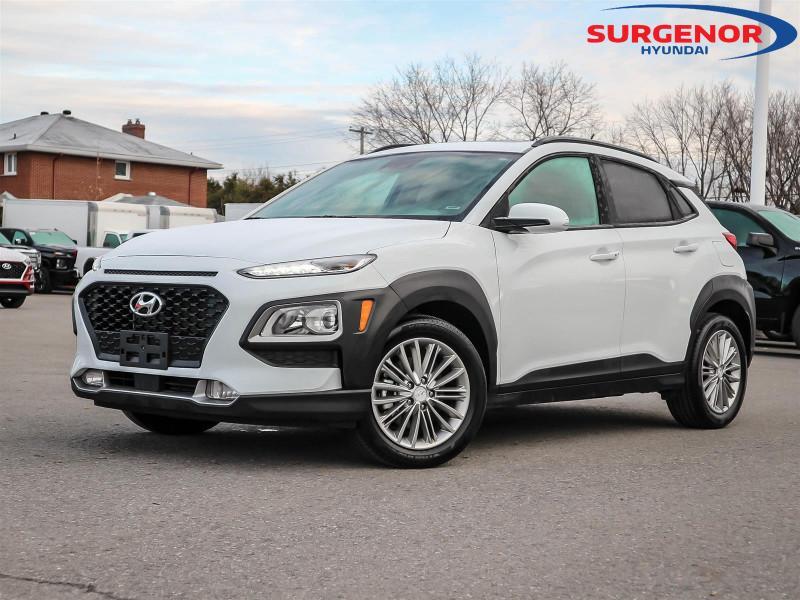 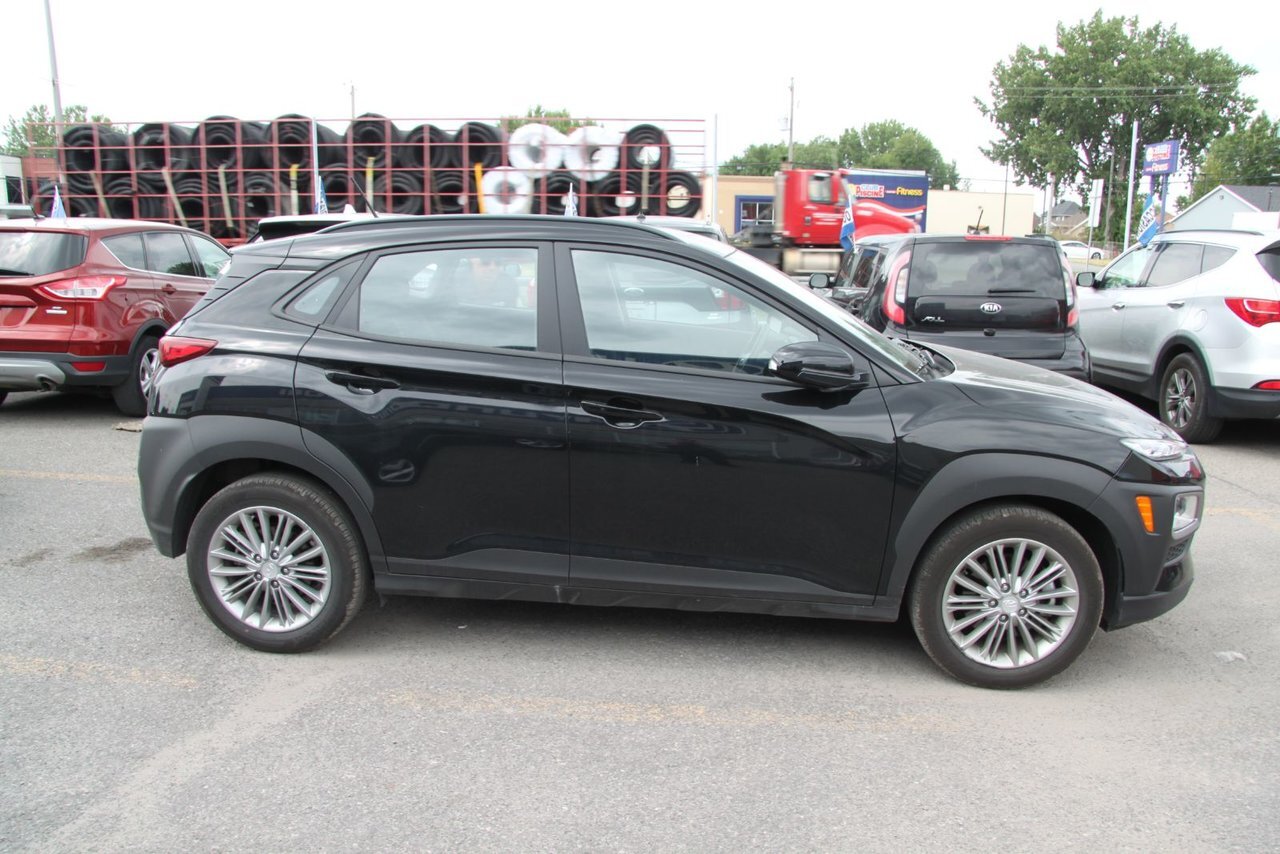