MONTGOMERY, Alabama – It’s strangely unsettling to be coasting through the site of so much civil unrest, while figuratively – and literally – insulated within the comfortable confines of our vehicle.

There’s some consolation in knowing that said vehicle, the new 2020 Hyundai Sonata, will have an enormous influence on the economic health of the region. Fifteen years ago, the Hyundai Motor Manufacturing Alabama plant was an empty cow pasture. Today the HMMA represents a US$2.4 billion annual impact for Montgomery County, and a statewide economic impact of $4.82 billion.

Last May, the company announced a $388 million investment towards a new engine plant and production support of the new Elantra and Sonata.

All-new from tip-to-tail, the Sonata we’re driving is a stunner, with a stylish, coupe-like roof-line reminiscent of the Mercedes CLS or Audi A7. The interior is equally sophisticated, boasting technologies usually found only in premium segments.

Sedans are far from dead

So why would Hyundai make such a substantial investment in a segment regarded by most as on a terminal downslide?

Brian Smith, Hyundai America’s Chief Operating Officer believes that many people jumped on the bandwagon by embracing the crossover trend, but ended up missing their sedans. Mid-size four-doors are still the fifth largest segment in the auto industry, with nearly 1.5 million sold annually.

And while some manufacturers have axed most of their passenger car lineup in pursuit of the more lucrative crossover market, those remaining have improved immeasurably to hang on to their marketshare.

While many buyers cite gas mileage as their main reason to question SUV ownership, sedans have also stepped up their functionality, with larger trunks and fold-flat seats among their concessions to flexibility. But above all, sedan customers missed the premium style, the quiet comfort, and superior driving dynamics of their sedans.

The year 2011 marked a turning point for Hyundai, and specifically, the Sonata. When the first reports began to trickle in that it was a very good car indeed, it took many of us by surprise. We’ve since learned not to underestimate the Korean car maker.

For 2020, Hyundai’s pulled out all stops to ensure that the eighth generation Sonata will not be overlooked. “Sensuous Sportiness” is the new design language, and its “emotional target” is apparently to “make you want to touch it”, according to senior designer Kevin Kang. It’s sleeker, more sophisticated and less overtly sculpted than its predecessor, with a rakish roofline that suggests a lift-back (it’s not, unfortunately).

The wheelbase is longer, the overhangs are shorter. Engineers and designers came together to drop the strut tower mounts and enable a low slung hood with better forward visibility. The tapered nose is un-marred by a shut-line, the hood’s sheet metal meets the grille without any interruption. The enormous blacked out grille is flanked by matching air intakes and brake ducts, and underscored by a chin splitter.

But perhaps the strongest design statement is the slashing LED headlights, underlined by a chrome “dynamic lasso” that loops around the headlights and continues along the car’s shoulder to the tip of its tail. Using “perforated laser technology” these strips illuminate in a graduated fade, accentuating the headlights for a unique, signature look.

Rounding up the back is a short deck lid topped by with a rear spoiler featuring aerodynamically functional “divots”, and a solid brake light whose span emphasizes the width of the vehicle.

The Sonata is the first to ride on Hyundai’s new platform, whose modular architecture will underpin several vehicles to come – including hybrid and electric variants. Along with the usual “lighter (127 lb), stiffer, stronger” patter, the Hyundai marketeers extolled the architecture’s new safety measures, emphasizing their new “multi-load path” structure that uses collision energy management to dissipate energy upon impact, and yaw control to prevent the car from spinning.

By encouraging the car to slide rather than rotate during front corner impact, it reduces torsional energy in the cabin, and prevents serious head and neck injury.

In addition to being lighter, the new car’s heavier components – such as engine and transmission – are mounted lower in the frame to improve driving dynamics, and body cladding underneath manages air flow for better aerodynamics. The cabin’s sanctity is protected with more sound deadening, more rigid subframes reducing harshness and noise, and in addition to the usual sandwiched windshield, laminated front door glass and layered sealing more typical of the premium segment.

Also available are Surround View Monitoring, and a nifty blind spot monitor that replaces either of the two digital gauges in front of the driver with a left or right side view when the turn signal’s activated. For the first time, Hyundai is offering a premium Bose Sound system with 12 speakers on upper trim levels.

A slick new digital key can store all the components of the key fob in a mobile app which customers can then use to sync to their vehicle. Users can store their individual settings (seat, mirrors, sound, permissions) in the apps profile. They can also remotely share access to the vehicle; for instance, a digital key can be sent as an invitation, with a set duration (from one minute to a year) and even setting restrictions to the type of access (for valet, or young drivers).

The digital key will use Bluetooth within a 30 foot range to lock, unlock and Near Field Communication (NFC) to authenticate the driver once the smartphone is placed in the wireless charger.

Also notable is the new Remote Smart Parking Assist, which allows the user to use the key fob to park while outside the car, which is useful after unloading cargo and then backing into close spaces, or tight, multi-car garages with no room to open doors. This tech can also be used to summon the car, and it will slowly leave its spot, gently avoiding obstacles and pedestrians as long as you’re within 30 feet and holding the fob.

A new 1.6L turbo producing 180hp at 6,000 rpm and 195 lb-ft at 1,500-4,500 rpm is also available, with continuously variable valve duration (CVVD), and a 10.5 compression ratio. Both come mated to an 8-speed automatic, the company’s first-ever shift by wire, using push buttons instead of a traditional gear selector to free up room in the centre console.

Power is channelled through the front wheels on all Sonatas, and there are no plans to offer an all-wheel-drive model.

The only cars available for testing were pre-production Limited (loaded) models with 1.6L engine, since production of the 2.5L is slated to start later this year. While Canadian trim levels haven’t been announced yet, the U.S. spec vehicles started with base SE with 2.5L, and standard safety equipment, SEL adding Premium and Convenience features; SEL Plus which adds the 1.6L Turbo and extra technology, and the top-spec Limited, which adds advanced safety features including the remote parking assist.

The tan leather interior of our tester is an agreeable place to spend a day behind the wheel. The wheel is fat and grippy, the dash is a cleanly executed study of flat planes and horizontal shapes and outlined in chrome piping that echoes the exterior headlight lasso. At this trim level, there’s a 12.3 inch digital screen replacing the traditional gauge cluster, a 10.25-inch wide touchscreen above the dash, and an 8-inch colour head up display.

Standard is Apple CarPlay and Android Auto, but the onboard nav is easy to use and won’t burn up all your data. Seats are comfortable, even in back, where the cushion’s thickness has been reduced to increase headroom under that sloping roofline. Front legroom is the best in segment, but rear trails behind as one of the shortest. The Sonata’s designers are particularly proud of the door panels, where they’ve managed to carve out enough space for a wide, cushioned arm rest and storage pocket.

Though we’re repeatedly reminded of the car’s pre-production status, it feels buttoned-down and well-executed with no loose threads, rattles, or technical glitches.

Over several hundred miles of Alabama’s back roads, the Sonata proved well-behaved, with impeccable manners and a quiet demeanour. And while it would be a stretch to call it sporty, it’s nicely composed while cornering. The Macpherson strut/independent rear suspension is tuned more for comfort than dynamic handling.

The engine has enough low-end torque to feel responsive, though the engine note is not the prettiest-sounding  when it’s pushed. The transmission is a smooth performer, if a bit reluctant to respond during a hard launch but reacts a lot quicker in sport mode, which also quickens the throttle response and adds weight to the steering.

The top three midsize sedans, the Toyota Camry, Honda Accord, and Nissan Altima represent over 800,000 – or more than half of the 1.5 million sales in their segment last year.  The Sonata’s sales were just a little over 105,000. All of the top competitors offer a long list of premium interior features and sophisticated technology – but looks are subjective. And with its beautiful silhouette, and distinctly unique (and polarizing) new face, the 2020 Hyundai Sonata is angling to steal attention from the top three, and prove that the mid-size sedan is far from dead.

The 2020 Hyundai Sonata should arrive in Canadian dealers some time next spring, with prices available closer to arrival date. 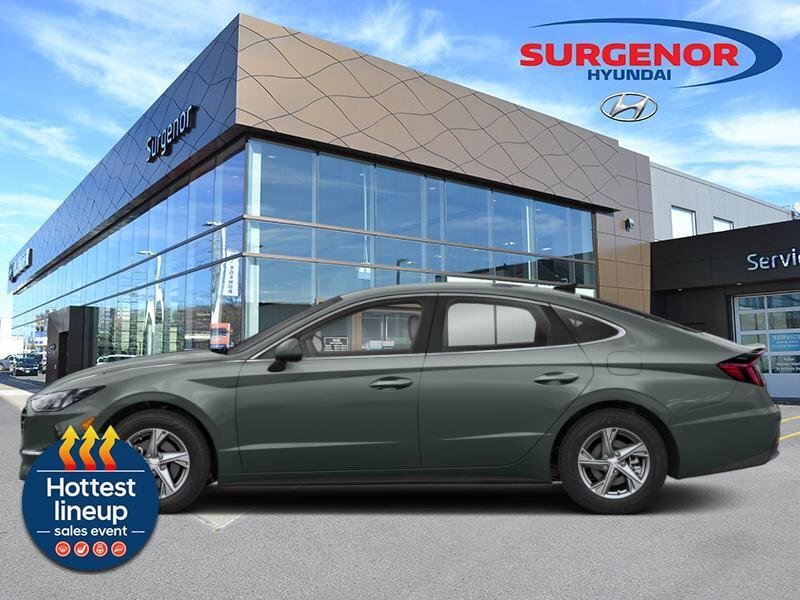