It almost never fails. People see the keyfob on a table somewhere at a group gathering, and the response is brisk: “Who’s driving the dad car?” And I always know who they’re talking about: It’s me, because I’m driving the Buick and that’s kind of what Buicks have become.

Here’s the thing, though. Take the 2019 Buick Encore compact crossover you see here. It’s about as far from your traditional Buick as you can get: It’s not a sedan, it’s not beige, and it’s actually a representative of a body style that’s been successful in Europe for quite some time and has only just started making inroads in North America over the last handful of years. Plus, I am a dad, and I feel like I’m kind of cool.

It’s not a complete knockout punch in the styling department – especially in the black seen here. Even though it does cost a premium to spec, it doesn’t pop like some of the other colours available for the Encore, such as deep azure metallic or winterberry red metallic.

The chrome highlights are a nice touch, as they speak to the quasi-luxury bent that Buick has, though I feel like the wheels are a little much, a little gaudy, for the sporty, compact body style. I’m big fan of the grille, though – it’s traditionally styled, but it fits well thanks to the chrome over black mesh. The “upside-down hockey stick” daytime running lights either side look good, too, though I do miss the bluey bulb surrounds older Buicks – including this one – used to have.

Inside, my tester’s “brandy” colouring is luxurious, but I guess it’s a little on the old-school side, not quite as youth-oriented as the Encore purports to be. The dash has a few curved surfaces here and there, but it’s a pretty basic overall look – the infotainment display is nicely integrated, but you won’t find anything like a digital gauge cluster here.

Being the top “Essence” trim, my tester had pretty much everything you can get on the Encore, save for a few exterior bits like a roof rack or trailer hitch. Active safety systems include lane-keep assist, forward collision alert, and blind-spot alert. However, no adaptive cruise control is included, nor is it offered as a standalone option or as part of any package. That’s disappointing, and I can see it costing Buick sales against competitors like the Volvo XC40 or Lexus UX.

Buick’s infotainment is actually pretty good: The interface is slick, the graphics are modern enough, and the 8-inch touchscreen is responsive. There’s also Apple CarPlay and Android Auto as standard (as well as a 4G LTE Wi-Fi hotspot). The six-speaker count isn’t all that high, but this is a small car so I’m not sure additional speakers would have any real effect on the proceedings.

The one thing I would call attention to is the way the trip computer works: Instead of pressing a dash-mounted button to cycle through the displays, you actually twist the end of the left-hand stalk. It’s not a bad thing necessarily, but it isn’t all that well marked and takes some time to learn.

From the outside, the Encore looks like it has a tall roof an when sat in the front seat, that rings true even with the moonroof. Headroom is good, and while the pedals are a little too upright for my liking, the legroom is fine – once you adjust the six-way power seat, of course.

Trouble is, once I got that seat adjusted properly, it left the passenger behind me with precious little legroom, an issue that’s compounded by the snug headroom – the pocket into which the moonroof retracts is very noticeable in back, to the point where I know I wouldn’t last long – shorter occupants wouldn’t have as much as an issue of course, but that high roof isn’t entirely reflected in rear-seat headroom. And it’s not that small crossovers like this can’t do back seats with at least a modicum of comfort; see the Honda HR-V for how it can and should be done. That’s without commenting on the seatbelt buckle, too, which managed to disappear into its pocket a number of times during out test. Frustrating.

Best you leave the kids back there, and the good news is that we managed to fit a rear-facing child seat behind the front passenger without completely killing the front seat passenger’s legroom, though you would have more in a Mini Cooper Clubman. The ISOFIX latches are a little deeply recessed behind the seat cushion, but it’s not the worst I’ve ever seen.

Automatic dual-zone climate control comes as standard on the Essence trim, and I was happy to find that A/C was quick to react as my test occurred during a hot summer week. The vent shape and alignment are a step up on older Encore models, which had two vertical vents either side of the centre console that never quite got the job done. The more traditional horizontal vents are a better solution.

Along with child’s seat installation, I was also pleasantly surprised by how easy it was to fit a large stroller in the rear cargo area. I didn’t think it would make it, but it went in there without any drama and the liftover height shouldn’t be a problem for most owners. I wasn’t able to fold down the seat with the child seat installed, which is too bad but such are the perils of a compact package, I suppose.

I don’t think I’ll ever be able to get over the frustrating rear seat-folding mechanism in general, though. For starters, it’s a two-part process: first you flip the bottom cushion into the footwell, then the rear seatback down – which will only happen if the front seat is pulled far enough up, and way beyond what would be comfortable for taller drivers like myself. You can’t remove the headrests, either, so there’s that shortcut gone.

To put it simply: Don’t expect sports-car-like acceleration from your Encore. It comes standard with a turbo four-cylinder rated at 138 hp and 148 lb-ft of torque, fed either to the front wheels or to all four as the Encore is available in both FWD and AWD configs. Mine was AWD, which is good but it does add a little weight, which matters considering the moderate power output. Power that is eclipsed, meanwhile, by the likes of the Jeep Renegade, Lexus UX, and Volvo XC40.

Power is fed through a six-speed automatic transmission with a manual option, although the way you change gears – by pressing a button mounted atop the shift lever – is not the most practical or ergonomic choice, and I really didn’t use the feature all that much. There’s not enough power to inspire me to do so, and while it was fine to shift my own gears during steep climbs, it didn’t make much of a difference – the Encore struggled either way. At least the engine goes about its business relatively smoothly, which dovetails well with the quasi-luxury image of the Encore.

While the powertrain isn’t much to write home about, I did like the way the Encore handles. Ostensibly a crossover, it looks like a tall hatch and pretty much handles like one, too, with quick turn-in and a tight turning radius.

Since it’s tall and has a pretty short wheelbase, you will feel body roll if you go a little too aggressively into a turn, but without feeling like you’re at risk of tipping over. It stayed pretty planted through most anything I threw at it, and that extended far beyond the urban crawl where vehicles like this are going to be spending most of their time.

The good view out and short overhangs complement its agility, meaning threading your way through rush hour traffic downtown is that much less nerve-wracking. The ride is also well controlled; some harsher bumps and speed will cause a little bit of chassis bounce – a short wheelbase can do that – but I can count on one hand the times this really bugged me during my test.

As mentioned before, other than adaptive cruise, the Encore has pretty much everything you’d expect safety-wise for a car that starts around 35 grand. The forward-braking warning is notable, however, in that it’s one of the most noticeable systems I’ve seen. A set of bright flashing red squares is reflected off the windshield once it activates – which happens a little sooner than you might expect, and is no bad thing.

I spent most of my time in city driving during my test, when I saw a return of 11 L/100 km. I would have liked to see a number below 10 L/100 km for such a small vehicle, but I allowed for a margin of error due to the fact I was running high A/C during most of my test. It’s also nice that it runs on 87 octane fuel.

This is a toughy for the Encore.

Sure, it comes pretty well-equipped, but for all intents and purposes, this is a compact CUV with a few luxury airs – not quite enough to garner a near-$40,000 price tag, which is where my tester sat after adding just over $3,500 in options. Much of that cost came from the Experience Buick Plus package, which adds many of the safety features I spoke of earlier.

I wouldn’t mind so much if there was more of a return on the driving side of things, but it’s not quite there either, sitting somewhere in between a sporty and luxurious tall hatch.

The Encore’s balancing act speaks to Buick as a whole: It’s a brand sandwiched between Cadillac and Chevrolet at General Motors, and having to walk the line between the two is no small ask. I get that the Encore in particular is either aimed at a young, adventurous buyer or perhaps an empty nester that still has a fondness for the Buick name and wants a taller, more comfortable seating position than your typical sedan. I get that, but I’m not sure there’s enough here to make it stand out in either direction. Maybe next year’s Encore GX edge closer to the goalposts but for now, I see a bit of an identity crisis for the Encore. 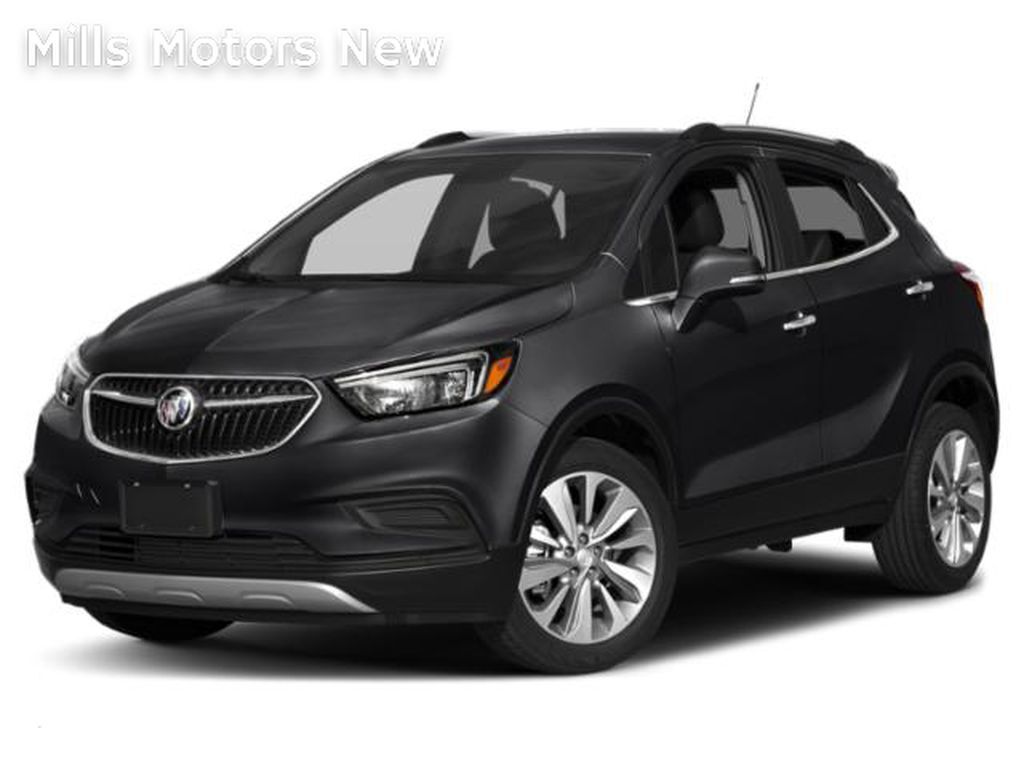