When people talk about the glory days of the horsepower wars, they need not refer back to the pre-oil shortage years of the 1960s, for the battle rages on with seemingly no end in sight. If the 717 hp of the “base” Challenger Hellcat simply isn’t enough for you, fear not, dear friends – there is an even more ferocious breed of cat that has ascended from the fiery depths of the netherworld.

About as subtle as an Elton John stage costume.

Approaching the idle 2019 Challenger Hellcat Redeye with red key firmly in hand felt a little something like sneaking up on a sleeping lion: The undisputed king of the jungle is capable of significant carnage should one take its great power for granted. It must be approached with equal parts fear and respect.

The Redeye can be had in either regular or optional Widebody configuration, which adds fender flares and competition suspension, wider (Devil’s Rim) wheels and tires for a cost of $8,000. Not only does it provide a more imposing visual presence, but also added stability in the turns. Yes, this muscle car can actually turn. Sliding behind the tilting and telescoping steering wheel of the Challenger immediately transports you to another time and place. A time of bell-bottom pants, lava lamps, and Led Zeppelin. Outfitted in Plum Crazy Pearl with the optional $1,500 black satin hood (with functional air scoops) and an SRT Barracuda spoiler, this Redeye is about as subtle as an Elton John stage costume. Attracting attention and suspicion from law enforcement, it also drew unmitigated disdain from respectable folks who seemingly resented their day being ruined by the rumbles and roars emitting from the 6.2L supercharged V8 – or the unintended squawks from the rear tires.

The Challenger comes with a small selection of standard safety features such as a rear camera, rear park assist, electronic stability control, multi-stage front airbags, and supplemental side-impact airbags. The Driver Convenience Group adds HID headlights and blind spot monitoring with rear cross-path detection (as well as body-coloured folding side mirrors) for $995, but no advanced safety features which is a rarity these days.

I’m not sure that the word practicality is in the Hellcat’s vocabulary. While the Pirelli P-Zero high-performance tires are categorized as “All-Season”, it’s no indication of how well it would fare in snow. Driving the car in heavy rain required a light right foot and the application of smooth, deliberate inputs to continue on in the right direction.

The Challenger does have four seats, although the rear seating area isn’t easy to get in or out of. The 569 L trunk is cavernous with a large opening to easily store big, bulky items. Not surprisingly, as it is right there in the name, the Widebody is wide. It makes parking at a supermarket or underground garage a stressful experience for fear of concrete wall scuffs and door dings.

Classic muscle cars, from which the modern Challenger descends, were quite apt at getting you into trouble but less capable of getting you out of it. Despite its impressive performance credentials and widebody stature, the Redeye is quite amicable and approachable as far as performance vehicles go – as long as you’re not being a meathead. The 8.4-inch display makes it easy to navigate through the various drive modes and infotainment menus while the steering-wheel-mounted buttons and HVAC controls are simple and intuitive.

Over the course of the week I never became familiar with the location of the inside door handle as it resides low down behind your left thigh. It also makes it impossible to exit the back seat without having someone open the door from outside. The steering-wheel-mounted paddle shifters are rather small and could be more substantial.

Predictably, many of the trick features on the Redeye improve or monitor performance in some manner – making it go faster, stop and handle better, or simply not blow itself up – features that typically aren’t available on your everyday passenger vehicle.

The Redeye gets a heavy-duty torque converter and dual fuel pumps, as well as the Power Chiller and the After-Run Chiller systems. Lifted from the Demon, they help keep things cool during heavy use and after shutdown. The SRT button brings up various programmable drive modes (selectable on the Uconnect screen) that can actually be felt by your right foot and the seat of your pants. Launch control and line lock are also available if you feel adventurous.

Power is not an area where the Redeye is remotely lacking in any way. This particularly potent brand of beast features a high-output 6.2L Hemi V8 churning out 797 tire-melting horsepower and 707 lb-ft of eyeball-flattening torque. While the regular old Hellcat has the option of a six-speed manual or eight-speed automatic, the Redeye is available only with the latter in the form of a TorqueFlite high-performance transmission. Retaining the rubber of the rear tires requires a gentle touch. Applying anything beyond a breath of throttle and the 305/35ZR20 Pirellis will light up like the Fourth of July in virtually any gear.

The Challenger is a big North American car for big North American drivers. The seats are certainly comfortable, but not overly supportive in the corners for someone with a slim, athletic build. The suspension is compliant and comfortable on uneven surfaces but is still firm enough to carve corners and not wallow too much in the turns thanks to multi-mode Bilstein adaptive dampening. Some body roll and a tendency to oversteer are just the nature of the beast. The back seat is spacious enough for kids or small adults for short periods of time but getting in and out takes some creative flexibility.

Piloting the Redeye is an exceptionally visceral experience. It demands your respect and attention, requiring both hands on the wheel at all times. Wheel spin happens easily and often. That being said, while power is sublime, abrupt, and unrelenting, it is also linear and predictable. The eight-speed TorqueFlite automatic transmission is nothing short of magnificent, changing gears precisely and quickly while transferring gobs of torque to the rear wheels with confidence. Brembo brakes, featuring six-piston fixed calipers up front, handle stopping duty well. It’s certainly not a corner-carving sports car, but it’s a lot more fun in the turns than I expected, or that its proportions would suggest.

I didn’t get anywhere near the claimed combined fuel economy number of 14.7 L/100 km, but let’s be honest – is a potential buyer of this vehicle even going to read this section? I could jot down my grocery list here and nobody would notice.

I certainly wasn’t expecting a fuel miser, but I was surprised to see the 48 L/100 km average fuel economy value flash up on the dash when I first fired up the beast. Thankfully I managed to get down to 21 L/100 km during my time with it, taking zero consideration for conservation and spending most of the time in Sport mode to harness the full 797 hp on tap. There are more economically friendly modes, but if you cared about them would you really buy a Hellcat? Didn’t think so.

The performance numbers and sticker price of this loaded-up Redeye may put it firmly into supercar territory, but unfortunately the interior is nearly indistinguishable from its $33,845 sibling. Only the seats and steering wheel centre identify it as something truly special. That is until you push the starter button, and all is forgiven.

It does feature 25 unique upgrades over its generic Hellcat littermate, including an SRT Power Chiller. First launched on the 840 hp Dodge Demon, the feature diverts air conditioning refrigerant from the cabin to help cool air entering the engine via heat exchangers in the supercharger. The After-Run Chiller continues to keep things cool after the engine has been turned off. These are big-ticket items that don’t come cheap and can’t be subsidized across other vehicles in the lineup.

The interior is in no way offensive, but unfortunately it is a bit plain and features some inexpensive-feeling plastic bits that are out of place on a car costing six figures. Foregoing some of the extraneous options vastly drops the price, placing the Redeye in a class of its own in terms of performance per dollar.

With nameplates like GTO, Chevelle, Belvedere, and Roadrunner a distant memory; and modern pony cars like Mustang, and to a lesser extent Camaro, becoming more refined in their focus and execution; the Challenger is truly the last of the muscle-car breed. Big, heavy, unapologetically loud and brash, the Challenger Hellcat Redeye personifies the singular purpose and over-the-top execution of a bygone era in a way that leaves its ancestors in the dust. As most manufacturers work diligently to make vehicles quieter, more civilized, and refined; the Hellcat Redeye flips its middle finger to the status quo.

Between the deep rumble to the all-out unmitigated roar emitting from the eager, active exhaust to the eerie, otherworldly whine of the supercharger and the shrieking of the rear tires, piloting the Redeye is unlike any other vehicle on the road. 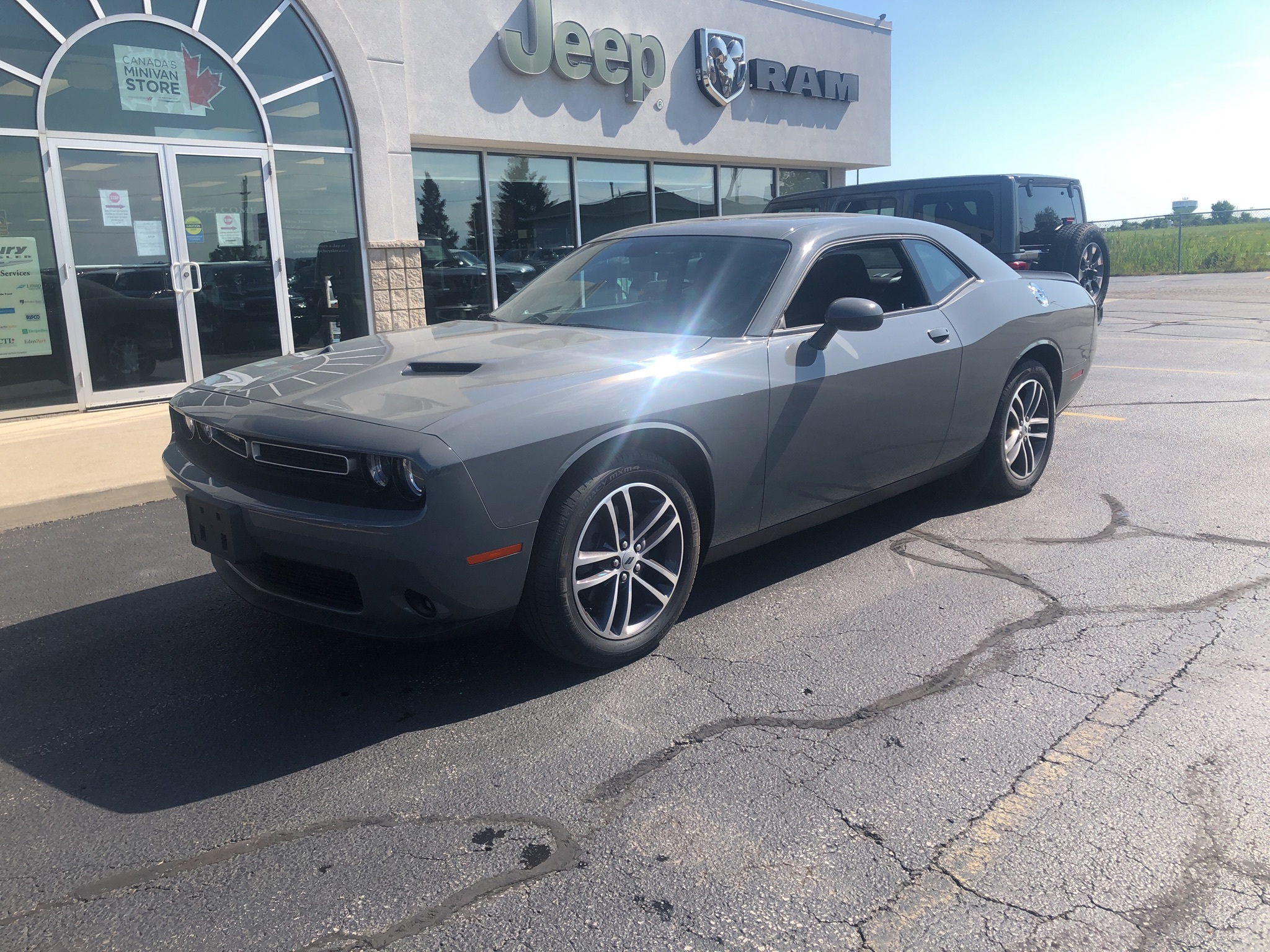 About Dustin Woods
Fascinated by anything with an engine since he was old enough to walk, Dustin has been crafting automotive news, reviews, and travel content for over 14 years. He holds an Honours Bachelor of Arts in Communications Studies and English from Wilfrid Laurier University and a post-graduate certificate in Broadcasting from Humber College. Dustin is the Associate Editor of autoTRADER.ca, a member of the Automobile Journalists Association of Canada (AJAC), and a doting cat dad.
Follow me
You may also like
8.2