While many manufacturers have all but forgotten about their car offerings in favour of SUVs, Mercedes-Benz can’t afford to do so.

For 2019, the brand-new Genesis G70 and completely re-done BMW 3 Series have the C-Class in their sights and are aiming for the top sales spots with dramatically improved machines.

Mercedes-Benz hasn’t sat idly by waiting for these new competitors, and has given the 2019 C-Class a host of updates this year. While we’ve evaluated it against its most formidable competition, the popularity of the compact Benz suggests it deserves consideration on its own.

The 2015 C-Class was a styling and luxury revelation within the entry level luxury segment. Where the 2014 model was angular and tired, the then-new 2015 car possessed a softer, more fluid design that drew a lot of family resemblance from the flagship S-Class sedan.

Interior styling was even more dramatic with opulent materials and properly artistic design flourishes garnering heaps of praise from media, and plenty of love from buyers.

The frequency of spotting a C-Class has increased its familiarity and diminished its visual impact. Likewise, competitors like BMW and Audi have upped their game making their offerings more stylish both inside and out, too.

Where Mercedes had an opportunity to dramatically update the now four-year-old design, it instead made more subtle changes. Most obvious, the front grille does away with the pair of striker bars in favour of Benz’s diamond grille pattern. The upgraded LED headlights have multiple lenses and look like they’ve been pillaged from an Acura, but do provide sensational, and highly adaptive, illumination.

The rear lighting elements have been formed to make “C” shapes beneath the red plastic covers.

The 18-inch AMG wheels fitted to my test car have a new aerodynamic lip that mimics the designs used on the Mercedes’ race cars in the European touring car campaigns. While it may provide a minuscule improvement in efficiency, it’s not a very attractive wheel and would have me skipping splashing out on the nicer 19-inch offering, if I were buying.

The technology being applied to cars these days is happening at such a torrid pace, that it can be tough to keep up with it all.

Heading toward greater automotive autonomy, the C-Class offers Mercedes’ Intelligent Drive applications that provide the usual emergency stopping functions and adaptive cruise control, but it can also automatically slow down for exit ramps or even toll booths. Likewise, it can even change lanes with a tap of the turn signal stalk.

This C 300 was outfitted with a nice, dual-pane sunroof, heated steering wheel, wireless charging, active parking assist, and a power trunk lid closer, helping to give a properly luxurious feel to my tester. Buyers will, of course, pay for all of those niceties, each as part of various costly option packages.

The C-Class finally gets Apple CarPlay and Android Auto functionality; however, the Comand infotainment system’s updated 12-inch screen still does not have touchscreen functionality, so it takes some practice to get used to using those familiar operating systems with an unfamiliar interface.

The touchpad controller and rotary knob work well enough for the rest of the Comand functions and the menus are straightforward with bright, crisp graphics. Volume is controlled with a rotary wheel near the controller interface.

The climate control flows through five large, round vents and is easily manipulated with a series of toggle switches on the dash.

Mercedes has long used door-mounted seat controls with buttons shaped like seats that make for easy operation. But the steering-column-mounted gear selector stalk takes some getting used to, and I always fear that I’ll go to use the wiper switch (which is on the turn signal control), and shift into reverse at 100 km/h. 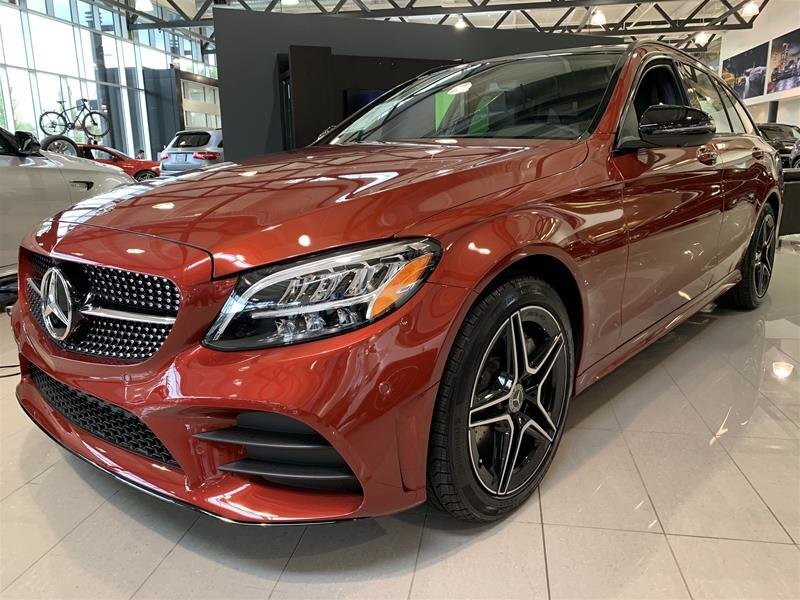 The finishes throughout our C 300 were properly luxurious. The open-pore walnut trim looked rich and the soft-touch materials, metal accents, and silk beige leather unite for a pleasing cabin.

The sport package suspension wasn’t as supple as some Benz buyers are likely to expect, and I found the seats to be wide, flat and not as comfortable as I would like, particularly in such a costly machine.

Rear seat space is not generous, but on par with most other cars in this class.

Accessing the rear seats is almost comically challenging. The roofline rake is so steep and the rear wheel well intrusion so severe, that a shocking amount of body contortion is required to gain access.

The rear seat on my tester was divided into a 40/20/40 split with only a small pass-through available in the “20” section. Without having the seats fully foldable, functionality is significantly limited for the cargo hold which measures a reasonable 480 L.

The engine in the 2019 C 300 is all new, right down to the block. It still displaces 2.0 litres through four cylinders, and provides a competitive 255 horsepower and 273 lb-ft of torque from a relatively low 1,800 rpm. While the thrust is adequate, the little four-cylinder is quite coarse. Inside the C 300, the noise is not overly intrusive unless the revs get quite high, but outside the racket sounds more like a small garden tractor than a premium sedan.

Piped through the standard nine-speed automatic transmission, the all-wheel-drive C 300 4Matic puts its power to the ground efficiently and provides what will surely be adequate thrust for most buyers. Those wanting more can spend up to a C 43 sedan with its twin-turbo V6 and significant power bump.

Dimensionally, the compact size of the C-Class helps it manoeuvre nimbly around town, and change directions quickly and effortlessly out on the backroads. The steering is light, though it lacks feedback; giving little tactile information as to what the tire contact patches are up to.

The C 300’s brakes were a little grabby, but otherwise provided strong and linear braking power with good pedal feel and modulation.

The C 300 is a capable performer, but lacks the sporting edge of some of its competitors. The engine’s vibrations are felt more than heard, but either way, still do not feel fully appropriate for a car of this cost. What’s more, although the Benz leans more toward the luxury side than the sporting, its ride is moderately stiff with the sport package.

This C 300 featured a multitude of highly active safety functions designed to keep the car and its occupants safe while on the road. In addition to the usual litany of airbags and passive safety structure, the C-Class puts its radar and camera sensors to good – and near-constant – use by scanning ahead, beside, and behind the car to help anticipate potential problems, and if necessary, react to them.

Mercedes has also extended its Active Brake Assist (which is now standard on the C 300) that can help slow or stop the car to avoid contact with other vehicles, whether parked or moving, as well as pedestrians and cyclists.

The active steering assist functions help the C 300 maintain its lane positioning, but also helps mitigate the effects of crosswinds pushing the car around.

With its new 2.0-litre engine, nine-speed automatic and auto stop-start functionality, the C 300 4Matic delivers mid-pack fuel efficiency with a combined average rate of 9.4 L/100 km. BMW’s new 330i and Audi’s A4 each achieve better figures than the Mercedes, which also ties with Volvo’s S60 sedan, though the latter delivers significantly more power and torque than the Mercedes.

At first glance, a C 300 4Matic for the $46,100 base price seems like a pretty great deal. However, the options very quickly add up and while my tester was well-equipped, it possessed very little aside from the coveted three-pointed-star badge that isn’t also found on most of the competitors’ cars, often for a few thousand less.

The Mercedes-Benz C 300 4Matic is a fantastic machine when evaluated on its own; its updates for 2019 are generally appreciated. However, the competition is more formidable than ever before, and equipping the C 300 with the features most buyers expect in a luxury car sends the sticker price steeply rising. With mid-pack fuel efficiency and driving dynamics compared to the latest and greatest competition in the compact luxury car segment, the C-Class’s position as the segment sales leader could be in jeopardy.

About Jeff Wilson
Jeff has been an automotive and motorcycle journalist for nearly a decade, but his passion for cars and bikes stretches back to his childhood. A member of AJAC, Jeff has also served on its board of directors, and has won multiple awards for both his writing and photography. When chasing his automotive dreams, Jeff also divides his time between being a father and a television producer with an internationally acclaimed, Emmy-nominated production team.
Follow me
You may also like
Latest Articles
﻿