CALGARY – Redesigned sports cars and luxury models get all the attention when they’re introduced, but the reality is that most driveways are populated with mainstream models. All-new versions of these everyday autos – in this case, the 2020 Toyota Corolla – are what really drive the auto market when they land.

The all-new Corolla Hatchback hit the market last year. Now, it’s followed by an equally new Corolla sedan that comes with a choice of two engines, and – for the first time in Canada – a Corolla Hybrid.

The Corolla’s importance to Toyota can’t be overlooked. While the Camry tops all car sales south of our border, up here, the Honda Civic and Corolla are perpetually locked for the one-two positions among anything that isn’t a truck or SUV.

As with the hatchback, the sedan and hybrid ride on a new platform, known as the Toyota New Global Architecture. It’s 60 percent stiffer than the outgoing model, and has a new multi-link rear suspension in place of torsion-bar, both of which translate into a smoother ride.

The conventional sedan is split into two lines, starting with the L line, powered by a 1.8L four-cylinder. It’s the same engine that was in all Corolla models last year, but with a bump in horsepower to 139 horsepower, up from 132 horses, and with 126 lb-ft of torque.

The S line uses a 2.0L four-cylinder, making 169 horsepower and 151 lb-ft of torque. The Hybrid, meanwhile, borrows the Prius’ powertrain, with 1.8L engine and electric motor that combine to produce a total of 121 horsepower – and a combined city/highway fuel rating of 4.5 L/100 km. It uses an electronically controlled CVT.

The Hybrid comes in two trims: the base is $24,790, while the Premium Package is $26,790. Both the regular and hybrid models are already on sale.

The car looks good: it’s lower and wider than the outgoing Corolla, with wider front and rear tracks, and sharper body creases. I think that, in comparison to its predecessor, the best description is that it looks more robust. All models get LED headlights and taillights. What I really like is that the hood is lower, there’s a little front quarter window, and the mirror is now mounted on the door, all of which give you excellent front and side visibility. 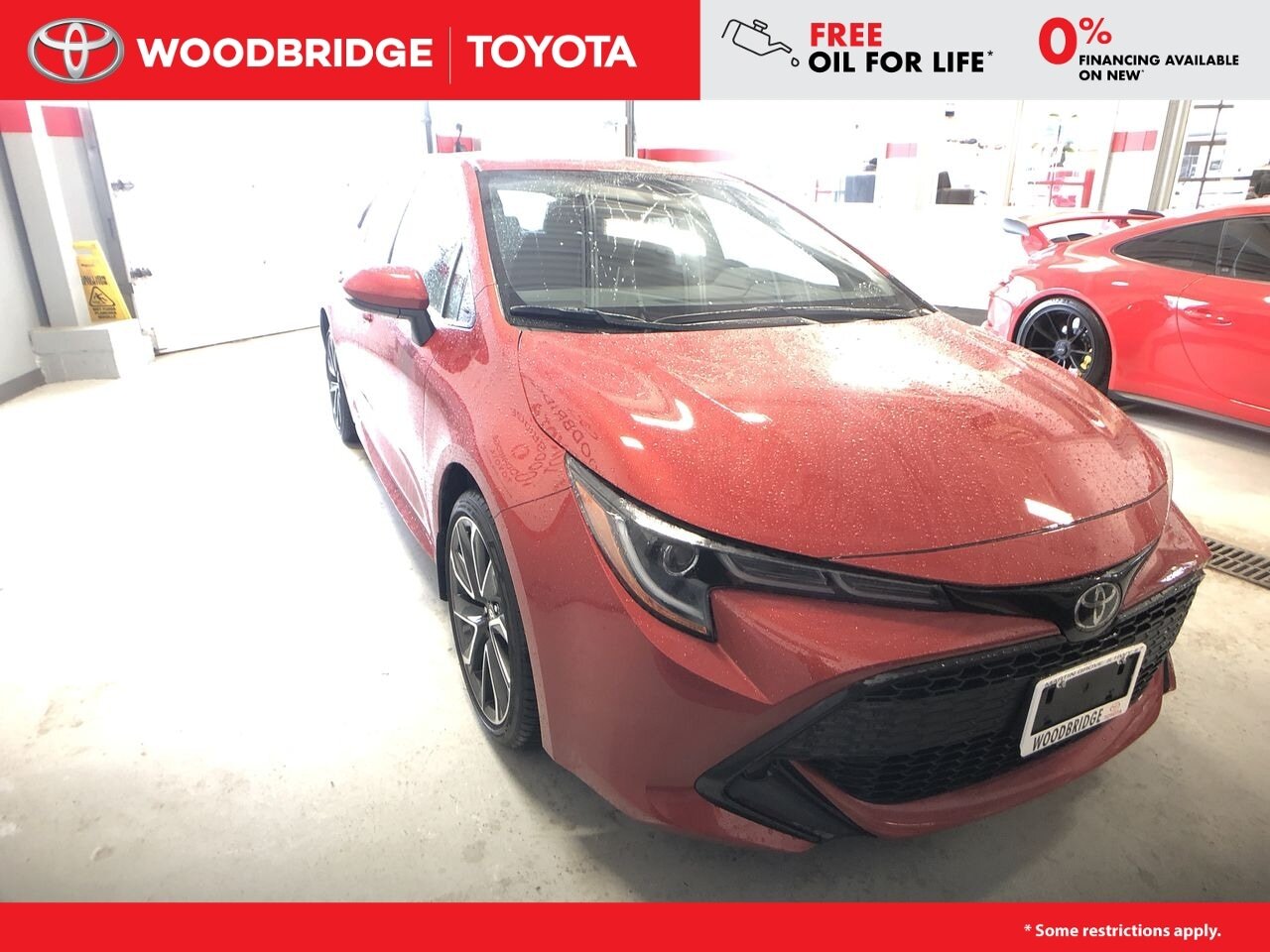 The interior is simple, bordering on stark, although the soft-touch and stitched dash on the SE Upgrade I drove softened the look a little. I’m also not entirely sold on the infotainment tablet – 7-inch on the base L, 8-inch on everything else – which is stuck high on the dash like it’s been glued on. Automakers generally do this for two reasons: it raises your line of sight, so you still see the road while you’re looking at the screen; and because it doesn’t require a lot of real estate in the centre stack, the dash can be lower, which makes the car look roomier.

The chairs are quite comfortable for this segment, and I like that the cushions are long enough to reach the backs of my knees. Shorter cushions mean less support, which can contribute to a sore back. The rear seat has a lot of legroom for the car’s size, too.

All trim levels come with air conditioning, operated by automatic temperature control on everything but the base L. All models also come with Toyota Safety Sense, which includes emergency braking, automatic high-beam headlamps, lane-keeping assist, and adaptive cruise control, which on all but the entry trim operates at low speeds as well. Apple CarPlay has finally been added, but Android Auto is yet to come.

Moving up the trim ladder, you can get such items as a heated steering wheel, leather upholstery, heated rear seats, push-button start, sunroof, and wireless device charger, although it occupies the cubby in front of the shifter, and leaves you with next to no small-item storage.

With the conventional Corolla, the automatic transmission you get depends on the trim level. Most get a regular CVT, but the top-line XSE uses a direct-shift CVT, an unusual little beast that starts off with a first gear for a more conventional feel, and then switches to continuously variable operation – I didn’t get to try it for myself, however.

I spent the morning in the SE with six-speed manual transmission and upgrade package, ringing in at $22,290. In many cases, automakers shove a ho-hum stick-shift into the base model solely so they can advertise a lower price – but not here. This one’s fun, with a light clutch and a shifter that snicks crisply into each gate. The version on the SE includes an electronic feature that rev-matches on downshifts, too, but you can turn it off if you prefer to heel-and-toe yourself.

The 2.0L engine does its job smoothly and quietly, and the car is tight and solid. It doesn’t feel as sporty as the Honda Civic or the Mazda3, but that’s not a slam. There’s a substantial audience for something that’s more about being smooth and comfy, and the Corolla’s going to hit it between the eyes.

I spent the afternoon in the Corolla Hybrid, where the Prius’ driveline is an excellent fit. As in the Prius, it switches automatically between gasoline, electricity, or a combination as needed; and uses regenerative braking to self-charge the battery. (Will we see a plug-in version based on the Prius Prime? The best I could get out of a company rep was, “Well, anything’s possible.”)

The styling differences between it and the conventional Corolla are minimal, for those who want a hybrid powertrain but don’t want the car to scream that it has one, as the Prius does. The battery’s located under the rear seats, so it doesn’t grab any trunk space. Despite the extra weight back there, the car is well-balanced, with the same smooth ride as the regular Corolla, a tight turning circle, and a very quiet cabin.

The old Corolla was a good car, but this one is that much better. I’m not entirely stuck on the dash design, but beyond that, it’s hard to fault this compact sedan. It’s very comfortable to drive, it’s roomy inside, and the price is reasonable, especially in the mid-level trims. And you can get a stick shift if you like – Toyota says that 10 percent of Corolla Hatchbacks are sold with them – one that’s actually fun instead of a cost-cutter. The company estimates it’s going to sell 40,000 Corollas this year in Canada. With the job it’s done updating this one, that definitely sounds doable.

About Jil McIntosh
Jil McIntosh writes about new cars, antique and classic cars, and the automotive industry. A member of the Automobile Journalists Association of Canada (AJAC), she has won several awards for her writing, including Journalist of the Year in 2016. In addition to testing new vehicles, she owns two from the 1940s.
Follow me
You may also like
AdChoices
Latest Articles
﻿