Have you ever noticed how many Honda CR-Vs there are on Canadian roads? Not only are the Alliston, Ontario-built fourth-generation and newer cars prevalent, but it’s not uncommon to see first- and second-generation vehicles, complete with exterior-mounted spare tires, cruising our highways. And when those long-lived workhorses finally bite the dust, where do you think those drivers will head? Straight back to their local Honda dealerships, of course. But if you’re looking for a Canadian-built, Japanese-badged crossover and you’re feeling open-minded, the 2019 Honda CR-V isn’t your only capable, rugged-looking option. Depending on what you need and want, long-time rival Toyota RAV4 might just be a better value for your money.

The best value comes at the EX trim, which includes 18-inch wheels, standard all-wheel drive, and most of the safety features buyers seek out.

Touring, but only if I really had the budget room for niceties like a panoramic sunroof, onboard navigation, and a memory driver’s seat – although it’s surprising that it takes this much spend to get rear cross-traffic monitoring.

Six months ago, I’d be using this space to tell you that the CR-V was your best choice if a squared-off, upright, tough-looking compact SUV was your preference. Today, I think the once overly sleek Toyota RAV4 has blown past it with the latest generation’s transformed and unabashedly rugged appearance. The CR-V looks pedestrian in comparison – maybe, if I dare say so, even slightly Neanderthal with its extended lower front fascia – to the point where it will be very interesting to see what direction Honda takes when the next redesign hits.

In this regard, Honda pretty well always rises to the top of the heap. Between a high and flexible amount of cargo space and in-cabin storage, front and available second-row USB charging ports, a highly adjustable centre console with a sliding and removable cover, a good number of well laid-out cup holders, and large and easy-to-read gauges, in the CR-V it seems as though the designers though of just about everything.

Although it needs to be said that the new Toyota RAV4’s outright power figures are higher, most people shopping for a compact SUV will find that the CR-V’s 190 hp and 179 lb-ft of torque do the job just fine. Still, the RAV4 not only comes in hybrid configurations, but they drive far better than this without bringing a huge cost penalty, aided by the fact that Toyota has added a starter gear to its CVT. Honda’s still goes without, and it’s sluggish and buzzy off the line as a result.

The 1.5-litre turbocharged four-cylinder engine that’s standard across the board in the CR-V triggered no-charge product updates and extended warranties across the country late last year because cold-weather running was causing excess fuel vapours to mix with and dilute engine oil. The problem is said to be resolved and the fix should be applied to all 2019 vehicles equipped with the engine, but it’s still an important situation to be aware of when making a purchase.

For the most part, the Honda CR-V is packaged well for its various price points. Apple CarPlay is standard, but so is Android Auto, which the RAV4 doesn’t have available at all.

The CR-V’s best value is at the EX trim, where all-wheel drive is included in the price, the upgrade from 17-inch to 18-inch aluminum alloy wheels becomes standard, numerous safety features are included as outlined below, and a pair of rear USB charging ports is equipped, among other things. If seating features like front-row power adjustments and a driver’s seat memory function are important to you, look to the EX-L, where you’ll also get heated rear outboard seats and steering wheel and SiriusXM capability.

Some features require investing in the Touring trim, including LED headlights and taillights, roof rails and a panoramic moonroof, a dual exhaust with chrome tips, and on-board navigation. 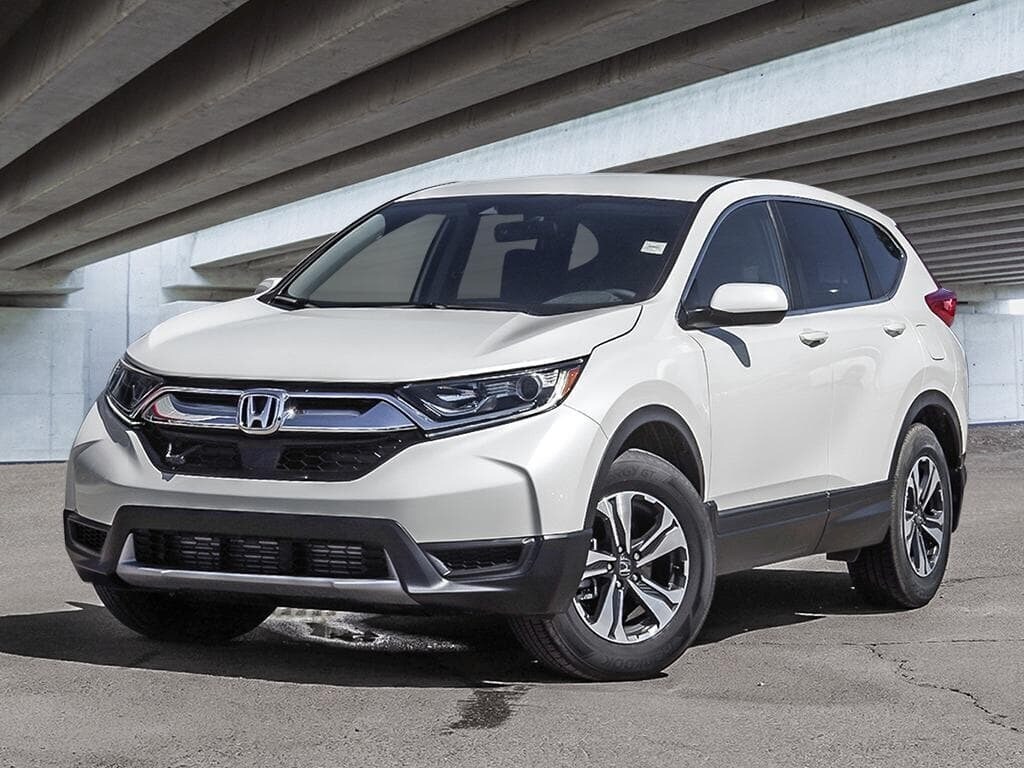 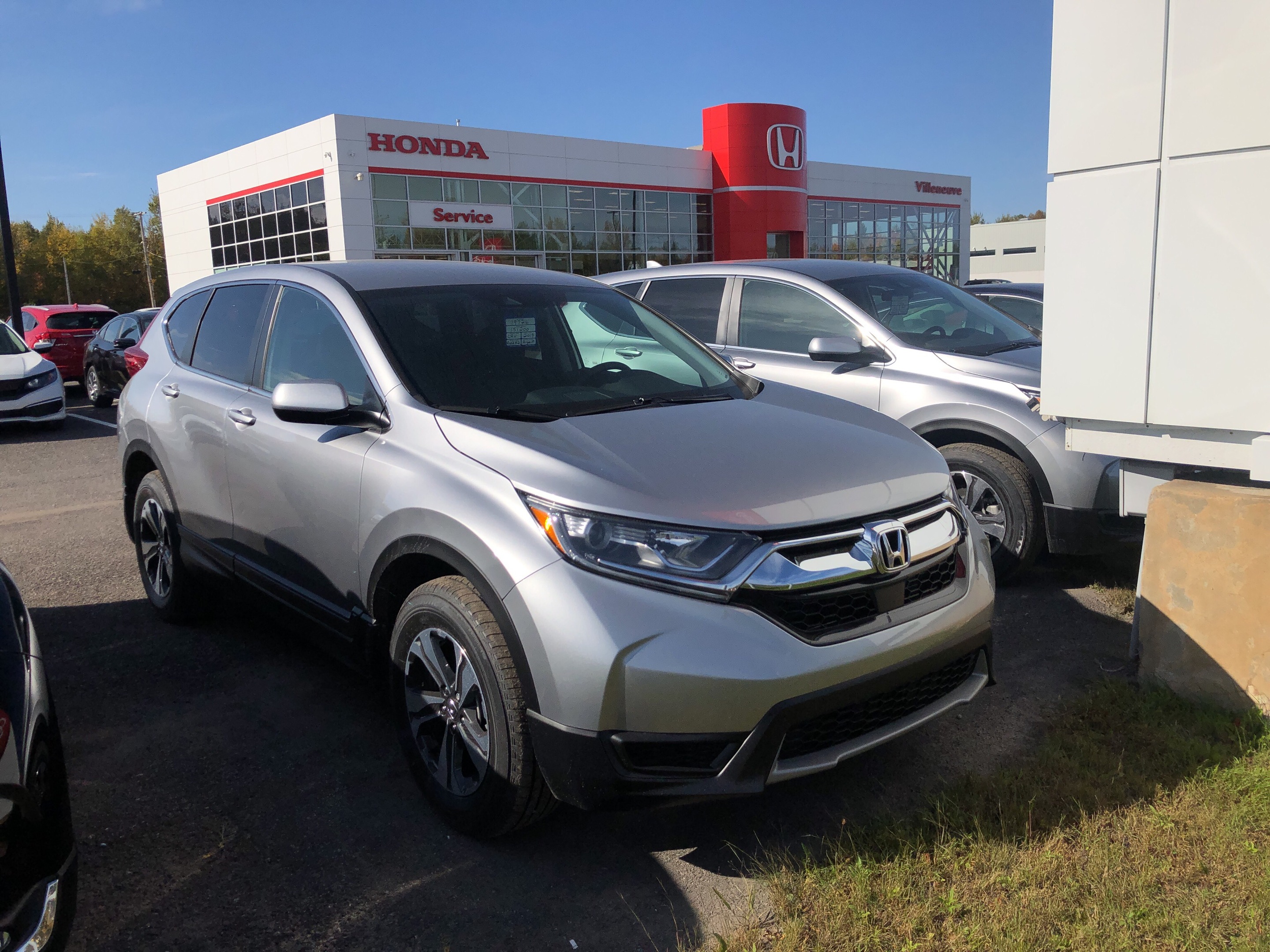 The best interior in the CR-V is fine, fitted well with quality perforated leather, but on deeper examination there are two things that might grate on an owner over time: one, there’s a lot of layering going on that could start to look dated as competing interiors become more minimalist; and two, the wood-look inserts, while convincing, are artificial and leave no question of that upon the first touch. That said, there are several aspects of the interior that add to the CR-V’s practicality as outlined above, including the clever centre console and well-considered cup holders.

The gear shifter, which still has a traditional stick layout here as opposed to the push-button configuration that’s becoming prevalent in the Honda lineup, does takes up a lot of space – although my OCD side appreciates that it’s centred – but whether the space it takes up is worth the familiarity is very much in the eye of the beholder.

Overall, the on-road dynamics of the CR-V may not be very exciting, but they are predictable and pleasing, which is what most people shopping in this segment will prioritize. It rides and handles well, staying flat and composed even over rougher roads. The steering feel is perhaps a little vague, but that can be an upside for easygoing drivers who like to have a little leeway.

For the balance of drivability and features, the pricing of the CR-V is acceptable, not exceptional. The new RAV4 has a lot more variability in its price, but if you can afford to accommodate one of the hybrid models into your budget, you may just find that the difference in power delivery and fuel costs is enough to justify the added expense.

Automated 911 emergency calling is standard on the CR-V, which dials emergency services without occupant intervention if a collision takes place and a phone is paired, and the driver attention monitor system is standard equipment as well. On top of that, the EX trim is again the value leader here being the point where auto high-beams, forward collision warning and collision-mitigation braking, and lane-departure warning and road-departure mitigation are included without an added cost.

That said, the Toyota Safety Sense 2.0 makes some of these features standard equipment on the RAV4 – but not the emergency calling. To my mind, that’s a standout feature and one of the most underrated safety options on the market. Oddly, to include rear cross-traffic alert on a CR-V, it’s necessary to go all the way up to the Touring trim.

For a gas-powered crossover, the CR-V is relatively fuel-efficient: I finished at 9.3 L/100 km over a week of testing versus the NRCan combined estimate of 8.0 for this 1.5-litre turbocharged four-cylinder, though it happens that I spent more time than usual in traffic, enough so that I was happy with that result. Again, though, the new Toyota RAV4 comes in hybrid models that have a more pleasant drive feel and cost less at the pumps.

If you’ve been a Honda owner for years, you’re probably going to buy another one no matter what anyone says. And if you need to buy right now, the CR-V isn’t a bad option at all since the RAV4 in any configuration is very new and untested. After it’s been given a few months to shake out, though, I’ll be more inclined to steer people toward the RAV4’s hybrid models, at least until the next-generation CR-V lands and we see whether the bar is lifted yet again.

About Stephanie Wallcraft
Stephanie Wallcraft is the child of an auto worker and honed her passion for cars in the grandstands of the Molson Indy Toronto. Today she continues the family tradition by writing about cars and motorsport for publications across Canada.
Follow me
You may also like
7.9