Toyota’s littlest hybrid is showing its age in some aspects, but overall, the 2019 Prius c is a funky little machine that’s well-sized for the city. There are several higher-tech safety items as standard equipment, and for 2019, pedestrian detection is added to the pre-collision emergency front braking system. The optional Technology Package is also broken into two for 2019, with one minus the moonroof that used to be mandatory (and a bit pricey) if you wanted everything else in the package. It’s the least-expensive hybrid Toyota sells, but it looks like this might be the last year for it, so if you want one you better hurry.

Although it shares its basic bones with the Yaris hatchback, the handsome Prius c carries its own styling that also differs from the larger Prius. I think it’s a well-proportioned little thing, with a nose that’s better-looking than on the Yaris. At the rear, the taillights frame a liftgate that’s set down far enough that most people will have little trouble lifting groceries and other items over the bumper.

Something this small always has its limits, but the Prius c does quite well for its small footprint. It’s fairly roomy in the front seat, and while it’s tight for rear-seat passengers, there’s space for them to slip their feet under the front chairs for a bit more comfort.

The cargo compartment is 484 litres, and the hybrid battery doesn’t steal much in the way of extra space. Because the battery is self-charging, the Prius c never gets plugged in, a bonus for those who don’t have easy access to a charging plug.

The Prius c uses a 1.5L four-cylinder engine, mated to a hybrid system with nickel-metal hydride battery, and with a continuously variable transmission (CVT). How much bragging you’ll do about what’s under the hood is up to you: the engine itself puts out just 73 horsepower and 82 lb-ft of torque, and when gas engine and electric motor work together, they produce a combined 99 horsepower. The electric motor is rated at 125 lb-ft of torque.

It’s probably been a long time since a car has put out such small horsepower numbers, but on the other hand, that engine is only pushing around some 1,147 kilograms of Prius c. It’s not particularly quick, but it’ll get you where you’re going. 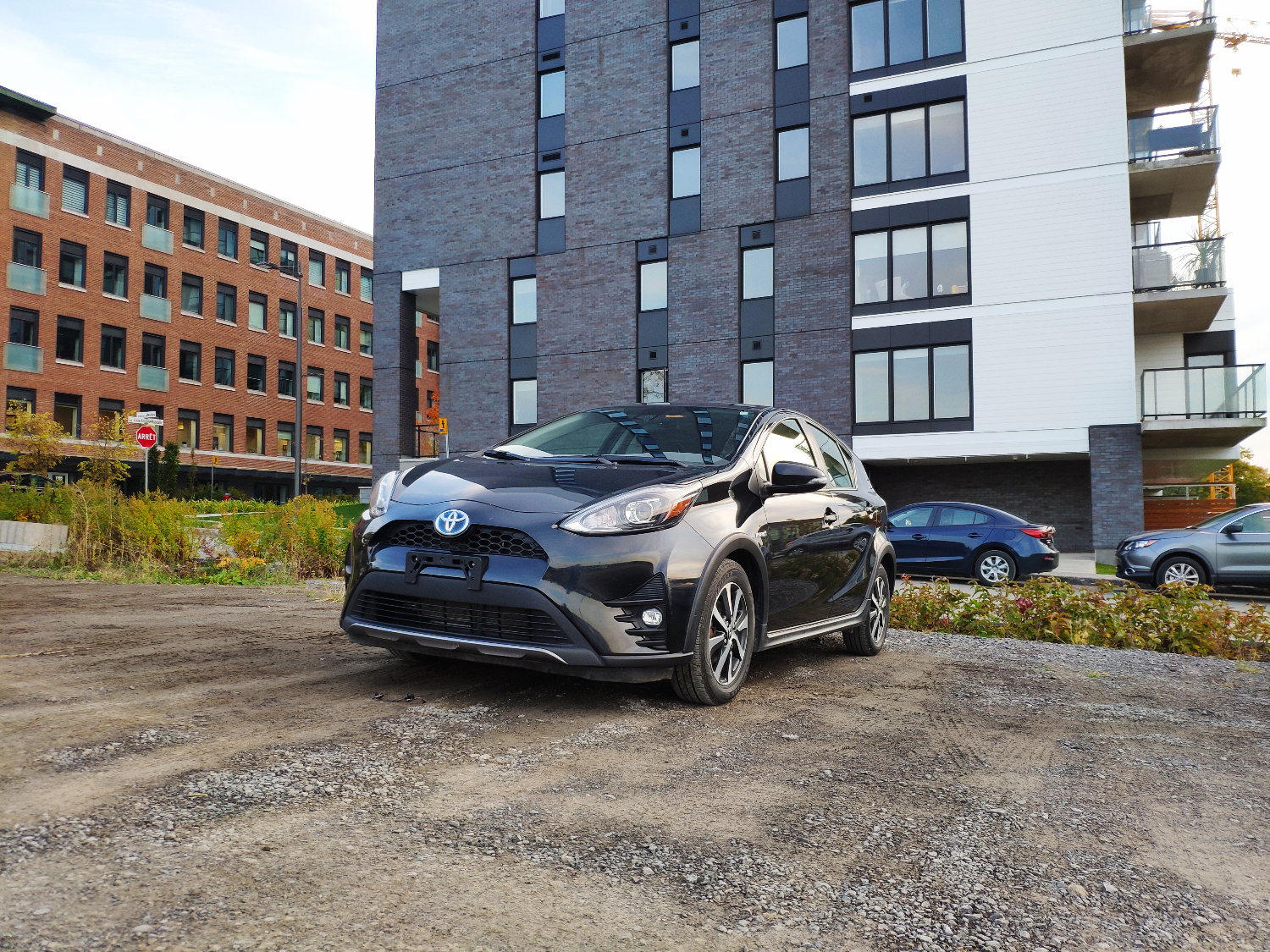 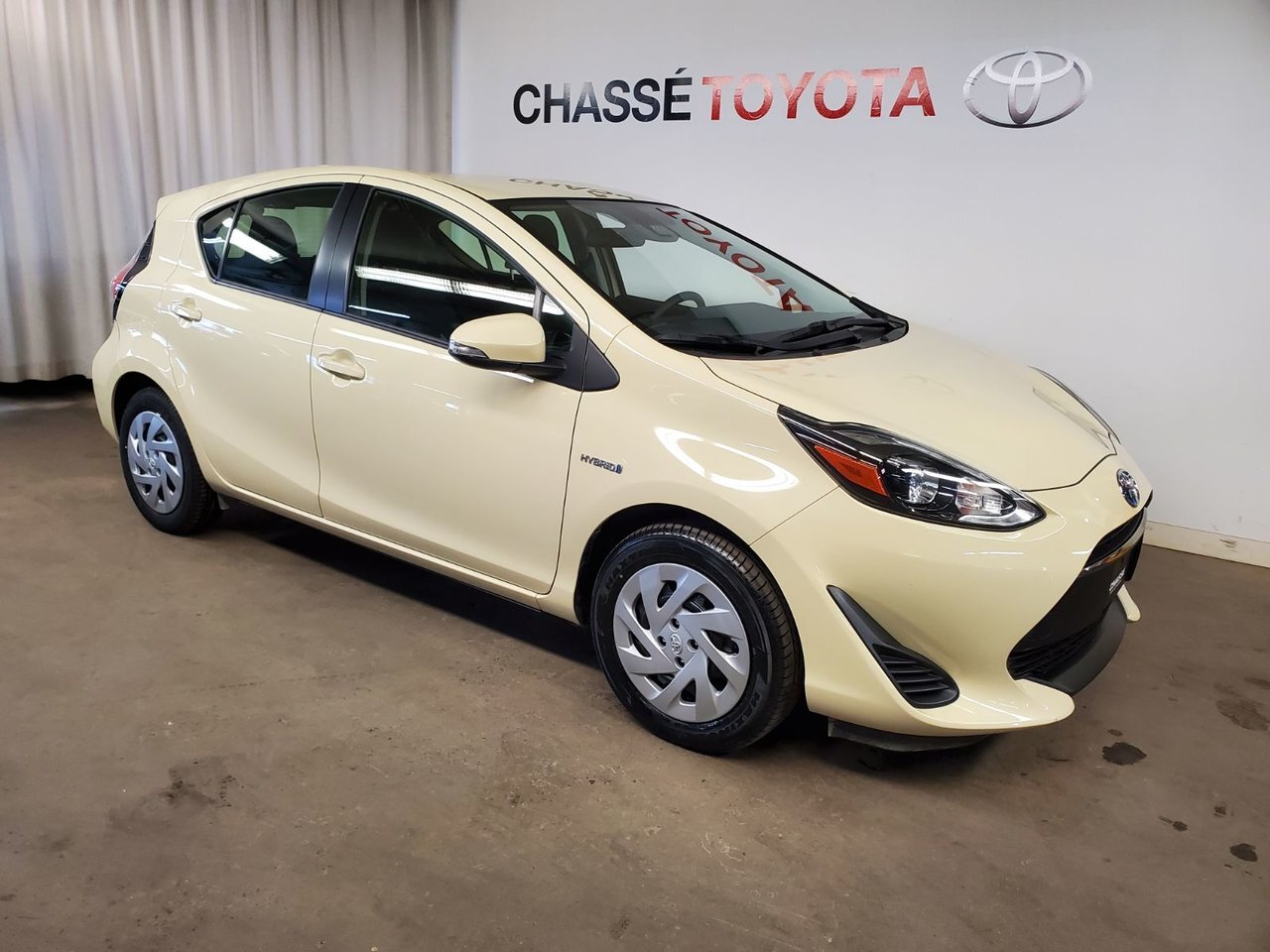 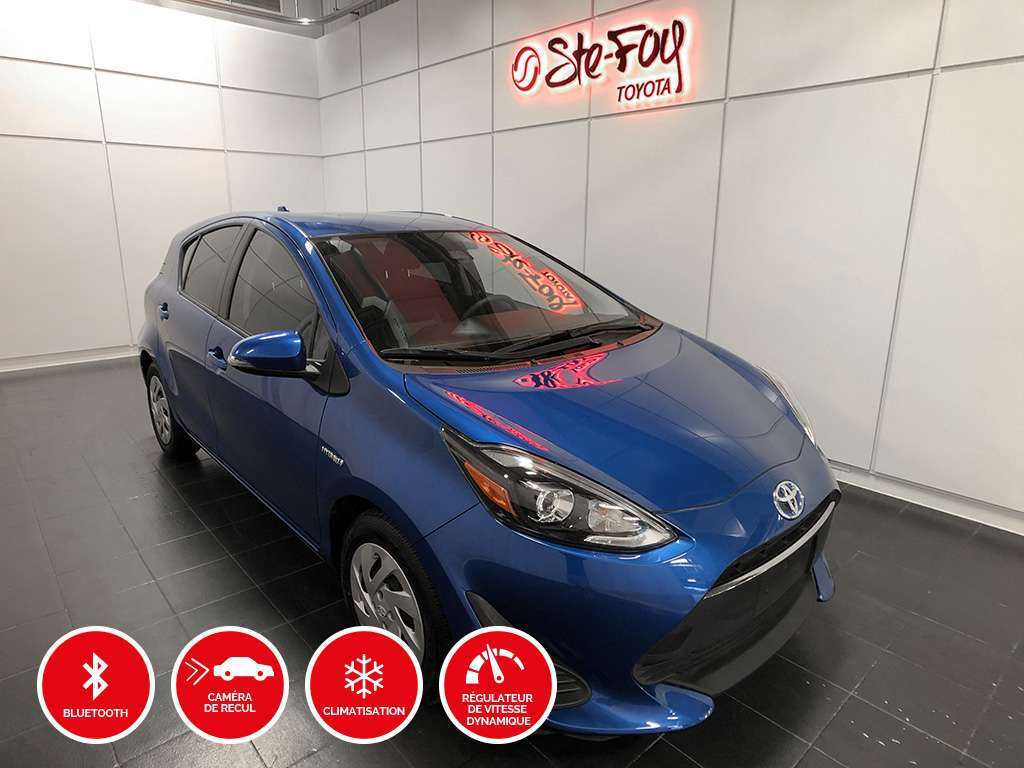 The Prius c’s funky dash features an asymmetrical centre stack – which I like – and a mid-mounted instrument cluster, which I don’t. I prefer looking ahead rather than slightly sideways to check my speed. There’s a fair bit of small-item storage space, including an open cubby in front of the passenger (great for stashing gloves in winter), a narrow bin in front of the driver, large door pockets, and a cubby ahead of the cupholders.

Most of the controls are very easy to use, including large dials and switches for the climate, and vents that you can grab and spin to direct airflow. There are hard buttons to access some of the touchscreen controls, and the icons within it are straightforward. However, the screen itself has an almost soft-touch feel to it, and at times it can take two or three taps (especially if it’s cold) before it’ll actually believe you want something to happen on it.

Along with not being too impressed with the touch-touch-touchscreen, I did find that for the price of my tester, the interior had too many cheap-looking hard surfaces. I don’t expect a Lexus interior, but a Prius c loaded to $27,090 shouldn’t feel like a lower-trim Yaris.

With this car, you have to take the good with the so-so. On the minus side, despite its light weight, the Prius c is still only putting out 99 horses. You need to plan your highway passing and merging, and obey the “Slower Traffic Keep Right” signs when you’re going up hills. And the drone of the CVT when you put your foot into it just makes it feel that much more anemic.

On the other hand, in much of your everyday driving, the Prius c can be kinda fun. It responds promptly to steering input, it’s got a very tight turning circle, the handling is nimble, and the ride is firm but more than acceptable. It’s more for city trips than long-distance driving, and it does very well at squeaking through tight traffic and into tiny parking spaces.

The Prius c runs on gasoline, electricity, or a combination of the two, automatically switching between them depending on the driving conditions. There’s an “EV” button that is supposed to keep it on electric-only below 40 km/h for the better part of a kilometre, but I’ve never understood why Toyota includes it. If your foot is light enough the car will do that on its own, and even if you’ve pressed the button, the system will override it and bring in the gas engine if you’re too hard on the throttle.

The Prius starts at $22,260 for the base trim line. The new Technology Package brings it to $26,170, while going whole-hog with the Technology with Moonroof Package, as my tester was equipped, is $27,090.

That’s not bad for a hybrid overall, since the Prius starts at $27,990; it’s $29,850 for the larger Prius v, and the Prius Prime plug-in hybrid starts at $32,990. But I’ve often said that you buy a hybrid to save the planet, not your wallet. The similarly sized (but non-hybrid) Yaris runs from $15,690 to $19,665. You’ll have to figure out your driving habits to see how long it’ll take the fuel savings to make up the price difference between the Prius c and Yaris.

The Prius c rates four out of five stars for front and side crash, and rollover, from NHTSA, while the IIHS rated it “Good” for moderate front overlap, side crash, roof strength, and head restraints; and “Acceptable” for small front overlap and ease of use for its child anchors. Having the lane-departure, pre-collision and auto high-beams on every trim level is a bonus, given that these are sometimes missing on entry-level models. A rear-view camera is included, but that’s now mandatory on all new vehicles.

The Prius c officially tallies up 5.1 L/100 km in combined city/highway driving. Because they have more opportunity to run on battery alone at lower speeds, hybrids get better fuel economy in the city than on the highway – the opposite of a gasoline vehicle. In my week with it, which included two longer highway drives, I averaged 5.8 L/100 km.

Although it’s larger, the new Prius does much better with its improved technology, and rates 4.4 L/100 km – but you’re back to that price-of-car vs price-of-fuel equation, since the Prius is a more expensive vehicle. At the other side of the calculations, the lesser-cost Yaris rings in at an official 6.6 L/100 km in combined driving.

Considering that it’s nearing the end of its lifespan – its spot will be taken by the upcoming Toyota Corolla Hybrid – there’s a good chance you can probably negotiate a deal on the Prius c as dealers will be trying to move them off the lot. It’s no powerhouse, but it’s fun and funky, and it’s less than a Prius. Give it a test drive and see what you think.

About Jil McIntosh
Jil McIntosh writes about new cars, antique and classic cars, and the automotive industry. A member of the Automobile Journalists Association of Canada (AJAC), she has won several awards for her writing, including Journalist of the Year in 2016. In addition to testing new vehicles, she owns two from the 1940s.
Follow me
You may also like
7.1