Just when you might’ve concluded the victory of SUVs over sedans was complete, along comes something like the 2019 Kia Stinger. The Stinger isn’t the first of the modern five-door “sportbacks” – Audi’s A7 and Porsche’s Panamera get credit for that. But what Kia has managed to do is bring the sportback to the mid-market, and do it well enough to pick up the 2019 AJAC (Automobile Journalists Association of Canada) “Car of the Year” award.

It’s certainly a well-deserved win: In addition to being good old-fashioned fun to drive, the Stinger offers a handsome exterior, excellent driving dynamics, and a nicely appointed interior with an impressively big cargo area that rivals (and in some cases bests) that of similar-sized SUVs.

Initially introduced for 2018 with a sweetly powerful V6, for 2019 the Stinger is now available in GT-Line trim with an arguably more practical (and certainly somewhat less expensive) 2.0L turbocharged four-cylinder, which is the car I tested.

The turbo-four cranks out 255 hp at 6,200 rpm and 260 lb-ft of torque starting at 1,400 rpm, and for the Canadian market is hooked up to a standard-equipment eight-speed automatic transmission and standard all-wheel drive. It’s enough power to hustle the car from zero to 100 km/h in six seconds flat, about a second off the pace of the V6-powered Stinger.

The GT-Line may be the base model in the Stinger lineup, but it doesn’t skimp on interior appointments. The upholstery is perforated leather, with properly supportive heated power-adjustable front seats, standard-equipment heated steering wheel, and nice-looking soft-touch materials everywhere above the cockpit centreline. I particularly liked the triple centre vents, which look very ’60s Ferrari.

The outboard rear seats offer good leg room, although headroom is at a bit of a premium for those over about 5'11". That said, I had no complaints from my rear-seat passengers, one of whom is just over 5'10". Behind the rear seats is space for 660 L of cargo, which expands to 1,158 L with the seats folded (though it’s worth noting they don’t fold entirely flat).

Controls are logically laid out, and Kia’s infotainment interface (which includes Kia’s UVO connected car services) is one of the more intuitive systems out there, although not everyone will like the freestanding-style display. Android Auto and Apple CarPlay connectivity are part of the package, as is becoming the norm, but built-in navigation isn’t available. An inductive phone charging pad, USB plug, and auxiliary input provide plenty of options for connecting and using devices. One minor ergonomic quibble is that I’d prefer to have the climate control information displayed immediately adjacent to the climate controls themselves, rather than some distance away on the infotainment screen.

A bigger beef is with the Stinger’s poor rearward sightlines, which are downright tunnel-like (fortunately there’s a decent rear-view camera with dynamic guidelines). The Volkswagen Arteon and Buick Regal Sportback both manage to create compelling-looking bodylines without sacrificing outward rear visibility as badly as the Stinger (and I’d actually argue that the Regal has the better-looking rump, although the Stinger has the most handsome face of the group, hands-down). I was also disappointed that a sunroof is unavailable in the GT-Line – the only available option is paint colour, which will cost you $200 for anything other than basic black. 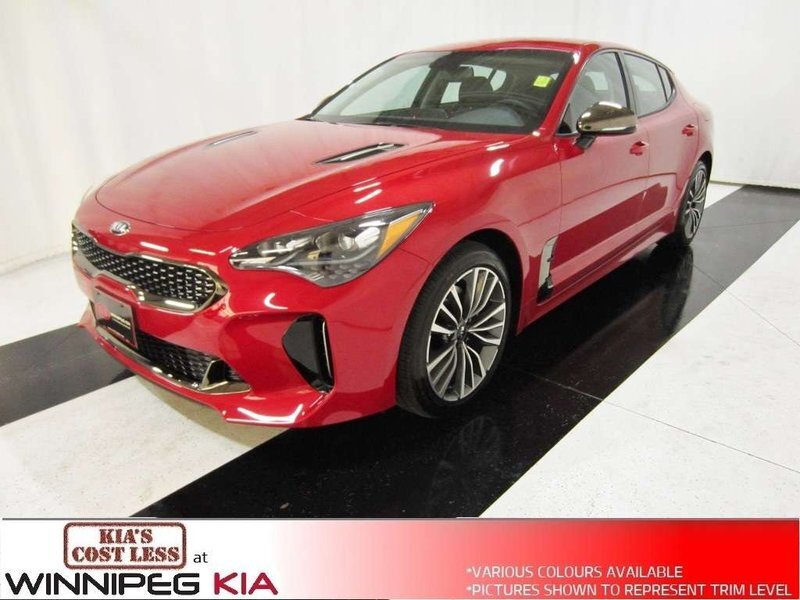 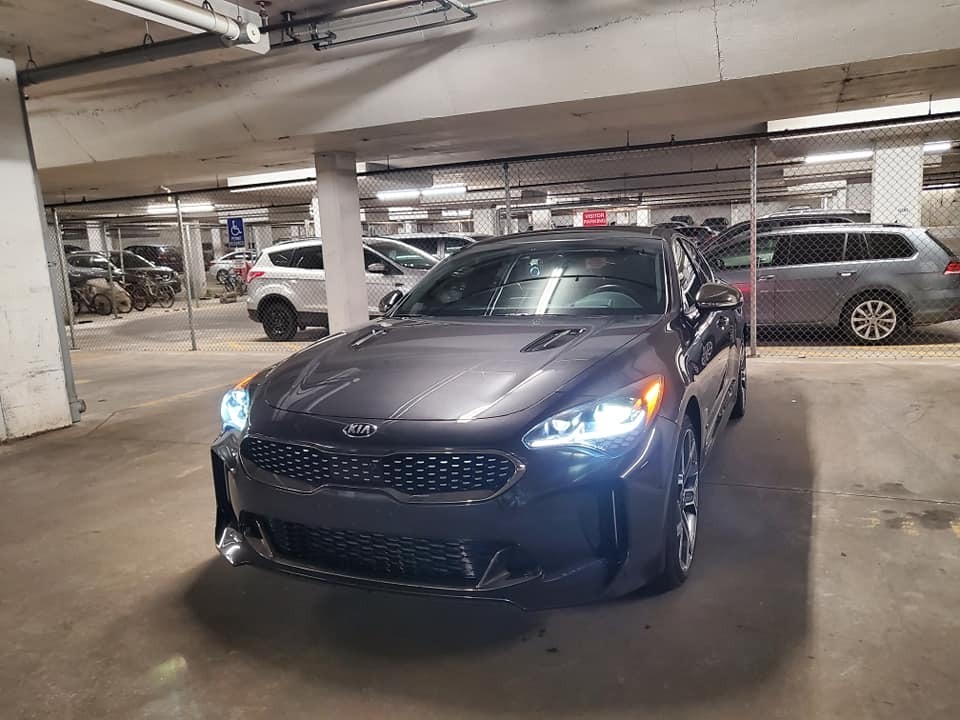 On the road, the Stinger rewards with thoroughly engaging driving dynamics. Kia lured BMW suspension wizard Albert Biermann away from the BMW M Division a couple of years ago, and he’s clearly making his mark: the Stinger has a responsive, light-on-its-feet feel that belies its substantial 1,729 kg (3,812 lb) curb weight.

My test car was fitted with snow tires, which somewhat knocked the edge off its handling, but even on squirmy winter rubber the Stinger offered quick turn-in and great balance, with a slight amount of initial understeer that could easily be tamed with judicious use of the throttle.

The GT-Line’s 255 hp 2.0L turbo four isn’t as sweetly powerful as Kia’s 365 hp 3.3L V6, but it’s still plenty powerful enough to be good fun. Turbo lag is barely perceptible, but what I did find was that the engine could be a bit non-linear in its throttle responses: In Comfort and Eco modes it has a slightly lazy initial response followed up by an unexpectedly sudden onslaught of power as you pushed deeper into the throttle, while in Sport mode it offers a rather overenthusiastic initial response, with little left over for further forays into the throttle.

The Kia-built eight-speed transmission offers quick, crisp automatic shifts, but it has a bit too much lag to offer a truly connected feel when using the paddle shifters. In the name of efficiency it’s programmed to always seek the highest possible gear in Comfort and Eco modes, while in Sport mode it perhaps overcompensates, holding off on upshifts for what’s sometimes a surprisingly long time after you’ve backed off the throttle. Still, the Stinger is hardly alone in these regards, and overall the transmission gets high marks.

The smaller engine does offer fuel savings, although perhaps not as appreciable as expected: The turbo-four powered GT-Line is rated 11.1/8.1 L/100 km (city/highway), versus 13.6/9.6 L/100 km (city/highway) for the V6-powered Stinger GT. I drove with a rather heavy foot during my week with the car, netting city results of 13.2 L/100 km – only a fraction better than the rated numbers for the V6. My best highway result was just under 9.0 L/100 km.

For those set on the sportback concept, the Kia Stinger has few peers: The slightly smaller Audi A5 Sportback, which starts at $49,200, is perhaps the Stinger’s closest competitor, although it can quickly rise in price if you start to add options. BMW’s 4 Series Gran Coupe is similar in concept, but significantly more expensive at a starting price of $52,150. A somewhat surprising domestic contender is Buick’s Regal Sportback. It starts at just $32,045, but that’s with front-wheel drive – a more comparable (and quite compelling) car would be an AWD GS model, which starts at $44,045. A newcomer arriving for the spring of 2019 is VW’s Arteon, which starts at $47,995.

Realistically, however, very few consumer appear happy with a trunk these days, and Kia is banking that a dynamically satisfying, luxuriously-appointed five-door sportback might be just what’s needed to lure buyers away from the SUV fold. If you’re a fan of cars that are as fun to drive as they are practical, it’s a good thing indeed.

About Simon Hill
Simon Hill rebuilt his first engine, an air-cooled Volkswagen, at 14. He started writing professionally about cars in 2009 and was also the editor of Boat Journal magazine. He lives in Vancouver, BC.
You may also like
7.9