SAINT-TROPEZ, France – It’s easy to imagine oneself in a James Bond flick when driving around the Côte d’Azur in Southern France. The architecture is beautiful, the landscapes are spectacular, and the people carry themselves with an air of sophistication and glamour rarely seen in North America.

It’s just the sort of place a suave, tuxedo-wearing secret agent might choose to exercise his pricey European car on a mountain drive, with the guttural roar of a V8 reverberating off cliff walls and inside tunnels. Add a trio of motorcycles and a helicopter in hot pursuit, and you have the makings of a blockbuster movie opening.

Short of the tuxes and chasing baddies, this is pretty much the scenario Jaguar presented to unleash the newest offering from its high-performance division. And just as the first appearance of Daniel Craig as a new, more muscular Mr. Bond was rather shocking, so too is the role of our high-performance steed in this particular action film fantasy. There’s no low-slung British coupé or even a sensual saloon, but instead, we have been assigned an SUV; the sort of family-oriented machine found in Whole Foods parking lots, driven by affluent folks who carry a dog in a handbag.

Except this is no regular lux-ute. This one – a 2020 Jaguar F-Pace SVR – has gone through Jaguar’s Special Vehicle Operations’ boot camp and come out the other side a sporting machine with Herculean strength and surprising agility.

Jaguar’s F-Pace has already been lauded for its performance. Until now, the top-trim engine was as supercharged V6 that presented 380 horsepower; a figure that is more than enough to make the F-Pace properly sporting in its own right. Mixed in with a lightweight aluminum platform and a 50/50 weight balance, Jaguar’s impressive suspension tune resulted in an SUV that could quell the grumping of the anti-sport-ute masses (like yours truly).

The new F-Pace SVR turns that wonderfully sporting ute into an impossibly capable road weapon. Hot-rodders have long since known that stuffing an oversized and powerful engine into a small vehicle results in wicked fun. 550 supercharged horsepower and 502 lb-ft of torque fulfill that promise and help the F-Pace SVR rip from zero to 60 mph (96 km/h) in 4.1 seconds on its way through a quarter-mile of 12.3 seconds and on to a top speed of 176 mph (283 km/h).

Compared to lesser F-Paces, the eight-speed transmission has been recalibrated for faster shifts, and coupled with greater immediacy in the throttle response too. Paddle shifters are provided, but in “S” mode, the transmission anticipates the driver’s needs so well that the paddles are rendered redundant.

There’s an adaptive exhaust system, too, that helps ensure everyone for a mile around knows this is a very special performance machine.

Still, anyone can make a loud hot-rod, but where the F-Pace SVR really shines is how capable it is in all of its driving dynamics. Front spring rates have been increased 30 percent, and rears 10 percent over last year’s F-Pace S, resulting in a five-percent reduction in body roll. The tires are up to 295-width in the rear (over last year’s 265-width), and the 22-inch wheels are forged, netting a weight reduction of more than four kilograms per corner. There’s also an active, electronic rear differential.

The F-Pace’s all-wheel drive system is rear-wheel-biased, directing up to 100 percent of the power to the back tires, but never more than 50 percent distributed to the front. Both traction control and stability control systems have been recalibrated for more sporting applications. 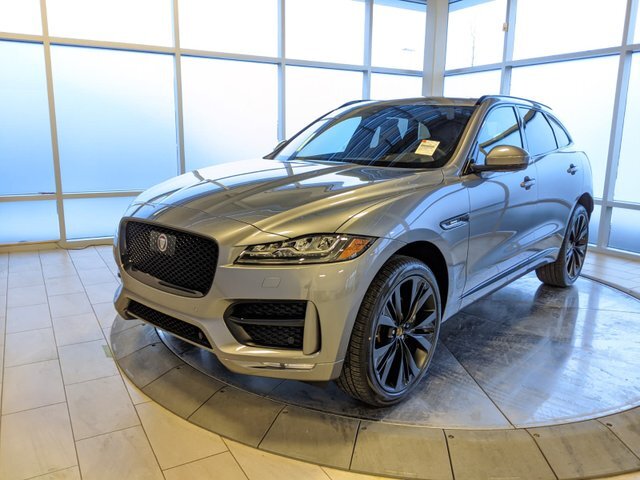 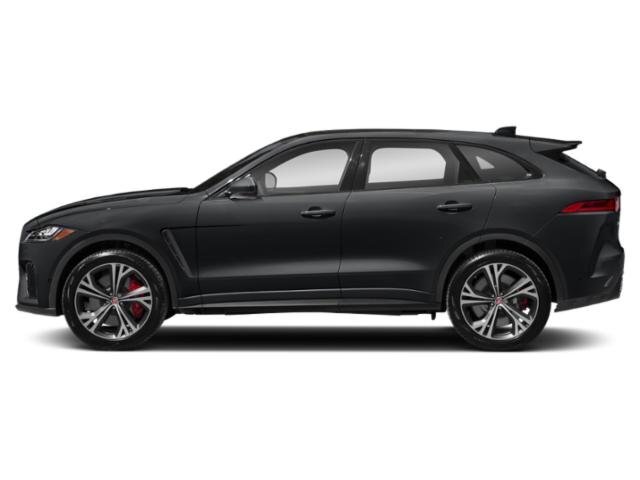 The result is a performance car that forgets it’s an SUV. Jaguar claims they benchmarked sport wagons like Audi’s RS6 Avant and Mercedes-AMG’s E63 as well as natural competitors like the Porsche Macan, and the composure of the SVR’s handling suggests they’ve succeeded. The F-Pace’s steering isn’t overly and artificially heavy, but feels lively and precise when carving through a series of S-bends.

More surprising is how composed the suspension is over rough terrain. We were directed up a six-kilometre access road to the top of Montagne de Lachens for a beautiful photo spot. The road was single-car-width and more pockmarked than a minefield, and yet the Jag happily ripped up the hill, soaking up the bumps and holes with aplomb, somehow managing to never bounce off course, nor direct any serious jolts to the cabin. All this while wearing massive 22-inch wheels.

The brakes are upgraded too with two-piece discs (15.5-inch up front, 15.6-inch rear) providing massive stopping power and perfect pedal feel; even after hard-charging down the mountain, they displayed no sign of fade.

The net result is an SUV that balances everyday comfort with truly remarkable performance, and when we came upon a small, well-driven Seat hatchback that was making short work of the other local traffic, the SVR made reeling it in so completely effortless, that it made its driver look heroic. Never mind that the Jag had roughly five times the power and notably better grip.

Jaguars have long been celebrated for their styling triumphs, and as far as SUVs go, the F-Pace is among the prettier ones. The SVR simply builds muscle mass and aggressiveness into the F-Pace’s sensual lines. The front bumper wears bolder air intakes, and lead into unique front fenders with larger extraction vents. The hood, too, has venting to increase cooling. The rear valance and bumper are also unique to the SVR, as is its rear spoiler. Altogether the look is powerful without being garish, and reduces lift, while improving cooling.

Inside, the updates are similarly subtle, but important. The slimline bucket seats are covered in a quilted-pattern leather and have SVR embossed on the headrests. They offer good support during spirited driving, but also enough comfort for day-long road trips. A pistol-grip shifter from the F-Type sports car sprouts from the centre console, instead of the rising rotary knob found in other F-Pace models.

Otherwise, the interior is pretty much standard fare F-Pace, full of the luxury, convenience, and safety features expected in vehicles of this class.

The rear seat and cargo capacity are unaffected by the performance upgrades, meaning four adults wanting to do a cross-continent road trip (in a big hurry!) could quite comfortably do so, and have ample room for their luggage. There’s a seatbelt for a third rear-seat passenger, but it’s a pretty tight spot. Or, if Q were setting this SVR up for Mr. Bond, he’d have plenty of space to add rockets, ejector seats, and all manner of fun toys James enjoys on his adventures.

The F-Pace is Jaguar’s hottest-selling model in Canada, so it’s no surprise the SVO team was given the green light to create this sizzling variation. For die-hard motoring enthusiasts, though, it’s sad that so much engineering and performance was bestowed upon an SUV when there’s no plan for Jaguar to do an SVR version of its XE sport sedan.

Given how good the F-Pace S is, it is remarkable that the SVR could be made appreciably better, but it is. The SVR’s performance is not remarkable simply by SUV standards, but against some formidable sport sedans and wagons too, yet all this performance is managed without losing daily-living functionality.

Buyers of the F-Pace SVR can feel as comfortable parking their rig in front of their favourite café as chasing down bad guys in a high-speed chase in their very own action film.

The Jaguar F-Pace SVR arrives in Canadian showrooms this autumn.

About Jeff Wilson
Jeff has been an automotive and motorcycle journalist for nearly a decade, but his passion for cars and bikes stretches back to his childhood. A member of AJAC, Jeff has also served on its board of directors, and has won multiple awards for both his writing and photography. When chasing his automotive dreams, Jeff also divides his time between being a father and a television producer with an internationally acclaimed, Emmy-nominated production team.
Follow me
You may also like
AdChoices
Latest Articles
﻿
Request.ServerVariables: Request.Params: Request.Cookies: Response.Cookies: Request.Headers: Response.Headers: