We Canadians love our all-wheel-drive (AWD) vehicles. We’re also pretty testy about gasoline prices. So, it’s about time that Toyota offered AWD with the Prius. Their reluctance may have had something to do with the increase in weight that AWD systems entail. But adding just 57 kg, this one’s light, as demonstrated in the 2019 Toyota Prius AWD-e’s exceptional fuel efficiency numbers: 4.5 L/100km in the city, 4.9 on the highway, and 4.7 combined versus the basic Prius’ 4.4, 4.6, and 4.5. Mind, the fuel savings better be good with the overall price kicking off at over $30K for the base model with an AWD upgrade and destination fee.

The AWD is powered by an extra electric motor just for the rear wheels. Clever. It’s always on from standstill to about 10 km/h, delivering that additional motivation that makes Canadians believe they’re safe in winter. Cleverer. Above that speed, the computers read the road, delivering the extra power only when needed. You don’t touch any switches or fiddle with any buttons; it’s automatic. Go 70 km/h or faster, the Prius is completely powered by front-wheel drive (FWD). The transition between AWD and FWD is almost unnoticeable.

The timing for testing this new trim wasn’t ideal. The two months leading up to the week that I had the Prius AWD-e, Southern Ontario suffered a mini ice age that converted the GTA into a glacier with traffic lights. However, the roads were clear by the end of March, so there wasn’t much winter left to challenge this new AWD system.

On the other hand, the test week kicked off on April Fool’s Day, the first day of the Liberal government’s carbon tax on those grumpy provinces – like Ontario – who hadn’t already imposed pollution charges of their own. If the jump in gasoline prices isn’t enough to make hybrids sound attractive, the following sentence won’t either. Combined, the four-cylinder engine and electric (AWD-e) motor that make up the hybrid system churn out a heart-stopping, police-chilling 121 hp! To keep things light, the engineers didn’t overload the Prius with excessive noise-baffling. When you stomp on the accelerator it roars like a llama.

Indeed, if you’re the type who likes a V12 to grill steak on, this may not make the test drive list. Instead of the usual leather-clad stick seated firmly in the centre console, the shifter looks and behaves more like a coat hook, poking nervously from where the cigarette lighter would be. But driving this car was actually kind of fun. It even looks fun-ish. The exterior styling is aggressive for a hybrid, its nose sloping continuously from three-quarters of the way back, and the blue accent lights at the front pugnaciously shaped like concave boar tusks. Besides…

No one buys a Prius to salve a midlife crisis.

The electric power is a quick kick and by nature quiet. So, the Prius Technology AWD-e is a torquey little thing from zero that nips ahead of others easily enough in the perpetual urban race to the next traffic light. With a ground clearance of just 123 mm, it might not have loved the recent accumulated ice we had invading our burg’s streets. But it hugged the road niftily and held well. The turning circle was a tight 10.6 m, another compact advantage for navigating your way through the overcrowded city. 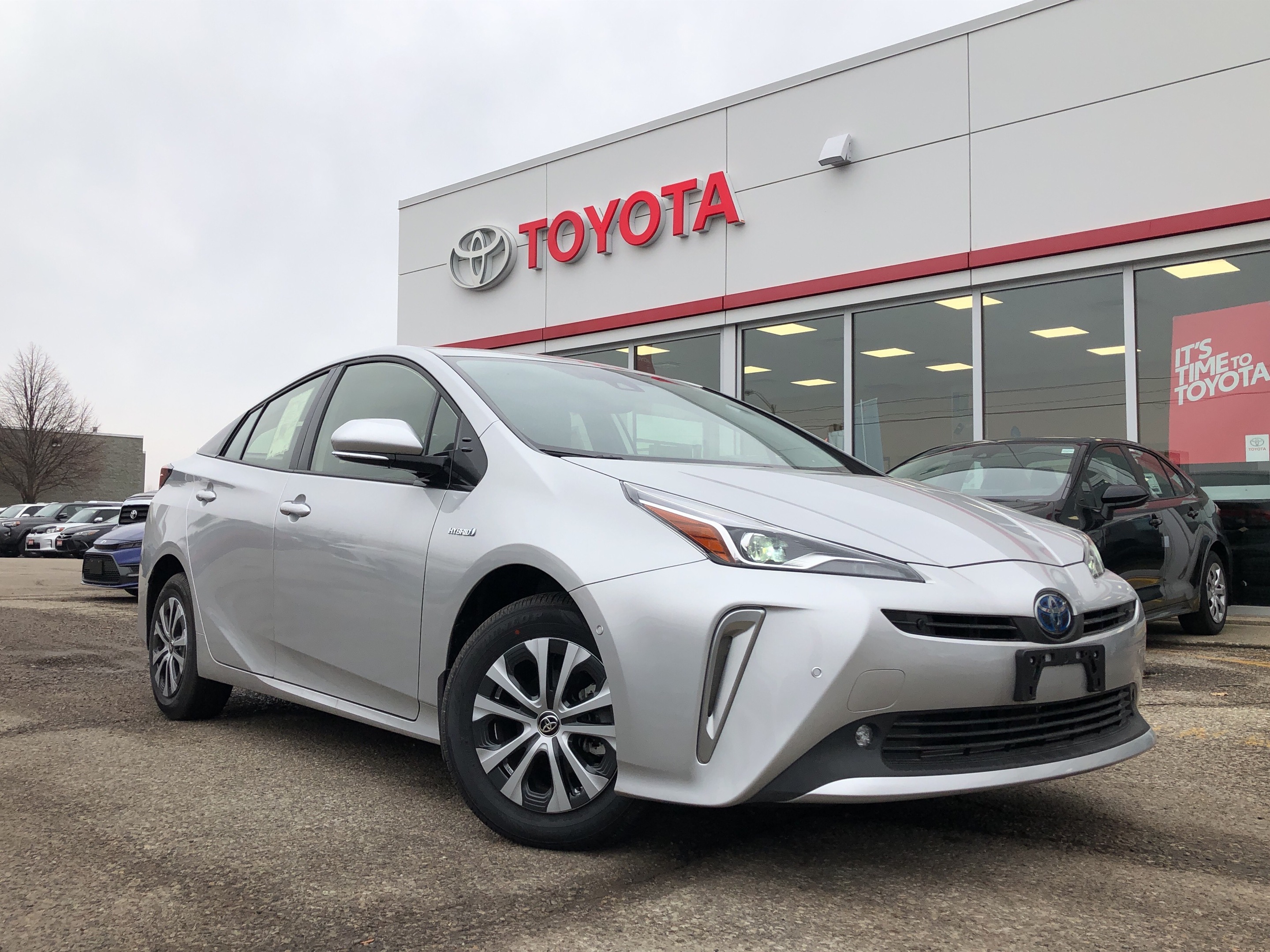 The steering was a little loose, feeling more like a video game than a day at the track. But let’s be honest. The customer Toyota’s seeking to please is more techhead than gearhead, although it’s surprising that it still doesn’t support Apple CarPlay or Android Auto. That said…

There’s innovative thought in the interior design, which is clever if over-reliant on plastics.

The angle of head-up display is customizable from the HUD button. The display indicates speed, fuel, and, importantly, power status of the hybrid system. (Are you recharging the batteries, running on electric power, et cetera? Driving becomes a game of “Starve the Gas Pumps” to most hybrid drivers.) So, your eyes need rarely stray from the road. Which is almost a pity because below lies a nerd’s wonderland.

A narrow mini-screen rests atop 50 percent of the dashboard, providing detailed information on the hybrid status, and other mechanical necessaries. Further below, an 11.6-inch interactive display screen would almost give Tesla a run for its money when it comes to size and attractive power. The graphics are cartoony good fun, more Mork than muscle.

Let’s talk a bit about the division and distribution of space.

The Prius seats five but the back area feels a bit tight and I’m only 5'10". The cargo capacity is 697 L and 1,775 L with 60/40 split back seats down. The liftback gate is window-y enough to merit its own wiper. The containment of all that glass limits the rear view more than I was expecting, given the plethora of glass.

AWD-e designation is the first step up from the base Prius. Technology is the next. Adding AWD-e to it tops the trim, although this best-in-breed level doesn’t include a moonroof like the less expensive Technology. Moreover, this top trim is certainly not luxurious. The front seats and steering wheel are heated but the leatheresque coverings feel thoroughly artificial and even the driver’s seat is mechanical.

Between those many safety features and the introduction of AWD (with its accompanying “e” for electric – thank you), Toyota has demonstrated it listens to what customers in Canada want.  Just in time for an April Foolish inter-governmental PR war over carbon and pollution taxes.