Production of the original BMW 8 Series (E31) ran from 1990 to 1999 to fill an exclusive niche above the 6 Series Coupe, but the model was never offered from the factory as a convertible. So, while the 2019 BMW M850i xDrive isn’t exactly breaking into a new niche, it is a first.

Top down, tunes up.

Receiving an invitation to test drive a luxury convertible in California during the icy depths of our Canadian winter, my response was positive and immediate. The bad news was that the weather in Palm Springs, California, was in the single digits and called for significant precipitation. Not what one would consider ideal convertible weather, but this isn’t a leaky vintage British sports car, this is a brand-new six-figure BMW built for the upper echelon of society.

Not everyone understands the concept behind owning a convertible. Under most circumstances, they are more expensive, heavier, and slower than their coupe counterparts. Over the years I have owned several soft-tops. During that time I was frequently asked if I’d been away on holiday. I hadn’t. The smile on my face and the tan on my skin are because I commuted in a convertible. Rather than viewing it as an inconvenience, every rush hour in the summer became a mini-vacation for me. Top down, tunes up.

Owning a convertible once came with a host of compromises. In order to enjoy those few select sunny summer days when the weather was just right, one had to endure the challenges that once came with owning a soft-top – namely leaks, road noise, lack of insulation, and chassis flex. But those days are largely behind us, particularly in the premium segment. Designs feature much tighter gaps, and higher build quality means that convertibles aren’t as heavy, ungainly, and unrefined as they once were.

What about safety? Yes, there was a time when convertibles were understandably maligned for their lack of integrity during a rollover, but those days too are long gone. A safety feature first introduced on the Volvo C70, the M850i’s onboard computers will detonate high-strength roll bars from behind the rear headrests for your protection should they detect an impending rollover. Problem solved.

The 8 Series Coupe is one of the most beautifully designed vehicles on the market today, so I was curious to see how the convertible version would look in person. Lopping the top off a car doesn’t always fare well for its proportions, so thankfully the 850i’s transformation was far more calculated. Following in the footsteps of its Coupe sibling, the four-seater Cabriolet (or Convertible, BMW uses both terms interchangeably) offers sleek and seductive styling, but with a high-quality, well-insulated soft top that can be raised or lowered in 15 seconds at speeds up to 48 km/h. The classic soft top is offered in Black as standard, with Anthracite Silver available as an option. The multi-layered top offers acoustic insulation to keep road noise down when the roof is up and tucks away out of sight when it’s down. 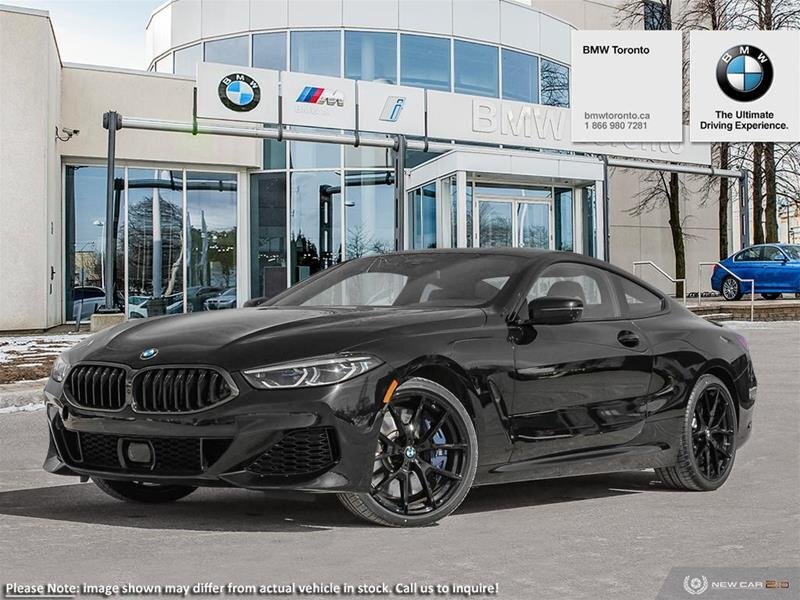 With a choice of colours available, I gravitated towards the Barcelona Blue Metallic model with Cognac Merino leather interior. My prerogative has always been that if you spend the extra money to purchase a convertible and had to endure all of the aforementioned shortcomings, then the top should be down whenever it isn’t raining or snowing. Cold weather or not, I slid behind the chunky M Sport steering wheel and dropped the top. Of course, it is a lot less heroic with the heated seats and steering wheel turned on, as well as the air collar. Adjustable manually or based on vehicle speed, the wholly indulgent feature keeps your neck warm by directing warm air onto your neck with three levels of intensity.

Rear seating offers accommodation for two, which would likely be limited to short trips or small children as space is somewhat restricted. The area can also be used to house a detachable wind deflector which can be stored in the trunk when not in use. Even without the wind deflector in place, wind noise wasn’t loud enough to prevent a conversation. As expected, the trunk isn’t cavernous but will accommodate a few sets of golf clubs or enough luggage for a romantic getaway, which realistically is what the vehicle will be used for.

In typical BMW style, the interior cabin of the M850i is functional, but also more luxurious than the outgoing 6 Series. One can simply get in and drive comfortably or modify their experience by choosing various drive modes and preferences through the iDrive Controller and buttons surrounding the gear lever. A wealth of information can also be accessed and prioritized based on preference within the dash display. Unlike many new vehicles equipped with advanced safety features, those of the M850i are more tastefully integrated.

The M850i Coupe and Cabrio both come only in rear-biased xDrive trim, but a range-topping M8 is expected to follow, which will offer rear-wheel drive enjoyment. Changing gears through the eight-speed automatic transmission can be accomplished by using the gear selector or paddle shifters. Offering grand touring proportions and price tag, the M850i Convertible moves faster than its 2,148 kg (4,736 lb) curb weight would suggest. Starting at $131,500, opting for the M850i xDrive Convertible adds $8,000 to the price tag and 117 kg (258 lb) to the curb weight. Both versions feature a twin turbocharged 4.4 L V8 making 523 hp at 5,500 rpm and 553 lb-ft of torque at as low as 1,400 rpm, but the sprint to 100 km/h will take 3.8 seconds, an extra 0.2 seconds longer than the hard-top. But my guess is that the possibility of anyone buying the six-figure convertible to go drag racing is pretty slim, so does it really matter?

Exploring the roads in Thermal, California, surrounding BMW Performance Center West, the M850i Convertible’s road manners are poised and well balanced. Luxurious, smooth, and serene, it can transform into an alternate state of being when called upon. Select Sport mode and the rear pipes respond with a gurgle, as steering inputs, suspension damping rates, and throttle response quicken. Activating Sport+ takes it a step further, echoing a raspy bark while getting on the gas or matching revs on downshifts. It’s not Jaguar F-Type aggressive, but it provides a noticeable and welcome soundtrack, particularly with the roof down. In fact, it was enjoyable enough that I turned off the high-quality stereo to enjoy its sound. Steering provides enough feedback to be sporting without being twitchy or unpredictable. Not having piloted the Coupe yet, I can’t speak to the differences in driving dynamics or feel, but I can say that there wasn’t any perceivable chassis flex or unseemly vibrations while driving on public roads within relative proximity to the posted speed limits.

When everyone seems to be buying SUVs and crossovers these days, the question could be raised why a six-figure convertible is deserving of attention. The bean counters at BMW may even be wondering why the limited production volume of the droptop 8 Series isn’t being directed towards other areas of the portfolio. High-end convertibles may not make up the bulk of the business, but there is still a market for them and a profit to be turned therein. Besides, how much practicality and room for stuff do you actually need? Personally, I think everyone could benefit from some open-air motoring. So why not lower the roof and let a little sun shine in? It doesn’t matter if other people don’t understand – they don’t have to.

About Dustin Woods
Fascinated by anything with an engine since he was old enough to walk, Dustin has been crafting automotive news, reviews, and travel content for over 14 years. He holds an Honours Bachelor of Arts in Communications Studies and English from Wilfrid Laurier University and a post-graduate certificate in Broadcasting from Humber College. Dustin is the Associate Editor of autoTRADER.ca, a member of the Automobile Journalists Association of Canada (AJAC), and a doting cat dad.
Follow me
You may also like
AdChoices
Latest Articles
﻿