There is a stretch of Lake Ontario’s north shore that runs through the town of Oakville. It’s a lovely little community with an abundance of mature trees and large homes, with a dozen or so waterfront properties currently for sale ranging from a few million dollars, up to Canada’s most expensive residence, listed at $59 million.

A vehicular respite from the stresses of daily life.

It’s the same story all over the country, where only the very well-to-do are permitted the nicest of views, and it seems a little unfair. But there might be a loophole.

Audi’s all-new 2019 A8 L flagship sedan provides sublime accommodations suitable for the sort of folks who purchase abodes that cost seven figures and up. Plus, unlike those architectural alternatives, the Audi can offer ever-changing views.

Had enough of those Lake Ontario vistas? Why not drive on and park somewhere with a view of Toronto’s skyline? Or go north to a lush and lovely woodland?

Sure, it’s silly to suggest one might actually consider giving up a house to live in a car, but if you were going to do it, the A8 L would be a heck of a choice. After all, at $131,000, its cost is only 28 percent of the average Canadian home, and less than 10 percent of even an entry-level waterfront property around here. What’s more, there appears to be more square footage in the Audi’s backseat than in most Toronto condos.

As with all the top-level, premium sedans, Audi’s largest car is expected to give wealthy drivers (or passengers) a vehicular respite from the stresses of daily life.

Providing occupant comfort is an art form mastered by Audi’s engineers and interior stylists. The front seats of this test car were, of course, heated and cooled, but also wrapped in butter-soft (and highly fragrant) leather hides, and featured a multitude of massaging functions. So, too, did the rear seats. Front-seat occupants have 22 ways to adjust their thrones, plus have their elbows warmed on the heated armrests. Naturally, the steering wheel is heated as well.

Those seats, when fitted within the isolation chamber that is an A8 L, create an almost immediate calming effect. The cabin is exceptionally quiet, with road, wind, and engine noise being indignities suffered by those riding in lesser machines, not the A8.

Generally, optional audio system upgrades within premium machines can seem like a gratuitous indulgence, adding thousands of dollars to what’s already a very costly machine. And yet after listening to some favourite tracks piped through the $5,100 Bang & Olufsen surround sound system in the A8 L, the admission to the B&O concert seems entirely reasonable. Audiophiles will delight in the audio range and clarity offered, enabling a listening experience superior to any recalled from other cars. One would need to spend a significant amount of money to have a home system engineered as masterfully as this one is. For a driver (or someone being driven) to choose more time in traffic or a longer commute to enjoy some additional time with the music seems entirely reasonable.

Opting for the $3,500 Rear Seat Connectivity Package will permit rear seat passengers to control the functionality of this impressive audio system via a pair of removable Audi tablets. Plus, they’ll get some USB ports and a DVD changer, although the latter in a tech-filled car like the A8 feels almost as archaic as an 8-track cassette player. Rear-seat passengers can also operate the sunroof – even the portion above the front seats.

The latest version of Audi’s MMI (Multi Media Interface) eschews the rotary controller (with touchpad top) of previous systems, for an all-glass cockpit. The centre stack features a pair of sizable screens with haptic touchpad functionality for everything from climate controls to driver aids, and pretty much everything else the car can do. The screens are bright and high resolution, with Google Earth mapping looking particularly slick. The system is relatively intuitive to navigate, but the virtual “buttons” require a more deliberate press than is typical for other touchpad surfaces, like an iPad, and thus need some time to get used to.

A third screen – named the Virtual Cockpit – resides in front of the driver in place of traditional gauges, which Audi has used to good effect across most of its line up, and now in the A8, too. There’s a significant amount of information presented to a driver at any given moment in these highly advanced, premium cars, and it can border on overwhelming, but Audi has done a good job organizing all the functions and information in sensible chunks. The test car also had a head-up display, providing even more visual stimulus, though perhaps mercifully, became invisible if the driver wore polarized sunglasses.

Audi A8 available on autoTRADER.ca 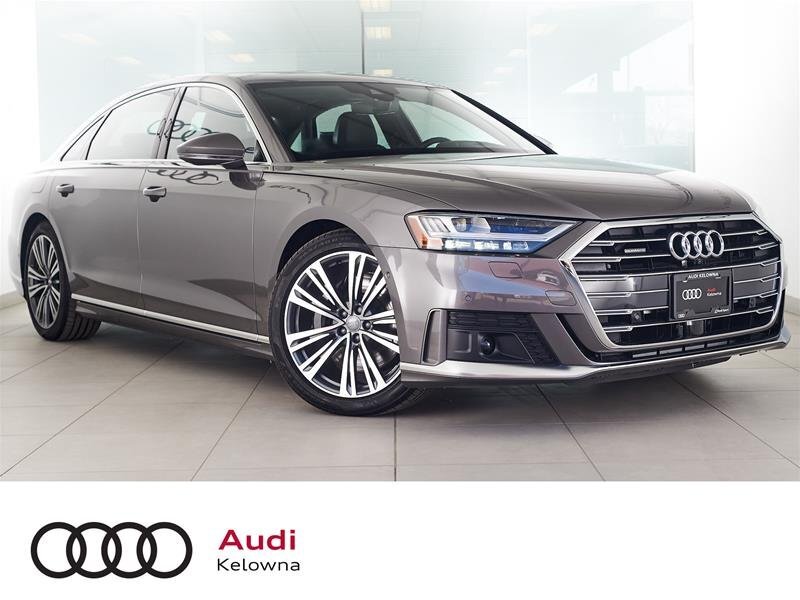 For such a large car, there is a surprising lack of cubbies and places to put things. One smartphone can live in the very shallow centre console atop the wireless charging pad, but a passenger will need to keep their phone in a cupholder. My sunglasses case, toll-route transponder and parking permit all had to live in the small door pocket.

For decades, the premium German car companies have used their large sedans as the introductory point for their latest technological offerings. The Audi A8 L is no exception, serving as a monumental high-tech advancement by becoming the first car on the market capable of Level 3 autonomous driving. Thanks to an abundance of safety redundancy systems baked in, A8 drivers can remove their hands from the steering wheel and even take their attention off the road.

The system is called Audi’s AI Traffic Jam Pilot and it utilizes a suite of radar, ultrasonic, laser, and camera sensors to direct the A8’s steering and driving, even in start-and-stop traffic, up to 60 km/h, on a divided highway. It’s a system Audi claims offers the ultimate luxury: time. If a busy executive wishes to utilize their time in the car productively, the car can enable that by taking over driving duties.

All of this sounds glorious, except that it’s not available in Canada due to a host of potential legal and logistic pitfalls. Surprisingly, when utilizing the A8 L’s adaptive cruise control and lane-keeping assist systems on Toronto’s Highway 401, the car nearly came to a halt when it became confounded by the lane splitting into the express and collector lanes. This is not an overly unique freeway scenario, which suggests the legislative restrictions on such technology are probably still a good idea.

Audi’s artificially intelligent driving aids aren’t the only feature disallowed here. Europe gets laser headlights and Americans can option their A8 L’s with a massaging foot function, neither of which are found in Canadian cars.

What Canadian A8 L buyers do get is a decadent, spacious, and quiet premium sedan with available technology on par with the big sedan offerings from competitors.

It’s a similar story with the powertrain, where Audi’s top sedan is competitive, but not a standout. All current Canadian A8s come only with the extended wheelbase (making them A8 L models) and powered by a turbocharged, 3.0-litre V6 engine that drives all four wheels via a smooth-shifting eight-speed automatic transmission. It’s a shockingly smooth and quiet system, but it’s not seriously fast the way so many high-priced machines are today. The engine is aided by a 48-volt mild hybrid system that reduces fuel consumption by offering modest assistance, and is recharged through braking energy.

The A8 L is motivated by 369 lb-ft of torque, a figure that’s the same as a V6-powered Mercedes-Benz S 450, though well-short of a Lexus LS 500’s 442 lb-ft. Horsepower, at 335 hp, falls well behind those other competitors. BMW’s upcoming 745Le plug-in hybrid will offer superior efficiency.

It’s sufficient motivation for the largely aluminum A8 L to move swiftly, but will not satisfy the power-hungry who have grown accustomed to the bigger-engine flagships. A 4.0-litre, turbocharged V8 A8 L is coming later this year, and we shouldn’t be surprised to see a higher-performance S8 model at some point later on.

The A8 L has different drive modes, including those that attempt to make the car more sporting than it really is. In Dynamic mode, gear shifts are sharper and the standard air suspension firms up a bit, but there’s only so much a car that’s more than three-and-a-half feet longer than a TT sportscar can do in the corners. The A8 L, at 1,945 kg, might be notably lighter than its competitors, but it’s still no flyweight.

Instead of hustling the big sedan in such an undignified manner, the A8 L is, by far, better enjoyed on the highway where its creamy, yet controlled ride makes it feel more like a maglev train than a terrestrial, wheeled machine. Keep the drive mode in its Comfort setting, crank up the music, and feel the stress melt away – that’s what this car does best.

Audi sold 145 A8s in Canada in 2018, while Jaguar sold more XJs, and even Maserati’s rare Quattroporte ended up in almost as many garages. The German competitors’ big sedan sales were significantly higher, all of which means A8 L buyers should enjoy some considerable exclusivity, even in tony neighbourhoods like Oakville.

With an increasing number of popular, premium SUVs hitting the marketplace, flagship sedans have a particularly tough road ahead, winning consumers. It’s a real shame, too, since extremely few crossovers can approach the on-road splendour afforded by cars like the A8 L.

For those fortunate enough to purchase an Audi A8 L, hopefully they will take the time to stop every once in a while, and truly enjoy everything afforded by such a fine automobile. And with any luck, that will even include the view.

About Jeff Wilson
Jeff has been an automotive and motorcycle journalist for nearly a decade, but his passion for cars and bikes stretches back to his childhood. A member of AJAC, Jeff has also served on its board of directors, and has won multiple awards for both his writing and photography. When chasing his automotive dreams, Jeff also divides his time between being a father and a television producer with an internationally acclaimed, Emmy-nominated production team.
Follow me
You may also like
8.3