The concept of a sumptuous full-size luxury sedan equipped with advanced technology, while boasting compact-car-like fuel efficiency, is an enticing proposition, no doubt. Especially so for executives with a generous vehicle allowance, but who may cover their own fuel costs; or ones who want to minimize their environmental footprint, but aren’t ready to go full electric yet; or aren’t ready to sacrifice all the sybaritic pleasures available in this class from the established luxury brands.

In reality, when it comes to the 2019 BMW 740Le, it delivers on the spa-worthy comfort, but sadly it’s the drivetrain that disappoints – a rarity for any BMW, especially at this six-figure price point. The four-cylinder engine and minimal plug-in hybrid electric range lag notably when it comes to both dynamic performance and environmental leadership in this class, a fact tacitly admitted by BMW when it recently announced a more powerful 2020 745Le plug-in coming later this year, which will use a notably more powerful six-cylinder engine, and offer (minimally) more electric range.

Still, there’s some truly impressive technology and comfort inside the ’19 BMW 740Le, ones which awed various colleagues and family members. And the one time where it whiffed on the inspiration-metre was likely as much if not more a function of its driver than the car itself.

Interior amazes, especially in the back

With over $21,000 of interior upgrades, it’s no wonder this interior elicits wows when stepping inside. Upon first opening some of the most solid-sounding doors in the business, most of the oohs and aahs came when opening the rear doors. Especially from the removable tablet integrated into the rear console, part of a $10,000 Executive Lounge package that makes this full-size sedan a four-seater, plus adds massive, fixed tablets to each front seatback.

Rear-seat legroom would be generous for your average giraffe, with power seat controls and full heated, cooled, and massaging seats at all four thrones. But the right rear is clearly the super exec spot, as it’s the only one that has an airplane-style folding table available to it, one that folds up and out of that centre rear console, except instead of cheap plastic with a mini cupholder mark molded into it, this one is a steady, leather-lined desk on the go, with enough heft to keep a laptop steady, but one with a section hard enough to sign important documents.

Up front, the ambiance is more power business exec on the go than luxury overload. As with most full-size sedans, there’s plenty of room in most directions, with leather and wood accents throughout, a panoramic sunroof, and an overall focus on luxury and comfort. But it doesn’t blow you away with luxury.

Leave it to the 7’s technology for that.

One of the 7 Series’ most impressive party tricks is the gesture control that comes standard. The area from the rearview mirror down to the lower section of the centre console is continually monitored by a sensor designed to read hand gestures. Twirl your index finger in front of the dash clockwise, and the stereo volume will increase. Counter-clockwise, and you’ll be better able to hear the “Whoa!” from astonished passengers.

But to really amaze them, use the camera button in between the seats to bring up the full 360-degree view of the 740Le on the large central screen, and then raise two fingers to virtually “pinch” the image in the air. Twist around your fingers, and your view of the car in its surroundings will twist as well, which may or may not be very useful in most driving, but is one of the craziest luxury car party tricks in the business.

And now for the flaming fail – on my part, not the car’s, but disappointing nonetheless. Considering the $25,700 worth of options on this 740Le, including various Executive packages plus an Advanced Driver Assistance Package I had glanced on the spec sheet, I presumed it came with automatic parking, which not only includes the ability to take over the steering wheel while parallel or perpendicular parking (as in a mall), but also the ability to remotely move the car back and forth into a spot. Those apparently are two separate parking option packages, neither of which came on this particular car. 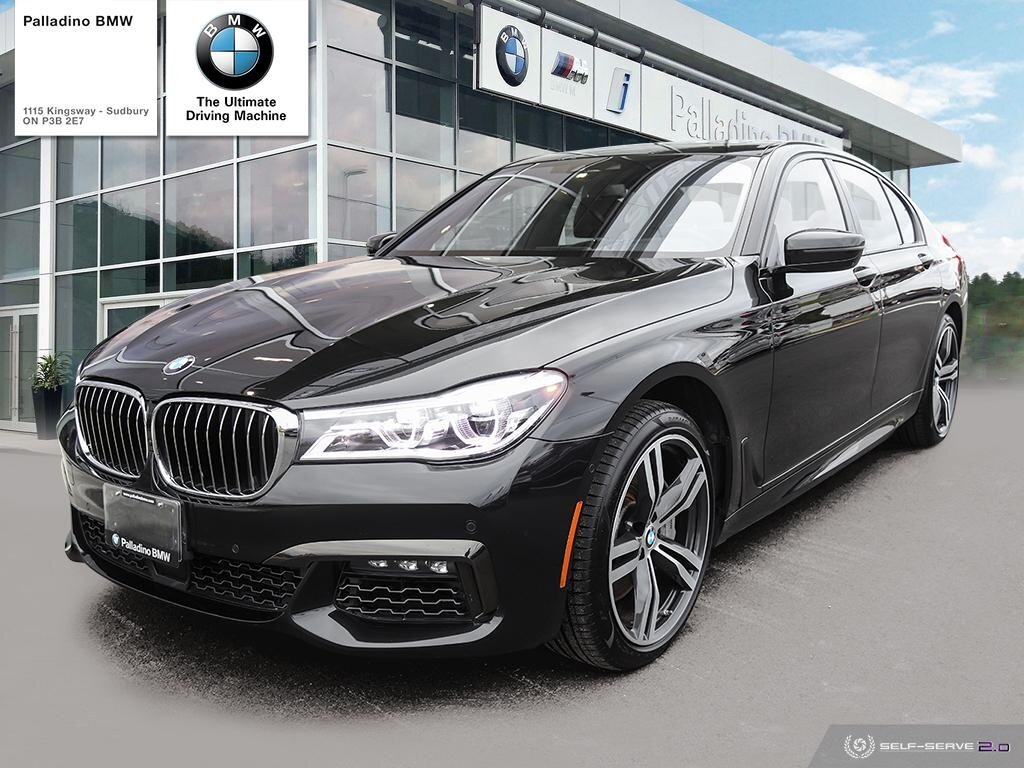 “Hey, anyone want to see this BMW drive itself?” I asked some co-workers enthusiastically. I should have known to try it myself first. Which I immediately thought of when plenty of them took me up on the offer and came down to our office’s parking garage. I knew I didn’t have the big fancy touchscreen key that’s part of a separate Remote Parking package – and one of the largest and bulkiest in the business – but I had thought that the remote control parking function could easily be replicated using the BMW ConnectedDrive app. A similar feature seemed to work with most Tesla models, if so equipped, and straight from the app, though with less than a 100 percent success rate.

Clearly, it’s even lower on BMWs not equipped with this Remote Parking package, like this one. Using the app to merely open the windows and honk the horn remotely was not nearly so impressive, but luckily many were impressed enough with the rear massage seats, folding table, and gesture controls to overlook that it couldn’t roll forward or backwards for one parking spot on its own.

Sure, once the app was downloaded, installed to my phone and synced with the car, it could remotely honk the horn and open and close windows. But it couldn’t magically move the car back and forth with no one sitting in it, and surprisingly couldn’t even remotely start the car.

Drivetrain efficient, but not impressive

The BMW 740Le’s combined 322 hp and 369 lb-ft of torque from the gas engine as well as its permanent magnet motor doesn’t sound overly powerful for such a large vehicle, and it isn’t. It’s never quite sluggish, just less energetic than most rivals, with a 5.3 second 0–100 km/h time that seems adequate, if much slower than pretty much every other car in this class.

That’s not surprising, considering that this power comes from a 2.0-litre four-cylinder engine that’s aided quite a bit by that electric motor. Power is super smooth and silent from a stop, especially if there’s still charge in the 740Le’s 9.2 kWh battery. Though officially rated at 23 km worth of range, in my chilly testing time frame of roughly zero-degree temperatures, the indicator suggested somewhere closer to 16 was available, while various actual counts put it closer to low double digits, or high single digits when used with the heating or defrost. Any time you wanted more thrust, a nicked paddle shifter would soon alert the engine that full thrust was required, and more would soon if not instantly be on tap.

From an overall fuel efficiency perspective, the 740Le averages a largely impressive (for a full-size luxury sedan) 8.8 L/100km, and better than any hybrid or other non-plug-in full-size vehicle. I recorded an average of 9.5 L/100km overall, which is still great for a vehicle as heavy and luxurious as this one, just starting to encroach on the official fuel consumption estimates of the conventional Porsche Panamera (10.3 L/100 km overall average).

Thus the 740Le is efficient, but not for a plug-in vehicle, with the least amount of all-electric range in its class. It’s decently sprightly, but for its class, again, not really – especially for its elevated $145,795 as tested price. It’s luxurious, but many of its most impressive technologies are on the options list, again hurting its value equation. Perhaps it’s this, or perhaps it’s the updated and more powerful version coming, but there’s a reason why BMW is offering tasty discounts of $10,000 or so on the 740Le, according to recent industry reports, so there may be more value involved than the sticker price suggests.

Granted, there’s not much competition left in this class, after the plug-in S-Class and Cadillac CT6 plug-in went away, and before a plug-in version of the Audi A8 arrives in North America. Unless one puts it up against the much quicker, much quieter, and all-electric Tesla Model S, another six-figure all-wheel-drive sport sedan (in dual-motor D versions). But especially in the more powerful P versions of the Model S, there’s simply no question that the Tesla feels like the sportier of the two, though the competition becomes much closer when it comes down to a question of handling and steering feel, in which BMW shines.

And of course, zero tailpipe emissions bests even decent four-cylinder fuel efficiency when it comes to environmental friendliness, which is likely a more powerful motivator for buyers of high-end plug-in vehicles than outright fuel cost savings.

In short, BMW’s flagship plug-in full-size four-door is more luxury sedan than sport sedan – one that sacrifices its traditionally sporting credentials to increase its green ones, but ends up lagging behind in both. Yes it’s a technologically impressive flagship when it comes to interior comfort and gee-whiz features, but in a rare move for BMW, its move to a more powerful six-cylinder engine so soon after the 740Le’s introduction a couple years ago suggests that it realizes buyers in this class want both environmental and driving performance, and is gearing up to provide even more of both in the 7 Series soon.

About Michael Bettencourt
Michael Bettencourt has been writing about cars and automotive topics for over 25 years, with over two decades as a member of the Automobile Journalists Association of Canada (AJAC). A journalism graduate of Ryerson University, he has won multiple awards for technical, vehicle testing, and green vehicle writing. Currently a judge for the Electric Vehicle Dealer’s Association awards, he bought his first EV in 2011, and follows the EV industry closely.
Follow me
You may also like
8.2