ATTICA, Greece – The more the 911 changes, the more it stays the same. When an all-new generation 2020 Porsche 911 arrives this fall in Canada – with first the coupe and followed soon after by the Cabriolet droptop – don’t expect anything radically different for the eighth generation of Porsche’s iconic 911 sports car. At least, not yet.

The 911 Carrera S and its all-wheel-drive 4S coupe counterpart were unveiled late last year at the Los Angeles auto show. The drop-top dropped at the Geneva auto show, and our Greek excursion to drive the Cabriolet just outside of Athens landed a few days after it debuted publicly in Switzerland. Neither unveiling shocked, on the styling or technology front, but both launches detailed worthy upgrades in many key areas.

Even after spending a full day behind the wheel of the 911 Cabriolet, the all-wheel-drive 4S in our case, with hours of caressing and careening it through mountain curves and traffic-logged city streets, there’s a fondness for that recognizable Porsche boxer-six sound and tactile steering feedback, and excitement about the extra power and sporting capability. Outside the driver’s seat, when getting up close and personal to photograph its new details, they’re noticeably modern, yet step back a few paces, and the 911 Cabriolet remains an instantly modern yet alluringly recognizable silhouette.

These myriad updates to such a familiar icon of the sports car universe is what makes the prospect of an all-new Porsche 911 the automotive world’s greatest oxymoron.

There’s a good reason for this conservatism. As Porsche officials admit, many 911 buyers tend to be very wary of change to their beloved sports car. And with roughly 80 percent of all new 911 buyers globally coming from current owners, according to “Mr. 911” August Achleitner of Porsche AG, there’s a major financial incentive for the German sports car/SUV brand to not stray too far from what has worked well for them for so many years.

As Achleitner put it over dinner when asked about its Cabriolet rivals, the “911’s greatest competition is the 911.”

So here’s what’s new in all these key areas, and what remains familiar, if not quite the same.

Design changes more in back, inside, and at night

This upcoming family of 911 variants that start for the 2020 model year is already referred to internally and by Porschephiles as the 992 model, replacing the 991 generation that’s currently on sale. Walking up close to the 911 Cabriolet in the warm sunshine of the Mediterranean coast for the first time, just outside Athens, it’s immediately clear you don’t have to have a Porsche logo tattooed on your body to recognize this car as a 911 from pretty much any distance.

And yet, there are subtle and not-so-subtle differences from every angle, some optional and some pervasive. There’s a subtle new scallop in the hood leading up to the windshield on all models that Porsche says harkens back to earlier 911s. Then there’s new available “LED Matrix” headlights that provided 84 finely defined elements in our tester, emanating a new circular ring to go with the four larger LED elements that have become a Porsche headlight staple in recent years.

This technology is similar to corporate cousin Audi’s laser headlight technology, which allows the high-tech LEDs to remain in high-beam mode at all times, automatically detecting cars and dipping the light to vehicles in front or in the oncoming opposite lane, their precise lighting pattern promising not to blind oncoming drivers, while still illuminating the gaps in between them with precise high-beam illumination.

Moving to its sides, you can no longer judge whether a 911 Cab is rear- or all-wheel drive by the width of its hips anymore, as all convertible models now feature the wider body that distinguishes all-wheel-drive (4S) coupe models. Both the front and rear ends are roughly 45 mm wider than before, with 20-inch wheels up front, and 21-inch rear wheels now standard.

But easily the largest design differences are at the rear, where there’s a much wider adjustable spoiler, which when raised up produces a whale-tail visual effect – more like a baby whale than a mama Turbo tail perhaps, but a whale tail for sure. That large moving spoiler covers up the new vertically oriented centre high-mounted brake light, so the underside of the spoiler has a modernly thin CHMSL integrated into it. 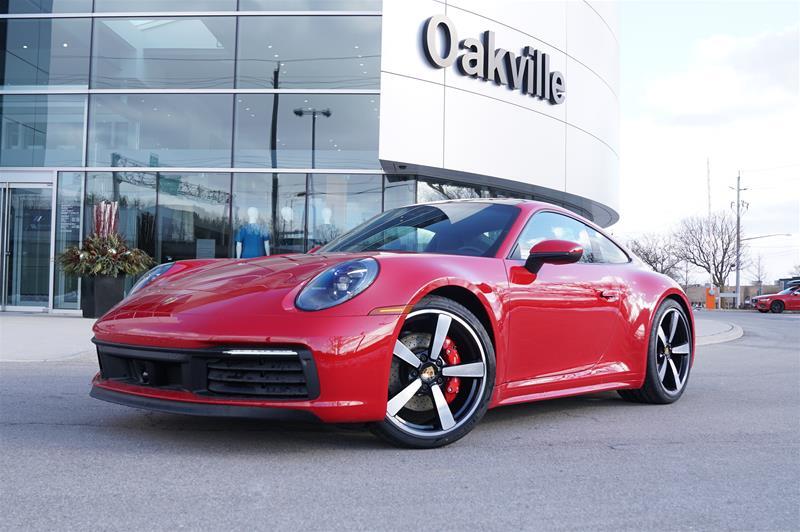 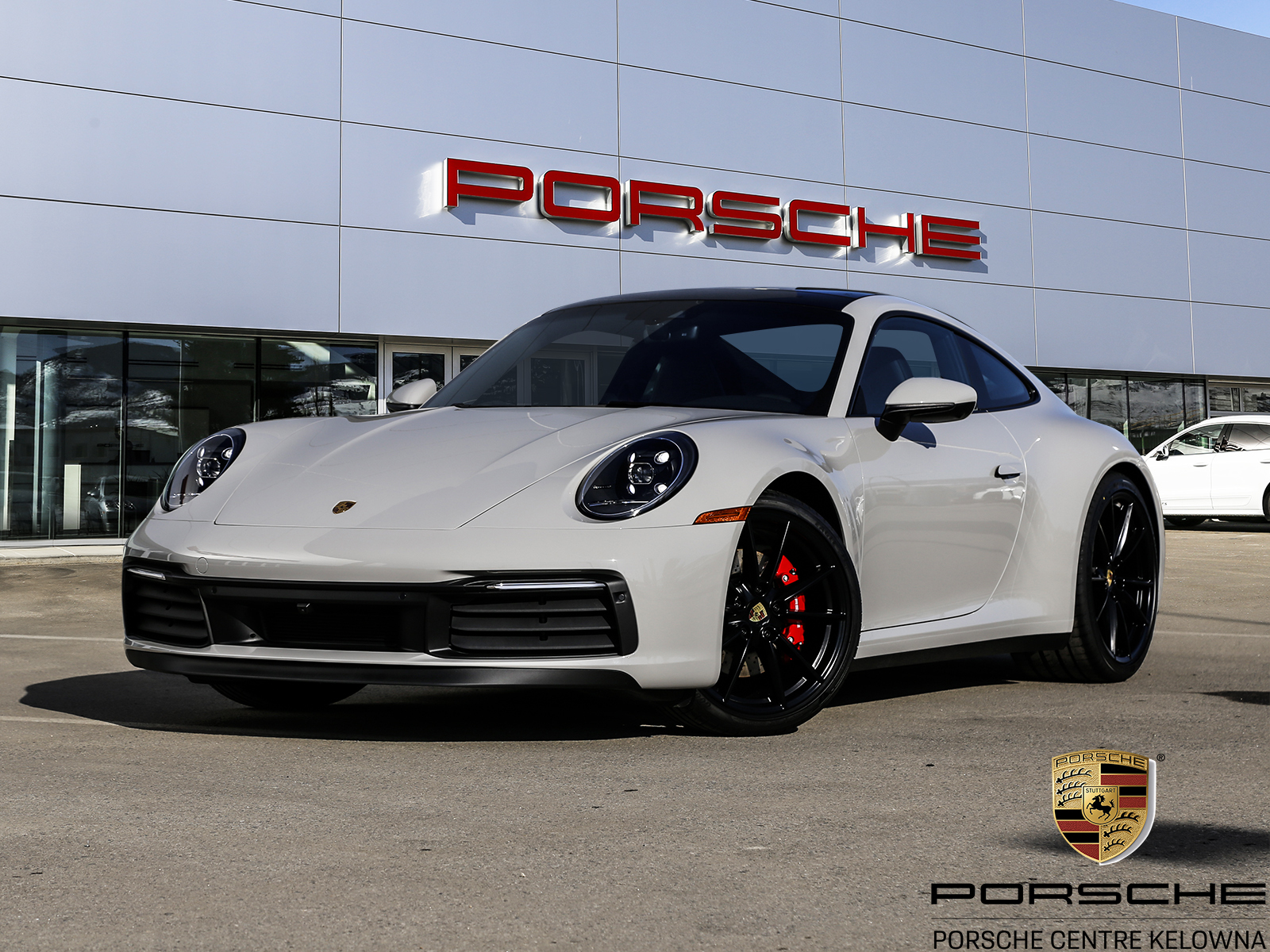 Inside, the 911 Cabriolet still starts up with an integrated “key” to the left of the steering wheel, in long 911 tradition, which instead of the button so common on other cars now, has a more traditional twist starting motion – perfect for lefties.

A keyfob-sized electronic shifter is a new twist to the 911’s interior, tipping forward for Reverse and towards the driver for Drive, and not hanging up annoyingly all the time for Neutral like some such shifters. There is now a button to put it into Park, and another marked M for full Manual mode, which allows the driver full control over shifts of the now-eight-speed PDK paddle-shifted transmission.

There’s also a prominent dial on the lower-right quadrant of the steering wheel on Sport Chrono-equipped models, as introduced on the Porsche 918 Spyder hypercar, that calls up different drive modes. There are the usual Sport and Sport Plus, where everything becomes increasingly louder and tighter from the driver’s seat, then Individual mode, where steering feel, damping firmness, transmission speed, and throttle response can be adjusted to suit the driver’s taste.

And then there’s the all-new Wet mode, which Porsche says uniquely detects the dampness of the conditions, automatically adjusts ABS and stability control settings, plus warns the driver, who can then select the new Wet mode through either the Drive Mode selector or on the screen for further driving security. Though we didn’t experience this mode in the rain, Porsche says it makes the 911 safer and easier to handle, while raising the rear spoiler automatically to increase downforce.

Once that integrated “key” is turned, the 911’s 3.0-litre twin turbocharged boxer-six engine lights up, a refined yet audible thrumming that only becomes noticeably aggressive when you twist it into Sport mode. There’s much less difference to sound and suspension firmness levels when moving from Sport to Sport Plus, though the latter does seem to bring out all 443 hp to the wheels the quickest, with its torque peak of 390 lb-ft coming in as low as 2,300 rpm.

A full throttle rip from low speeds is rewarded with a satisfying zzziiinnnnnngggGGG to quickly rid any cobwebs or temptations to glance at your phone or stereo or anything else distracting the driver from the rapidly disappearing universe. Official zero to 100 km/h acceleration times for the rear-drive 911 Cab S come in at 3.9 seconds, or 3.7 with the optional Sport Chrono and its launch control.

The added grip of the all-wheel-drive 4S version at launch somewhat negates the extra 55 kg it carries over the S, with respective times 3.8 seconds or 3.6 seconds using launch control.

The new eight-speed dual-clutch transmission is a joy to work, with crisp shifts that barely register as a blip when charging hard in anger, but allow for smooth shifts in about town daily driving. But I’m glad it offers a full manual mode, as it shifts so quick and smoothly that I caught it shifting up – likely to help save fuel – when I wished it wouldn’t, making the M button on the centre console a key one when tackling twisties.

Between Normal, Sport, and Sport Plus, I found myself in Sport most often, the mode where the engine was audible enough for constant companionship, but not aggressive enough to make one wonder whether the stability control was still engaged or not in some of the slippery corners we encountered.

Though there’s always the temptation to set the revs soaring and attack the various mountain curves we encountered, we also enjoyed less frenetic cruising in the 911 – perhaps just as important for many buyers. There’s a power-operated wind blocker that can extend up at the push of a button, settling over the two tiny and straight-backed rear perches. Combine that wind blocker with rolled-up windows, and we were able to keep a conversation going at normal levels even at (Canadian) highway speeds.

The power-folding soft-top itself is also slightly quicker, raising or lowering in roughly 12 seconds, and can do it while driving up to 50 km/h. There are still no air vents integrated into the seats as first Mercedes-Benz and lately BMW have adopted in their convertibles, and the relatively small front trunk won’t offer the practicality of some other convertibles out there. But then again, you can’t get any rear seats in a Corvette convertible, or in many of the 911 Cab’s other two-seat sports car rivals.

In the end, the reason the 911 has become iconic is not only that the 911 name and style has endured for so long, but also that this two-door somehow provides the design and driving fun impetus for all Porsche models, no matter how many doors or their cost.

Yes, the 911 Cabriolet is still beautiful, especially if you like the current one’s design now. Yes, it’s still quick, and even more so than before, but still with a horizontally opposed six-cylinder engine that sings an internal combustion aria that is like a mermaid’s song to enthusiast ears. And yes, it’s still a sparkling dynamic performer, with handling upgraded with some Porsche-worthy technology in the suspension of all models, yet all translating to a lovingly recognizable creamy precision to its steering.

It may not yet have the long-whispered hybrid powertrain available, one that Porsche executives discussed but didn’t promise at any specific point, yet. But for a glowing example of the cutting edge and the classically timeless, the 2020 Porsche 911 Cabriolet does a great job of moving forward, while staying the same.

About Michael Bettencourt
Michael Bettencourt has been writing about cars and automotive topics for over 25 years, with over two decades as a member of the Automobile Journalists Association of Canada (AJAC). A journalism graduate of Ryerson University, he has won multiple awards for technical, vehicle testing, and green vehicle writing. Currently a judge for the Electric Vehicle Dealer’s Association awards, he bought his first EV in 2011, and follows the EV industry closely.
Follow me
You may also like
AdChoices
Latest Articles
﻿