NOTRE-DAME-DE-LA-MERCI, QC – “Forgive me,” I said, laughing, as I hauled myself up into the driver’s seat, “but this thing is just so stupid!” The Nissan rep riding shotgun nodded his head in agreement. “Most of the really fun things usually are.”

Nissan hopes to capture the customer who might otherwise migrate to a crossover.

I’m about to drive an approximately two kilometre circuit carved into the woods north of Montreal, in a five-year-old’s ultimate fantasy, a life-size Hot Wheels-style concept vehicle mounted on gigantic tank treads. Vibrating violently, we charge down a sweeping left-hander, the tracks thundering on the hard-packed snow like a jack-hammer being dragged across a concrete floor. It’s probably more at home in fluffy powder (or the deep pile carpet of a showroom floor) but the Altima-te AWD concept has the tenacious grip of a mountain goat as we blast through the chicanes and come chugging to a stop.

An amusing diversion from a day spent driving new vehicles, but Nissan isn’t expecting you to buy one. The Altima-te AWD is a one-off prototype developed solely to promote the arrival of all-wheel drive in the mid-size 2019 Nissan Altima sedan.

At a time when many manufacturers are abandoning the sedan segment entirely, it’s fair to question what Scott Pak, product planning manager for Nissan Canada, calls “the highest investment ever for a Nissan platform.”

Despite the massive encroachment of crossovers, Pak believes there is still a market for those customers who prefer the ride height and styling that a sedan offers. By offering standard all-wheel drive, a first for a Nissan sedan, to Canadian Altima buyers, Nissan hopes to capture the customer who might otherwise migrate to a crossover.

The sixth-generation Altima is all-new, and rides on a stronger, wider platform that’s 19 kg lighter than the outgoing structure, with increased head, leg, and shoulder room. It also rides 2.8 cm lower, which combined with the wider track and all-wheel drive, bodes well for handling and cornering ability. Longer, sleeker, and with a bold V-shaped front fascia similar to the newly refreshed Nissan Murano, the Altima appears handsomer and more sophisticated than its predecessor. 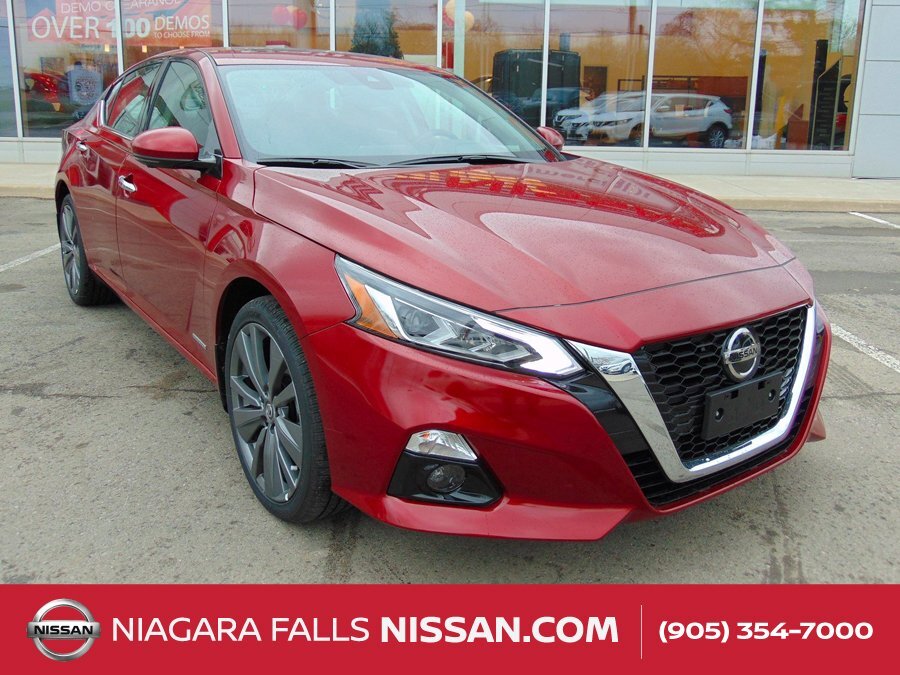 A hundred kilometres of winding, hard-packed roads, tunnelling through Tremblant’s towering snowbanks proved a satisfactory challenge for the new Altima’s handling abilities. The front-wheel-drive-biased car has “on demand” torque, distributed by Nissan’s Intelligent AWD to send as much as 50 percent of the power to the rear if needed. The system works imperceptibly, defaulting to front-wheel drive under normal conditions to save fuel, and can’t be deployed nor shut-off by the driver. At 7.9 L/100 km, fuel consumption is only slightly higher than the previous 7.5 L of the outgoing front-wheel-drive model.

It’s surprisingly nice to drive, cornering flat and with little dip or roll when braking. Although it lacks the steering feel and sparkling character to engage the driving enthusiast, the composure with which the Altima handles these wintery conditions is sure to inspire confidence for the average buyer.

To further evaluate the Altima’s grip and balance, we drove several laps of the icy Circuit Mecaglisse on studded tires and came away suitably impressed by its fairly neutral handling on the slippery surface. Part of that is due to the engine’s low placement in the front of the car, which helps with its centre of gravity. It’s an all-new 2.5-litre, direct-injection, four-cylinder engine, designed to fit within the engine bay of AWD-equipped vehicles. Unfortunately, the marvellous 2.0L turbocharged, variable-compression engine, which debuted in the Infiniti QX50, is only available on US-spec front-wheel-drive Altimas.

Output from the new 2.5L is an adequate 182 hp with 178 lb-ft of torque. Mated to a continuously variable transmission, it performs smoothly but the combination does tend to drone when pushed.

The sedan market may be shrinking, but it’s not dead yet. And with several competitors leaving for the more lucrative crossover segment, the new and improved all-wheel-drive Altima is well-poised to fill their spots.