Shoppers looking for a vehicle that offers decent ground clearance and all-wheel drive, along with room for a family and their gear may think that their list of requirements limit them to purchasing a large truck or SUV. The 2019 Volkswagen Golf Alltrack proves that one need not sacrifice fuel efficiency and agility for utility. My Peacock Green Metallic tester proved to be a refined and more than capable vehicle throughout impossibly treacherous winter conditions.

What more could Canadians ask for?

I picked up the vehicle just outside Montreal, a beautiful city that is famous for its rich and unique culture, vibrant nightlife, incredible food, and friendly people. It is also notorious for perpetual construction, potholes, and shockingly terrible drivers. It was not uncommon during my time there to witness trucks driving the wrong way down one-way streets or motorists crossing three lanes of traffic to make an abrupt turn without signalling. Despite its raised suspension, the Alltrack’s all-wheel-drive handling is agile and predictably balanced with limited body roll. Speed-sensitive power steering feel is smooth but communicative and is nicely weighted, while the proficient brakes proved their worth time and time again.

Compared to its stablemate, the SportWagen, the Alltrack sits 1.5 cm higher thanks to longer springs and dampers, but it also gets its own bumpers, body cladding, aluminum mirrors, and skid plates underneath. Anyone who has driven a Volkswagen recently will recognize the simple layout of knobs, buttons, and gauges that make setting climate controls or adjusting stereo volume easy. It may seem silly, but many manufacturers seem to unnecessarily complicate the process. Navigating the city’s many one-way streets to find the beautiful Fairmont Queen Elizabeth Hotel or visit various incredible restaurants during my stay was made easier by an intuitive 8-inch infotainment screen and navigation system which also provided directions and distances within the centre of the gauge cluster, so I didn’t have to take my eyes off the road for long.

What isn’t intuitive, is that engaging the Tiptronic shifting mode requires the driver to move the gear selector away rather than towards you. Selecting a higher gear requires you to push forward and reverse for lower – which is unintuitive and curious. Paddle shifters are mounted on the steering wheel, but they are small and feel cheap in an otherwise high-quality cabin. Small gripes from an otherwise enjoyable and engaging road trip experience. A six-speed manual transmission is also available, which I am anxious to try out since an all-wheel-drive wagon with a manual transmission is about as good a combination as you can get for a daily driver in my opinion.

Driving north east to Quebec City then further north to Chicoutimi, I encountered more snowmobiles than cars, through heavy snow, white-out conditions, and elevation changes – none of which reduced my confidence in the Golf Alltrack. 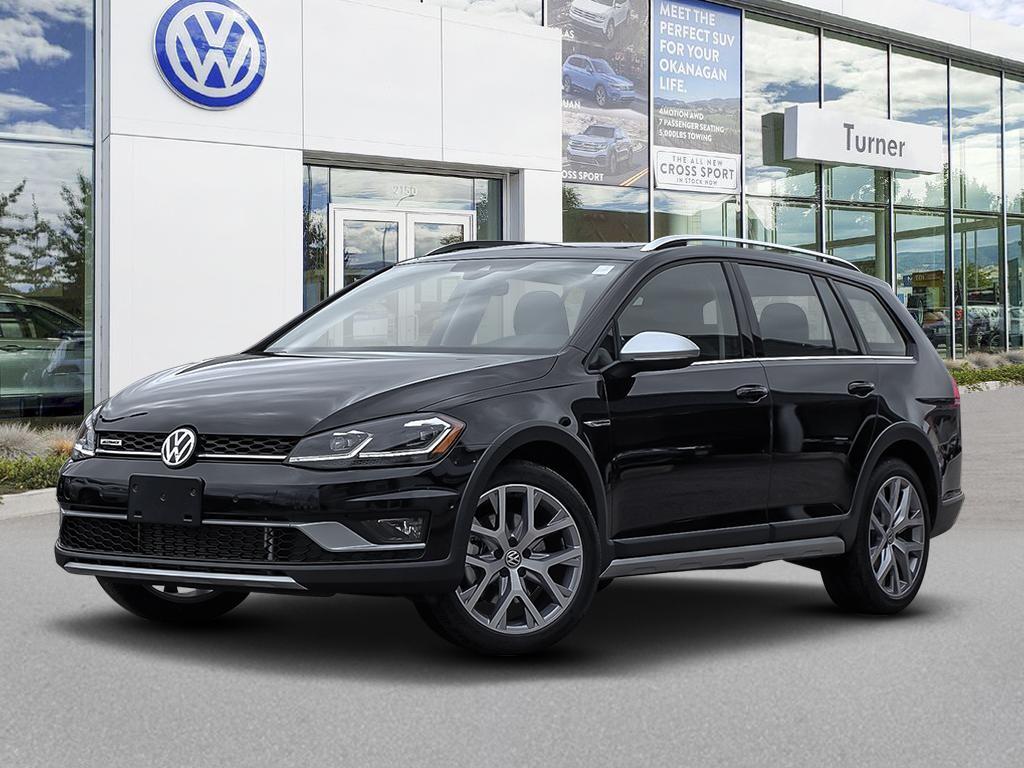 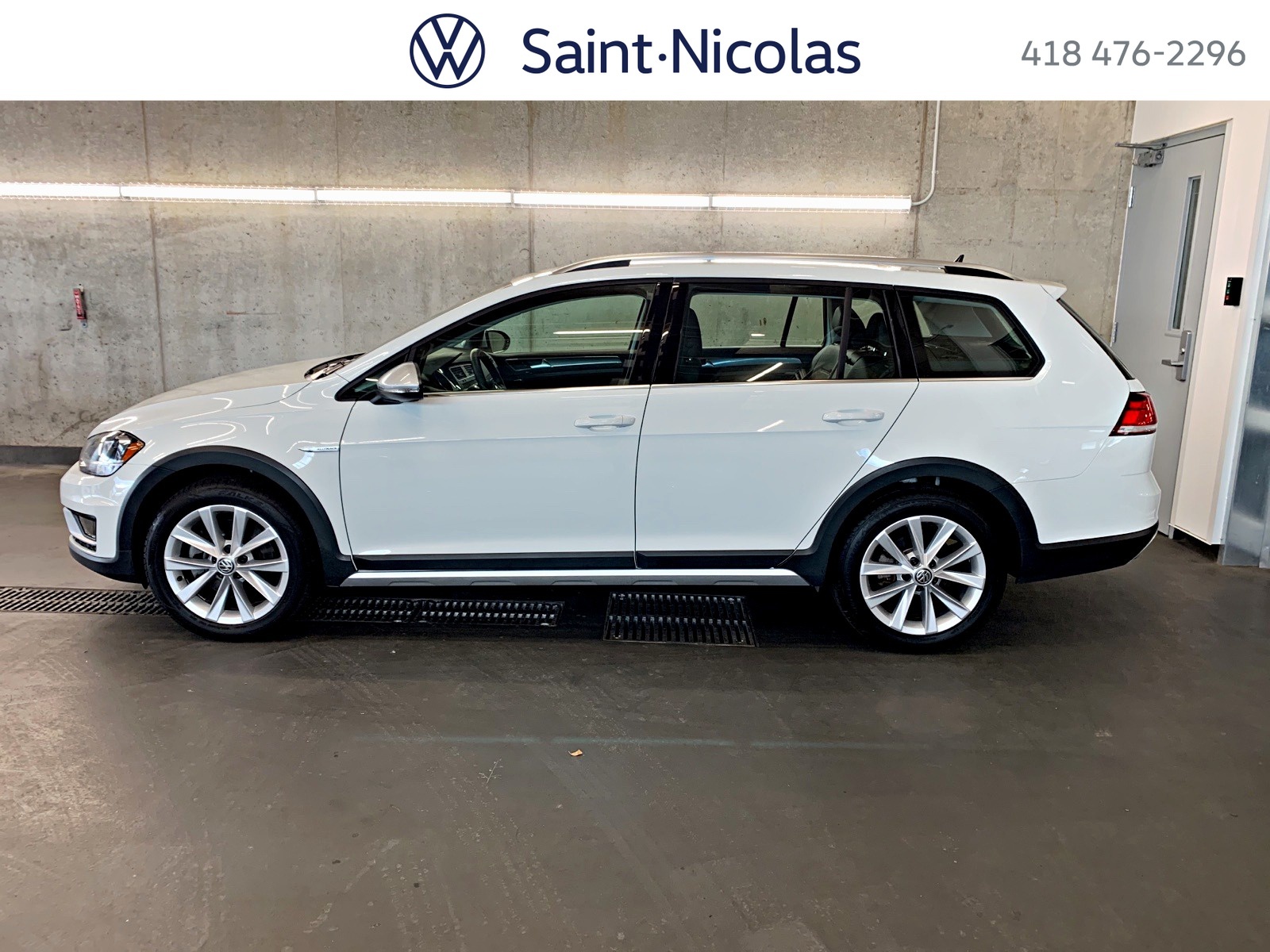 Despite poor weather, steep hills, and driving with a heavy right foot in Sport mode most of the time and using the DSG’s Tiptronic manual gear selector to optimize power; fuel consumption was impressively within spitting distance of its claimed rating 9.6 L/100 km.

The Alltrack’s standard turbocharged 1.8 L inline-four-cylinder engine delivers 168 hp, which doesn’t sound like a big number, but neither is the 1,552 kg curb weight. Acceleration therefore feels sprightly and more than adequate for the needs of most drivers. Chicoutimi had some seriously steep, snow-covered hills in town. Numerous times I found myself easily pulling around and passing big, heavy SUVs that were stuck spinning their tires on the slippery inclines. In addition to the aforementioned Sport driving mode which I used most frequently, the Alltrack also has an Eco mode as well as an Offroad mode, which isn’t found on other Golf models, that modulates throttle and braking input to retain traction in situations with steep grades or compromised traction.

The −30°C temperature Quebec experienced during my trip (not including windchill) definitely put the VW to the test. The cabin and heated seats warmed up quickly. Quiet and comfortable, the interior is well appointed with high-quality materials. The task of driving for 300 to 400 km at a time didn’t merit a second thought; in some vehicles seat comfort can be an issue after just an hour. Enjoyment of the ride was increased by the massive panoramic sunroof that creates a bright interior and the booming Fender premium audio system.

Introduced as a new model for 2017, active and passive safety features were added to the suite of standard equipment for 2019, including automated emergency braking, front-collision warning, pedestrian detection, blind-spot detection and rear cross-traffic alert. My tester also had lane-keep assist, a self-parking feature, and parking sensors. The integration of such technology left something to be desired: snow and road grime accumulating on the vehicle while driving caused incessant beeping from the parking sensors, which are controlled by a setting buried deep in the menus, and I had to pull over to safely find it.

The Execline package also features 18-inch Canyon Alloy wheels, a 12-way power adjustable driver’s seat, leather-wrapped multifunction steering wheel, Shetland leather seating with sport seats up front, LED headlights and running lights. Curiously, the Alltrack doesn’t have a power liftgate release or opener, which have become commonplace in the crossover/SUV game. Grabbing the rear VW logo to release and lift the tailgate involved getting road salt all over my hands or gloves. No doubt, it’s a first-world problem, but still not pleasant in the depths of winter in a vehicle with an MSRP of $36,670.

The cargo area is a decent size at 861 L (1,883 L with the seats folded down) and usable thanks to a large opening, fold-down seats, and a rear-seat armrest pass-through for skis or hockey sticks. What more could Canadians ask for? Likely the Alltrack’s closest competitor, regardless of whether either company will admit it, is the Subaru Outback. The Subie doesn’t have a rear-seat pass-through but it does have a towing capacity of 2,700 lb. The Alltrack could theoretically tow up to 1,500 lb if properly equipped, but doing so would void the warranty. Needless to say, it is not advised.

The Alltrack may seem like a big jump from the $24,400 entry price of the Golf SportWagen – and it is – but it also provides a great deal of value for those hard-earned dollars. It becomes an increasingly enticing expenditure when you consider the cost of buying (and fuelling) an SUV when you could easily get by with an all-wheel-drive wagon.

About Dustin Woods
Fascinated by anything with an engine since he was old enough to walk, Dustin has been crafting automotive news, reviews, and travel content for over 14 years. He holds an Honours Bachelor of Arts in Communications Studies and English from Wilfrid Laurier University and a post-graduate certificate in Broadcasting from Humber College. Dustin is the Associate Editor of autoTRADER.ca, a member of the Automobile Journalists Association of Canada (AJAC), and a doting cat dad.
Follow me
You may also like
8.4