Why are SUVs selling so well with Canadians?

If I could buy an X4 tomorrow, I would.

Because there are options out there today like this 2019 BMW X4, which I’d like to have parked in my garage as soon as possible, please.

I’ll take this precise M40i, in this Flamenco Red, with its deeply satisfying start-up snarl, Sport-plus mode spitting and crackling, and driving manners good enough to make you forget sedans ever existed.

I mean, it’s fundamentally impractical, which I’ll dig into momentarily. But I accept this. Very few of us have a mansion with an eight-car garage and therefore plenty of budget and space for supercars, G-Wagens or Range Rovers, and whichever other vehicles are at the very top of their game and may catch one’s fancy.

No, most of us get to have one car, two at most. Yet more and more Canadians have enough going for them financially to be able to invest a little more in making that primary car a good one.

With this new X4, owners can have one vehicle that’s fashionable, capable, and fast – a package that presents far less of a compromise than was the case with SUVs for so long. It does a whole lot of stuff, maybe not perfectly, but exceptionally well.

In short, if I had just under $80,000 lying around, I’d be shoving it at BMW like Fry in that long-lived internet meme. And then I’d probably grumble about a few things for as long as I owned it. But I’d still love it.

The new X4 has a whole lot in common with the new X3 that launched a little over a year ago. That means it has the same two models available, an xDrive30i and the M40i (which is also all-wheel drive despite not stating so in the name, although it’s more rear-biased here).

However, it comes with slightly lower power figures, almost negligibly so: the 30i’s 2.0L twin-turbocharged inline-four-cylinder engine comes in with 7 less horsepower for a total of 241 hp, while torque is the same at 258 lb-ft; while in the M40i, a 3.0-litre twin-turbo inline-six produces the same 355 hp as in the X3 version but 4 lb-ft less torque, 365 lb-ft all told, fully available between 1,520 and 4,800 rpm. The eight-speed sport transmission with paddle shifters is the same across the board.

What differentiates this from its equivalent peers, then, is the sound. When I first drove the new X3, I wrote that I thought Sport-plus mode might be a little too much. After spending a few days in the X4, I’d like to back out of that statement a touch. Yes, the gearing is aggressive, but I found myself switching to it often anyway just to hear the crackling and popping of the exhaust. This has to be one of the best-sounding SUVs ever.

It certainly was a fun one, though. The pointed steering, exceptionally flat handling, and overall dynamism of this car is fantastic, and that’s even before factoring in that it’s an SUV. This comes in no small part due to its 37 mm wider track and 54 mm longer wheelbase than the previous generation, and what BMW says is a close-to-perfect 50–50 front-to-rear weight distribution. 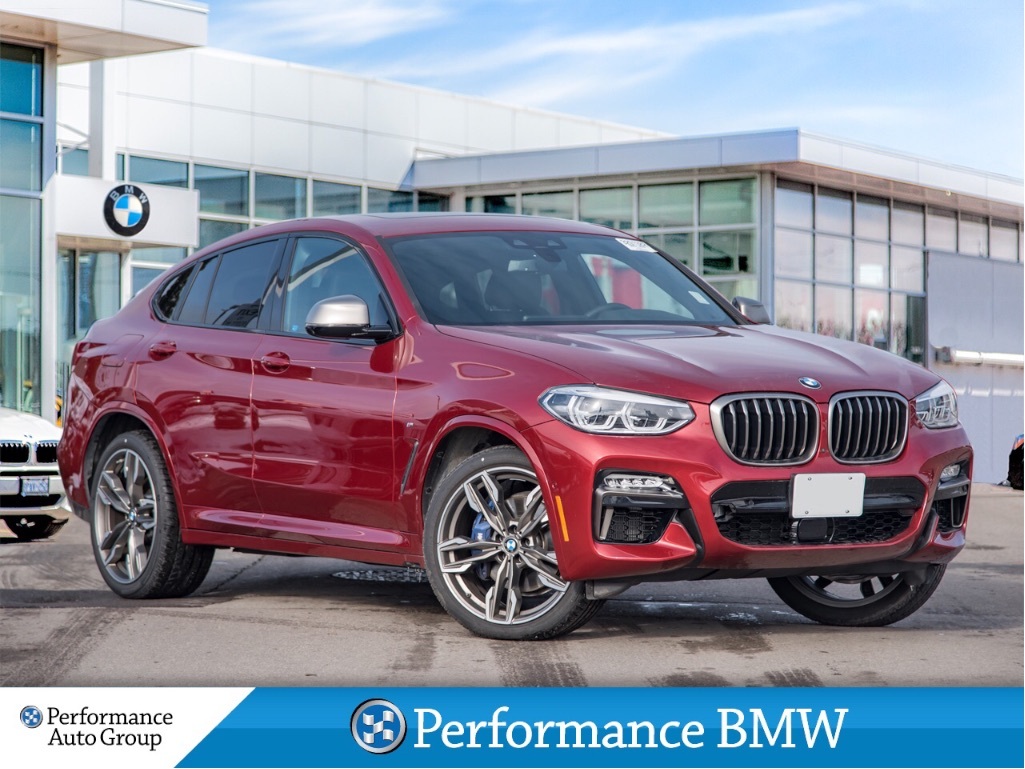 An X3 in Heels

But none of this does much to explain what most people will see as the differentiating factor of an X4 over its X3 sibling and its competitors: in this segment, style is everything.

Basically, if you love BMW’s exterior look, or not, that’s just the way it is. The X4 still has that signature kidney grille, used in an appropriately larger proportion here, and a distinct front-end shape and door accents. I happen to love it, but it’s not for everyone. What’s interesting to take a closer look at is the wheel wells, which like the X3 are not rounded anymore but are instead subtly squared off, giving it the appearance of a more aggressive stance. The welcome lighting with its swoopy design is a nice touch, too.

But it’s on the inside where the X4’s strengths really shine – and its shortcomings.

The good: excellent leather-wrapped sport seats with great hip support and side bolsters, and optionally stitched with a classy M Sport coloured accent on the piping; the gorgeous digital gauge cluster (which, admittedly, comes as part of a rather expensive premium package, though it should be pointed out that packaging is disarmingly simple on the X4 versus BMWs of the past); and an enormous panoramic sunroof.

The not-so-good: that coupe shape, sexy as it is, does force you to live with a few compromises. For one thing, the rear window is quite small, so much so that it doesn’t have a wiper and looks like there isn’t room for one despite the fact that it still really needs one. Adjusting the side mirrors well mitigates most of this problem, but ensuring you’re properly absorbing your surroundings takes some getting used to.

And then there’s the matter of cargo space. If you’re considering a coupe, it’s inevitable that you’re going to be able to carry less stuff. The penalty applies here, though perhaps not as much as you might think. With the second-row seats up, you lose 25 litres of cargo space for a total of 525 litres, which isn’t really terrible, all considered. It’s closer to 200 litres once you drop the seats down, for a total of 1,400 litres versus 1,600 in the X3. That’s very similar to the GLC’s figures, though, so it’s on par with its direct competitors.

The bigger detriment I find with this design – and again, this is no different than any other coupe SUV – is just that there’s not much of a sill on the rear bumper to set down a box or something if your hands are full so that you can free up a hand to open the liftgate.

Don’t Own an Android, and Don’t Talk with Your Hands

Let’s get this out of the way: I’m a committed Android owner, so were I also committed to owning a BMW, I’d have to accept that I’d be out of luck as far as smartphone connectivity goes. Truly, I enjoyed this car enough that I’d probably buy it anyway, and that’s a rarity. (Besides, the only thing similar that does have Android Auto is the SQ5 – which, again, isn’t a coupe.)

If you’re an iPhone owner, though, there’s no need to make such sacrifices. And the rest of BMW’s current infotainment system is one I quite like using. I enjoy the ergonomics of the dial input, and I appreciate how flexible the display is in allowing satellite radio stations to be displayed by channel name, current song title, or current artist.

BMW wants to make a big deal of its gesture control technology, which allows the driver to use hand motions for things like changing the volume or the radio station. I’d much more readily take a thoughtfully designed grid of dials and buttons any day, and I don’t think of myself as the sort who’s generally resistant to progress. There’s something more grounding about making contact with something when you’re trying to adjust it – well, that and I talk with my hands, and changing stuff by accident is annoying.

With SUVs like this on the market, it’s no wonder that sedan sales are shrinking. To me, the new X4 strikes the perfect balance of performance, comfort, luxury, and fashion. Yes, there are some things about it that make it less than perfect, but in this car I would choose to live with them. This is a phrase I don’t utter lightly: if I could buy an X4 tomorrow, I would.

About Stephanie Wallcraft
Stephanie Wallcraft is the child of an auto worker and honed her passion for cars in the grandstands of the Molson Indy Toronto. Today she continues the family tradition by writing about cars and motorsport for publications across Canada.
Follow me
You may also like
8.3