While much of the 2019 Honda Pilot remains the same at the core, three years after the current generation’s debut, it’s got a new front end more in keeping with the rest of Honda’s lineup, denoted by the more heavily chromed grille and new headlight shape. How you feel about it depends on whether or not you think an aggressive fascia like this belongs on a seven-person crossover or four-door sedan such as the Accord. I find it unique and, indeed, ask any designer and they’ll tell you that SUVs and trucks are some of the hardest vehicle types to style.

Honda simply knows what it’s doing when it comes to moving families comfortably.

The first thing I noticed upon stepping in was how the door closed: a satisfying “clunk” that is a hallmark of the best luxury cars. This may be the top-spec Touring model, but I’m hard-pressed to call it “luxury” necessarily; Honda has Acura and its MDX for that. Still, a good door close is a good door close, and that’s all there is to it.

Once inside, I found myself greeted by some nice, airy cockpit environs. Even though my car had the Blu-ray rear-seat entertainment system that comes standard on the two Touring models, Honda has managed to fit two sunroofs in there – that’s what you get, I guess, when you’re dealing with almost 5,000 mm of overall length. You’re also dealing with 1,794 mm of overall height, so even with the sunroof there’s plenty of headroom, to the tune of 1,004 mm in the front, 1040 mm in the second row, and 810 mm in the third. Thanks to that headroom, me and my 6'3" frame had no problem with the third row, headroom-wise; legroom’s a bit of a different story, but even still, this particular third row is one of the better ones I’ve felt in the legroom department.

Since my car had the 7P (“P” for “Passenger”) package, the second row gets captain’s chairs. These are nice because you get a grippy storage pad between them, but also because it makes the third row more accessible and since you can slide and tilt each seat independently, you don’t have to sacrifice the comfort of both (or all three – yes, there are seatbelts for three back there) third-row passengers if you want a little more second-row legroom, and vice versa. Nonetheless, the Nissan Pathfinder beats the Pilot when it comes to third-row accessibility thanks to its tilt-and-slide seating; on the Pilot, even if you do tilt the seatback and slide it forward, getting to the back is no easy task. Would be fine for kids, of course, but I would imagine it would be tough to get a child’s seat back there, should the need arise.

Of course, huge as it is, if you just leave that third row folded, you have access to 1,583 L of cargo space through a new hands-free foot-activated liftgate, and a colossal 3,072 L of space with all seats folded. That’s down not even 1,000 L on the max offered by Honda’s own Odyssey minivan. Not bad.

Back up front, while there’s obviously a massive amount of room behind you with all that space, it’s quite easy to keep an eye on things without turning your head thanks to the bus-like CabinWatch convex mirror mounted to the sunglass holder above the mirror. It’s incredibly clear, and makes that huge cockpit seem much smaller than it is. I used it a ton with my family in the car; and it’s nifty stuff like this, or the way the third row so easily folds with the tug of a two-foot long cable mounted to the seatback, or the deep below-floor storage behind the third row (wish the cover was on hinges, however, and not free-floating as it is) that shows that Honda simply knows what it’s doing when it comes to moving families comfortably.

Not to worry, drivers – 2019 sees the addition of a bunch of stuff for you, too. It starts with a new digital gauge cluster on all trims, and it can be modified by more comprehensive buttons mounted to the steering wheel. Both the driver and front passenger, meanwhile, will benefit from the all-new Display Audio infotainment system which, among other things, sees the addition of a 4G LTE hotspot and… a volume dial. It’s the latest model to get one, as Honda continues to try and improve its infotainment system across the board, which has received its fair share – perhaps more– of criticism over the last few years. 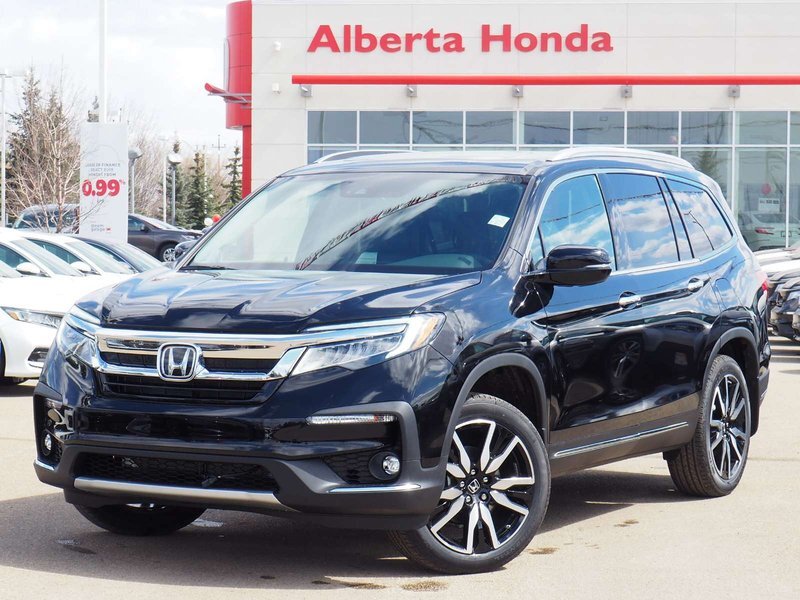 The 8-inch touchscreen interface can be manipulated much like your tablet or smartphone can – swipes, pinches, etc. – or you can make it look exactly like your favourite tablet or phone thanks to Apple CarPlay and Android Auto compatibility across all trims.

A note on that: in my experience, Hondas have been pretty good when it comes to smartphone pairing – I’ve faced fewer pairing issues or app functionality issues in Hondas than virtually any other brands I’ve tested. And so it went with the Pilot – at first. Then, one day, the system just flat out refused to recognize my phone. Just like that, out of the blue, it wouldn’t work. I tried different phones, messed around with the settings on both my phone and the car, tried different cables – nada. An “Apple CarPlay is unavailable” message, and that was it. Kaput. Annoying, to say the least – this kind of stuff in important at this level. Heck, it’s important in most all car segments these days. Great when it worked, though, to be sure.

One smartphone-related thing you don’t need CarPlay or Android Auto for, however, is the CabinControl app. It allows control of systems such as rear-seat climate control, or rear entertainment via Wi-Fi. That means if you can’t reach the controller, for example, you’ll still be able to control the television, or select a different audio source. The most useful add that I can think of, however, is the ability to send directions from your phone’s map app directly to the car, even while moving.

The other side of the electronics spectrum – that is to say, the driver aids – remain the same at the Touring level (automatic emergency braking, forward collision warning, lane-keep assist, adaptive cruise, blind spot warning system, rear cross-traffic alert), but base Pilots now get all of that save for the rear cross-traffic alert as standard.

Driving-wise, not all that much has changed; power is the same at 280 hp and 262 lb-ft of torque, channeled to all four wheels via a nine-speed auto on the Touring trim and up; LX/EX/L models get a six-speed. The nine-speed has been refined a little for ’19, boiling down mainly to its selecting second gear to make for smoother starts, if the conditions allow for it. If you ask me, however, it could use a little more refinement.

It’s a button-activated system, which is fine for reducing clutter and so on but the delay from when you press the button to when the gear is selected was such that I found myself playing closer and closer attention to the in-gauge gear indicator the more I drove the Pilot. It could be a case of my brain thinking the gear is being selected more slowly than in a conventional lever-activated system because the act of pressing a button takes less time, but that’s a bit of a stretch. I’d like to see this sped up.

Speaking of sped up: once you do get the gear to engage, pick-up isn’t bad for a people-moving seven-seater. You’ll never get Dodge Durango Hemi-like push from it, but in the theme of moving families along smoothly and comfortably, the Pilot is just about right. The only time I really found myself wanting a little more was during steep climbs. The 13.8 L/100 km we saw over about 350 km of combined driving isn’t horrible, though it sits closer to Honda’s claimed city figures than combined figures, even with the “ECON” button pressed when in town.

Otherwise, body roll has been pleasantly reduced even though it’s got all that mass to contain. Its well-weighted steering does a good job of metering out road imperfections without completely numbing everything. I like that, and I’m always looking forward to sampling Hondas because I know what to expect from their steering. In that regard, the Pilot is no different. The view out from all angles is also such that you get a better indication of how much steering lock you’ll need for any given turn, though I did find myself checking the wing mirrors quite regularly thanks to that long wheelbase, and my not wanting to shave a layer of paint off in an underground.

The thing about such a big vehicle, however, is there’s lots of surface area inside for sound to bounce off of. As a result, road noise is omnipresent (winter rubber doesn’t help, of course) as it bounces throughout the cabin. Bigger bumps that made the Pilot feel a little more brittle thanks than it would otherwise thanks to more cowl shake; as I alluded to before, the Acura MDX is a big seller and you can bet that they wanted to make sure that something with a Honda badge on its hood doesn’t show up its luxury cousin too often.

You won’t get many more complaints past that from me, however. If you’re looking for a convincing alternative to a minivan, the Pilot has to be very high on your list. Room for seven (or eight, depending), tons of in-car storage and a suite of technologies that ensure that not just the drivers are happy, but their families, too because that’s just as important at this level.

About Dan Heyman
Dan Heyman is a car guy through-and-through, ever since his first word was “Toyota”. Dan has worked as a full-time automotive journalist since 2010.
Follow me
You may also like
7.8