The 2019 Chevrolet Blazer is being built in Mexico.

Therefore, no matter what is written here about its performance, features, price, or anything else, the comments section will inevitably be lit up with GM employees and their supporters telling everyone not to buy it.

On a personal level, I’m deeply torn about this. On the one hand, I understand that Unifor is doing its job by standing up for Canadian auto workers and declaring a boycott of Mexican-built products in response to the automaker’s decision to close its production facilities in Oshawa. My dad was a member of Unifor for nearly 30 years, so I get why unions are important, and I’ve seen first-hand how real people’s lives are affected by people making a conscious decision, or not, to buy Canadian-built vehicles.

But on the other hand, business is business. No corporation will, or should, carry on forever down a path that’s unprofitable, and attempts to compel them to do so are naïve at best. Since this whole kerfuffle started in late November, I’ve often thought to myself that the massive amounts of energy and resources being poured into fighting to keep Oshawa open would be put to better use by finding ways to retrain workers for jobs that are more sustainable in the long term.

At any rate, my job is to tell you my thoughts on the new Chevrolet Blazer after driving it for the first time, and to do so free from influence from these factors, so that’s what I’m about to do. What you decide to do with this information is entirely up to you. If “the VIN starts with a 3, so it’s not the car for me” is a slogan that speaks to you, then you have every right to vote with your wallet.

As for taking the new Blazer on its own merits: it’s an all-around solid vehicle with one potential drawback that stands out.

Where Does It Fit?

Chevrolet brought the Blazer name back not because it’s keen on a return to body-on-frame, but because this five-seat crossover kinda-sorta sits in a similar place in the lineup to the legacy version were it sold in today’s market.

That means it slots into the brand’s lineup between the slightly smaller five-seat Equinox, which will continue to be built at CAMI in Ingersoll, and the seven-seat Traverse. That puts it in direct competition with the Ford Edge – which is built in Oakville, by the way – plus the Nissan Murano, the new Hyundai Santa Fe, the Jeep Grand Cherokee, and the Toyota 4Runner.

Blazer hits the market with two engines, a 2.5-litre four-cylinder and a 3.6-litre V6, both naturally aspirated and paired with a nine-speed automatic transmission.

I drove it for all of 10 minutes in a base-model Blazer, during which time I found that it has a nice feel for casually getting around town. The transmission’s low-end gearing helps to give it some launch energy, and the engine start-stop function is very smooth. However, it does start to feel overworked on highway egress and higher-speed overtaking. Since this will only be available at entry level and with front-wheel drive, it’s not likely to sell a lot in Canada anyway.

The 3.6-litre offers a significant power jump, going to 308 hp and 270 lb-ft of torque, though as is typical for a naturally aspirated engine, the threshold for reaching that band is high at 5,000 rpm. Still, as with the smaller engine, the nine-speed automatic makes getting closer to it easier and keeps things feeling active and ready to go at lower speed. The throttle response is on the relaxed side in normal mode, but switching to sport mode picks things up nicely. Its engine note is satisfying – it’s a touch short of exhilarating, but that’s not what a mid-size SUV is really for – and as with the smaller mill, the engine stop-start function does its job seamlessly.

Active cylinder deactivation, which shuts down two cylinders in cruising situations such as on the highway, helps keep the fuel figures in check. With front-wheel drive they come in at 12.0/9.0/10.6, and with all-wheel drive they land at 12.7/9.5/11.3. The Murano does considerably better than this, albeit for less power output (11.2 city/8.4 highway, 260 hp/240 lb-ft from its 3.5-litre V6 with a CVT), but the Blazer is otherwise essentially on par with its competition.

The four-cylinder engine has a towing rating of 1,500 lb, just enough to get some small toys around. The V6, on the other hand, can tow up to 4,500 lb with the heavy-duty towing package equipped, which is higher than average and might be just the thing needed to win a few buyers over.

Regardless of how it’s equipped, the new Blazer benefits from a track that’s widened and pushed closer to the corners of the car than its Cadillac XT5 platform-mate, along with high-rate suspension springs and large-diameter stabilizer bars. The result is a stable and flat handling quality, even in the base model. That said, the ride quality in this one is on the rougher side.

In the RS it’s a fair bit smoother, which is counterintuitive when you find out it’s got sport-tuned dampers. Those add 40 percent more compression control in the front and 15 percent more in the rear. This and the rack-mounted belt-drive steering, which is tuned to a lower ratio for this sport-oriented trim than the other models, give it a drive feel that improves the harder it’s pushed. Is that a great quality in a family SUV, though? The baseline differences between the RS and entry-level models aren’t as pronounced, for what that’s worth. Where it does provide an advantage is in the all-wheel drive system, which is a single-clutch in most models but a twin-clutch on the RS.

According to research provided by Chevrolet, shoppers in this segment consider styling to be their number one purchase consideration.

If that’s true, then the Blazer could hit some marks. This is one seriously tough-looking SUV. The headlight interpretation fits well with other newer Chevy products like the latest Silverado, but it does so without coming across as quite so eccentric. I’m an especially big fan of the Blazer’s shoulder line where it sweeps upward to follow the shape of the floating roof, leaving space below for an accented hip. Details are a wonderful thing.

The interior leaves an impression of quality as well, even in the base model. There’s not a lot of hard plastic here. Materials have a pleasant feel to them, including the cloth seats. Although one can’t help but look at the circular air vents and see them as very big swing at simulating a certain German luxury brand, there’s a nice functionality to them: twisting the ones at arm level in the centre console delivers a convenient and eyes-free temperature adjustment.

That said, there are a couple of missed opportunities here. I was surprised to find that the pedals are rather average, even in the RS model, and the floor mats are unbranded and on the plain-looking side. They’re inexpensive ways to make an impact on first impression, and they were conspicuous in their absence.

GM’s infotainment already stands out for its usability and standard access to Apple CarPlay and Android Auto functionality. If you’re spending a little more on a Blazer to get into a premium trim and are then also willing to spend on a package, there’s a new feature that tech-heads might appreciate. It’s now possible to create a driver user profile that becomes tied to your key fob and can transfer key information like your preferred home screen setup, radio presets, in-car apps, and safety feature settings between other Chevrolet vehicles that have the same feature. It requires data connectivity since the transfer takes place through cloud computing, the on-board app store isn’t fully equipped in Canada just yet, and it’s not widely available enough yet to give most households much product selection if they want to make use of it, but it’s an interesting step in a future direction.

On an extremely practical note, the screen in the Blazer seems more reflective than average and is positioned very upright. My co-driver was wearing a white name badge, and when sunlight shone on it the reflection was so crisp that I could almost read his name off it. We were enjoying the San Diego sun, so this might not always be quite so stark, but it’s worth keeping an eye out for on a test drive to see whether you feel it might bother you.

All in all, the new Chevrolet Blazer is an attractive vehicle that drives well and has solid capabilities and desirable features.

There’s just one problem: it seems expensive for what it is. To get certain features that buyers look for in Canada such as a heated steering wheel, you’re looking at the RS or Premium models, which have an MSRP of $46,400 and $48,800 respectively. A Nissan Murano Platinum starts at $46,520 with freight and PDI and feels similarly fashionable with better fuel economy, and several competitors offer desirable features at more affordable price points. Even a Ford Edge ST is not a whole lot more expensive than the RS at $51,089 with fees before discounts, and its performance chops and power output of 335 hp and 380 lb-ft of torque outstrip it.

If Chevrolet is right and most buyers are charmed by the Blazer mostly on its face, it could do well. But digging a little deeper – whether you choose to put the politics aside or not – makes it harder for the value proposition to hold up. 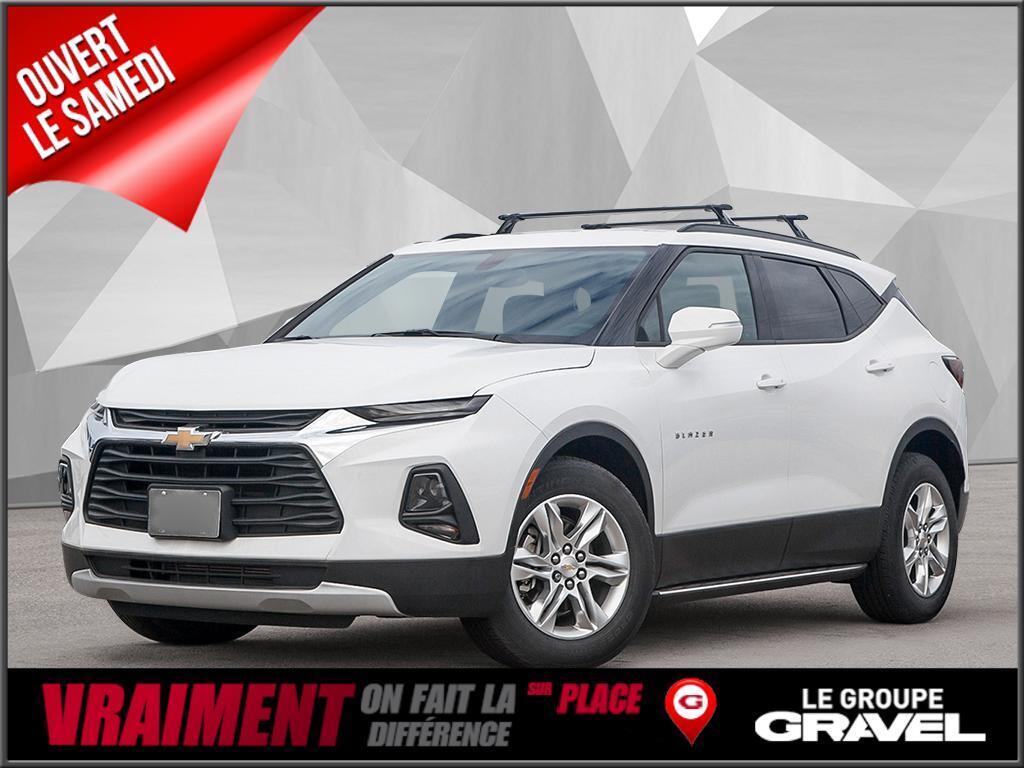 This is the point where most Canadians will start being interested. It adds the single-clutch all-wheel drive system to base 3.6 trim and adds a heavy-duty cooling system, hitch guidance, and trailering equipment with trailer sway control.

This is the only model that comes with the twin-clutch all-wheel drive. Over the True North Edition, it also includes a unique grille and exterior accents, 20-inch trim-specific wheels, an 8-inch digital gauge cluster, perforated red-black leather seats with RS accents, a heated steering wheel, a 110-volt outlet, ambient lighting, a gesture power liftgate, and a rear cargo management system.